The Société Parisienne d'Édition or SPE, was a French publisher that existed under various names from the end of the 19th Century.

MONDIAL AVENTURES  ("World Adventures") was their own version of Gilberton's CLASSICS ILLUSTRATED.  The series ran 30 issues from 1954 to 1959, including the works of such notable writers as Fenimore Cooper, Victor Hugo, Alexandre Dumas and Robert Louis Stevenson;  oddly enough, especially given it was a French company, they didn't include Jules Verne in their run.  However, they did one story by Edgar Allan Poe-- his ONLY full-length novel!

...seems to be one of the less-popular of Poe's stories, at least as far as comic-book adaptations are concerned, despite it apparently being an influence on a number of more-famous stories that followed it, including an actual sequel written by Jules Verne!

Ocean-going travel was always potentially dangerous in Poe's time; this is clear in each of the various stories he wrote that involved sailing ships:  "The Oblong Box", "MS. Found In A Bottle", and "The Descent Into The Maelstrom".

As of 11-6-2019, I've discovered the existence of 6 comics adaptations of "PYM".  This 2nd one featured the art of William & Yves Groux, and as far as I know, has only been translated into Portuguese.

I have fellow fan Don Bearden to thank for letting me know of the existence of this comic in the first place.  Since he told me about it, I found ONE copy on sale from a site in Luxembourg-- but it disappeared before I was able to get it.  As a result, I set up this page as another "place-holder" until I did get ahold of a copy of the book-- or at least, SCANS of it.

Meanwhile... I know this comic is of French origin... how, then, can a foreign reprint have an earlier date?

Don Bearden supplied the answer to this little mystery:

(Honore de) "Balzac's THE TENEBRESE AFFAIR, which was prepared in France in 1955 with Rene Giffey artwork, but somehow did not get published in France (May,1956)...the French series stopped ended (temporarly) in 1955, but several titles had already been sent to Brazil, so several titles were actually issued in Brazil before they were issued in the original French MA (MONDIAL AVENTURES) series."

How's that for screwing up the dates of which was the original and which came next?

And my patience paid off.  Don got back in touch with me on October 1, 2016, saying he'd FOUND scans-- of the Brazillian edition-- and e-mailed scans of the entire book.  As he put it, "We were both beginning to think this one might never turn up!"  As a result, he asked me if I could tackle this one as soon as possible... which I am doing, having just finished the 1968 French digest version of "RUE MORGUE".  Since the Brazillian edition was printed in B&W, that means I "get" to add COLOR.  From one massive project to another... here we go!  ENJOY. 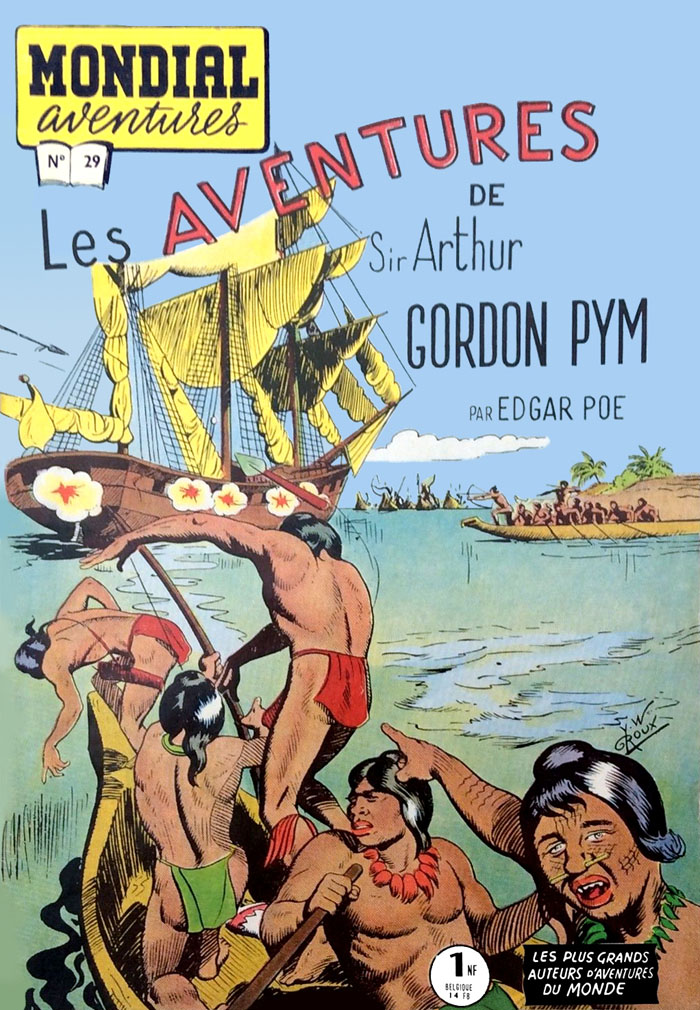 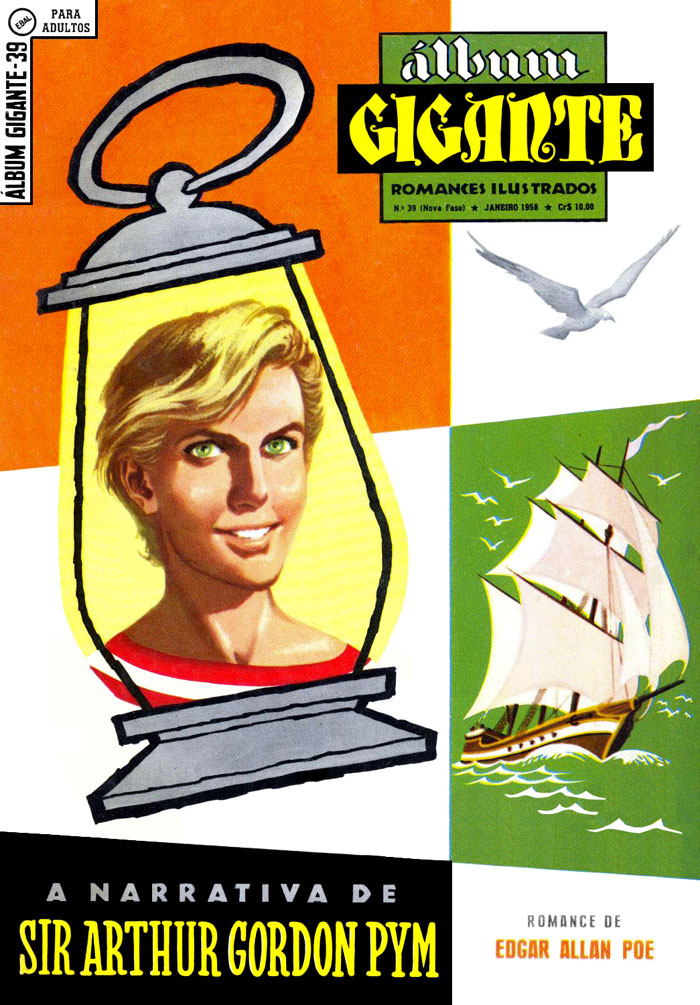 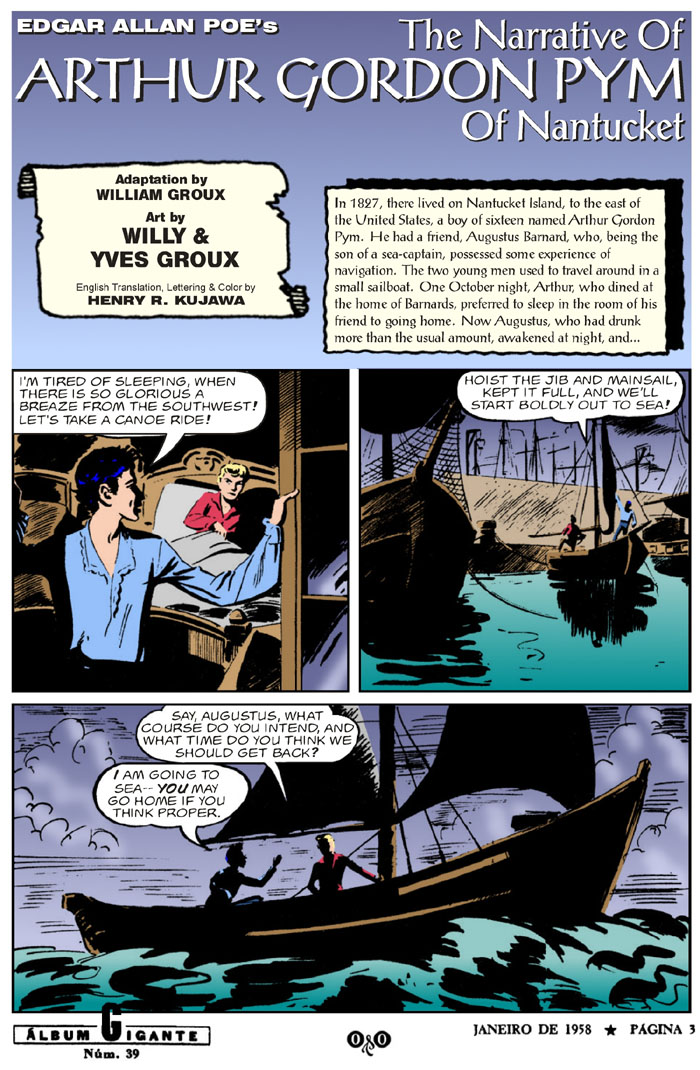 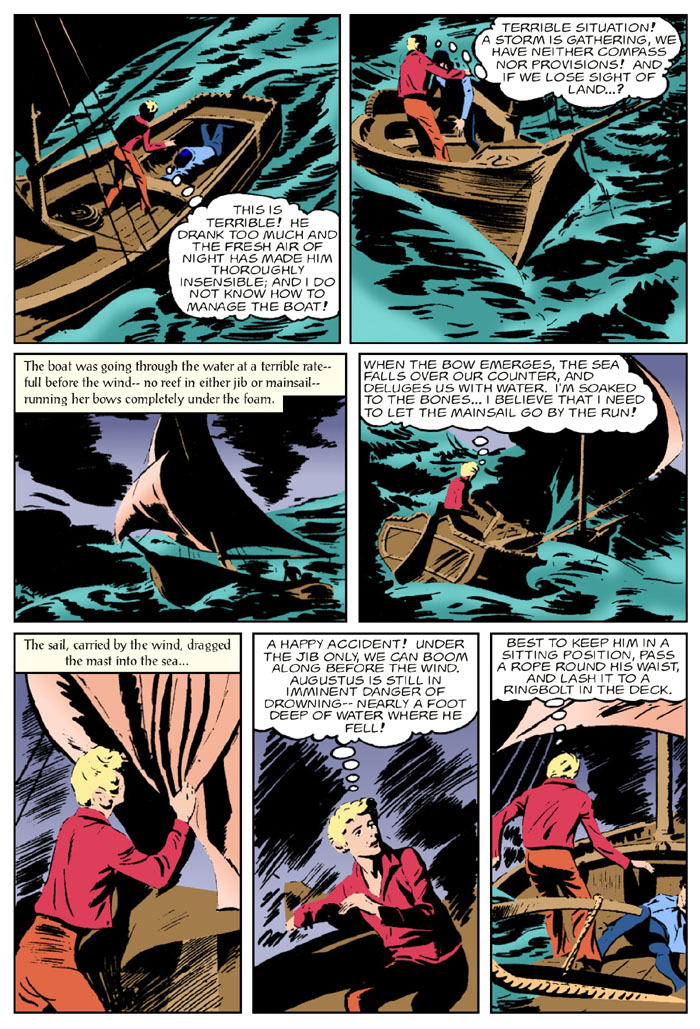 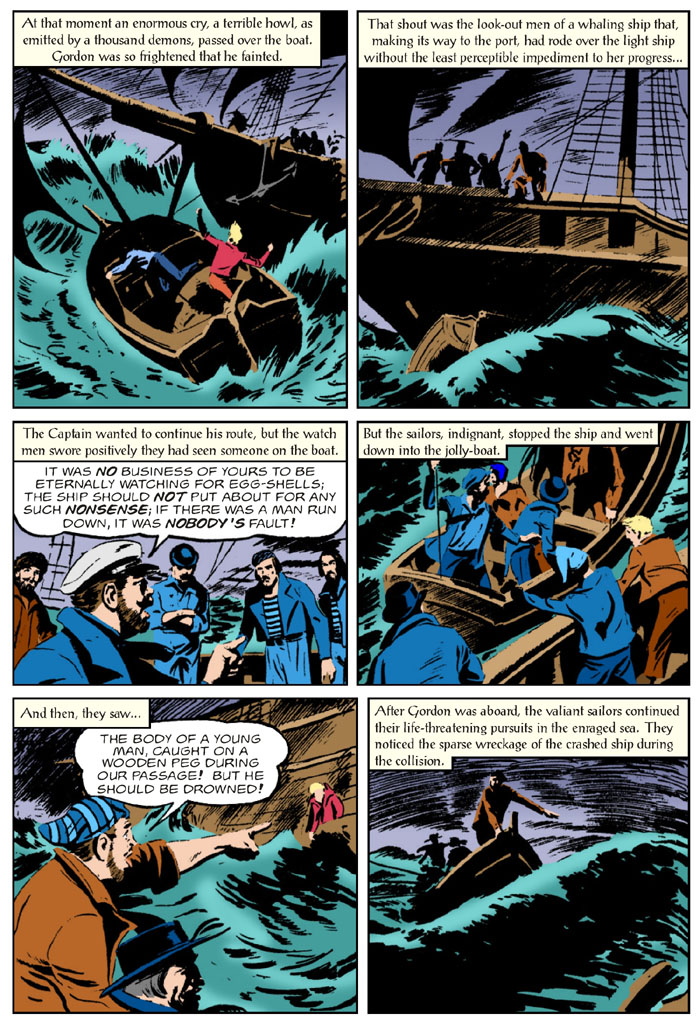 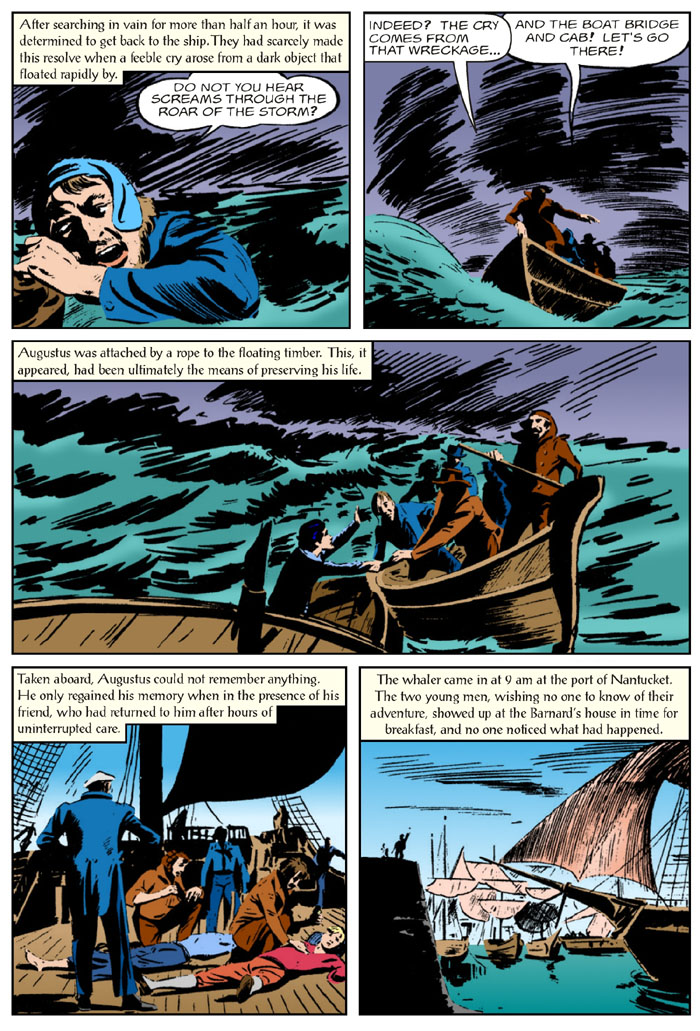 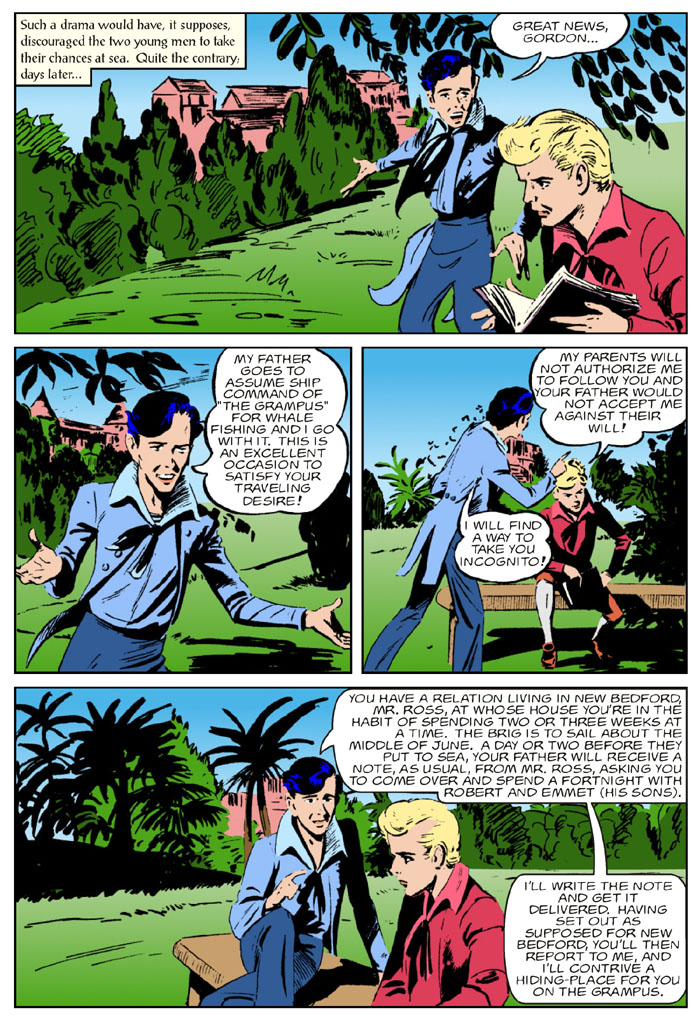 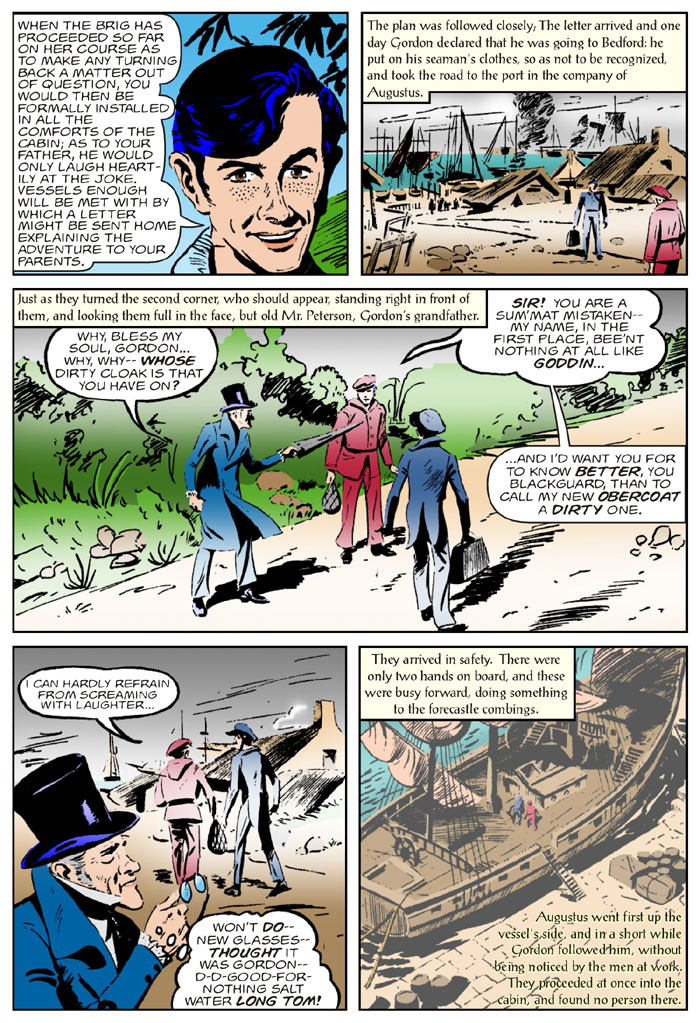 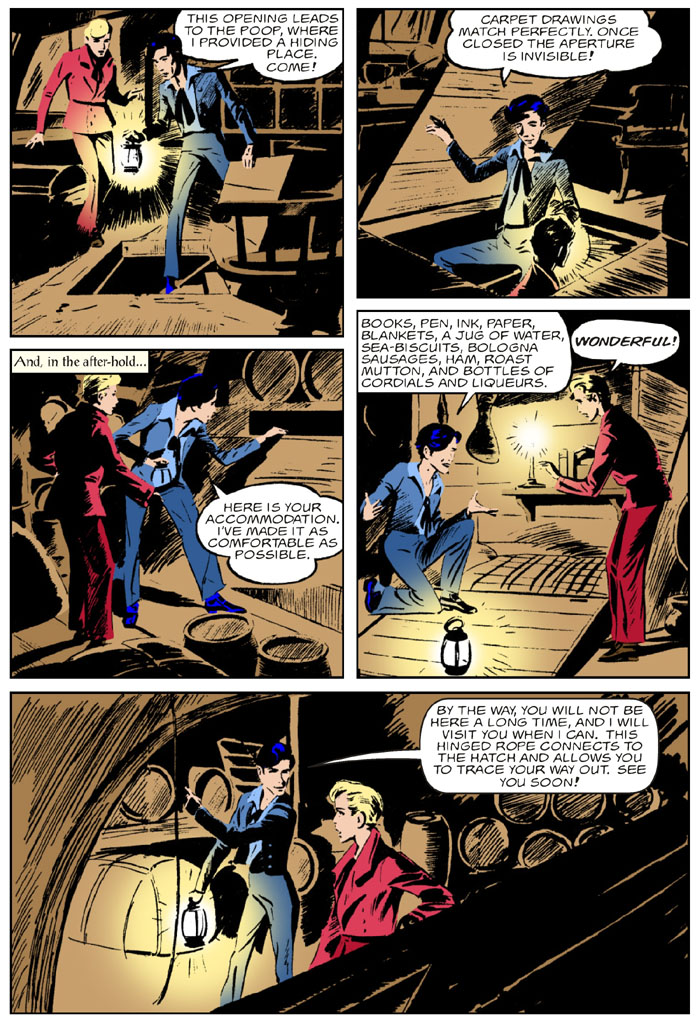 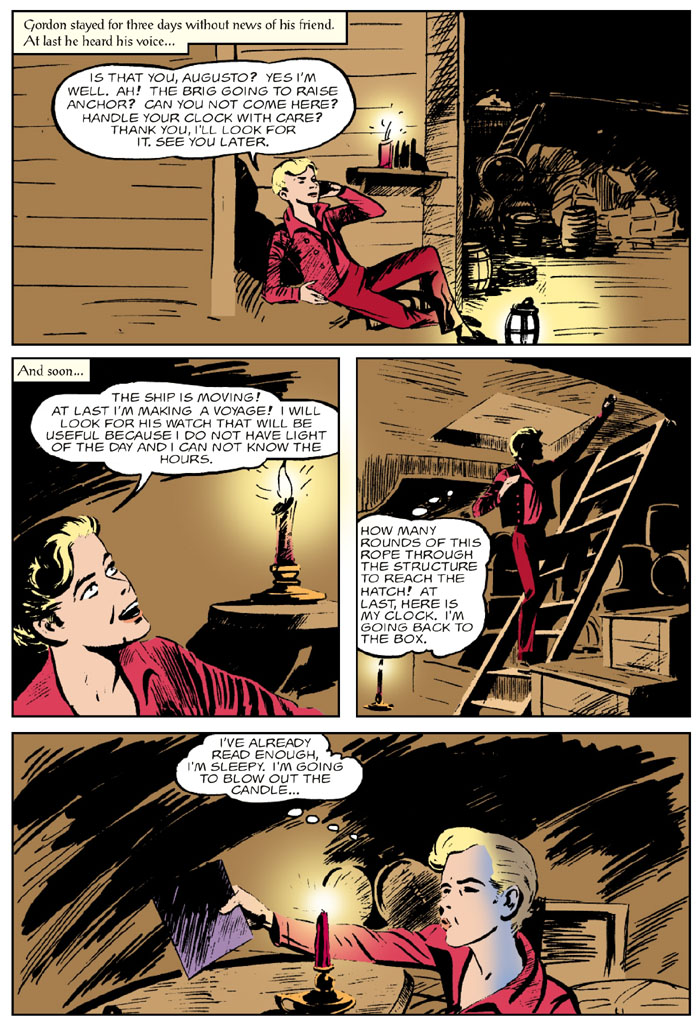 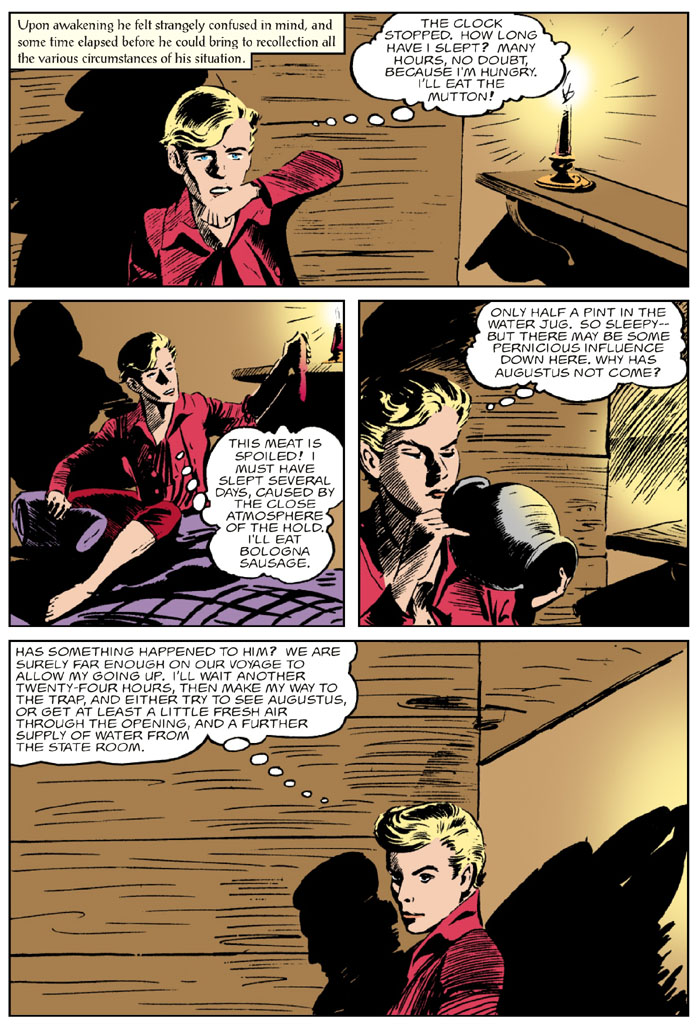 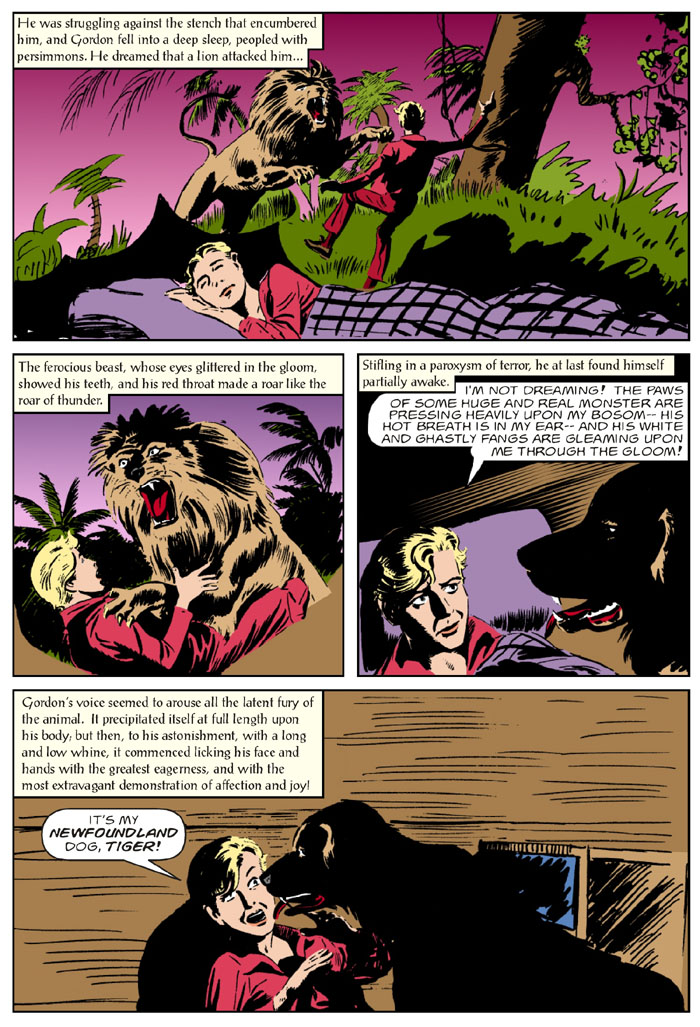 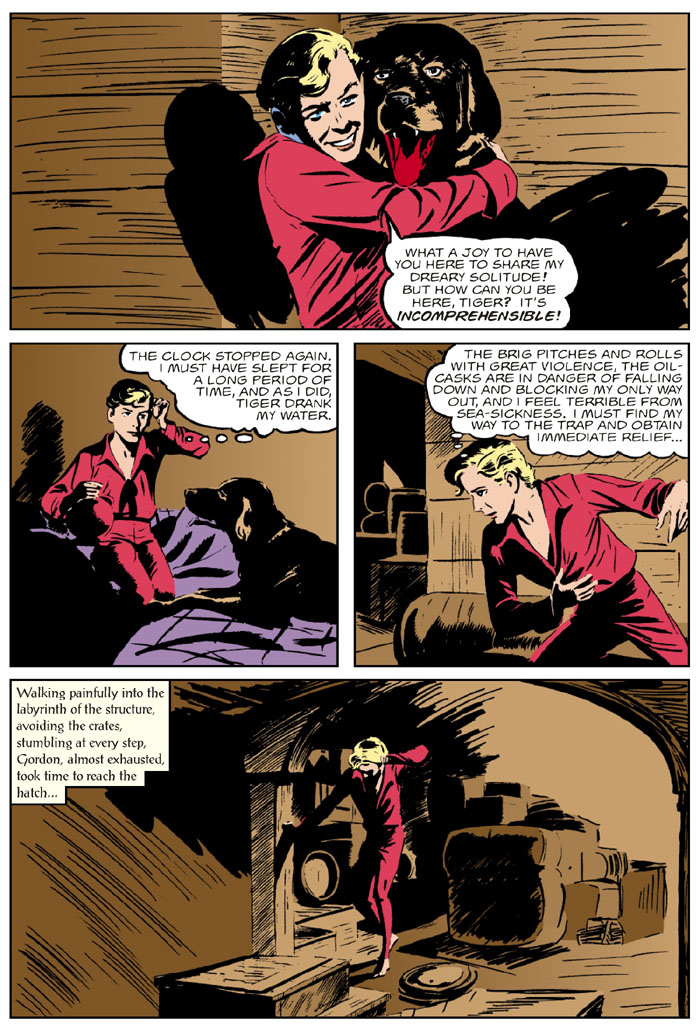 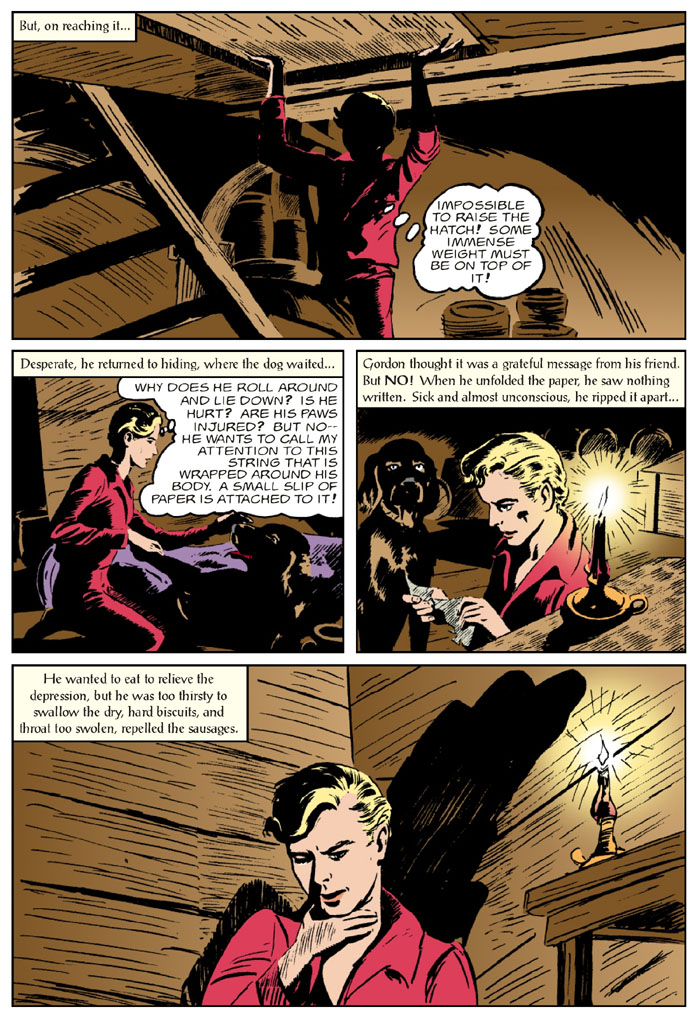 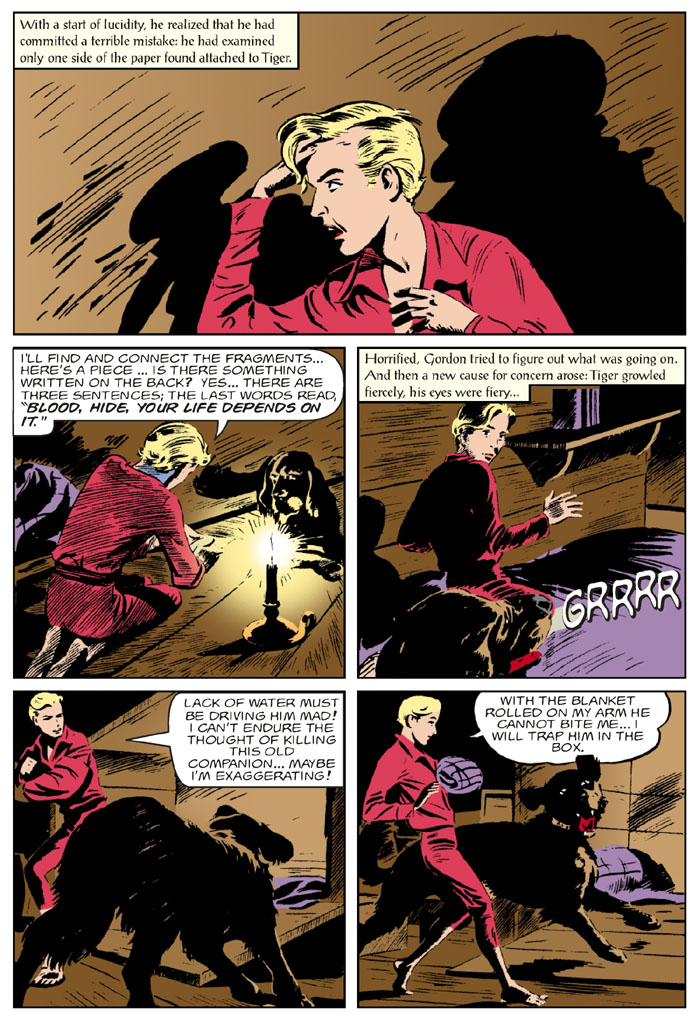 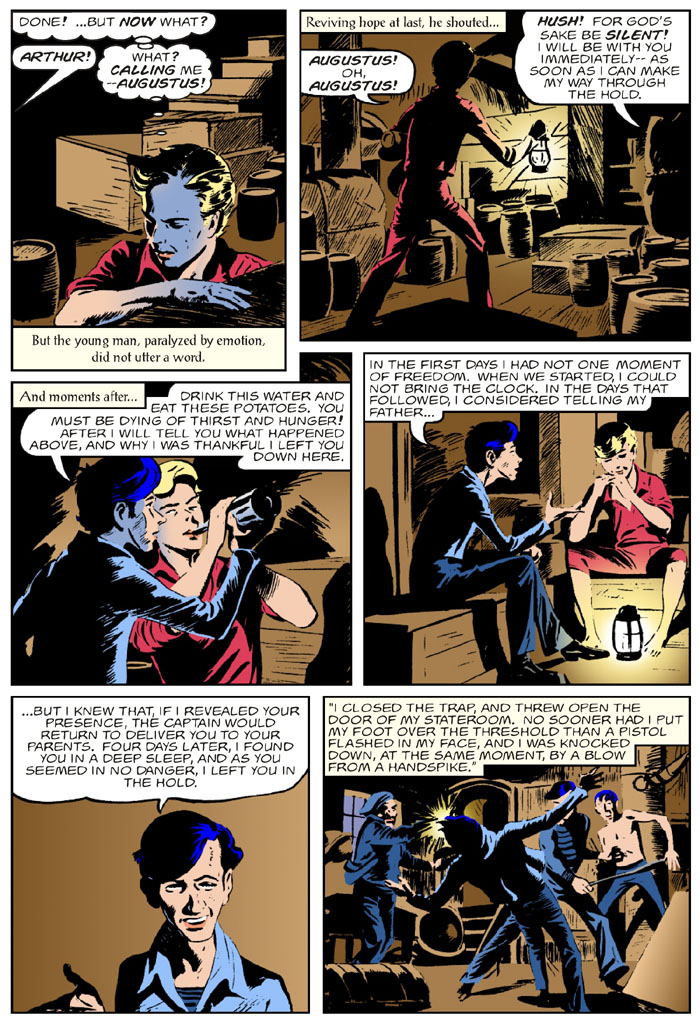 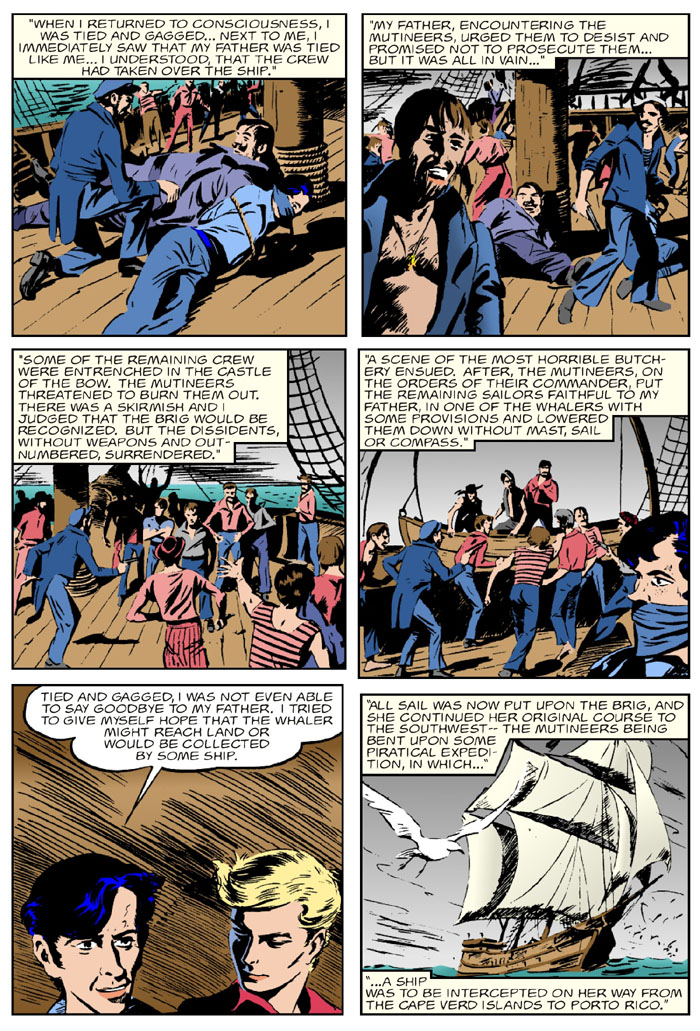 This is nuts.  Page 15 required more work than any of the other pages so far.

First up, the large number of figures took much longer to color.  Especially difficult as, due to the small size of the files, I had to keep zooming OUT to see what I was looking at.

But I didn't expect what was next.

I've been reading the novel along as I did the translation.  This section was compressed FAR more than usual, and skipped over huge passages.  Plus, almost nothing of the original text was usable in the space available.  I've had to go back and retype the Portuguese text into the translator AGAIN, each word on a separate line, and then in more and more cases, type certain words into Google Search by themselves, just to try and figure out what the hell do these words mean?

The 5th panel made less sense than usual.  I jumped ahead to panel 6.  I discovered that by expanding the 2 narration boxes a bit, I was able to use a passage of Poe's original text VERBATIM.  This isn't happening much on this one.

So then I went back to panel 5.  I finally got it figured out.  And then... I realized... part of the STORY did not make sense.  Because, somehow, the events had been jumbled around.

It would have been far too difficult to do this in the PSD file, with ALL the multiple layers involved.  I took the large saved image, before text was added, and in Photoshop, COPIED and PASTED panels 3, 4 & 5-- so they became 5, 3 & 4 !!!!  Yes, I actually moved 3 WHOLE panels.

There was only one thing left to do.  I ADDED exactly ONE line of original Poe text to the whole thing.  A line that was NOT in the comic at all.  But without that line, the thing still made no sense.

"A scene of the most horrible butchery ensued."  After this, I added one more word... "After,"

Yes.  They MURDERED most of the crew, and threw them overboard, BEFORE putting the captain and his closest aides into the "whaler" (lifeboat used for whaling purposes).

Only NOW, after I did this MAJOR "fix", do I realize, that in the comic, most of the crew stayed below decks, while the captain was put OFF the ship, then they surrendered... and presumably, then took part in the piratical scheme.

But by RE-arranging those 3 panels, and adding the one line (and one word) as I did, MOST of the crew is killed BEFORE the captain is put in the longboat.

WHICH IS HOW POE wrote it!! 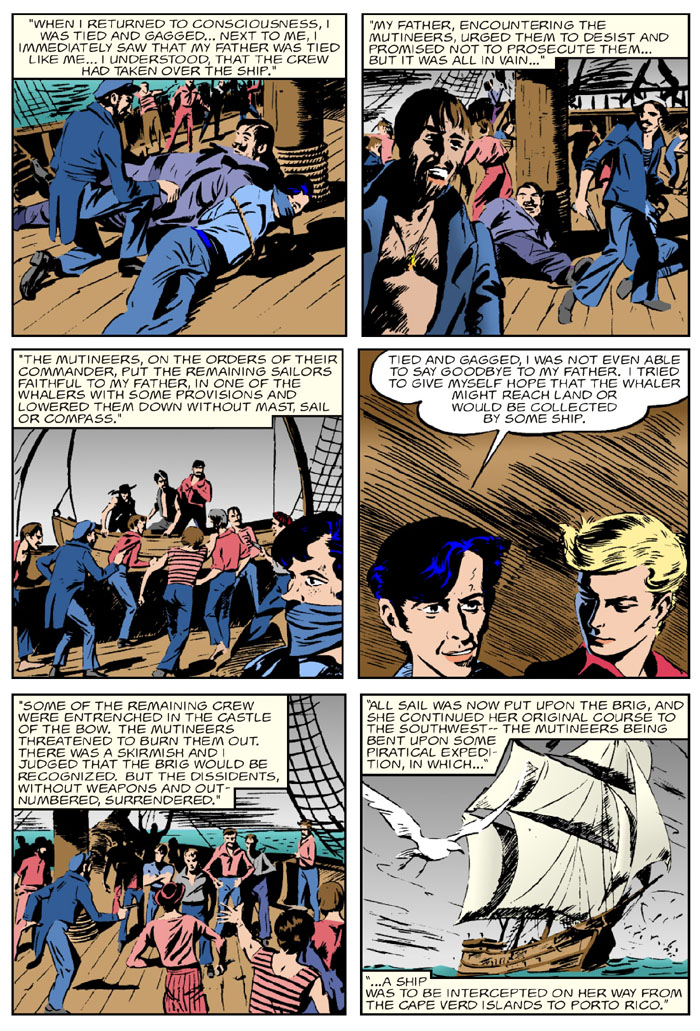 Scan of MONDIAL AVENTURES #29 from the Ebay site.
Scans of ALBUM GIGANTE #39 by "Netto" from the www.GuiaEBAL.com site
supplied by Don Bearden with special thanks!
Thanks to Toni Rodrigues for identifying the cover artist
of ALBUM GIGANTE #30!

Read about The Société Parisienne d'Édition at Wikipedia.
See the complete list of Mondial Aventures at the Bedes d'Antan site!

As an extra bonus, here's the Brazillian splash page
side-by-side with my translated & colored version! 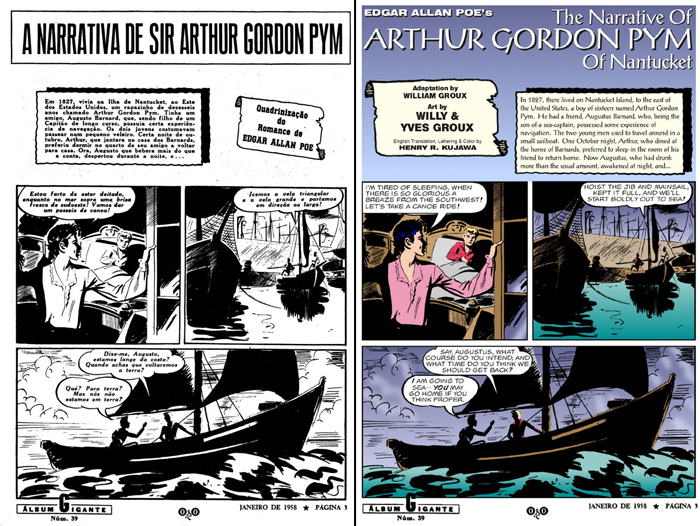