I have discovered, between my own researches and the IMMENSE help of artist and fellow fan Toni Rodrigues, that Continental / Outubro / Taika during their run produced at least 25 POE adaptations-- more than Skywald or Warren !!  It's my intention to compile, clean up, TRANSLATE and COLOR every one of these for my POE blog project!!

"MANUSCRIPT FOUND IN A BOTTLE"

One of Poe's numerous "disaster at sea" stories, this was only the 2nd comics version of this, following Youthful's CHILLING TALES #17 (Oct'53), which was at least 14 years earlier.  There would be several more to come.

This is his 1st of 5 POE adaptations.

I originally set this up in July 2015, but so many stories and so much information has turned up since, I've moved this page to help make the blog more organized.  In December 2015, I found a MUCH sharper image of the 1st page, so when I set this new page up, I also redid Page 1 from scratch, so it looked much better.

As of June 2016, I discovered that ALBUM CLASSICS DE TERROR #3 had
3 POE stories--  "HOP FROG", "THE MASQUE OF THE RED DEATH", "MANUSCRIPT FOUND IN A BOTTLE", plus a text story, "SILENCE -- A FABLE".  So far, every issue of ALBUM CLASSICOS DE TERROR I've run across has had at least 1 POE story in it-- and only 1 has not yet turned up in any form.

On 12-6-2018, I managed to get ahold of a copy of the original comic.  I hate doing any job twice, but being able to do my own HIGH-RES scans straight off the original comic allowed the improvement in line quality to be so drastic, it was worth it.  I also redid much of the translation, using as much of Poe's original narration as possible.  This "REMASTERED" version was finished on 8-3-2019. 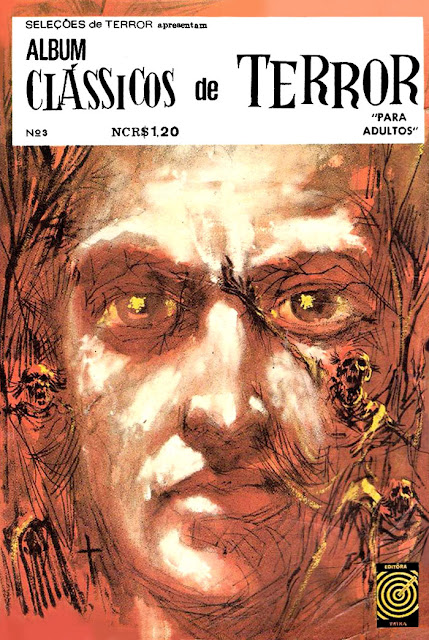 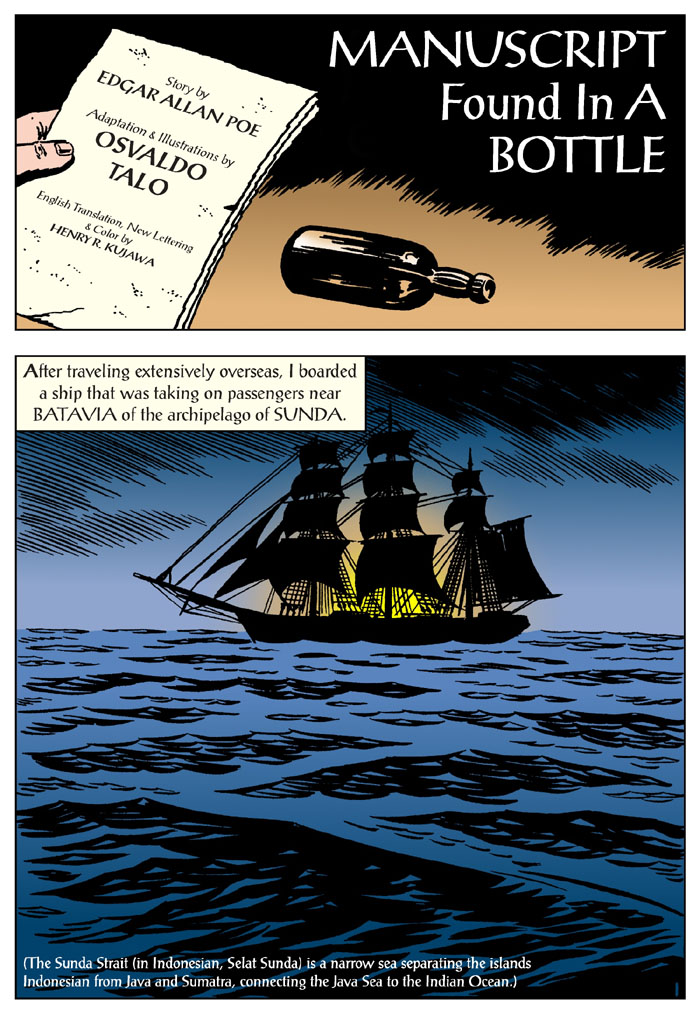 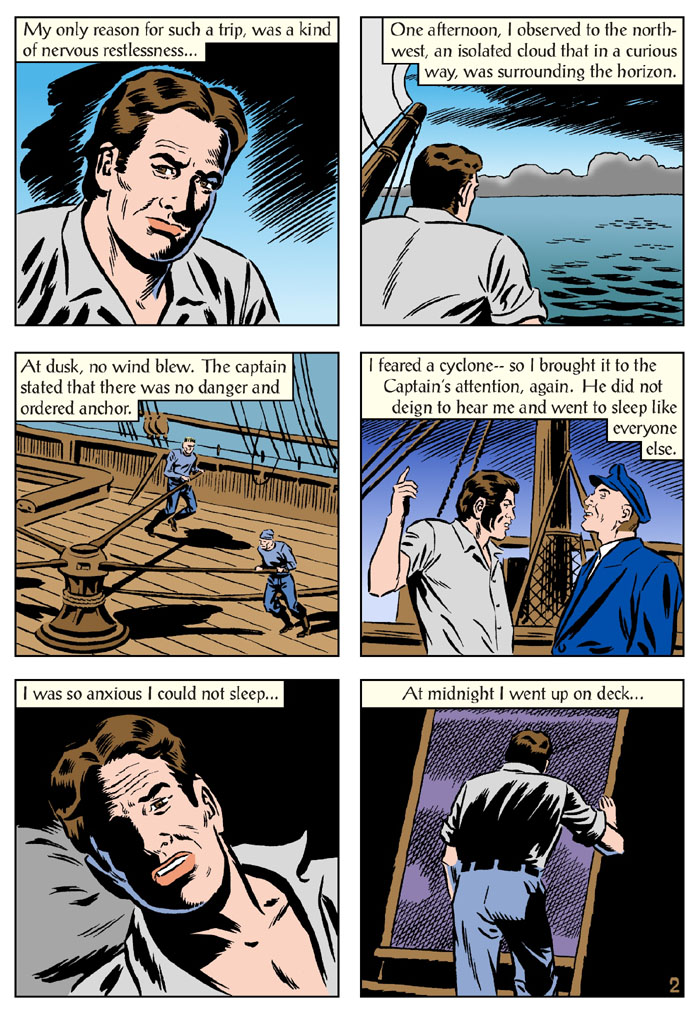 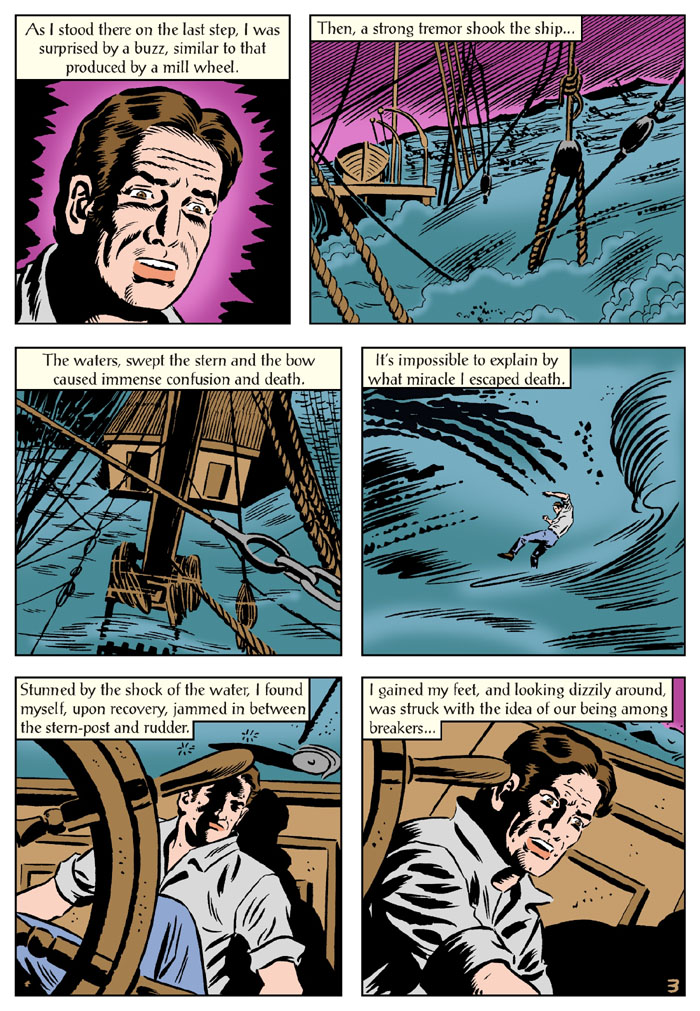 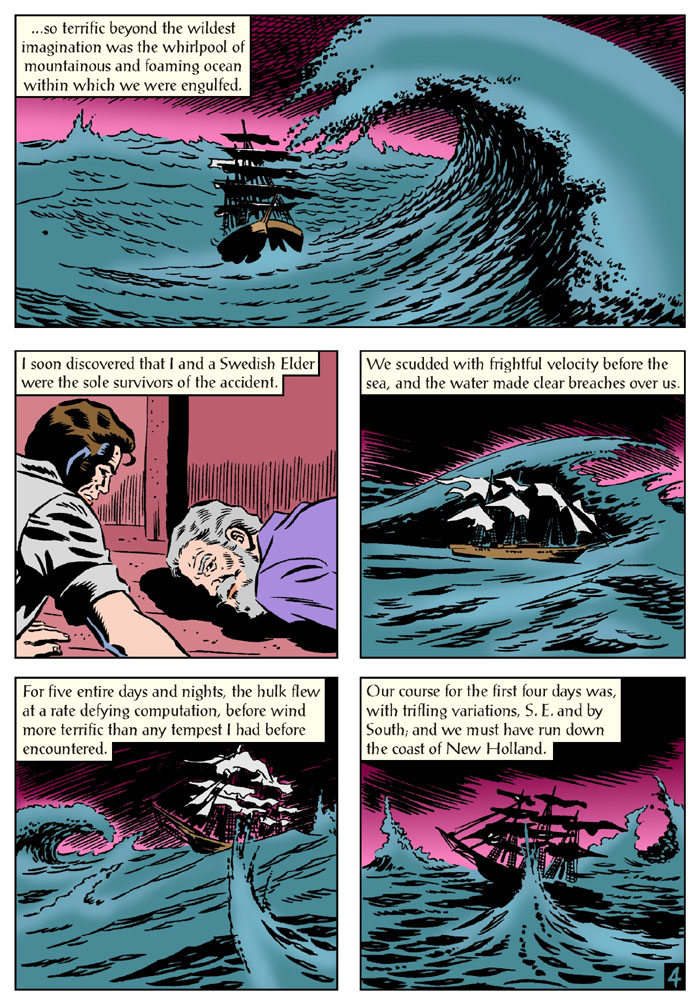 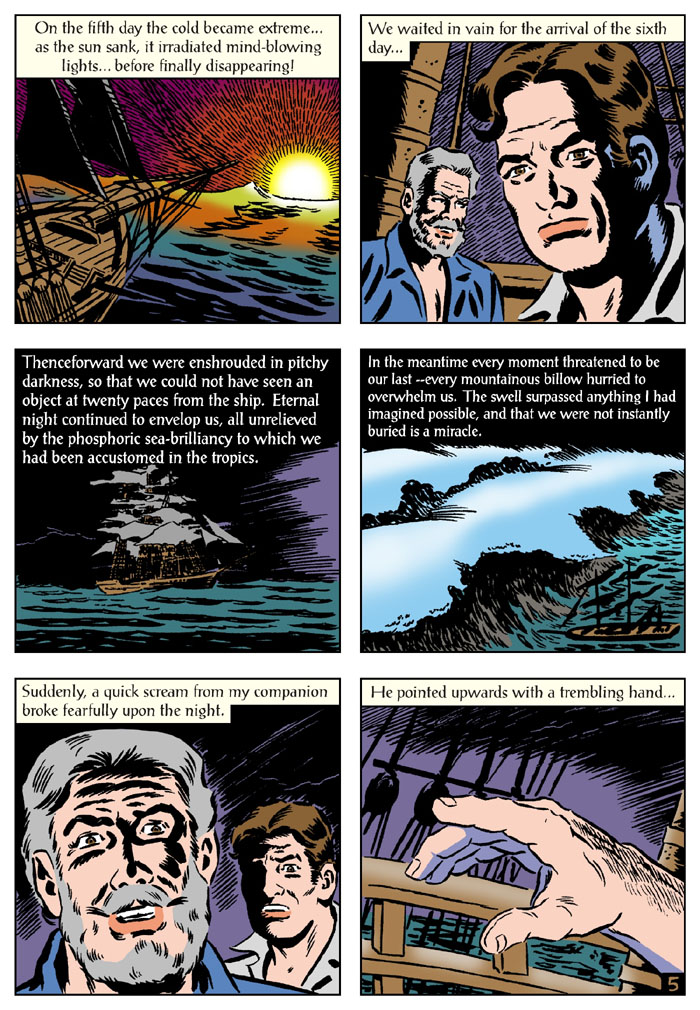 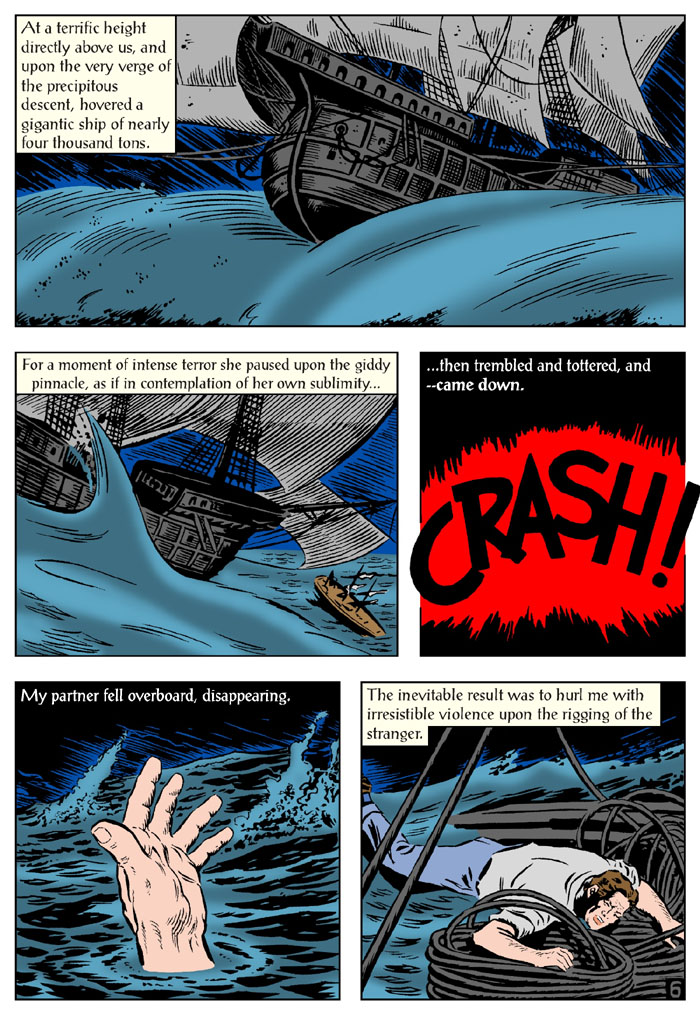 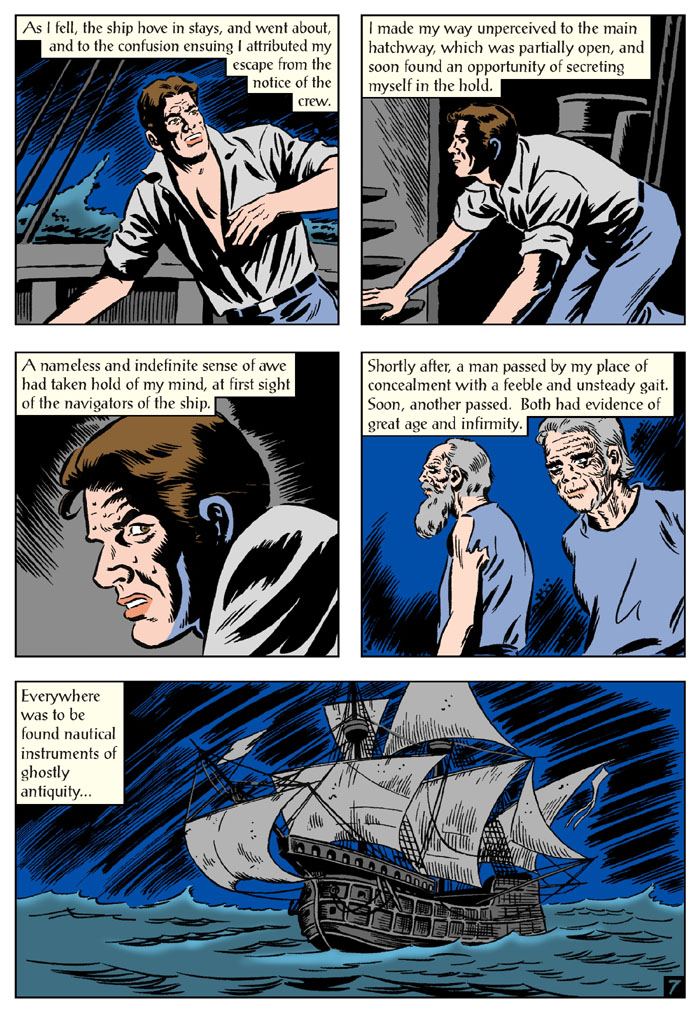 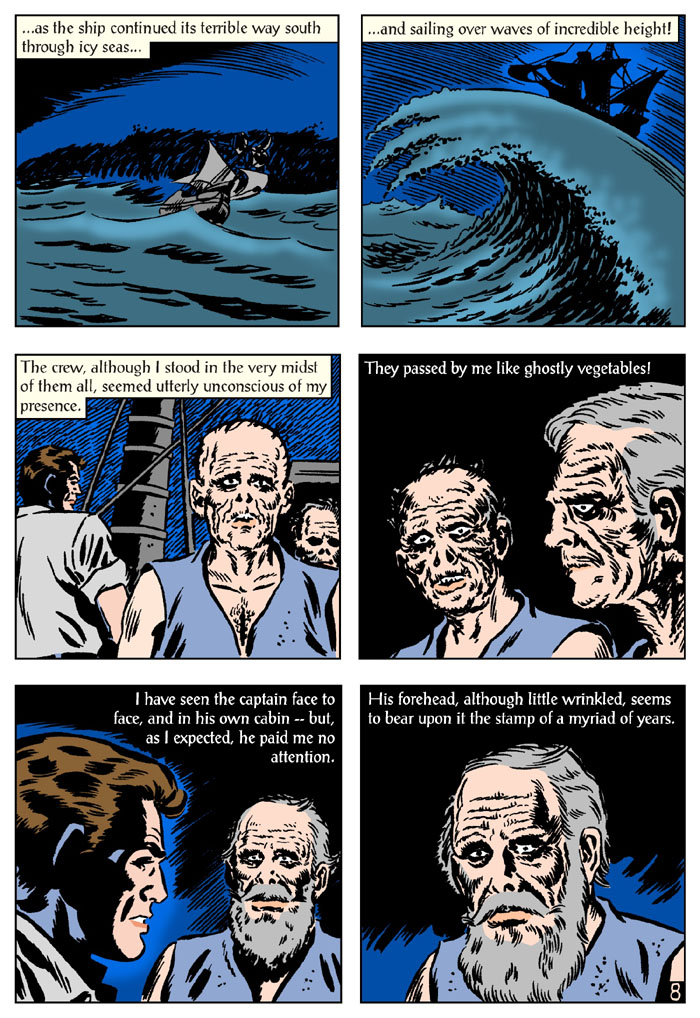 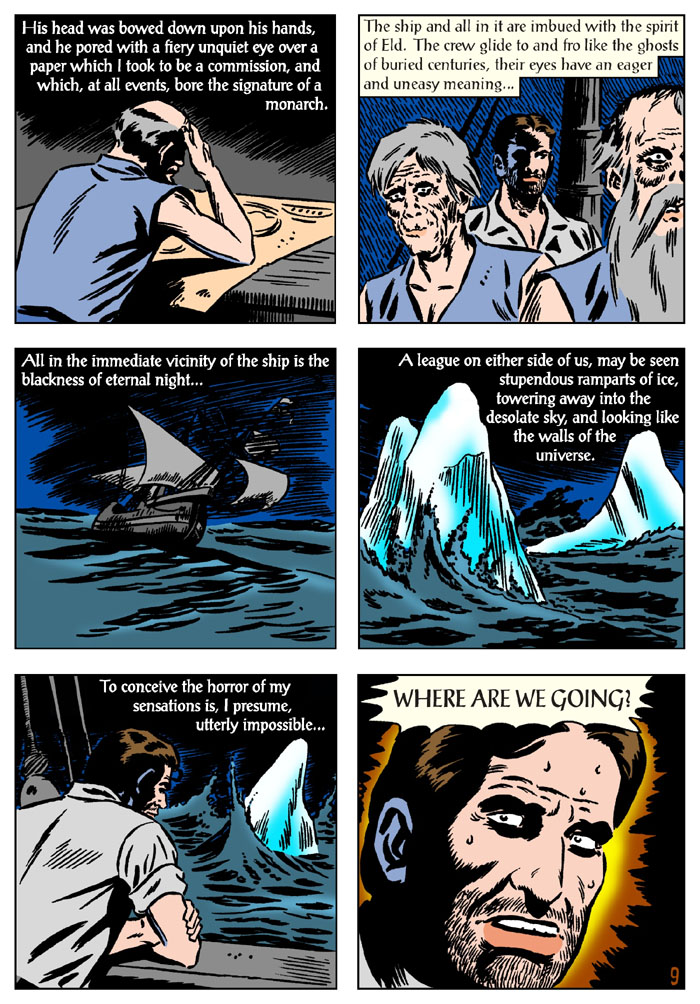 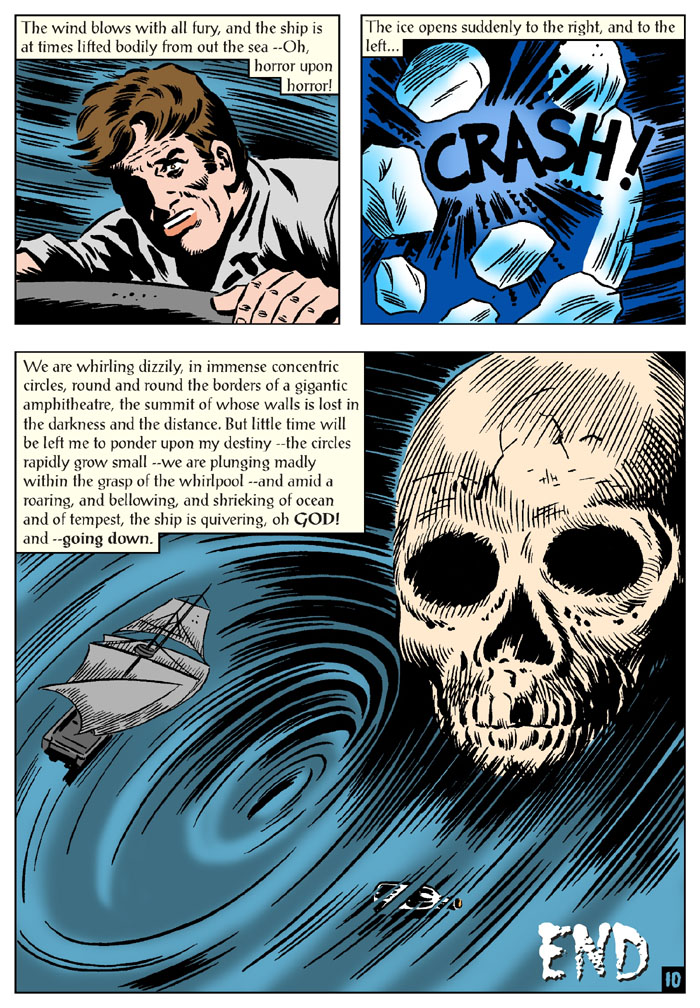 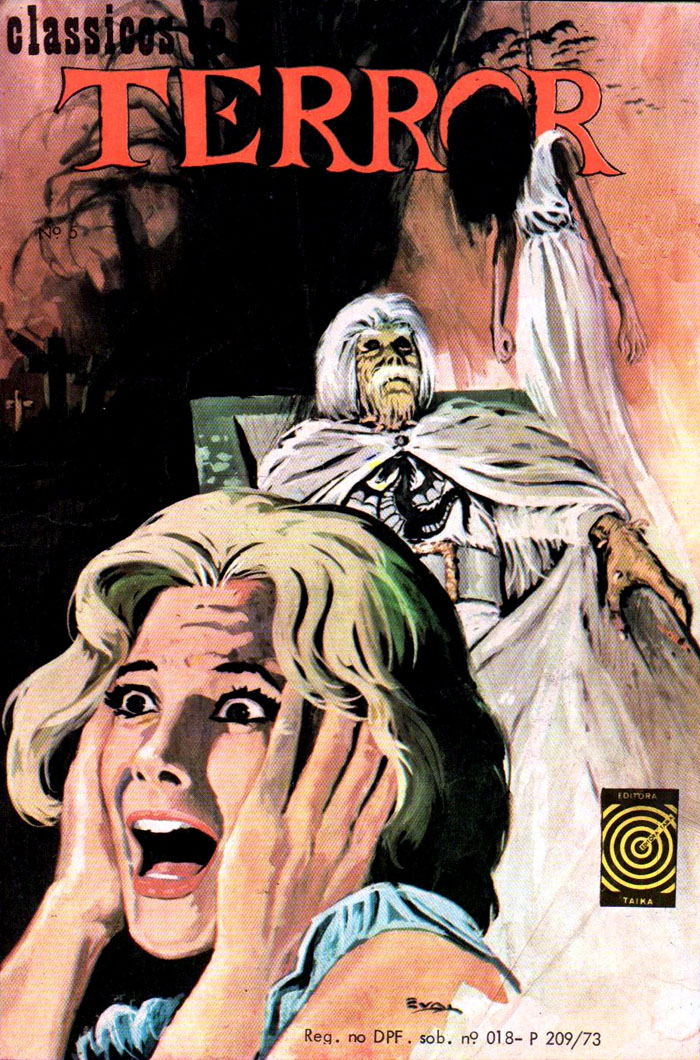 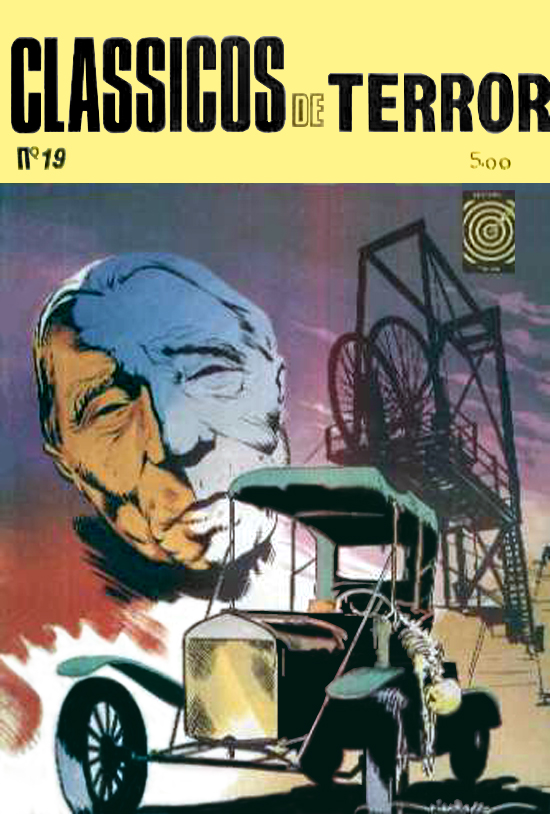 Sometimes doing an English translation is simple.  Other times, what kicks out of the translator seems to make no sense, or may even be completely at odds with what's actually going on in the panels.  Many times, it seems so "wrong", I wind up quoting Poe's original text verbatim.  When I redid the scans (4 years after initally processing this story), I wound up replacing MUCH of the narration.  I'm reminded that Jeremy Brett often found himself doing this while filming his SHERLOCK HOLMES episodes, in an attempt to bring things back to Arthur Conan Doyle.

Sometimes Poe's text can seem strange, archaic and even inexplicable to modern minds... but I see it as a piece of history.  The closer the text is to what Poe wrote, both the choice of words and the phrasing of sentences, the more "authentic" it is.

Although this story was never (to my knowledge) adapted to film, it strikes me that Osvaldo Talo's depiction of the main character (and narrator) resembles actor Frank Maxwell, who played "Dr. Willett" in Roger Corman's "THE HAUNTED PALACE" (itself adapted-- rather loosely-- from H.P. Lovecraft's "The Strange Case Of Charles Dexter Ward").  As I worked on cleaning up and translating this comics version, it seemed to me Maxwell would have have been a perfect fit for this story.  I could easily hear HIS voice in my head as I read the text of this bizarre, nightmarish story. 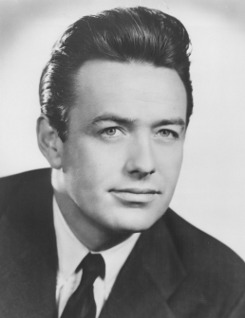 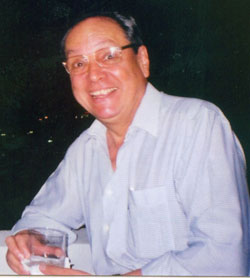 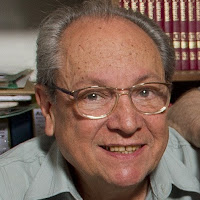 NEW Scans of ALBUM CLASSICOS DE TERROR #3
from MY collection!
Special thanks to Vagner Ferreira Silva.

Read about MS Found In A Bottle at Wikipedia.
Read the complete story at the Poe Stories site.