Now we come to an odd one.  I ran across this story in a Brazillian comic from 1981-- but, apparently, it had actually been created in 1967, for a publisher that went bankrupt just before it was published!  But, for "historical" purposes, I'm "filing" it under 1967!!

"MORELLA" is not one of the better-known POE stories, despite it having been adapted by Roger Corman & Richard Matheson as the 1st story in their anthology film, "TALES OF TERROR".

I've read the story, and it becomes clear that certain elements of it made their way into the climax of the later Corman film, "THE TOMB OF LIGEIA".

One look at the comic you're about to read, however, told me this comic was NOT really an adaptation of the POE short story-- but was instead based directly on the version seen in "TALES OF TERROR"!  Given this was done in 1967 rather than 1981, that makes a certain amount of sense.  I thought it was odd that a comic-book should do an unauthorized adaptation of a movie from 21 YEARS earlier! 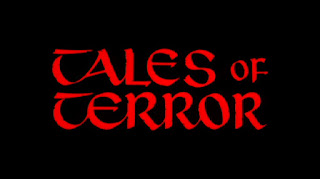 Please note that the house seen on Page 1 is actually based on the one in "The Facts In The Case of M. Valdemar", not the "Morella" section of the movie.

In any case, this is the 2nd comics version of the story, following Dell's Poe's TALES OF TERROR (Feb'63).  2 down, and neither one "authentic" to the original!

The artist in this case is Eugenio Colonnese.  In my search for all things POE (including from Brazil), I've run across a vast amount of his work, and come to like his style very much-- which makes me glad he did at least this ONE POE comic so I could include it in this project. 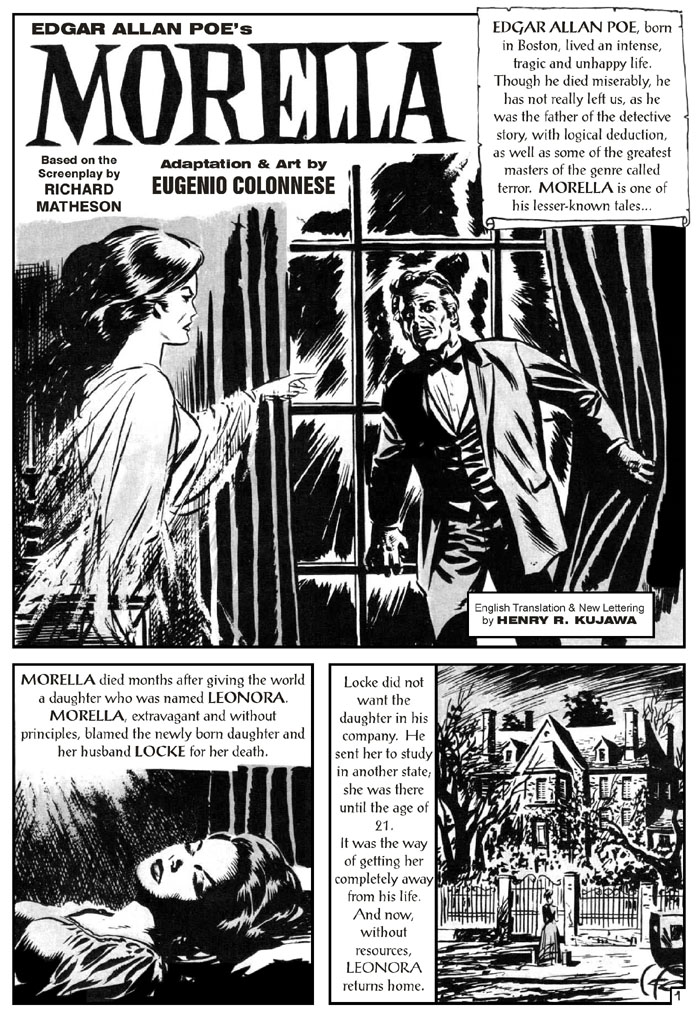 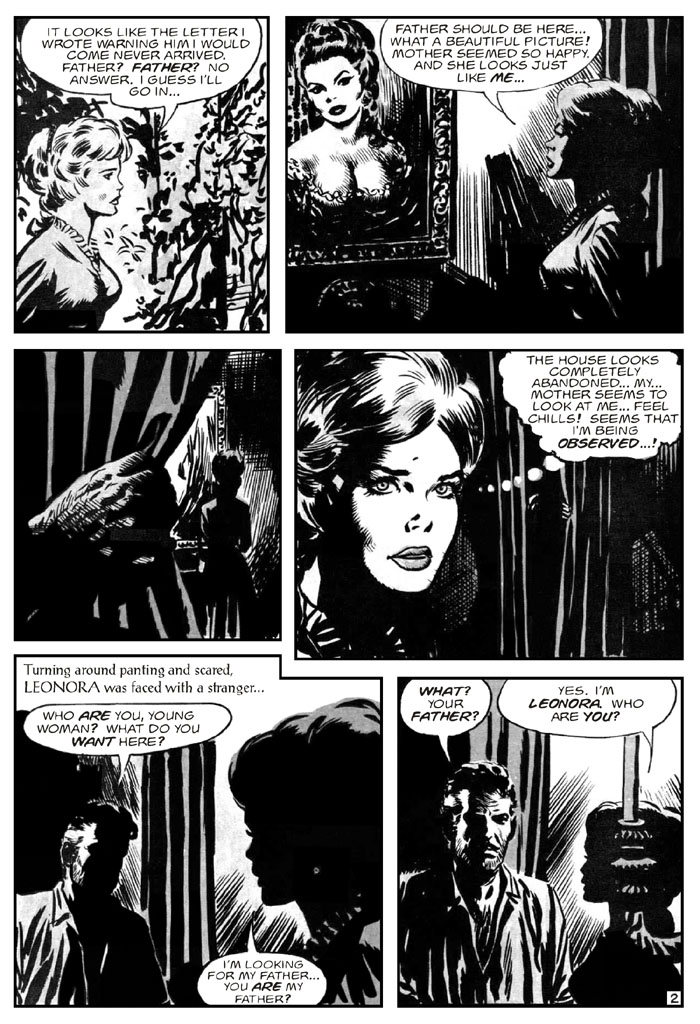 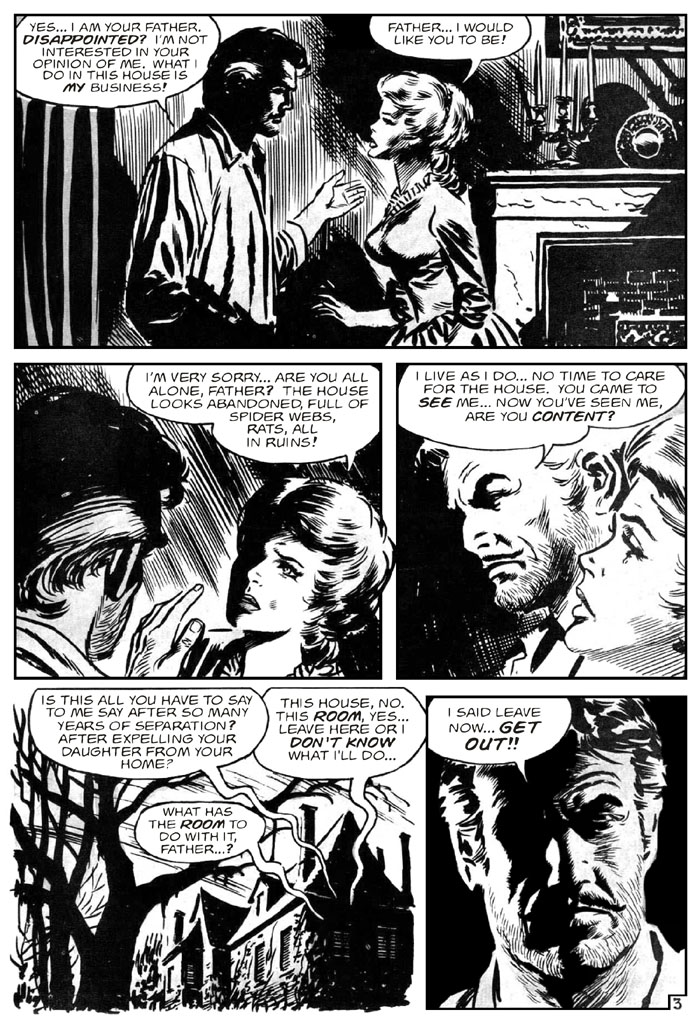 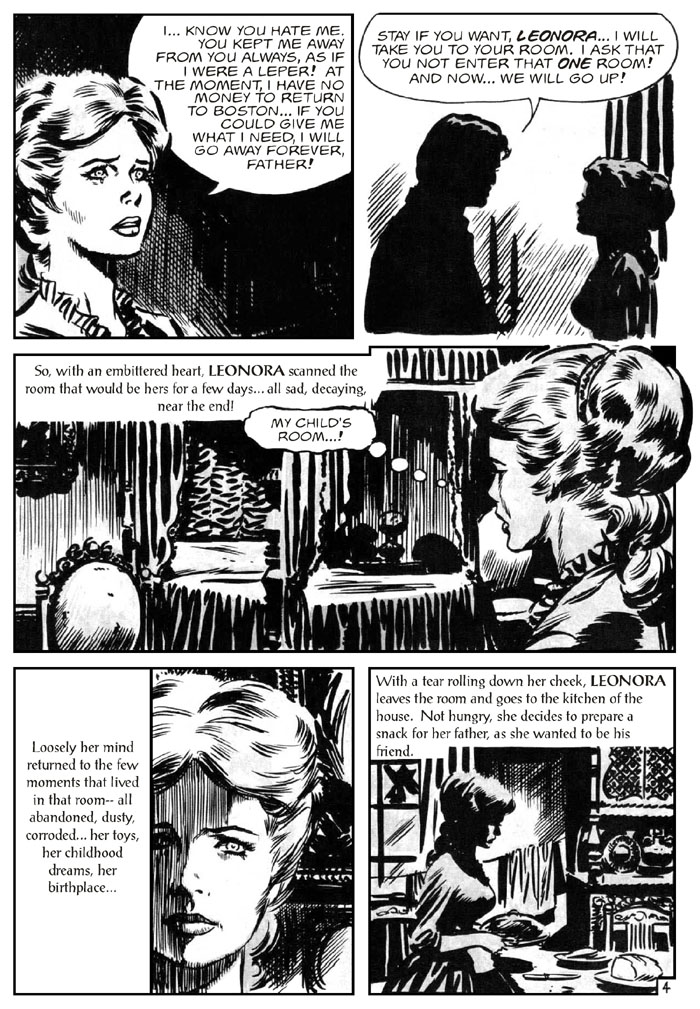 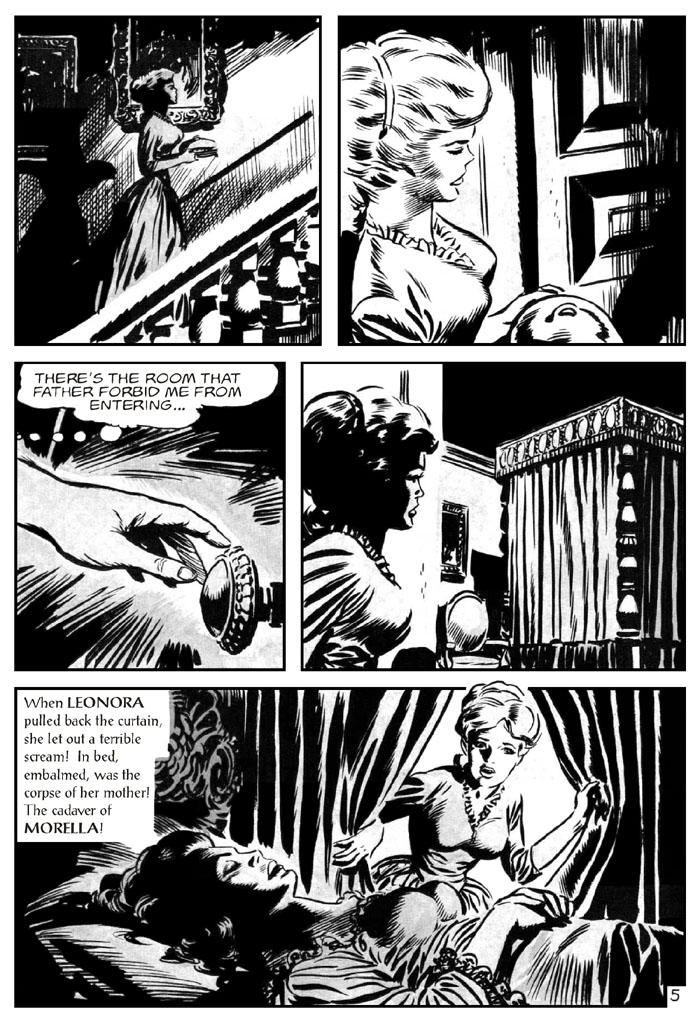 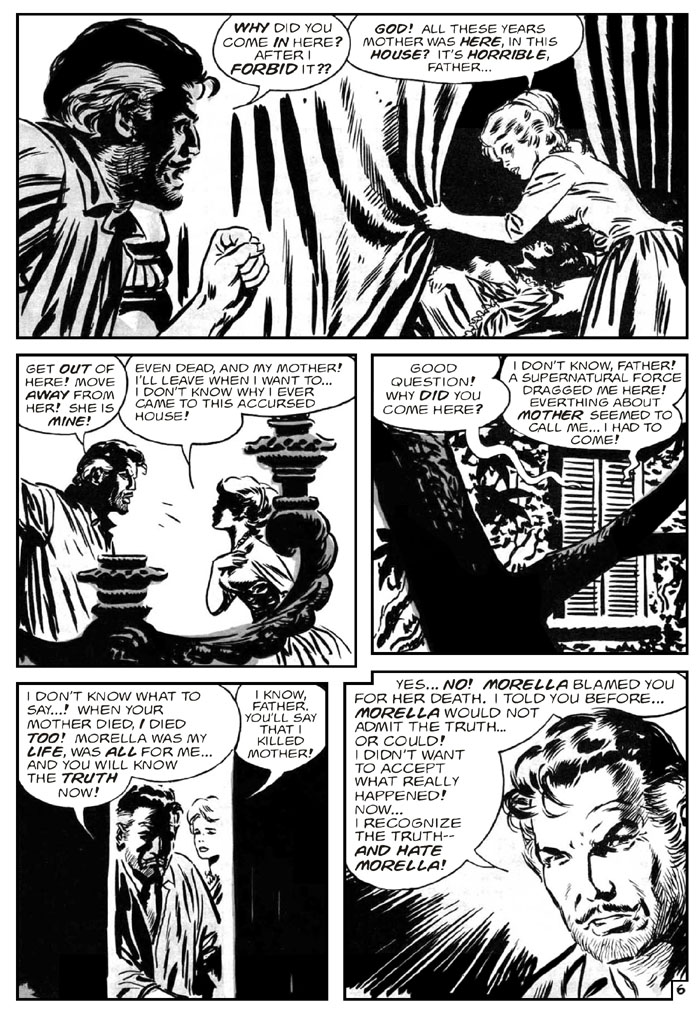 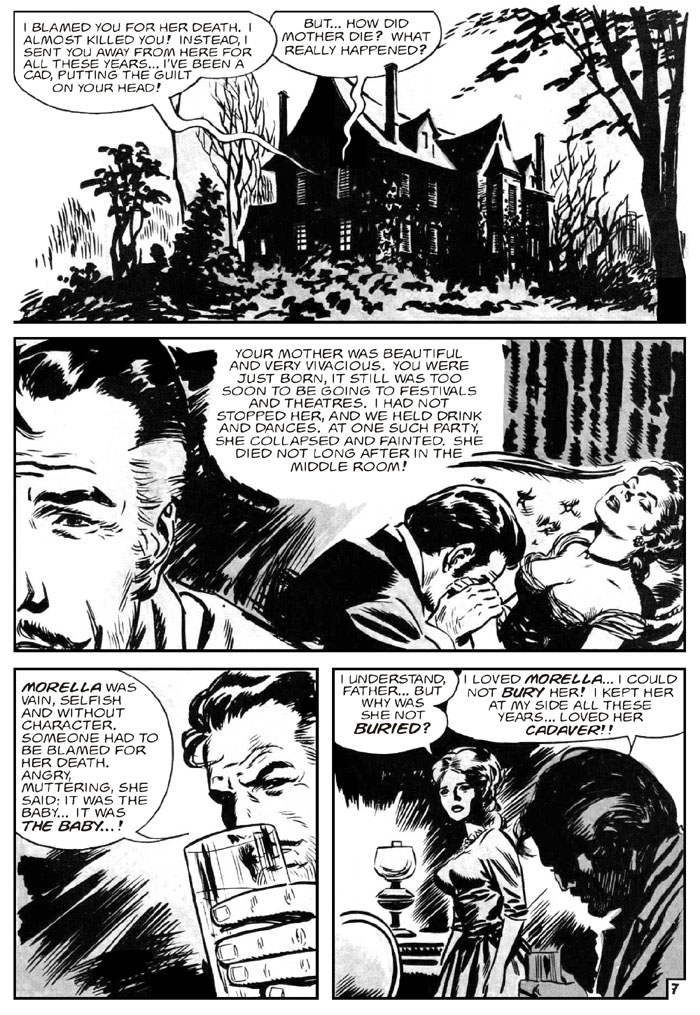 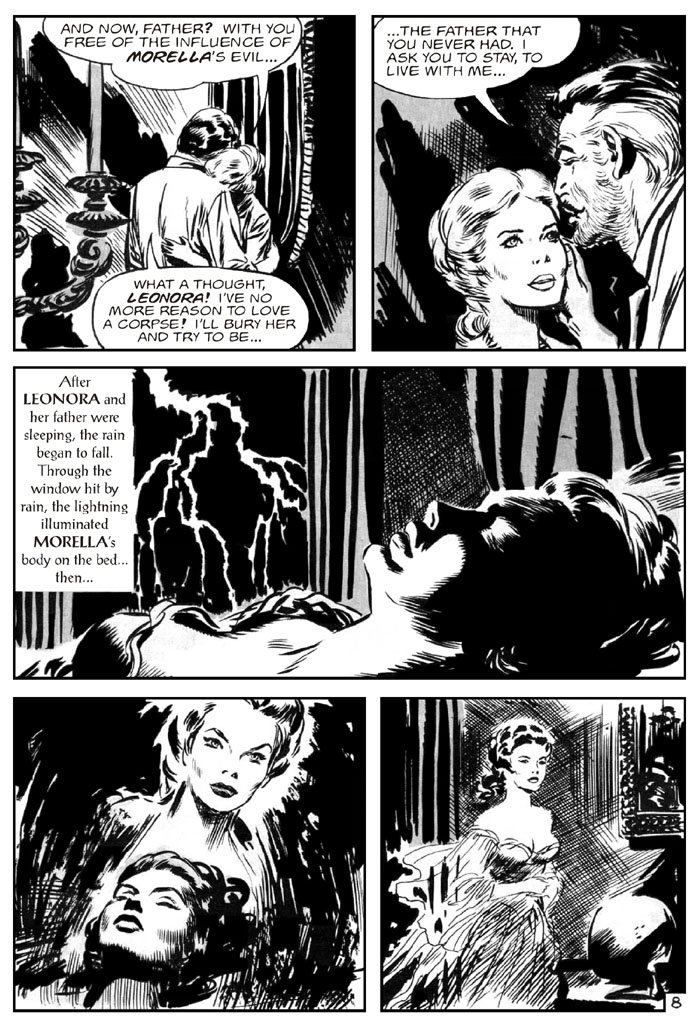 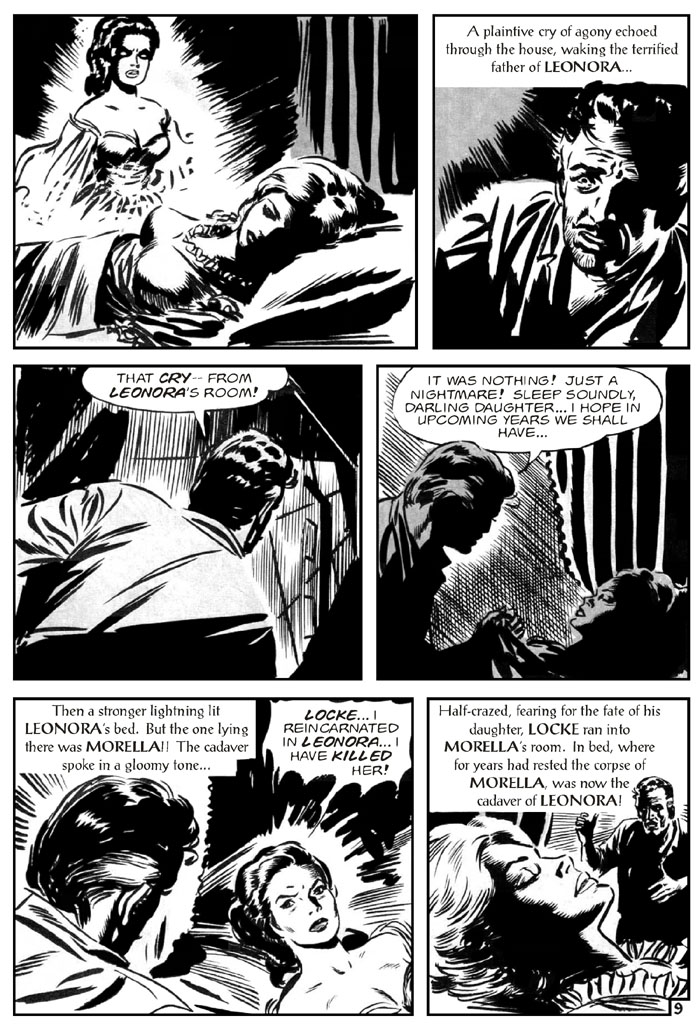 Beautiful art by Colonnese, in some ways better
than what George Evans did 4 years earlier.

Note, the house as seen in the film's version of "Morella"...

Compare this with the house seen in the SAME film's version of "Valdemar"...

...which was clearly the reference used by Colonnese... 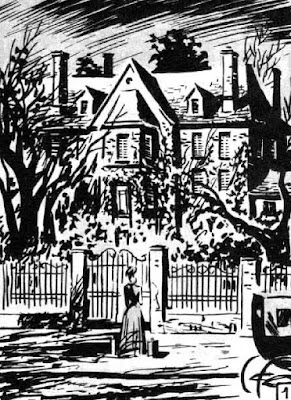 I had more difficulty than usual doing the English translation for this.  At one point, I considered looking at the film and taking dialogue from that verbatim, but I think things worked out.  (The only words I specifically took from the film were "Father" and "Mother", as opposed to "Daddy" and "Mom", which is what the translator kicked out!)

One thing that became clear was, whoever wrote this version eliminated the sub-plot about Leonora having only a few months left to live, and replaced that for a reason behind her visit with her being somehow drawn to the house by the force of her not-completely-dead mother instead.

The movie version also ended showing Morella back in her original place, with the now-dead Locke on the floor with his daughter, Leonora... suggesting that the climax of the story MAY have all been in his mind, rather than a result of the supernatural, as clearly done in the Brazillian version of the comic.  This deliberate vagueness was later reused in the film "THE TOMB OF LIGEIA", which tried to leave it up the audience to detemine whether what they saw was really the supernatural, or entirely in the main character's mind.

It's also notable that lightning destroyed the house in this version, rather than a knocked-over candle as in the movie.  The old, decaying house destroyed by flames was featured in Corman's HOUSE OF USHER, TALES OF TERROR, THE RAVEN, THE HAUNTED PALACE and THE TOMB OF LIGEIA, though lightning (or perhaps, a fireball from space) was the cause in the original Poe story "USHER".  Oddly enough, I just noticed the Dell version of THE TOMB OF LIGEIA also substitutes lightning for overturned candles!

This comics story finally turned up in the 1st issue of CALAFIO ("Chill") in 1981, which had both Rodolfo Zalla & Eugenio Colonnese as its editors!  The magazine, which has had at least 57 issues over the years (plus 5 specials), would feature at least 4 POE adaptations, 2 of the others with art by Rudolfo Zalla.  (I'll get to them eventually.) 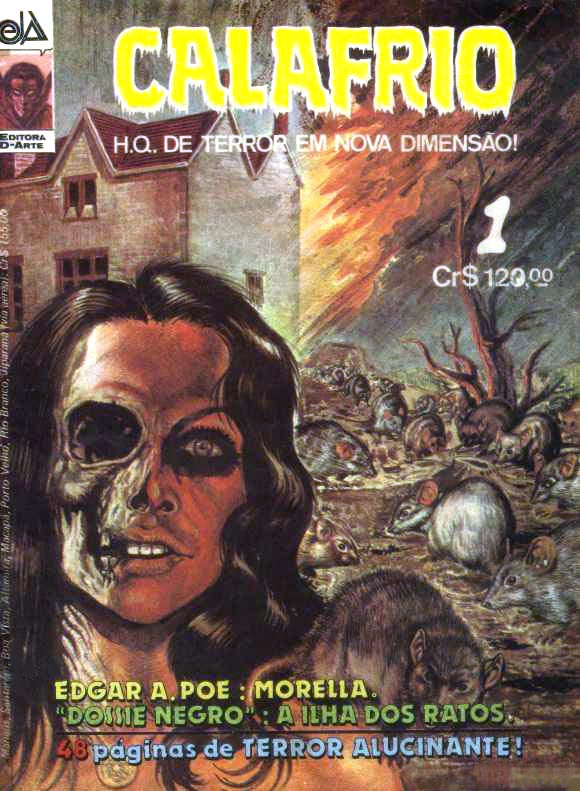 6 years later, the story was reprinted in the 1st CALAFRIO ESPECIAL.  The line reproduction is terrible, by comparison.  (All the graytones got blanked out.)  What IS it about so many reprints? 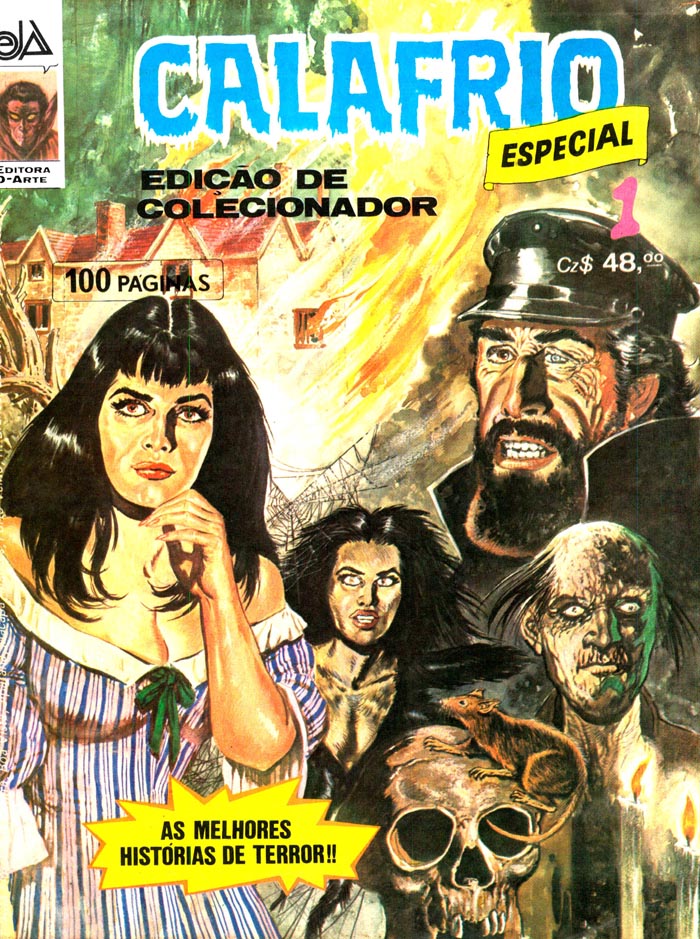 "Morella was created for a magazine that was not published.  In 1967 Paulo Marti, who owned a big printing service got interested in publishing comics.  He contacted Reynaldo de Oliveira who worked at Jornal da Tarde newspaper as "Secretário Grafico", somewhat like a production director. He introduced both Colonnese and Zalla to Paulo Marti.  Zalla was leaving his tenure as Art Director for Taika and was aware that horror stories sold very well.  He and Colonnese also worked for Miguel Penteado at GEP doing horror, war and westerns and even some super-hero stuff.

Zalla was quite impressed with Warren's BLAZING COMBAT, CREEPY and EEEIE and he convinced Marti to do a war and a horror magazine using halftone instead of just line like both Penteado and Taika used to do.  Marti gave them the go ahead and both Colonnese and Zalla produced war and horror material enough for 5 issues of each magazine, one was to be named "CALAFRIO" exactly like the one Zalla later edited.  The other one was to be named "GUERRA TOTAL", a title later used by Editora O Cruzeiro when they edited here Gold Key's TOTAL WAR.

At the same time Reynaldo de Oliveira and Alvaro de Moya were producing the VERY ambitious SUPLEMENTO em QUADRINHOS for Marti.  Its was on a giant format, all in color with a high quality paper stock and published on a weekly basis.  And it was a very big flop.  Marti lost so much money with it that he became afraid to publish Colonnese and Zalla's horror and war magazines.  He paid both of them, but aborted the project.  Both artists kept the originals and even some film of the stories that were already produced, including "MORELLA".

Part of what both produced was later published in CALAFRIO and MESTRES DO TERROR.  Some of the war stories were also published on special volumes by during the 1990's for Editora Opera Graphica.  Paulo Marti and Rodolfo Zalla became very good friends.  Paulo Marti started to make a LOT OF MONEY editing schoolbooks, his publishing house was famous for those, Brazilians will remember it was IBEP and had lots of high selling books on History, Geography and Portuguese, many of them illustrated by Zalla, who kept working for the family and receiving a salary even after Paulo Marti's passing.  They sold IBEP, but opened another publishing house named Editora Sarandi and Zalla was on the payroll untill his passing."

WOW!  As usual, Toni's a wonderful font on information.  So, it turns out the magazine would have been "CALAFRIO"... just like it later was.  It just got delayed for about 14 years.

Read the complete story at the EBooks Adelaide site
See the MORELLA Gallery of Illustrations.