As of June 2016, I discovered that ALBUM CLASSICS DE TERROR #3 had
3 POE stories--  "HOP FROG", "THE MASQUE OF THE RED DEATH", and "MANUSCRIPT FOUND IN A BOTTLE"; plus, a text story, "SILENCE -- A FABLE".  So far, every issue of ALBUM CLASSICOS DE TERROR I've run across has had at least 1 POE story in it-- and only 1 more has not yet turned up in any form.

The art this time is by Ignacio Justo, who seems to be mostly known for war comics.  The inks are by an assistant of his, known only as "Edegar".  Apparently he only worked in comics a short time, which may be just as well, as I consider him one of the sloppiest artists I've ever seen.  He's the one who first inspired me to begin replacing badly-drawn panel frames with nice, sharp, straight ones in Photoshop, something I've since done with many other artists' work.

This was their 1st of 6 POE stories.

On 12-23-2018 I managed to get my hands on a copy of this comic-- one of the very FEW I've managed to do so with, from Brazil.  When I did, I was shocked to find a sheet was missing, which should have contained the first 2 pages of this story.  I'm guessing that those 2 pages were missing from EVERY copy of this book-- and that would explain why this story has NEVER turned up as a reprint, or been posted online at blogs.

I decided I WASN'T going to let that stop me from posting it here.  I determined to create NEW artwork to replace the missing pages-- MYSELF!

The castle on the first page was actually a spot illustration for an entirely unrelated text story near the back of the comic. It was too perfect not to re-purpose!  Even my friend down there, Toni Rodriguez, is not sure who drew the castle, though he suspects it might be Osvaldo Talo, one of the few comics artists of Brazil from that period who is STILL around!


I had to study Poe's original text carefully to decide exactly what to include on page 2.  The reference to the jester's birthday, as far as I know, has never appeared in any other comics adaptation of this story.

The pose in the 1st panel of the 2nd page was a tribute to Reed Crandall's version! 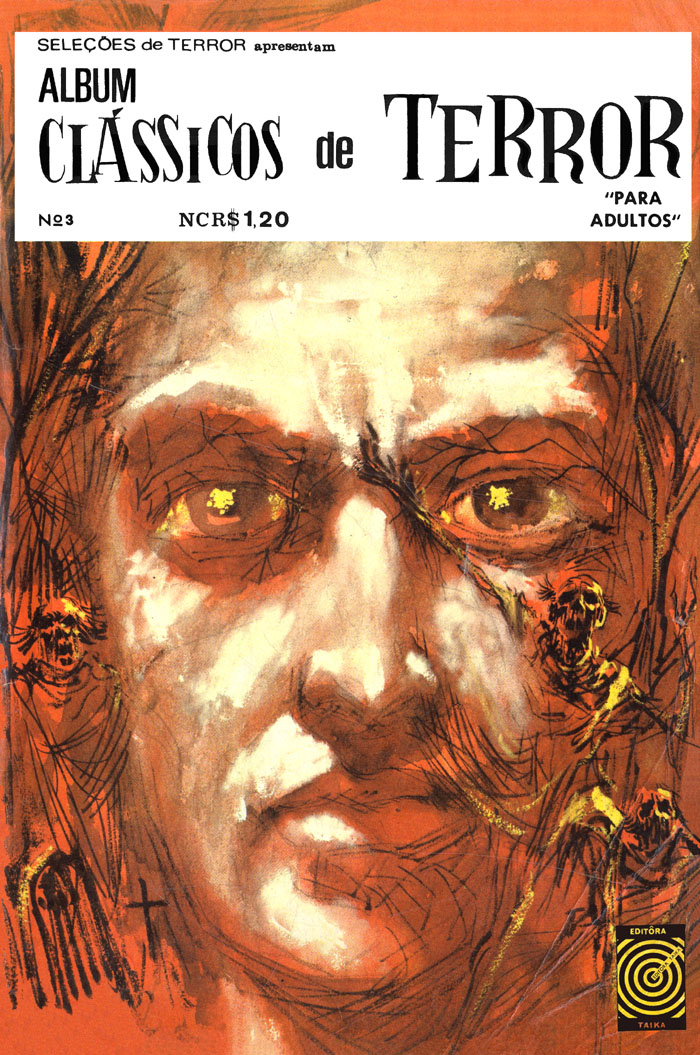 As this is the 1st of several issues with multiple POE stories, I thought I'd include the contents page-- UNprocessed-- so you can see not only what I'm dealing with, but also, just how SLOPPY Taika's production department had become without its 2 artist owners in charge anymore.  The logo seen at the top of this page was used on the covers of rht first 2 issues of this series.  A new, less thrown-together-looking logo replaced it for issues #3 & 4, while a slicker logo debuted on the cover of issue #5.  Note how here, much of the production paste-up work is so bad, the lettering isn't straight or consistent, and you can even see where some paste-up work had been done.

"Oh! tu mortal que me ves repara bem como estou.  Eu ja fui o que tu a e tu seras o que son."
"Oh! your mortal who sees me repairs as I am. I already went or you, you will be what they are." 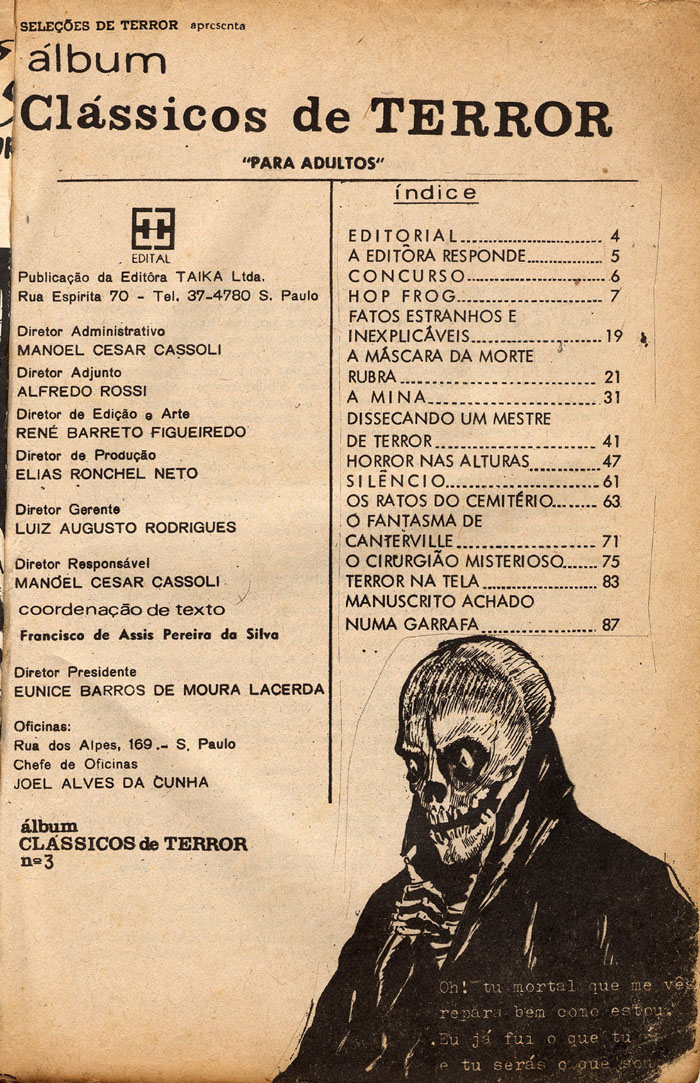 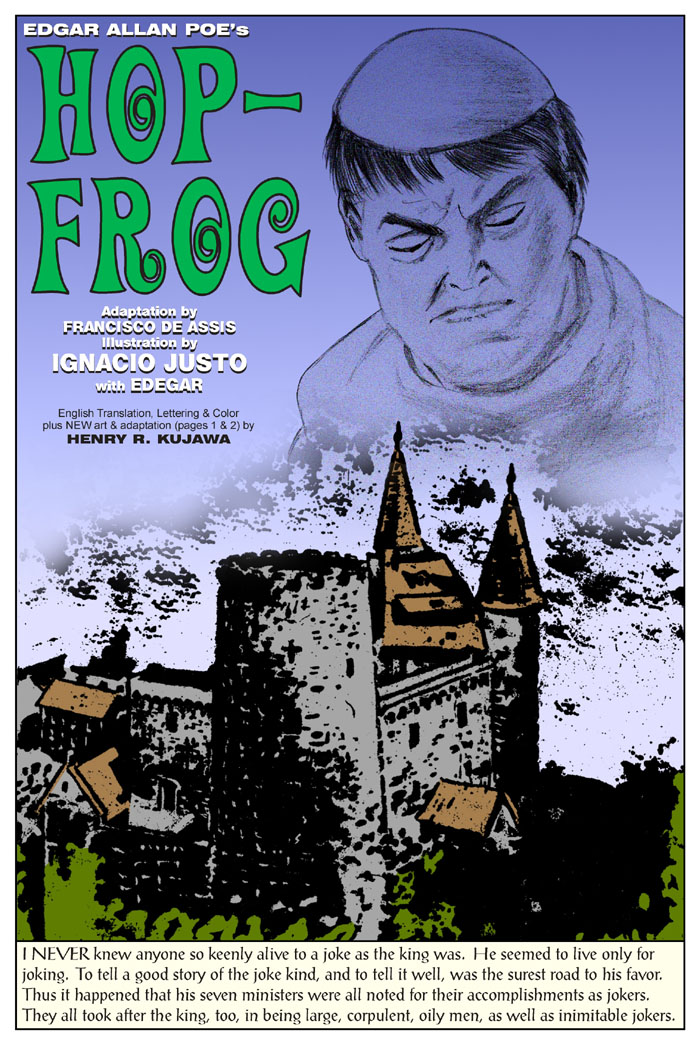 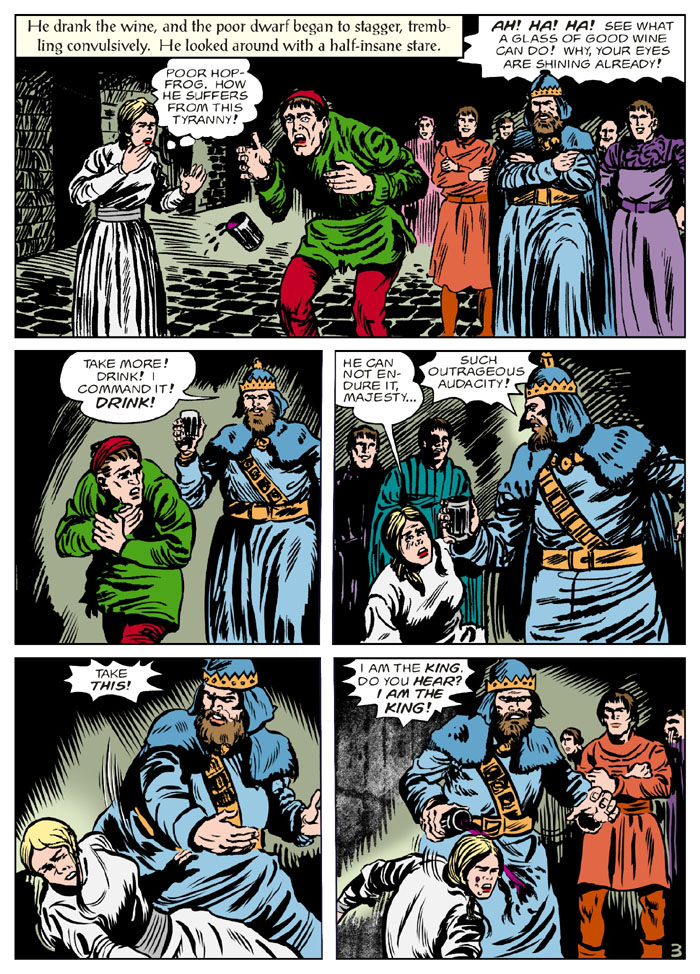 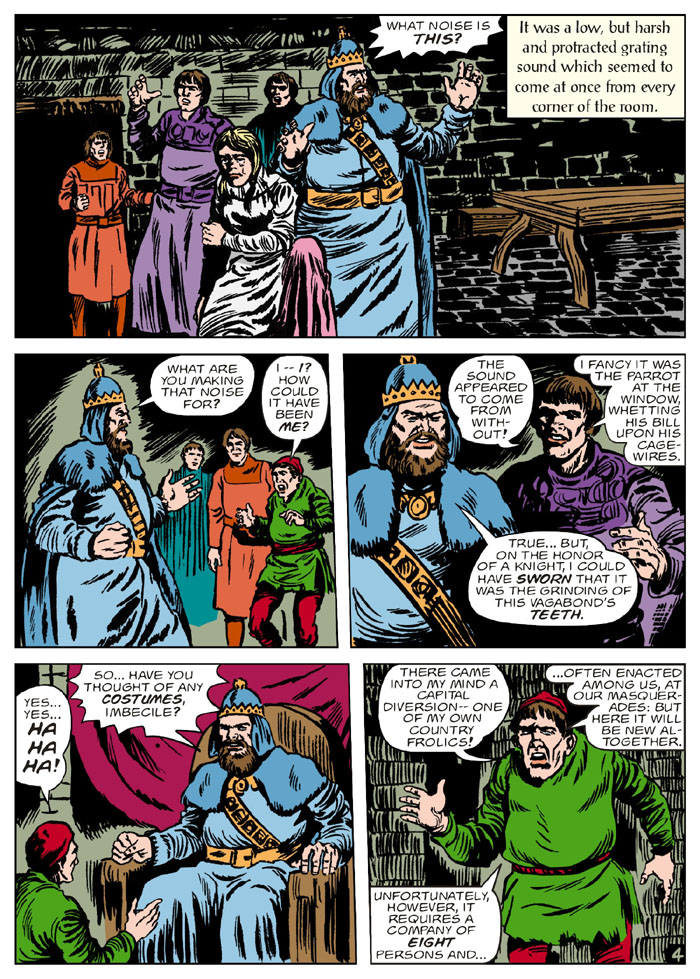 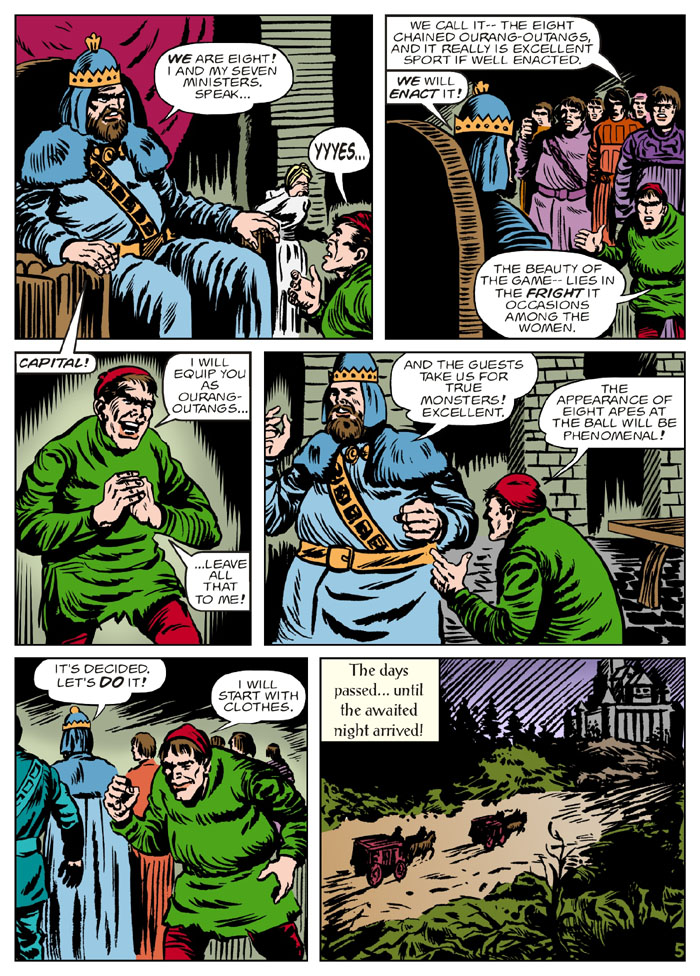 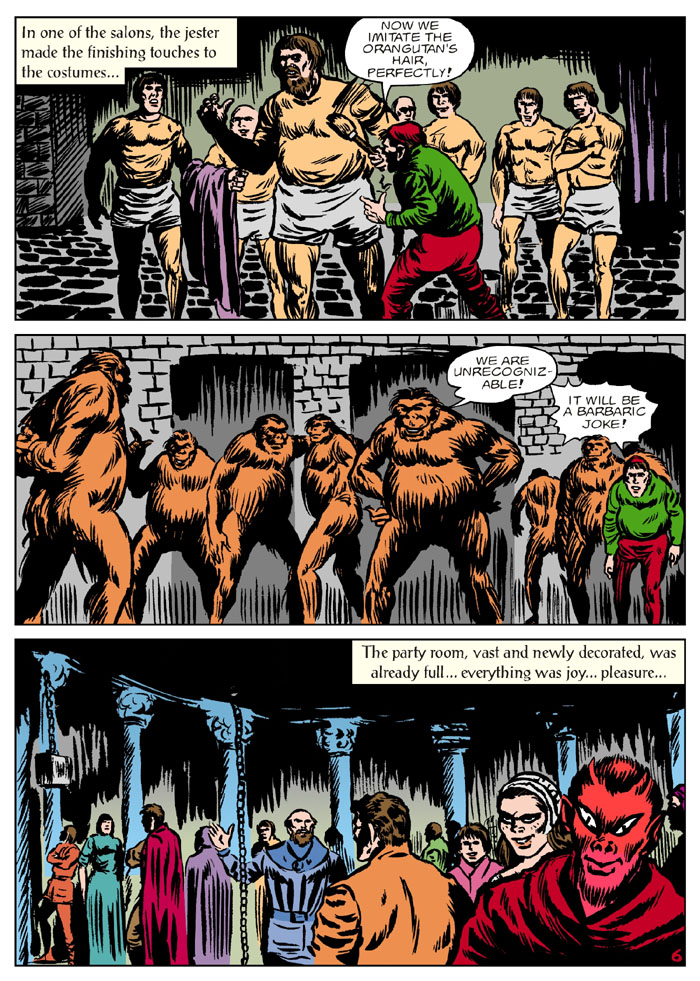 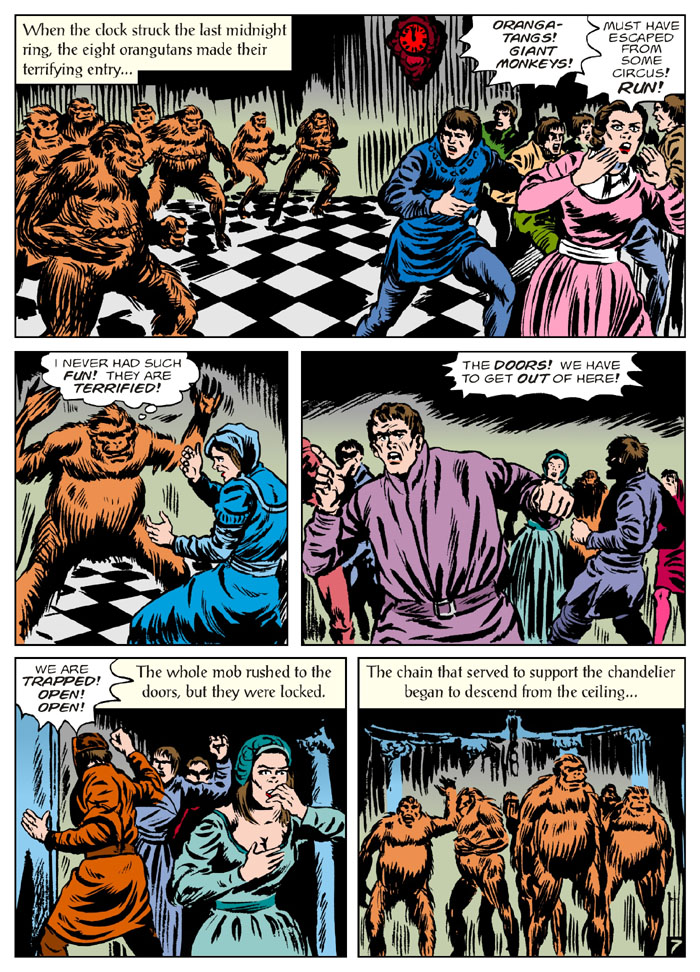 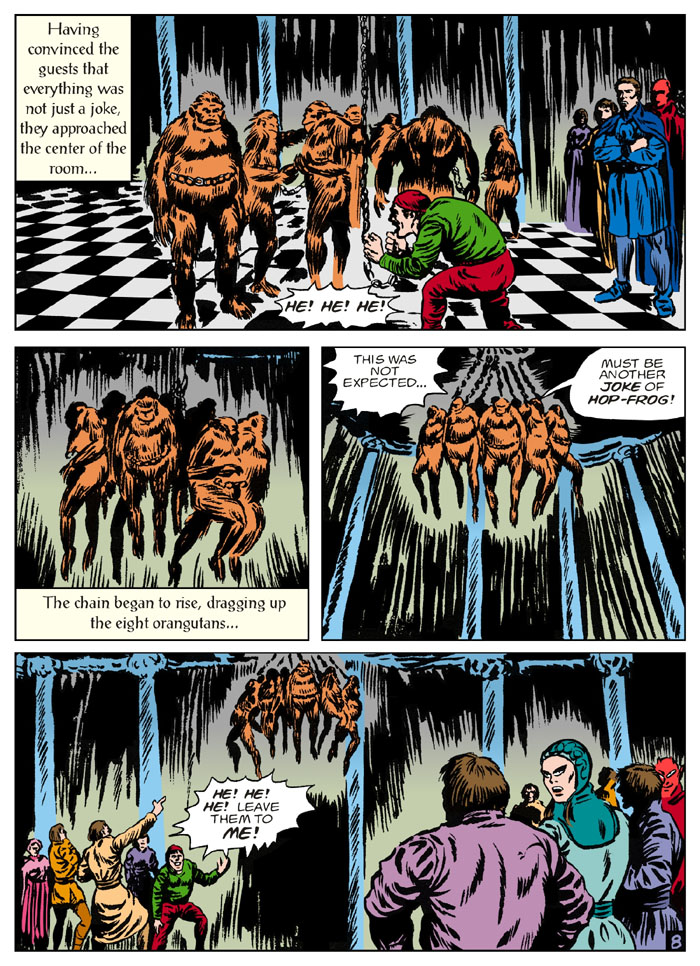 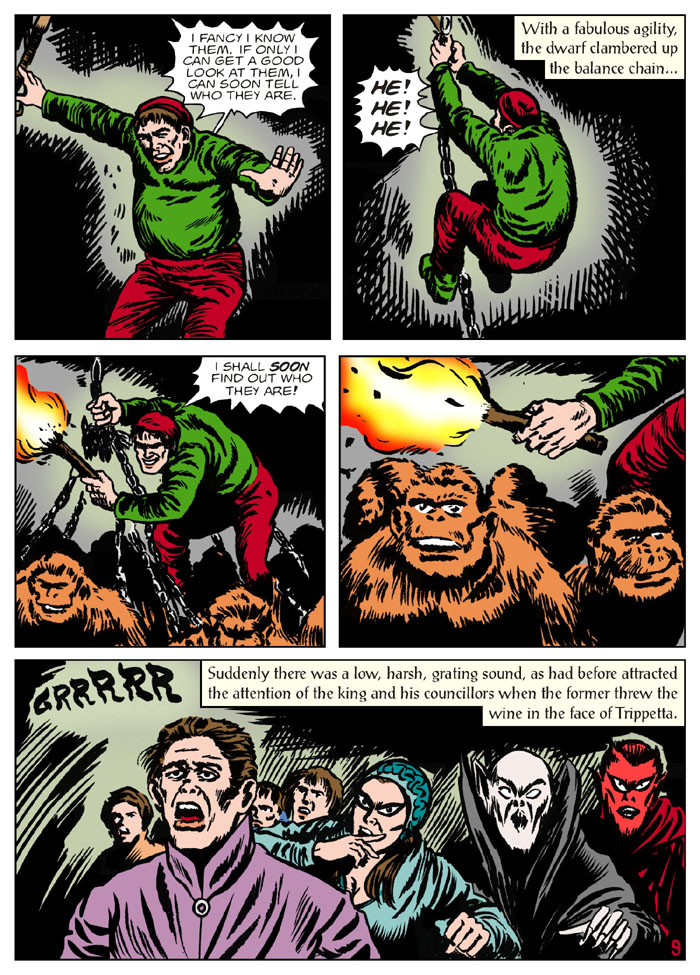 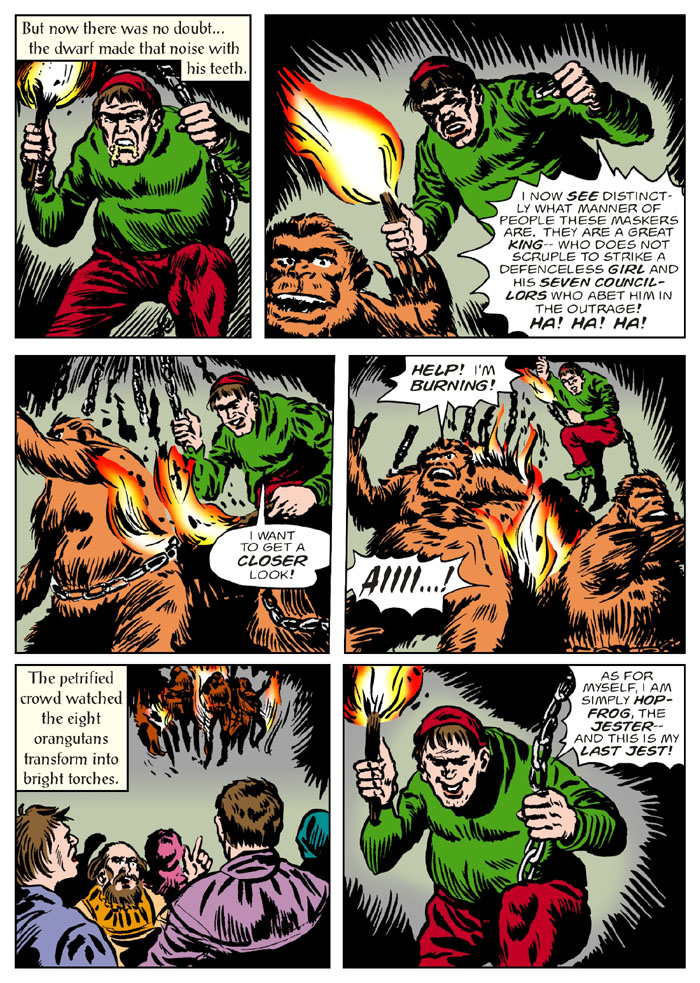 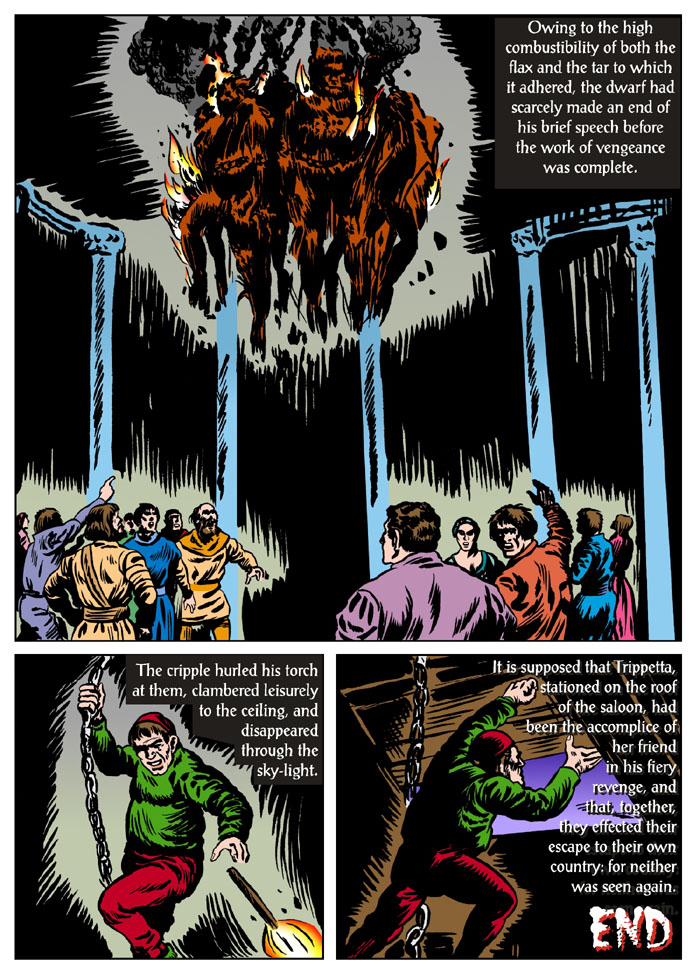 As a bonus, here's 2 photos of Ignacio Justo, from many years apart. 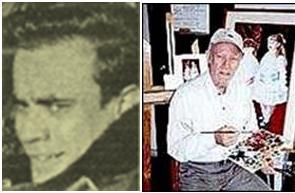 And here's a sample of his "war" comics art. 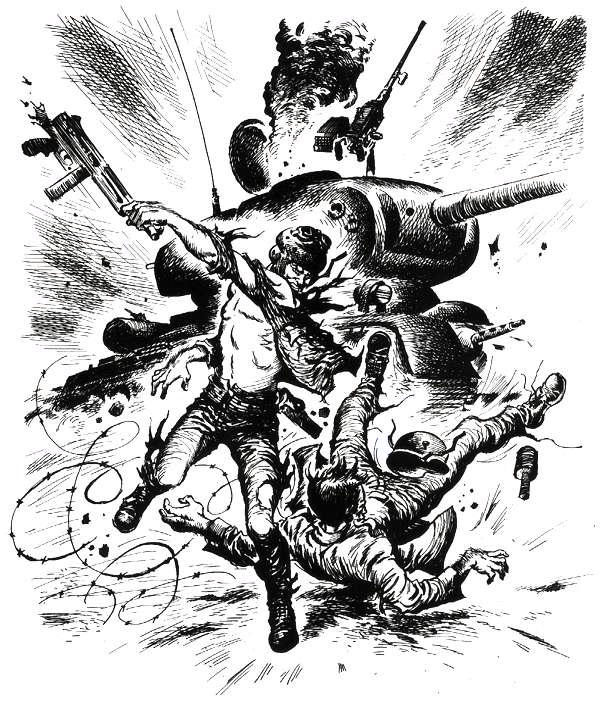 Scans of ALBUM CLASSICOS DE TERROR #3
from MY collection.
Special thanks to Vagner Ferreira Silva.

For more:
Read about Edgar Allen Poe at Wikipedia.
Read a chronological list of Poe's stories at the Edgar Allan Poe Society site.

Read about Hop Frog at Wikipedia.
Read the complete story at the Poe Stories site.