THE VAULT OF HORROR  13
"THE CURSE OF HARKLEY HEATH"

EC (Entertaining Comics) remains one of the most famous-- or infamous, depending on your point of view-- comics publishers of the 1950s.  During a period where a virtual witch-hunt erupted over violence in "children's" literature, they were at the center of it.  The Comics Code Authority-- a self-governing industry organization put together by several of the bigger publishers, while allegedly aimed at "cleaning up" the image of comics in general, in many ways was instead designed specifically to put EC-- their biggest competitor-- out of business!  This kind of behavior and attitude never fails to get me incensed in the extreme.

One of EC's triumverate of "New Trend" horror books, along with THE HAUNT OF FEAR and TALES FROM THE CRYPT, was THE VAULT OF HORROR.  This series debuted with issue #12, having continued from issue #11 of WAR AGAINST CRIME.  This sort of name-change went on all the time when publishers wanted to avoid the cost of paying for additional 2nd-class mailing permits.  Unlike THE HAUNT OF FEAR, they never bothered changing the numbering later on.

EC did a number of POE adaptations over the years, quite a few of them "freely" adapted.  The source material is plainly obvious, but many changes have been made.  This kind of thing can alternatively be a matter of frustration for "purists", or a joy to those who are able to enjoy a finished work on its own terms.

The 2nd of these was, despite major changes and updating, obviously...

"THE FALL OF THE HOUSE OF USHER".

After 3 very faithful adaptations, this one definitely "played" with the source material.

The story was written by one of the most prolific writers of comics stories in the history of the genre, Gardner Fox.  The art was by a pair of men who each went on to great fame in different industries-- Harry Harrison, who later became a novelist, and Wallace Wood, considered by many to be, among other things, the greatest science-fiction comics artist of all time.

I set up stories from the 1950s twice before EC Fan-Addict Facebook group member Josh Burns brought this to my attention, and supplied me with scans on 7-6-2016.  I've been waiting for an opportunity to set this up for almost 2 years now!

Unfortunately, Josh's scans were a bit on the small side, and therefore a bit fuzzy.  "Pappy", who runs a Golden Age Comics blog, responded to a request for better scans.  However, due to some inexplicable glitch, the 300 dpi scans he e-mailed me somehow were 72 dpi when they arrived.  (Neither one of us could figure this out.)  So, I BOUGHT a copy of the 1990 reprint from "My Comics Shop" / "Lone Star Comics" in Arlington, Texas for a measely $2.40 plus shipping (and added in a pair of Jack Kirby THOR comics I'd been wanting for decades to make it worthwhile).  And then I did MY OWN scans, at 300 dpi.  And THESE are the scans I have now posted! 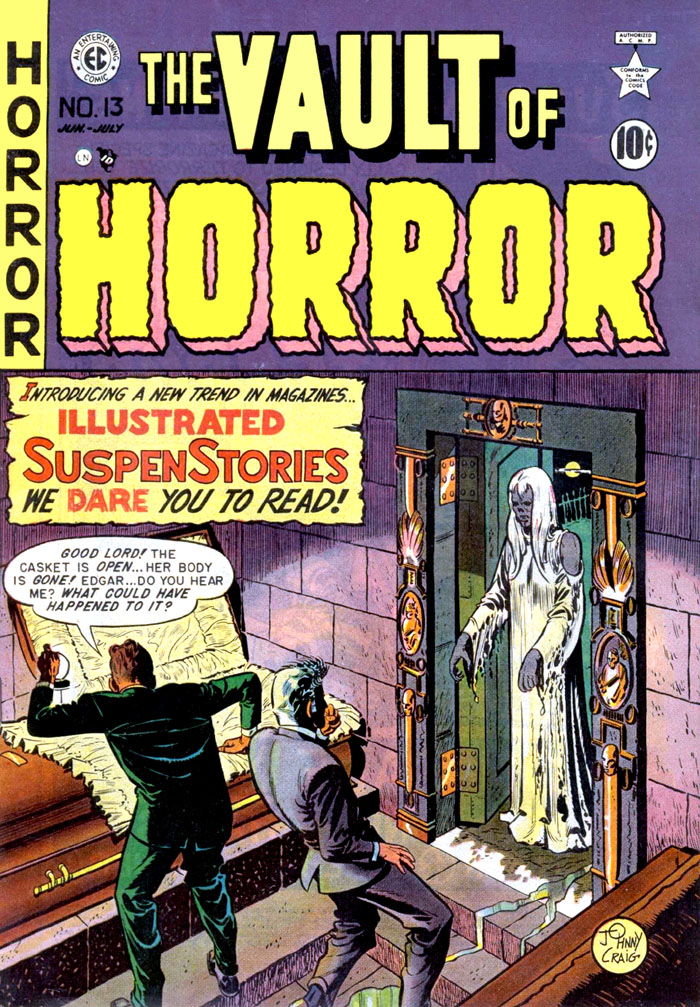 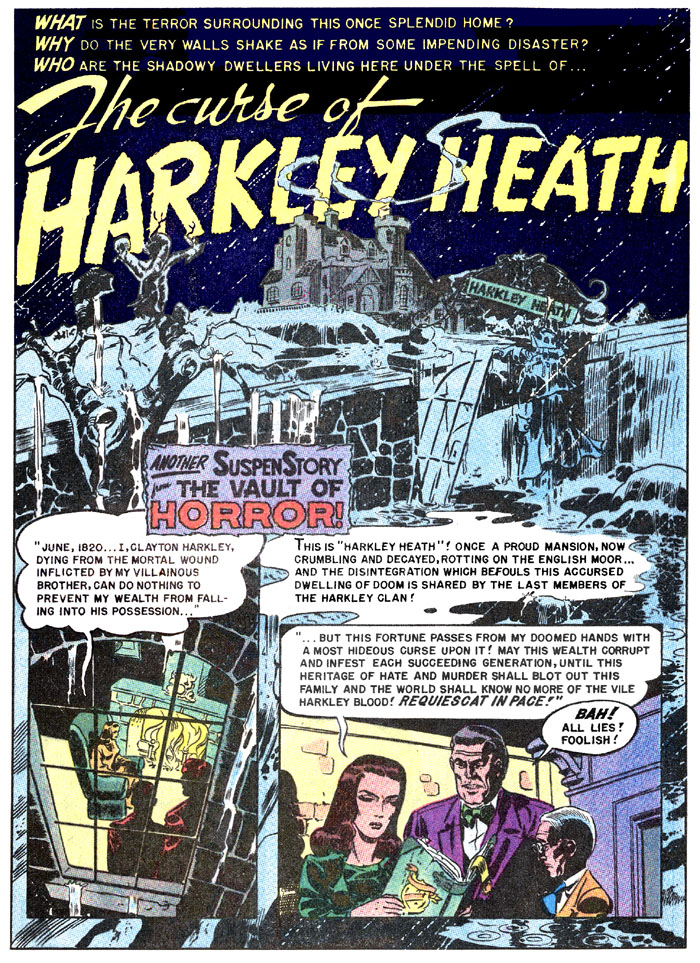 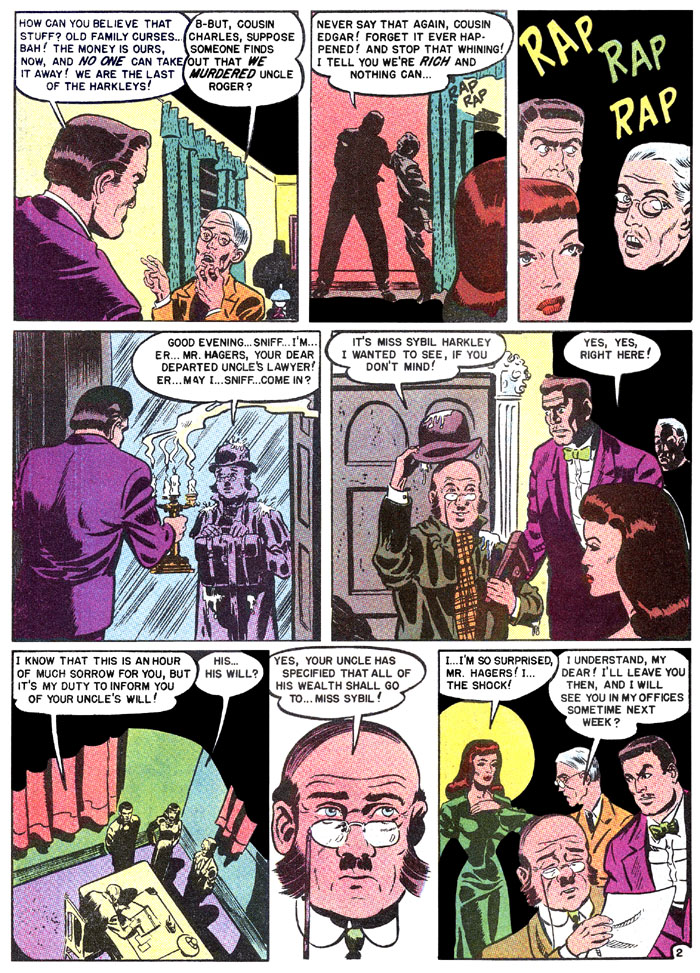 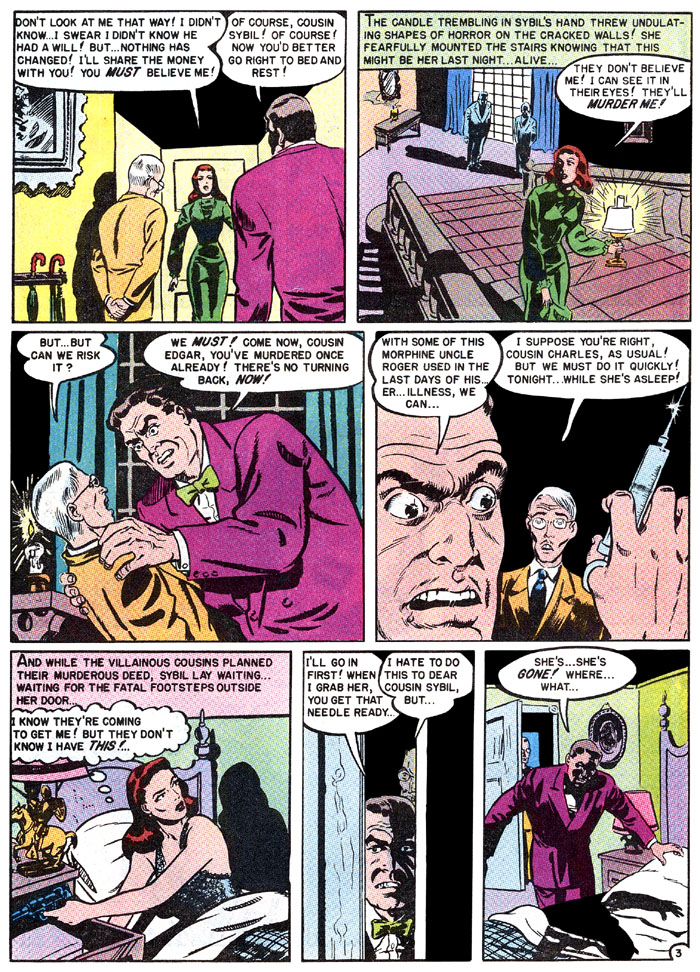 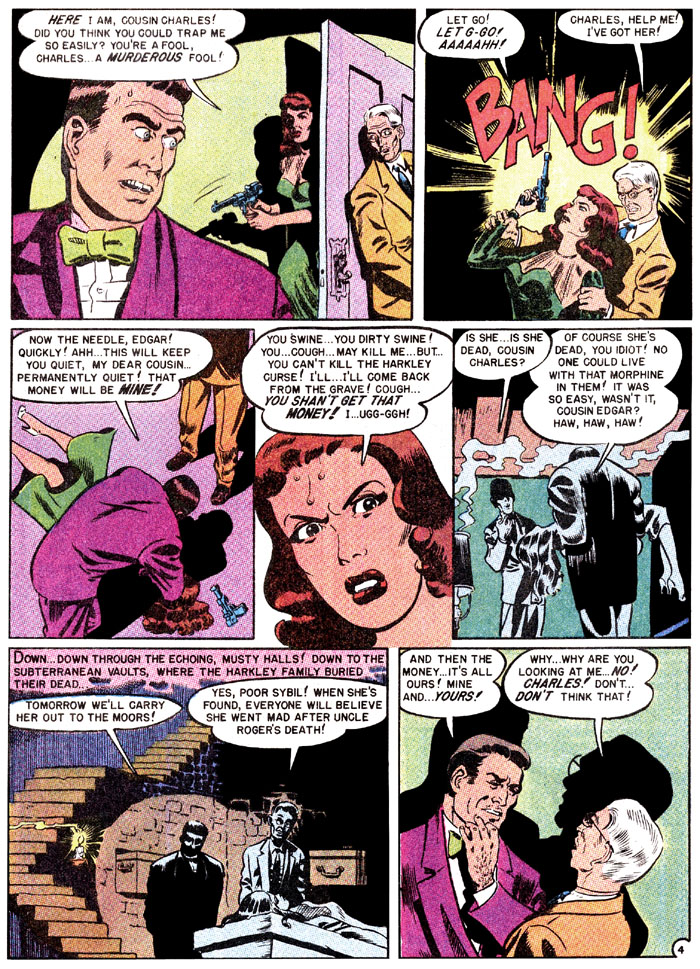 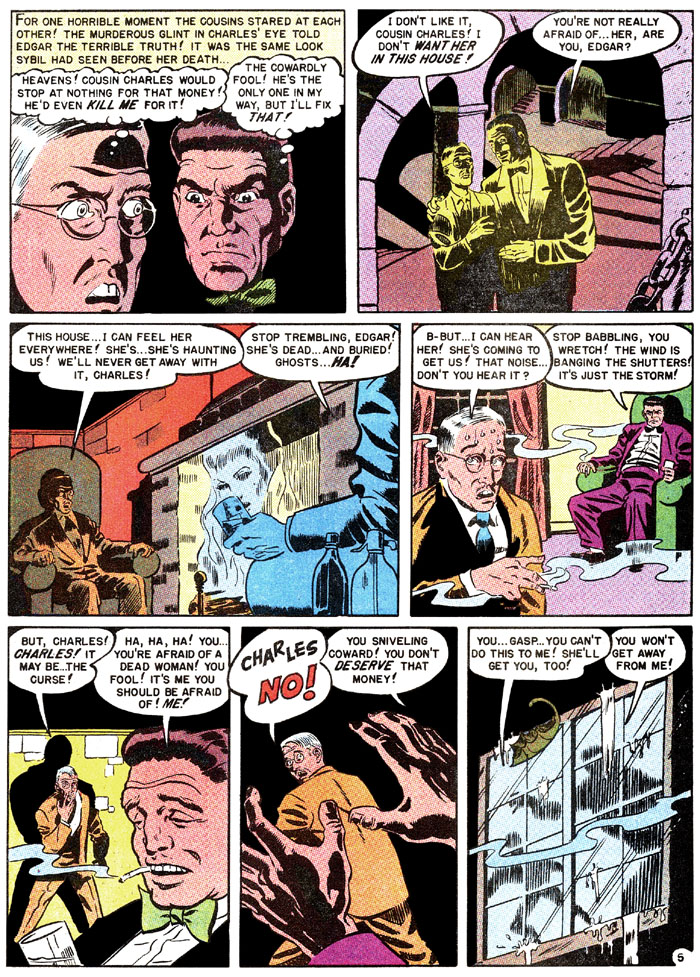 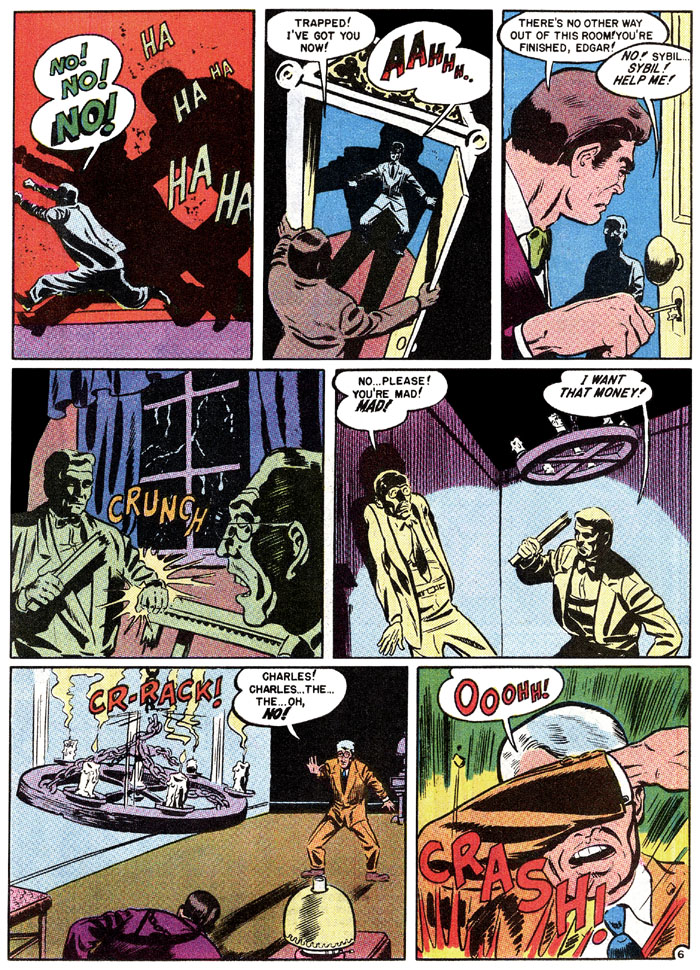 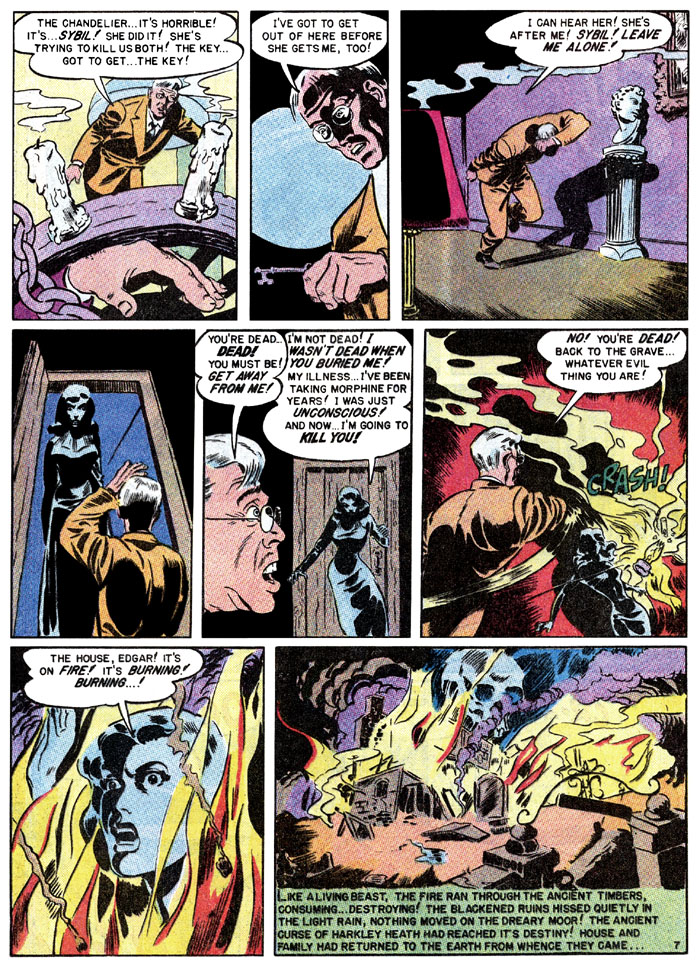 I find it fascinating how later film adaptations so often seem to have borrowed "original" elements from comic-book adaptations.  Here's 2 examples.  In the 1960 Roger Corman - Richard Matheson "HOUSE OF USHER", there's a scene definitely not in Poe's short story, where a chandelier suddenly falls.  While it might be argued this could have been swiped from the earlier Vincent Price film, "HOUSE ON HAUNTED HILL", there's no mistaking such a scene appeared in this 1950 EC comic. 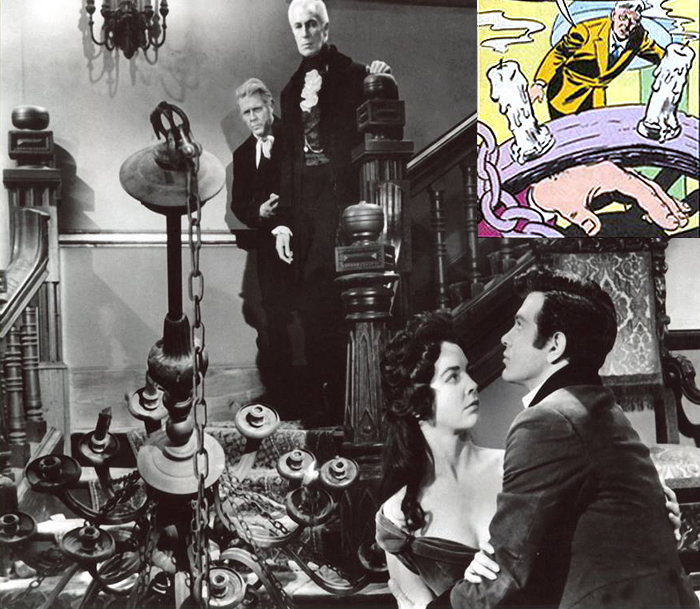 Later, the house is destroyed when it's accidentally set on fire.  It should also be noted that actress Myrna Fahey's "Madeline Usher" looked nothing whatsoever like the deathly-ill sister of Poe's story... but bears a striking resemblance to "Sybil" in this same comic! 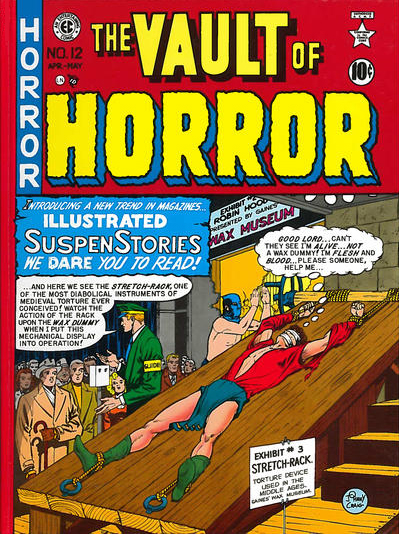 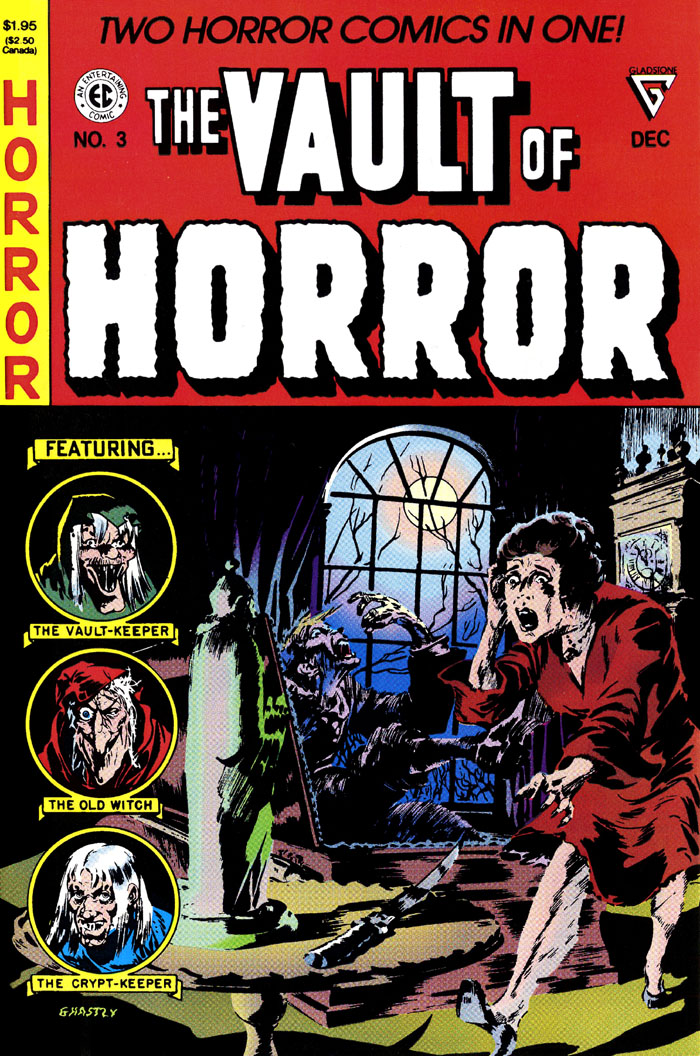 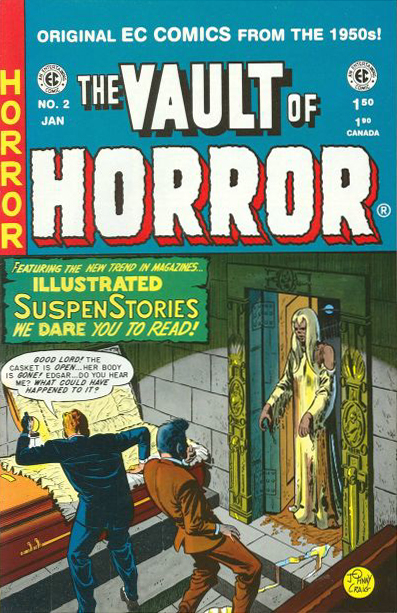 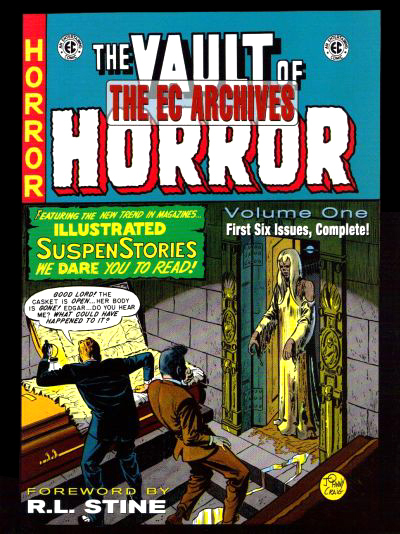 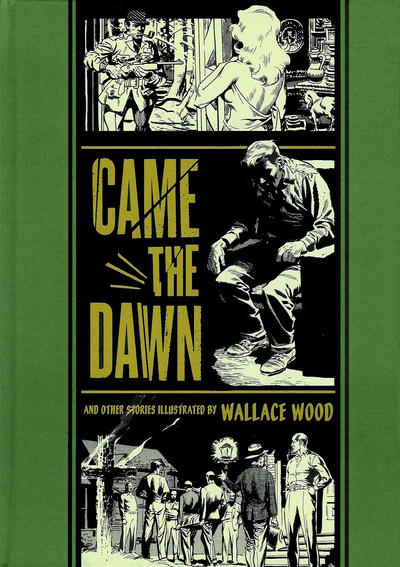 As a special feature, here I compare Johnny Craig's 1950 cover with one by Frank Frazetta in 1965.  While "THE VAULT OF HORROR #13 had a story "loosely" inspired by "USHER", ironically, CREEPY #3 featured "THE TELL-TALE HEART", the 1st Poe adaptation from Warren, who would not actually do "USHER" until EERIE #20 (Mar'69), as their 6th Poe story. 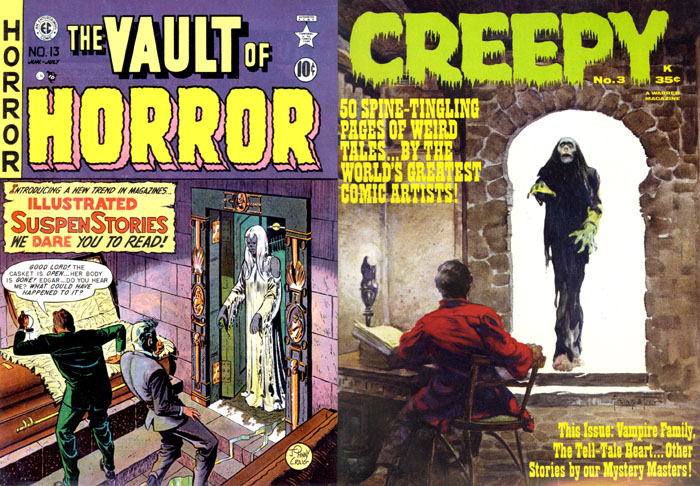 Visit The Mad Comics Of Wally Wood blog!
Visit Booksteve's Horray For Wally Wood blog!
Read my DAREDEVIL blog article to learn the truth about what really went on
during Wood's brief time on this 60s series!

Read about THE FALL OF THE HOUSE OF USHER at Spark Notes.
Read the complete story at the Poe Stories site.
See the HOUSE OF USHER Gallery of Illustrations.