Ever since I got obsessed with the original GHOST RIDER from Magazine Enterprises (every single episode illustrated by the same artist-- Dick Ayers!) I found myself looking around online at other M.E. publications, trying to see what else they put out that might be of interest to me.

Apart from their westerns (Frank Bolle, who'd I'd first seen doing work for Warren in the late 60's, became a favorite thanks to his work on TIM HOLT / RED MASK), the other thing that caught my eye was the work of artist Bob Powell.

Over the years, I've often run across mention of Powell, whose work in the 50's was highly respected. Unfortunately, it seems like too many of his contemporaries (Dick Ayers & Don Heck among them), his status among comics fans fell as time went by, perhaps because of lack of visibility on "popular" series, perhaps because of shoddy reprints where the art was usually reduced in size, eliminating detail and destroying visual impact.

If one went purely by his short time at Marvel in the 60's, one could easily wonder what the fuss was about.  Apart from 3 issues of DAREDEVIL and a Torch & Thing episode in STRANGE TALES where he was inked by Wally Wood, nothing he did at Marvel really stands out. This is ironic when I consider one of the most visible projects he ever worked on also hapened to be my first exposure to his work, though it was decades before I ever knew it!  Yep, I'm talking about the 1966 BATMAN bubble gun cards, where he did the drawings that Norm Saunders painted over. My best friend once commented those things looked like "film noir", and I agreed with him.

All of which brings me to Powell's work for M.E.  I haven't read much (if any) of the stories he illustrated for them, but I have seen some of his covers.  And pretty much ALL of them have totally blown me away. It's clear to me this is a guy who, if left to his own devices (not forced to "flesh out" a mere plot outline, not doing pencils over someone else's layouts, and not having his pencils inked by someone else) could obviously create EYE-POPPING visuals! I keep trying to imagine how Marvel's DAREDEVIL might have looked if he'd done the art SOLO. (But then again, Stan Lee would have been at a total loss, since someone would have actually had to WRITE the book for him!!!)

But anyway... the subject of this post is Powell's M.E. covers.  First up is JET #1, starring Captain Jet Powers.  Near as I can tell, he only appeared in 5 comic-books originally-- 4 issues of his own book, and an issue of THE AMERICAN AIR FORCES, where one leftover episode appeared when JET was cancelled.  At the moment, I know nothing about this character... I just know I LOVE these covers!!!  And ever since I first laid eyes on them, I've had it in my mind to do restorations of them, so others could appreciate them as  much as I do.  ENJOY! 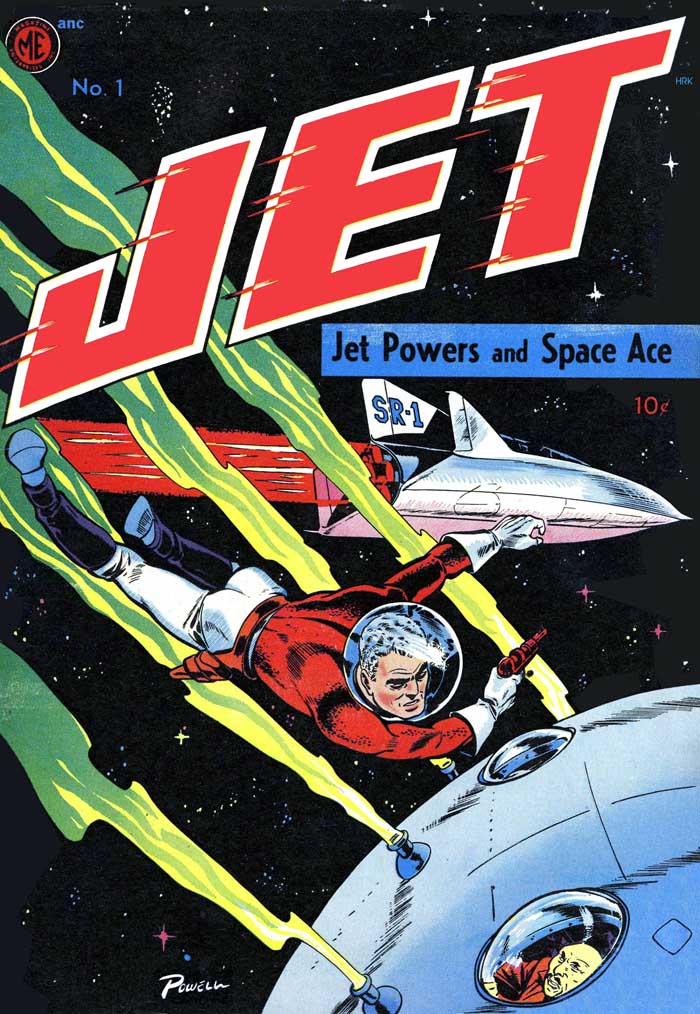 Actually, I take it back. I think Powell would have been a much better fit for SUB-MARINER, and certainly a better fit than Gene Colan ever was (I'm sure that opinion is bound to cause controversy!). On Subby, Powell could have done science-fiction, adventure, sexy women, monsters, etc. DAREDEVIL... well, that was always a book that never seemed to know what it wanted to be.

Meanwhile, I just ran across a website where all 4 issues of JET can be read online! Check it out...
http://furycomics.com/viewer/6/Jet_Powers/ 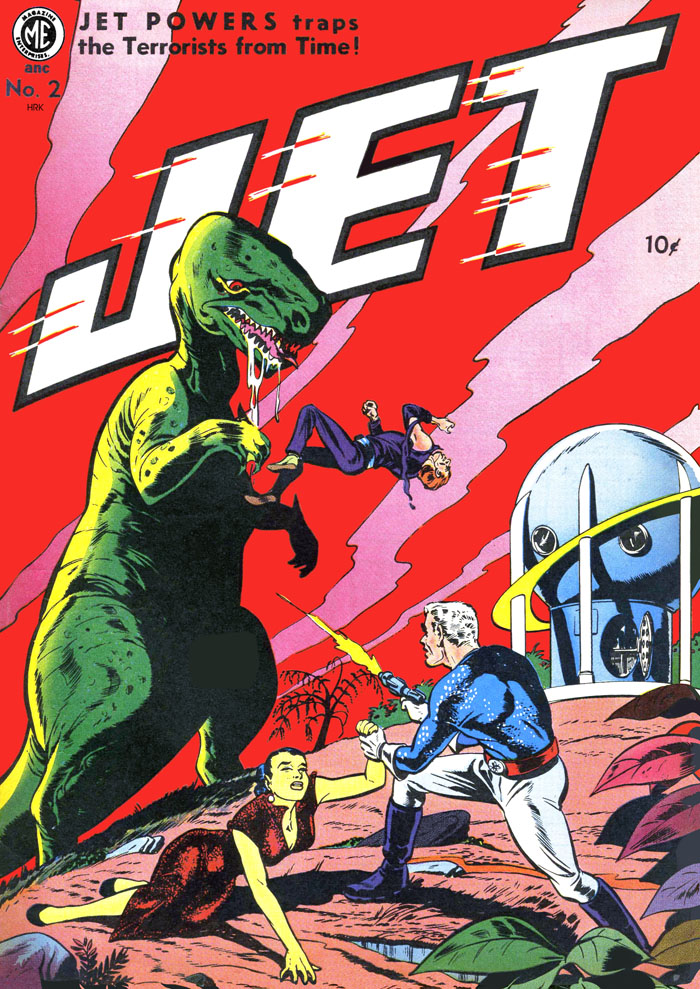 A-1 #35  /  JET 3  /  art by BOB POWELL   (1951)
Another one that took at least 4 hours to clean up. The one thing I don't get about this is, Powell went to some lengths to include rendering on the main figure which would indicate where the colorist should add a "shadow" tone-- but the colorist ignored it. Heck, I would have put a 2nd tone in there! 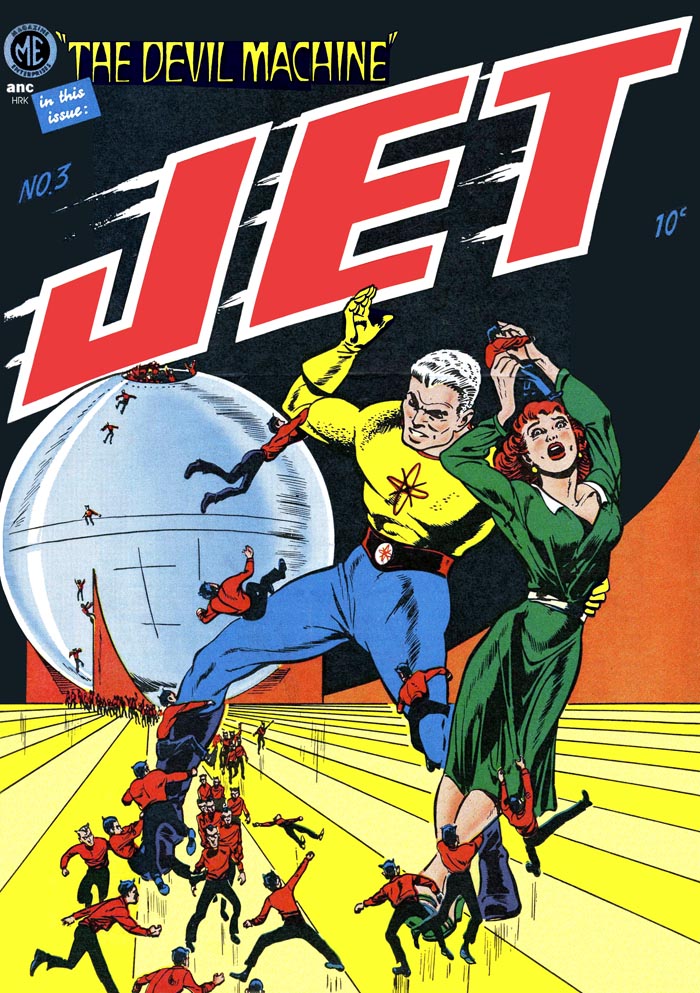 A-1 #39  /  JET 4  /  art by BOB POWELL   (1951)
The final issue.  After this, Bob Powell illustrated an entirely DIFFERENT character, also named "Jet Powers", in THE AMERICAN AIR FORCES; but apparently, the 2 characters had nothing in common, except for the name and artist. 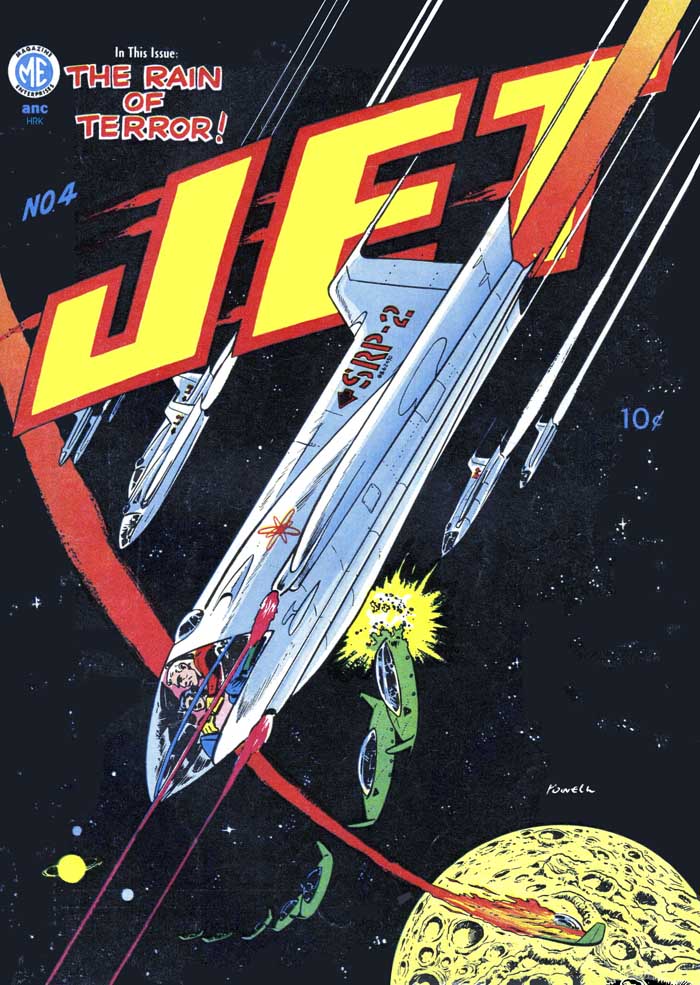