With the 9th IRON MAN episode, the team of Jack Kirby (uncredited stories), Robert Bernstein (dialogue) and Don Heck (art) was dissolved.  While Kirby remained (behind the scenes), "editor" Stan Lee took over dialogue and brought in Steve Ditko, who had proven he could supply stories on his own on both AMAZING SPIDER-MAN and DR. STRANGE. As it happens, Ditko got on IRON MAN the same month that DR. STRANGE became a regular monthly feature in STRANGE TALES.

The first thing Ditko did was re-design the hero's armor, replacing the bulky yellow outfit with a more stream-lined red-and-yellow, which became the norm for "Shellhead" for the bulk of his career from then on. The down side was, doing 3 series at the same time apparently made it impossible for him to ink his work on IRON MAN, and they went thru 3 inkers in a mere 3 episodes (Don Heck, Dick Ayers, Paul Reinman).  In the middle of this, DR. STRANGE expanded from 5-page installments to 8-pagers.

Perhaps Ditko preferred doing full art, or perhaps Stan wasn't too crazy about the visual result (I know I wasn't), but after only 3 Ditko episodes, Don Heck returned for TALES OF SUSPENSE #50, the issue that introduced Iron Man's #1 arch-enemy-- The Mandarin! In retrospect, it seems to me Jack Kirby planned to give Shellhead an evil Oriental as his nemesis from the beginning, but perhaps his "editor" felt The Yellow Claw was too close to Dr. Fu Manchu for comfort in the 1960's. (If so, it's ironic that in 1965, Harry Alan Towers began a 5-picture Fu Manchu series starring Christopher Lee.)

The style of the stories changed radically between Don Heck's earlier episodes and his return, enough to convince me that he was now writing the stories himself, from ideas and with villains still supplied by Jack Kirby. Lee began bringing more humor to the mix. To me, SUSPENSE #50-72 was the "Golden Age" for IRON MAN stories, and Don Heck, "THE" IRON MAN artist!  As he had done earlier with Kirby's armor design, Heck modified Ditko's armor, creating possibly THE most iconic version of it EVER. Of course, the irony there is, during his entire run on the series in SUSPENSE, only 1 cover featured Don Heck pencils, and that was slapped together by Sol Brodsky in the production department from interior panels! 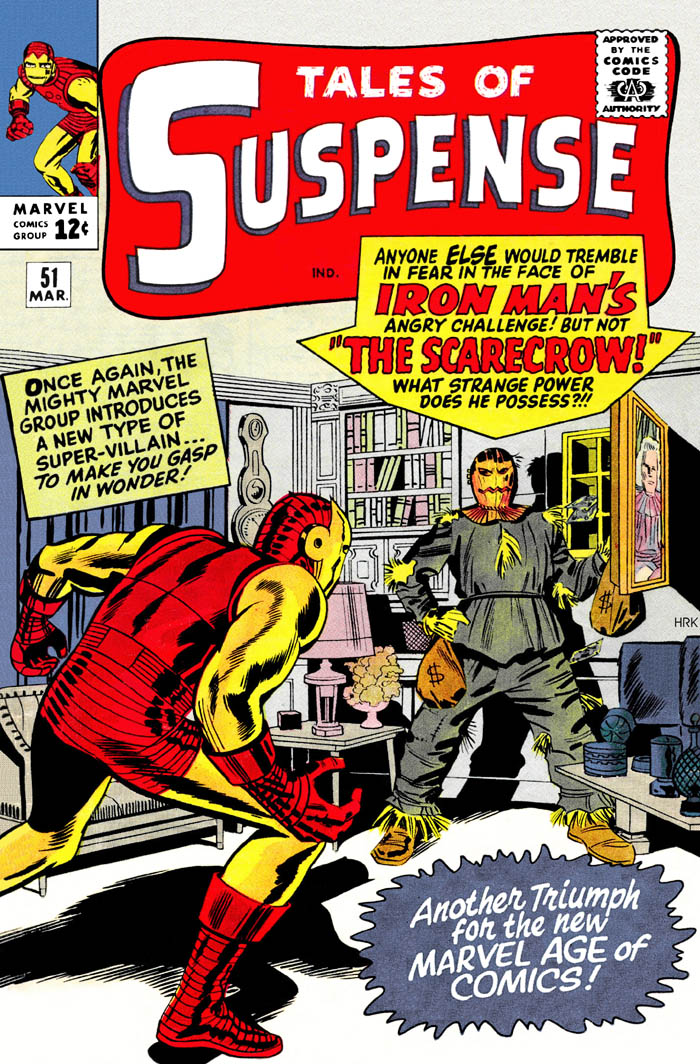 TALES OF SUSPENSE 52  /  art by Jack Kirby & Paul Reinman   (April 1964)
Special thanks to Mitch Scheele for supplying me with my copy of this issue! 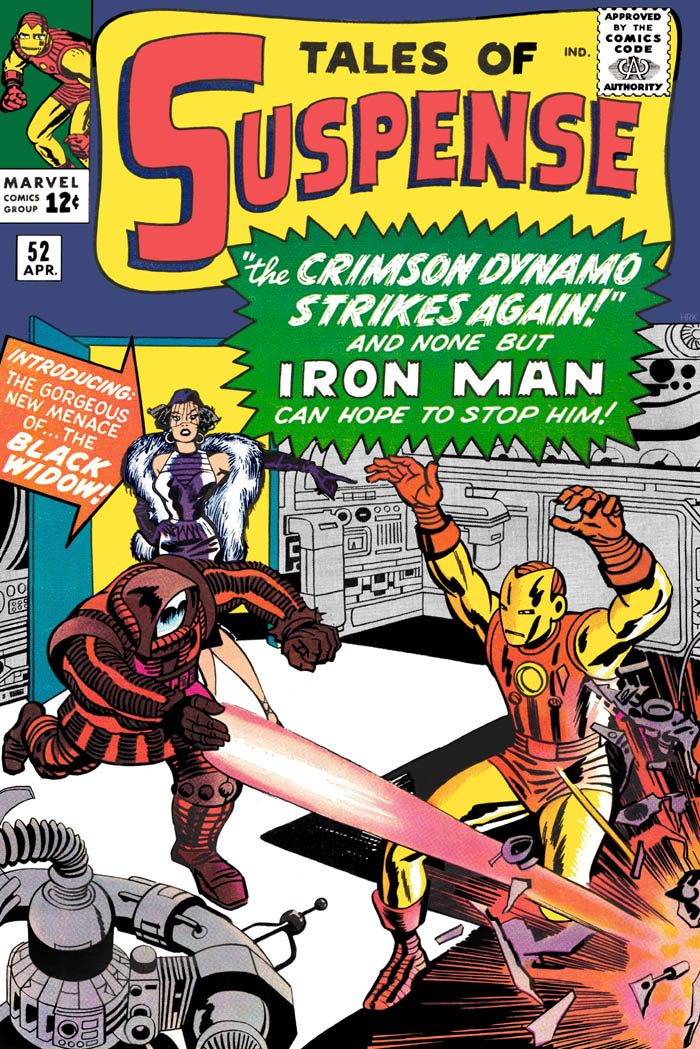 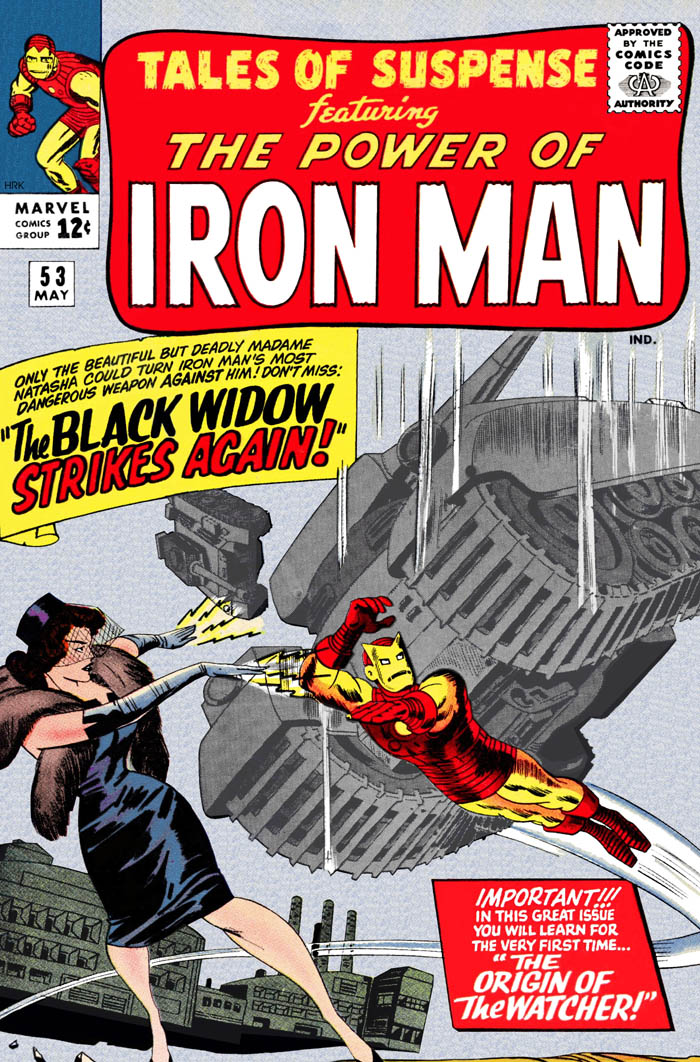 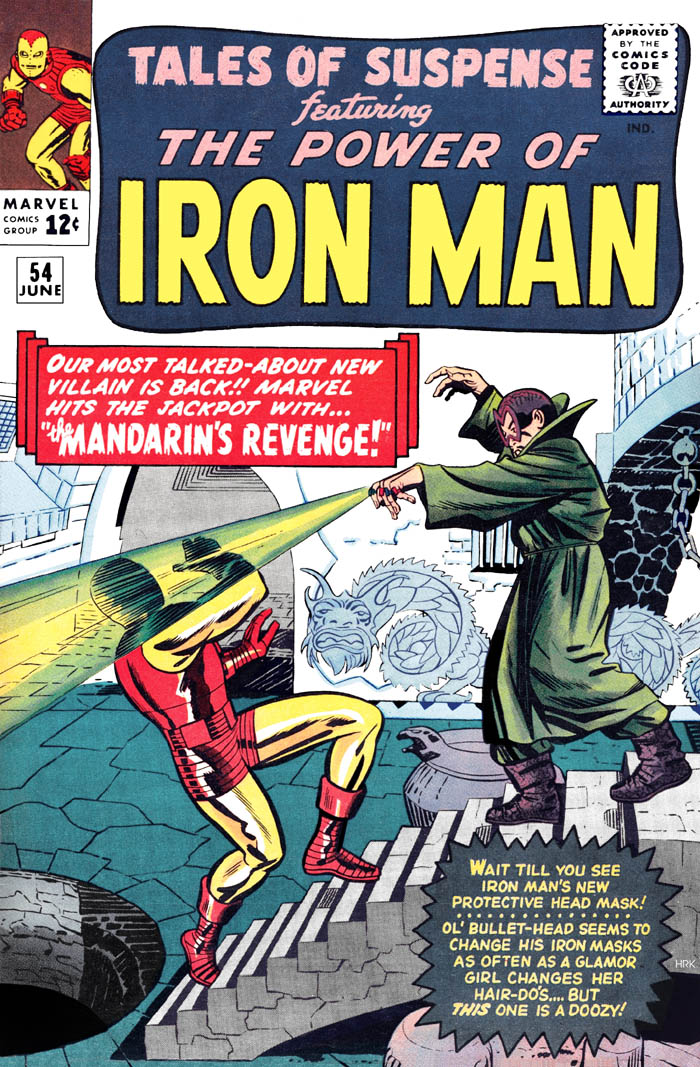 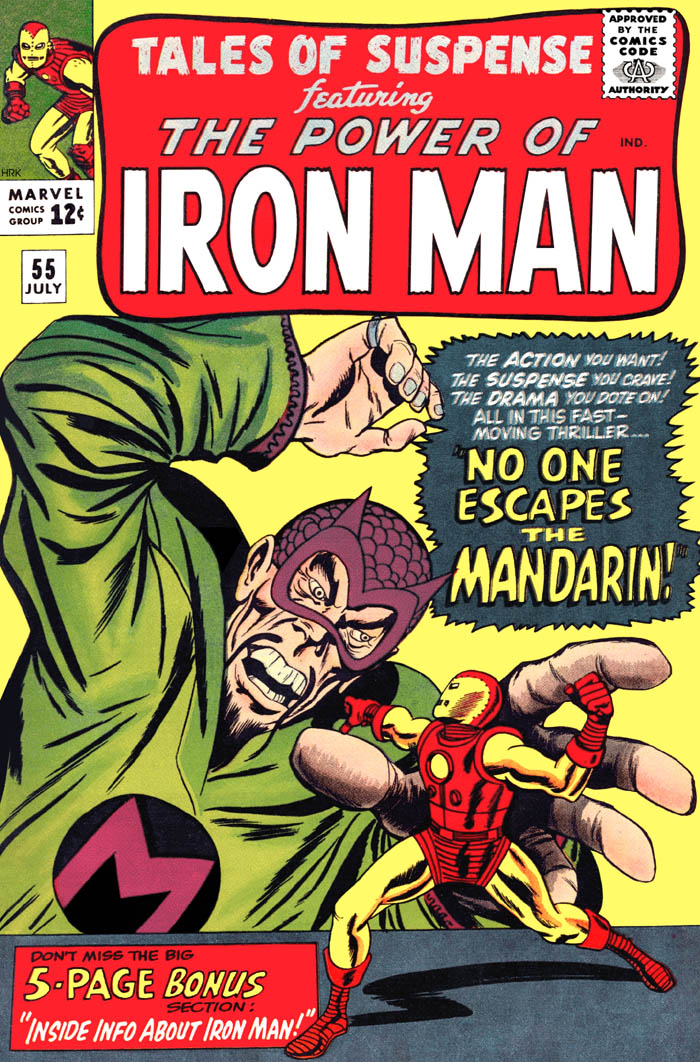 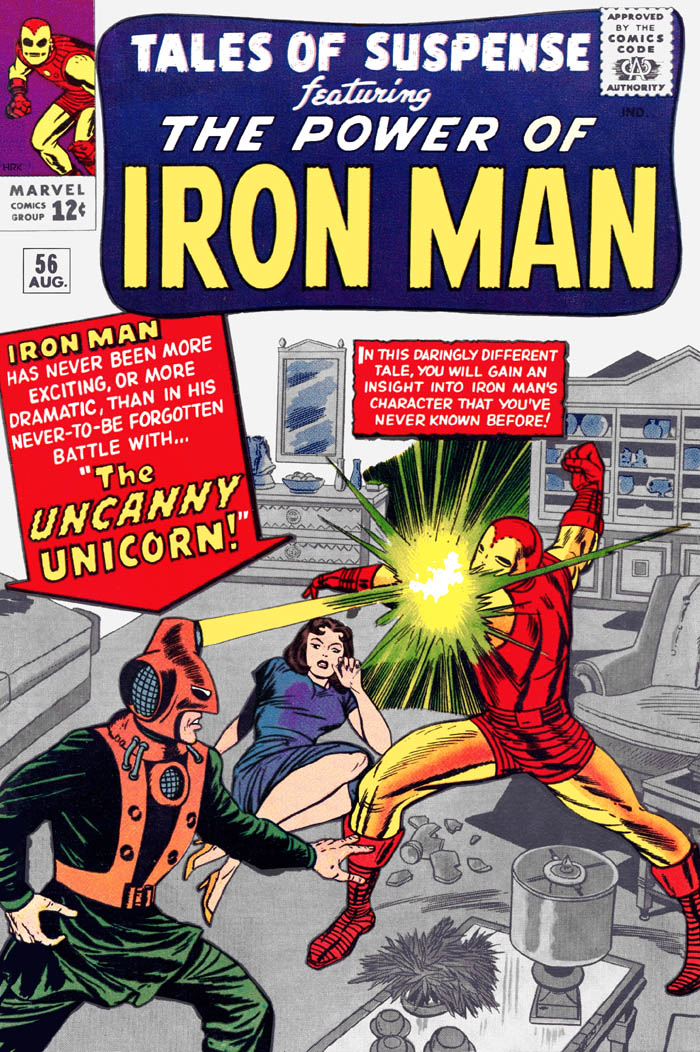 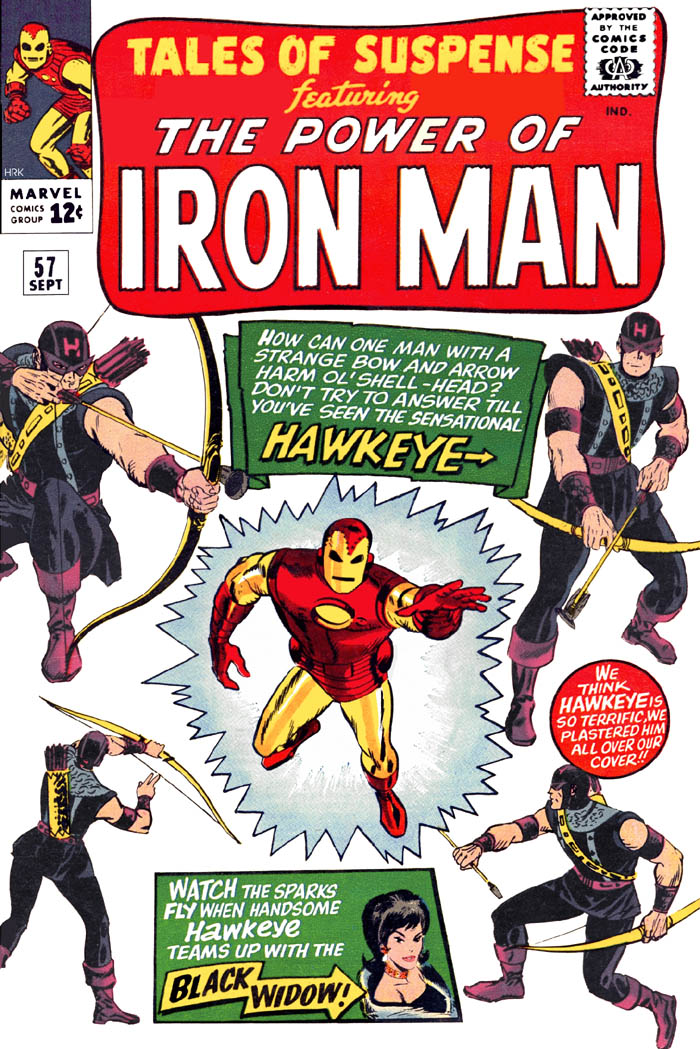 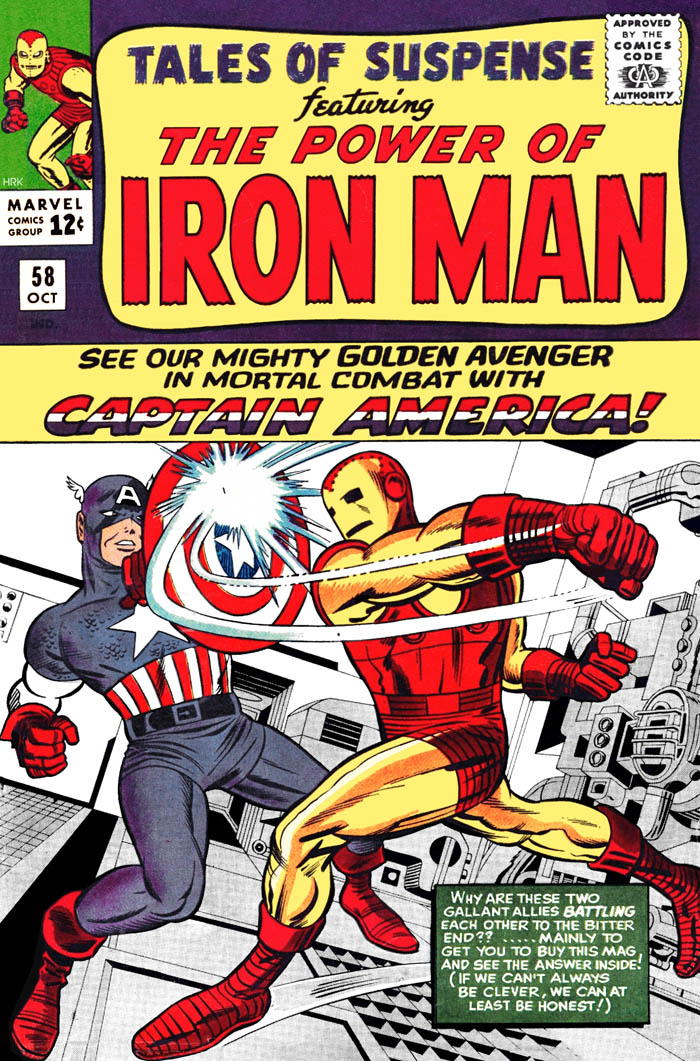 With this issue, Iron Man was joined by Jack Kirby's CAPTAIN AMERICA, who had returned from comic-book limbo in THE AVENGERS #4 only 6 months earlier. He guest-starred in this issue's I.M. episode (as did the rest of his team-mates), then was given his own feature the following issue. Ironically, when SUSPENSE was split into 2 separate books in early 1968, Cap's book continued the SUSPENSE numbering rather than Shellhead's. 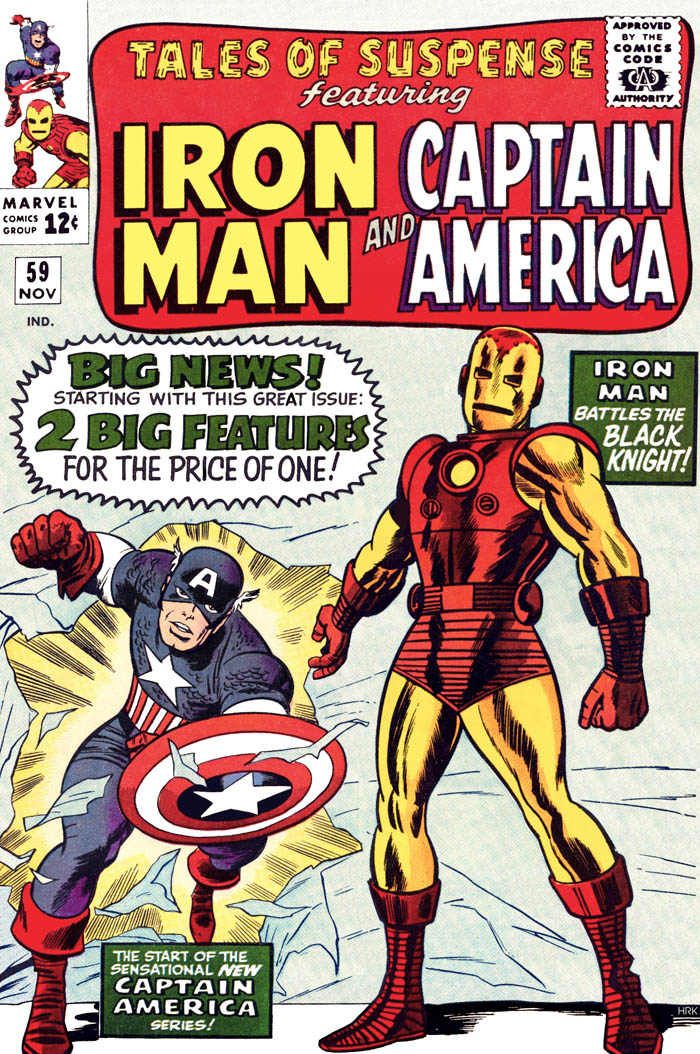 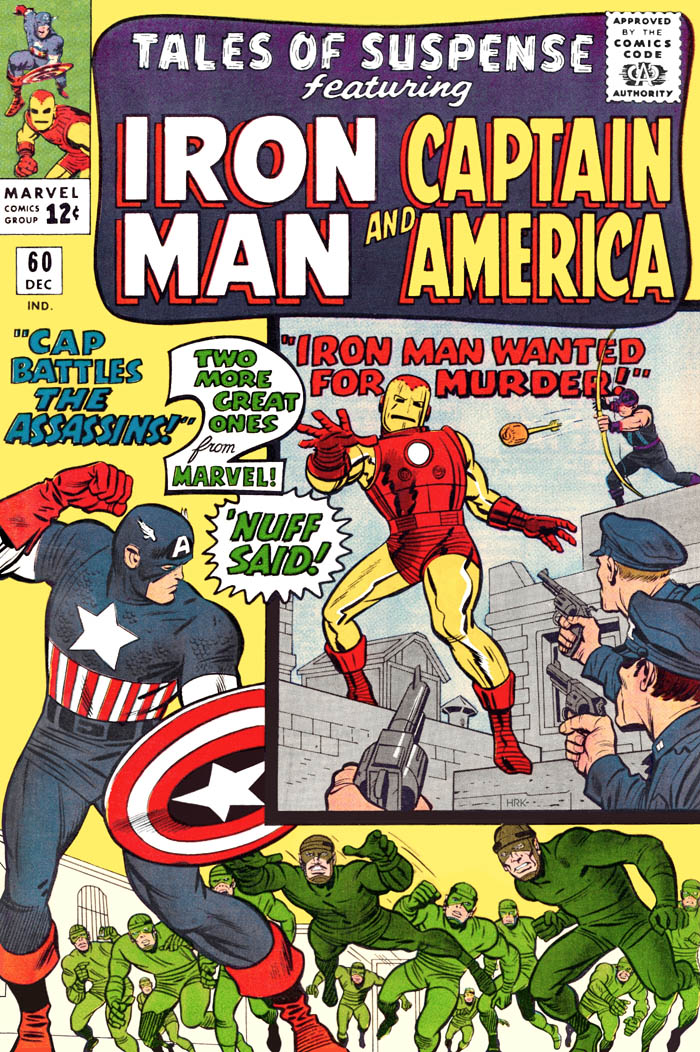