6th up, a story that proved elusive for quite some time...

This was the 1st comics version of this story.  It wouldn't be the last!

I ran across this during my search, listed on the cover of SPEKTRO #3 (Editora Vecchi / Oct'77). While many issues of that series have been posted online in their entirety, this one... hasn't.  Via a blog (found during another online search), I discovered the artist was Flavio Barbosa Mavignier Colin, whose career spanned several decades and multiple art styles.  And, as I suspected (following my investigations into Luiz Saidenberg's "O Gato Preto"), the SPEKTRO appearance was a reprint!  The story had actually debuted in the early 1960s, in an issue of CLASSICOS DE TERROR.

But WHICH one?  I don't know for sure.  Through a process of elimination, it seems most likely it was CDT #8, as fellow fan Toni Rodrigues has told me he has every issue from #1-20, except #8.  Further, when I initially set this page up, I only had 2 pages (from a blog).  But I figured, what the heck.  I'll put 'em up ANYWAY.  A 3rd later turned up (from a selling site).  Despite only having these 3 pages, I did the English translation.

Then, on May 7, 2017-- just about 2 YEARS after I first became aware of it-- I happened to check out the GDQ database site page for this series, and, to my astonishment, someone had posted the cover for issue #24!  Up until that moment, I could only be sure there had been 22 issues.  And, there is was-- under a glorious Jayme Cortez cover.

The GDQ lists the people who upload covers, and I got in touch with Marcelo Ferreira Antunes, asking if there was any chance of his supplying me with scans.  Again-- to my amazement, 2 days later, he sent them by e-mail.  WOW!!!  Toni Rodrigues has told me that when Vecchi reprinted the story in SPEKTRO, they had somehow totally re-formatted it.  HE WASN'T KIDDING!!!  Naturally, after wanting to get my hands on this for so long, whatever else I was in the middle of got put on hold, so I could tackle this one NEXT.

I've really gotten to love Flavio Colin's simple, graphic, "cartoony" style.  Which makes his earlier, more "realistic" style here all the more of a surprise.  He may be the ONLY cartoonist in Brazil I've run across whose work was clearly inspired by Frank Robbins!

This would be his 1st of 4 POE adaptations. 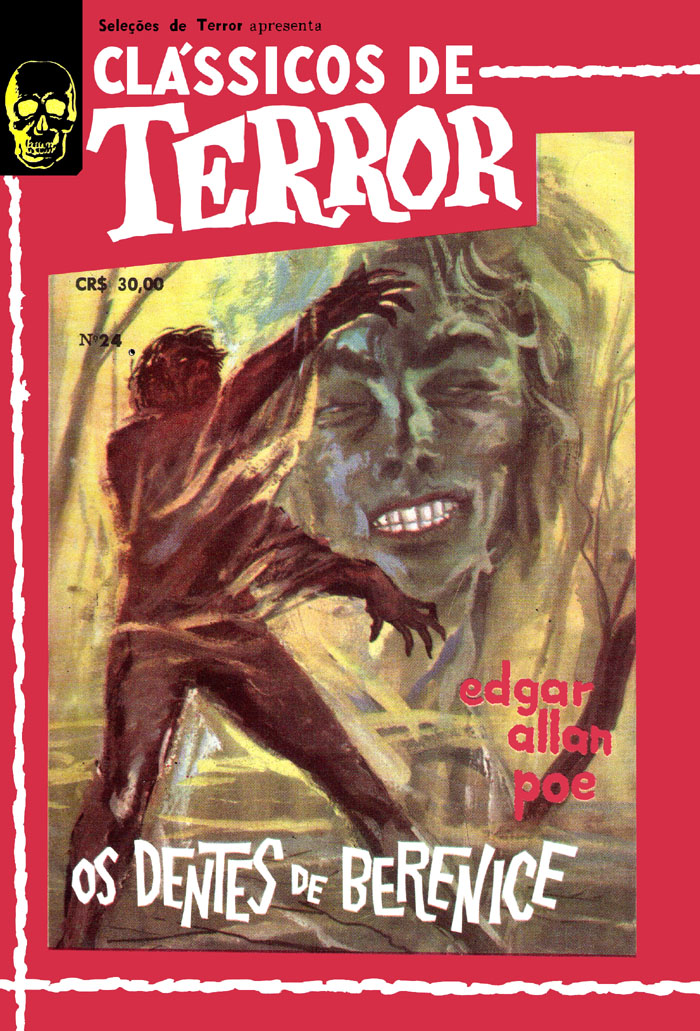 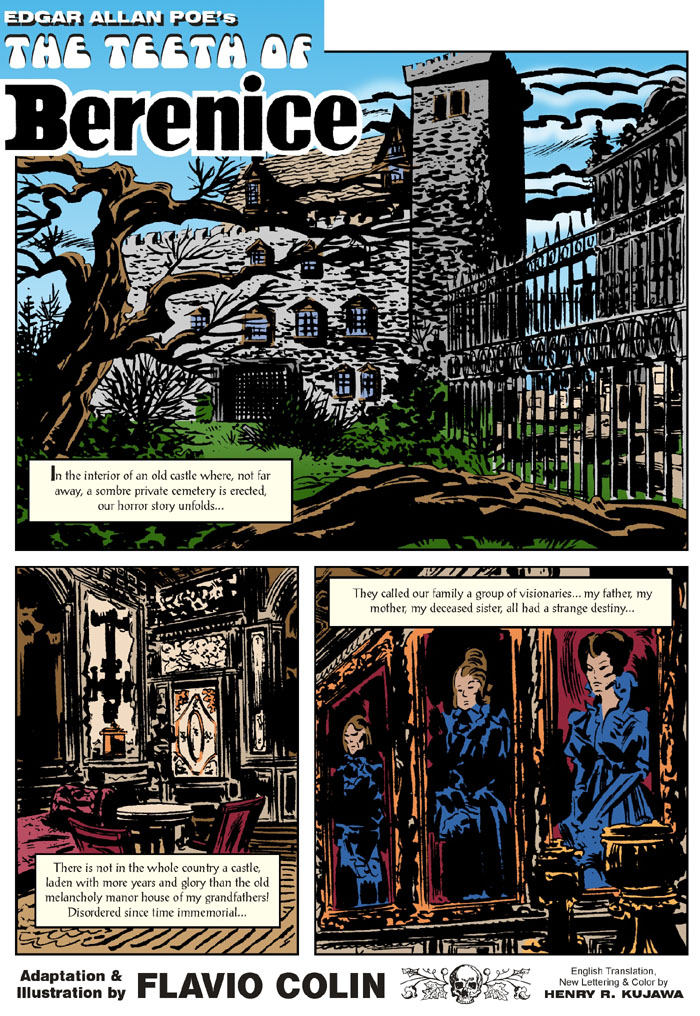 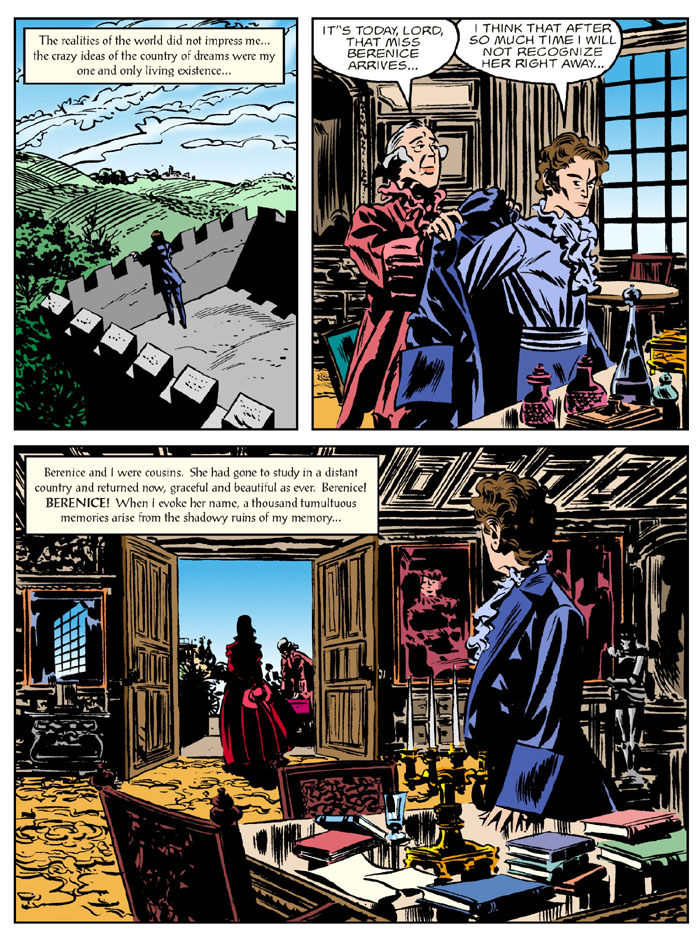 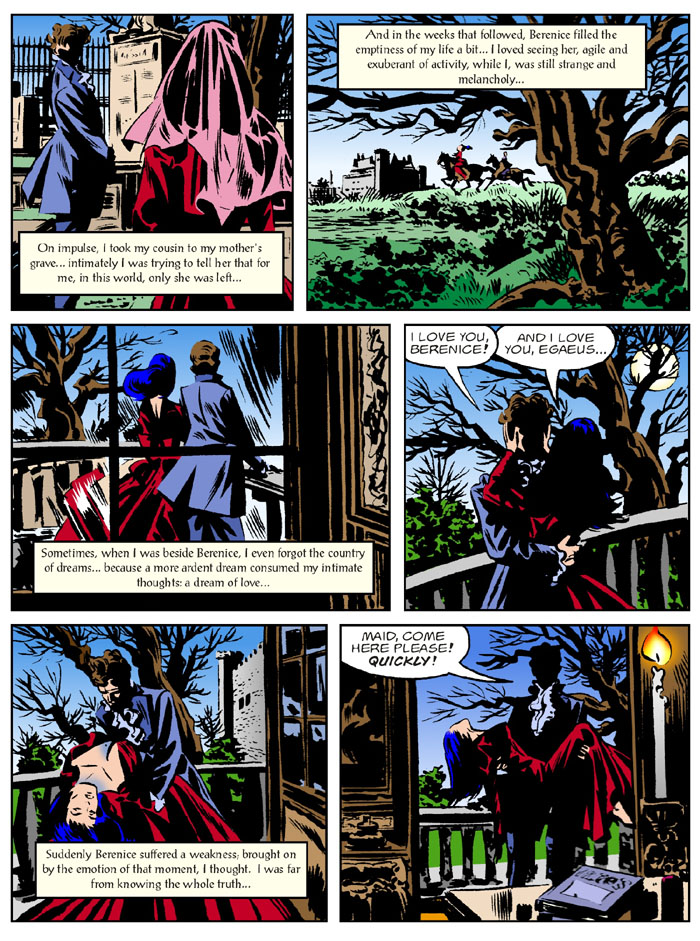 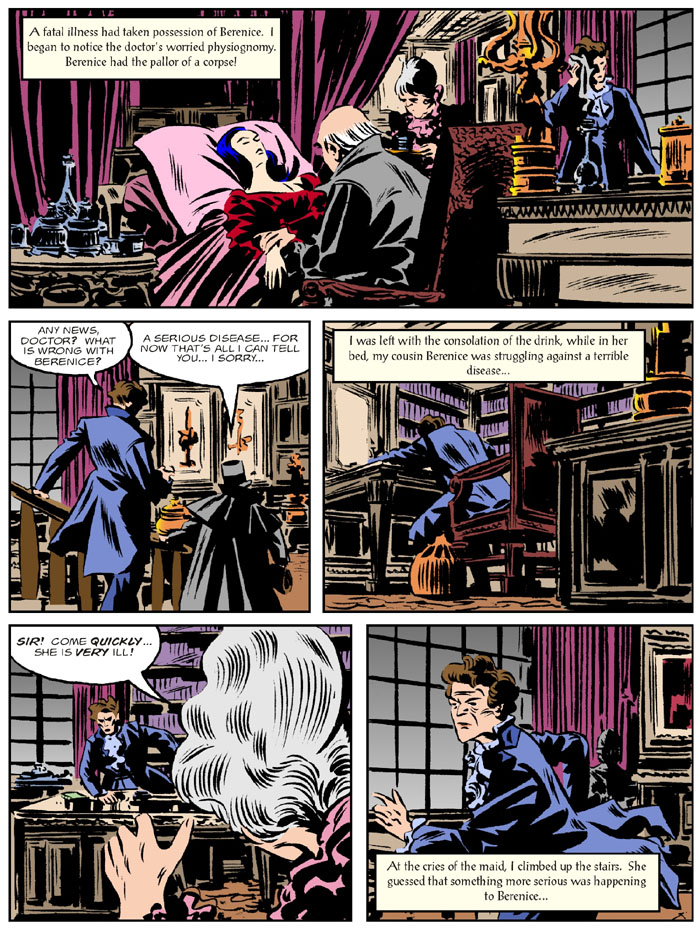 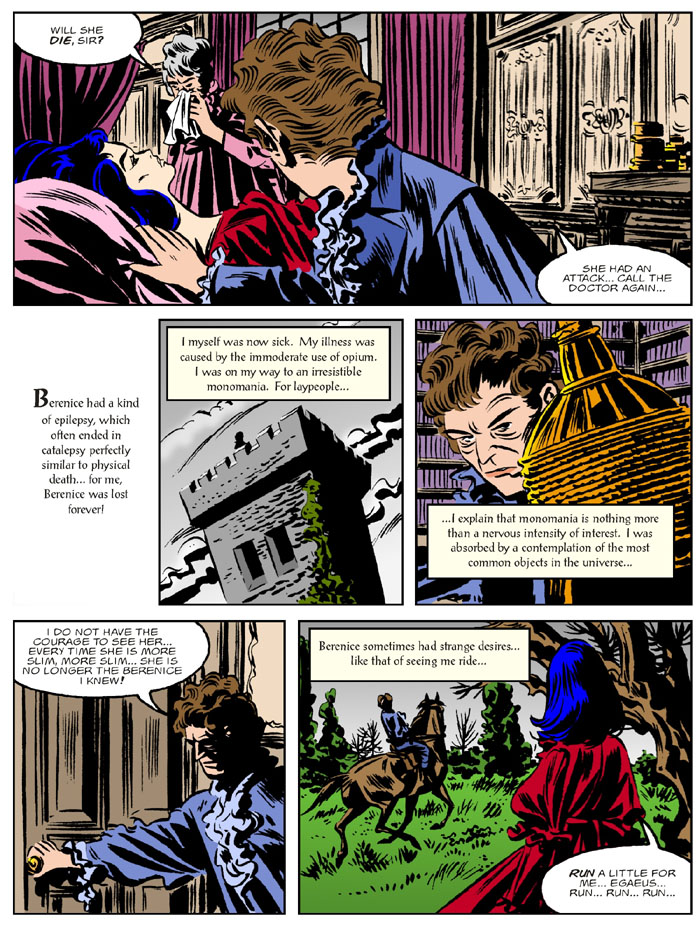 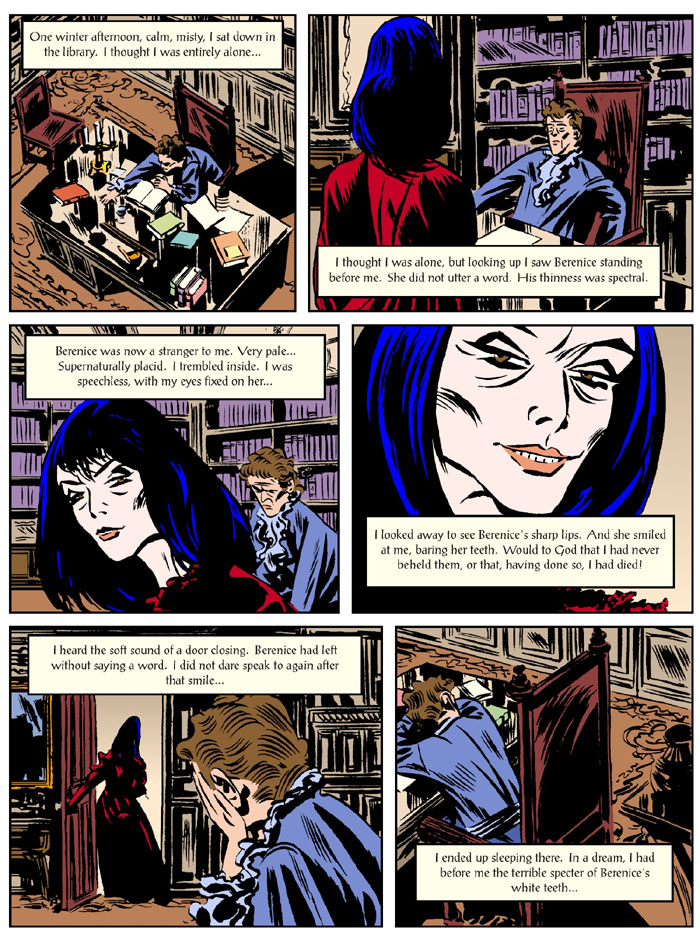 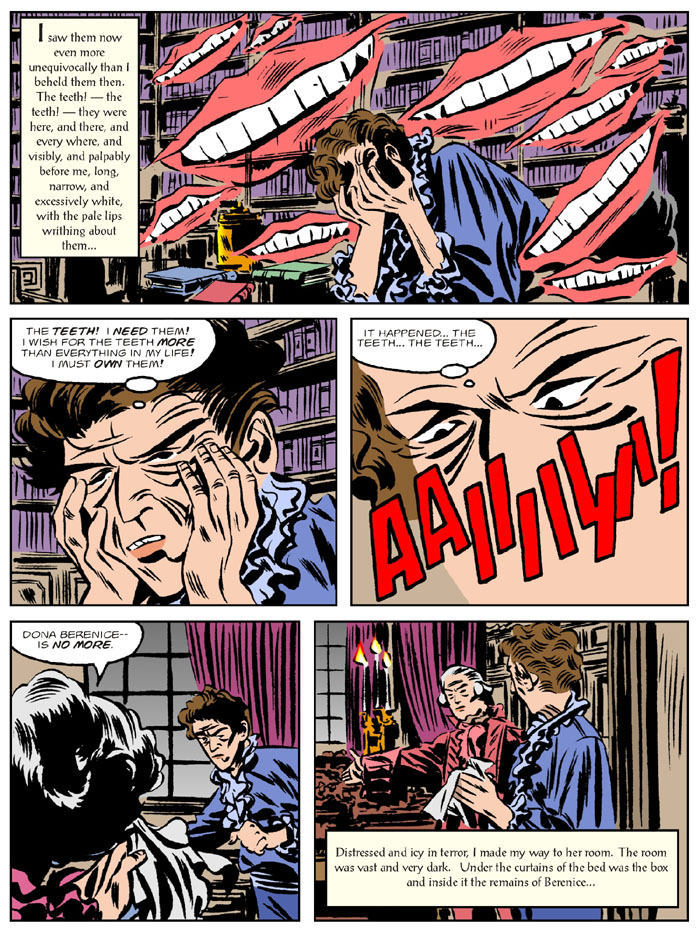 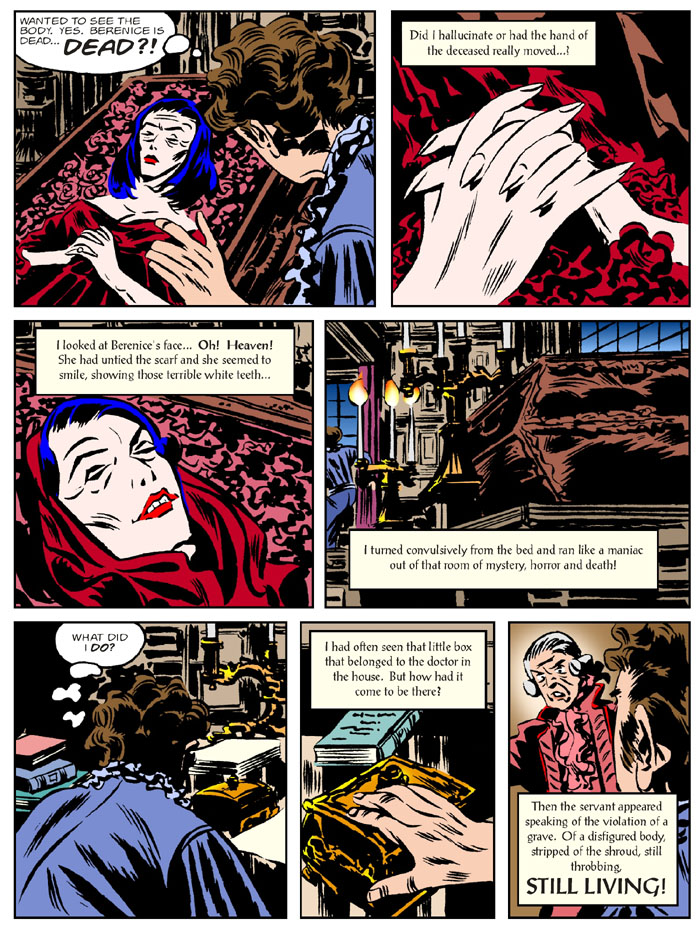 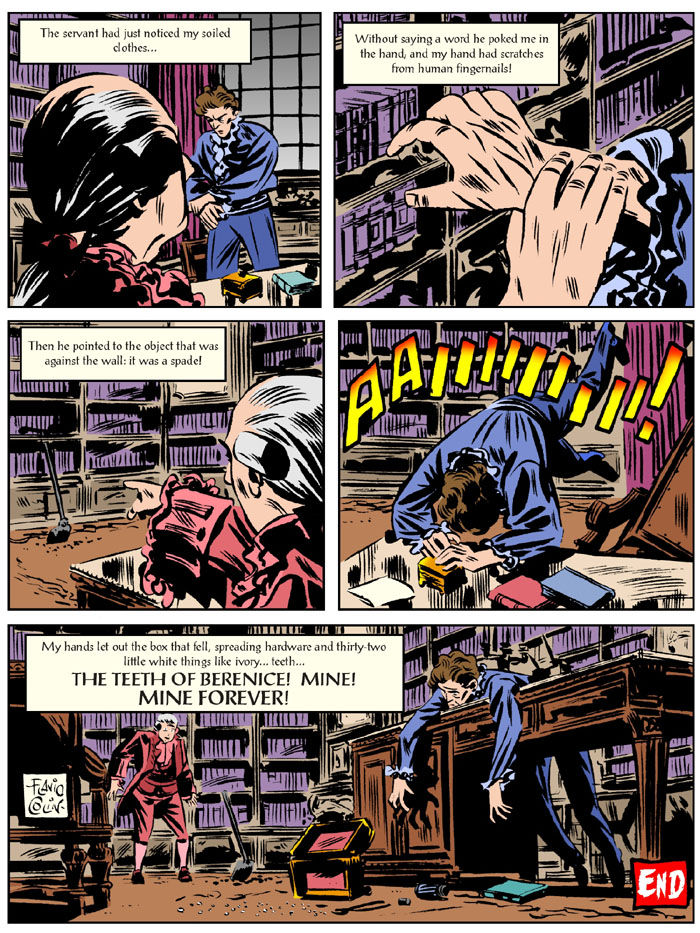 Many film adaptations tend to play "mix-and-match", taking elements from more than one story.  The Poe films have done this frequently, especially those from Roger Corman.  For example, it wasn't until I read Flavio Colin's version of "Berenice" that I suddenly realized that the scene in Corman's "HOUSE OF USHER" where Roderick sees Madelaine move while lying in the coffin-- but doesn't say anything-- a scene not in that story, actually came from the earlier story "Berenice". 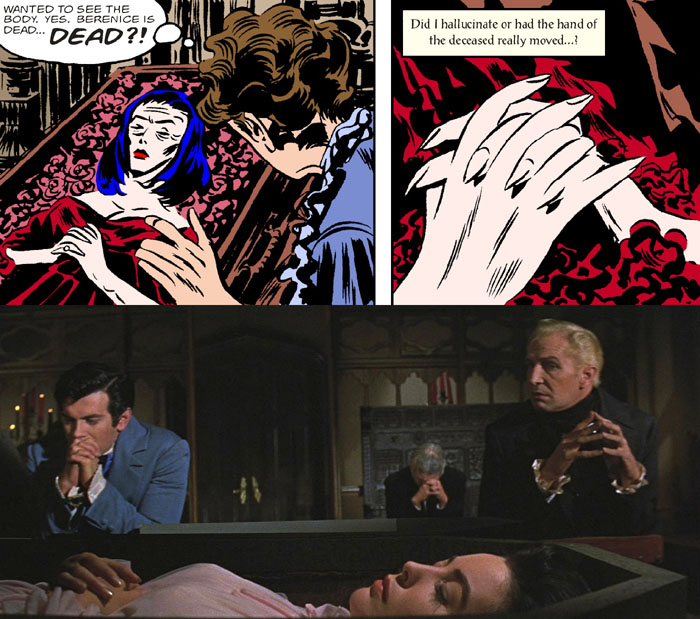 Meanwhile, I had seen Corman's "THE TOMB OF LIGEIA" more than a dozen times before I suddenly realized one of the key scenes-- where Verden realizes that HE cut the date of his wife's death from her gravestone without knowing it-- ALSO came from "Berenice"!  Again, it was reading Colin's version that opened my eyes to this. 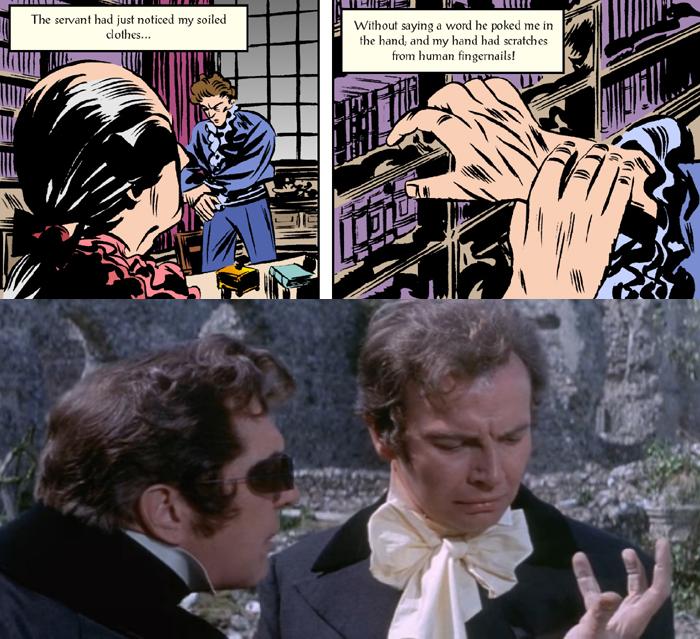 However, on finally picking up on this, I noticed something EXTRAORDINARY.  There were SEVERAL things in Colin's "Berenice" that were NOT from the original short story, unique to his adaptation-- that ALL turned up VERBATIM in Corman's "LIGEIA"!!

The 1st panel in Colin's story shows a manor house with a square tower, right next to a cemetery. 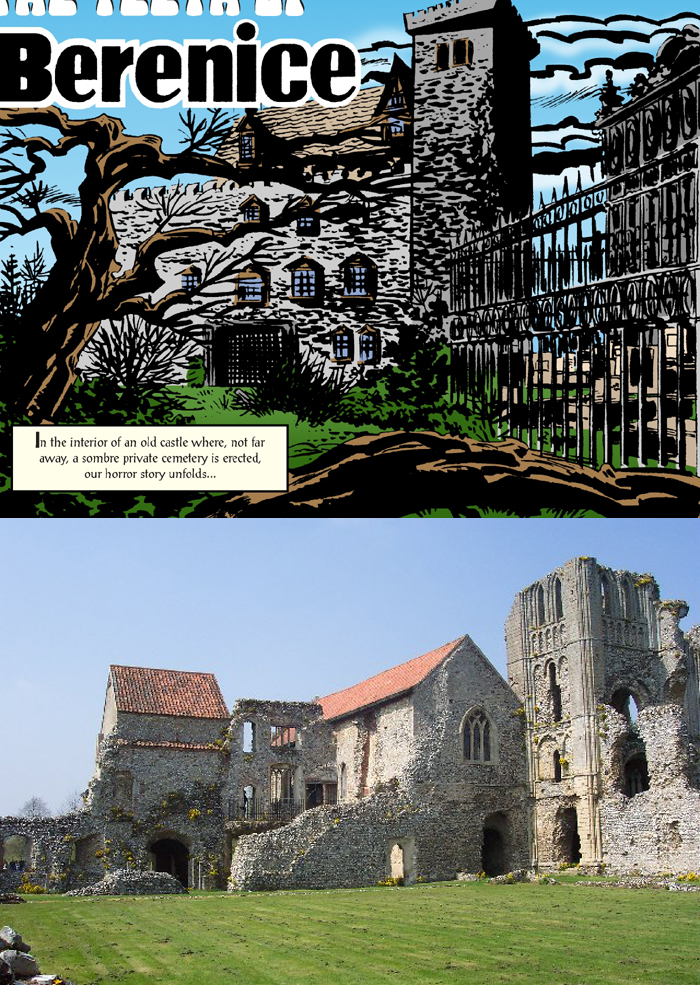 A shot of Egaeus and Berenice on horseback becomes a near-identical shot of Rowena & Christopher in a foxhunt! 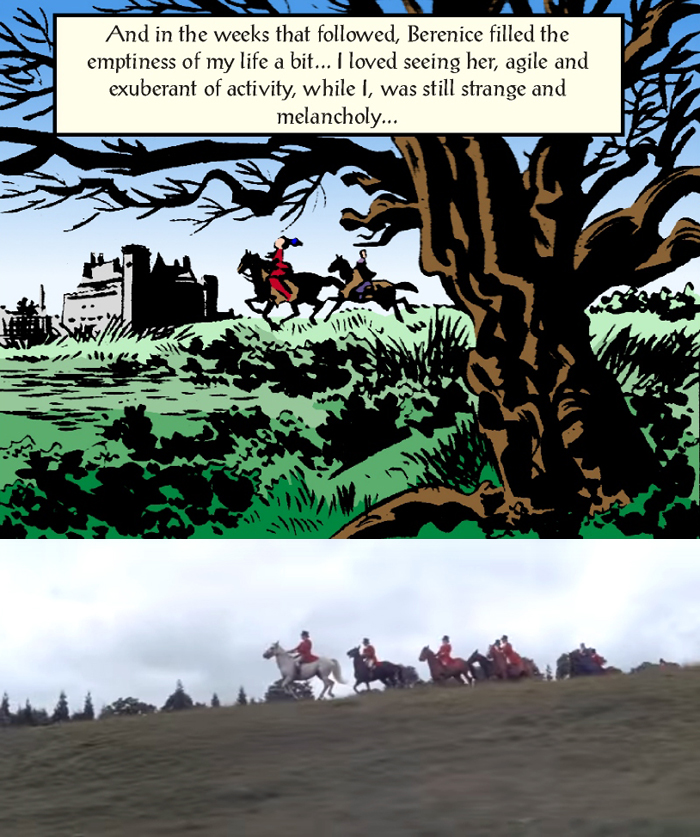 Egaeus spends a lot of time on top of his tower... and it turns out, the abbey's tower is where Verden has been unknowingly spending his nights.

Finally, a classic shot of someone carrying a woman... but it is notable that this does not appear in Poe's short story, and this is the ONLY Corman Poe film such a shot does appear in!

Considering Colin's "Berenice" was done 2 years BEFORE Corman's "THE TOMB OF LIEGEIA", doesn't it seem quite possible someone working on the film in England had seen this then-2-year-old comic from Brazil?  If NOT... the above is a HELL of a coincidence.


Strangely, the story was drastically re-formatted when it was reprinted in 1977.  I can't help but note this cover painting, in part, pays tribute to the movie poster for the 1972 Amicus film, "TALES FROM THE CRYPT". 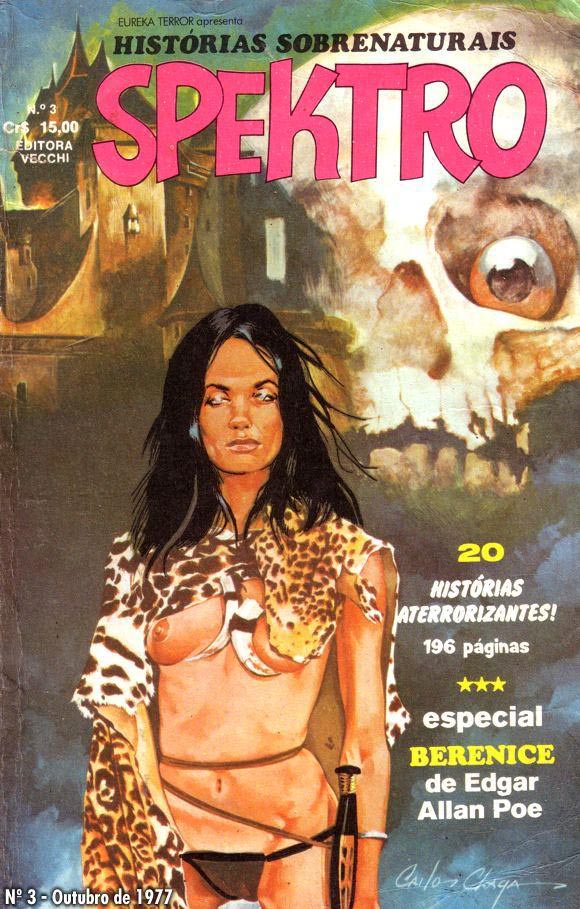 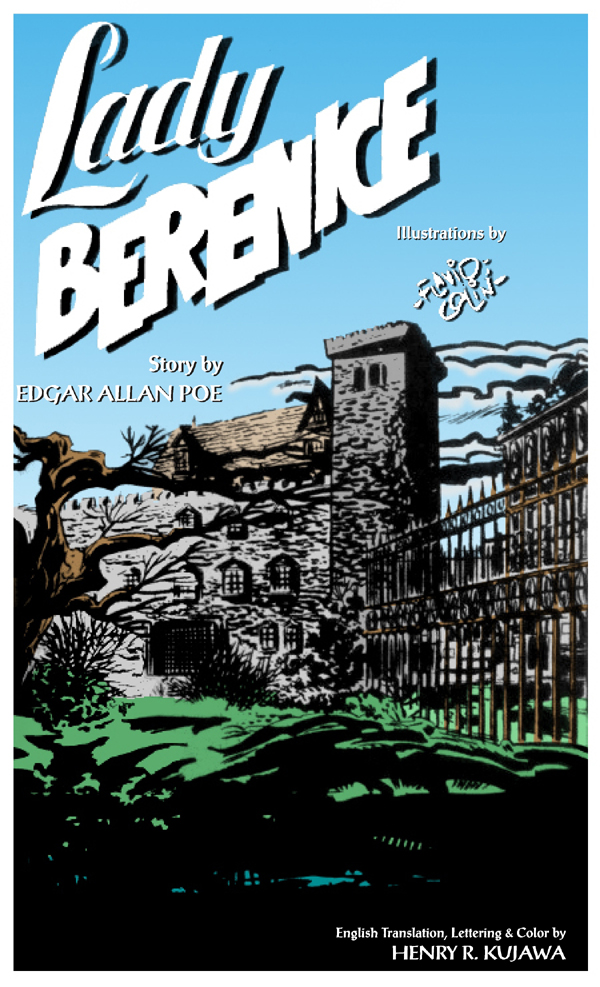 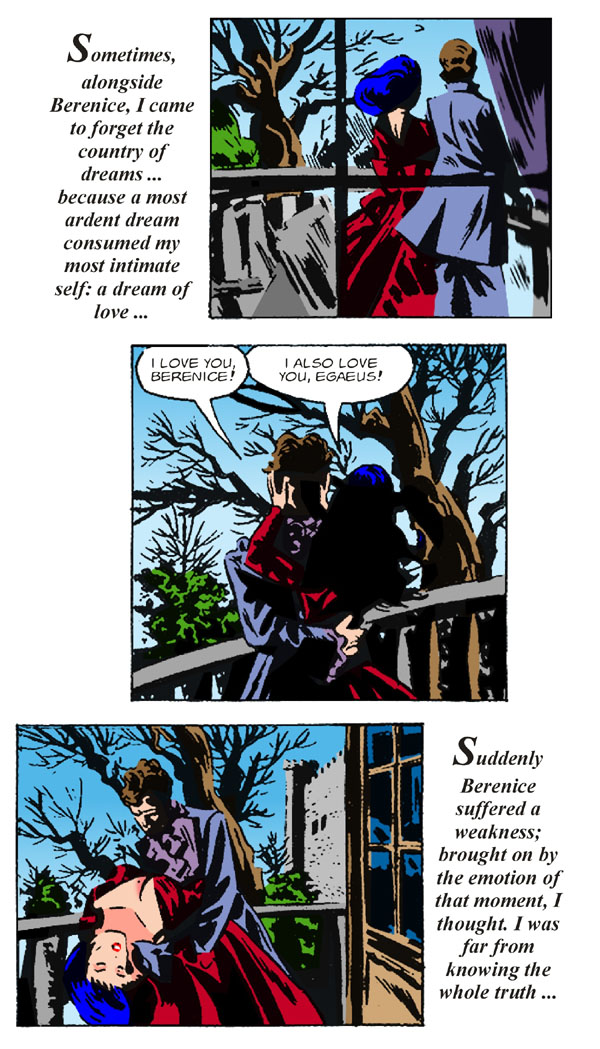 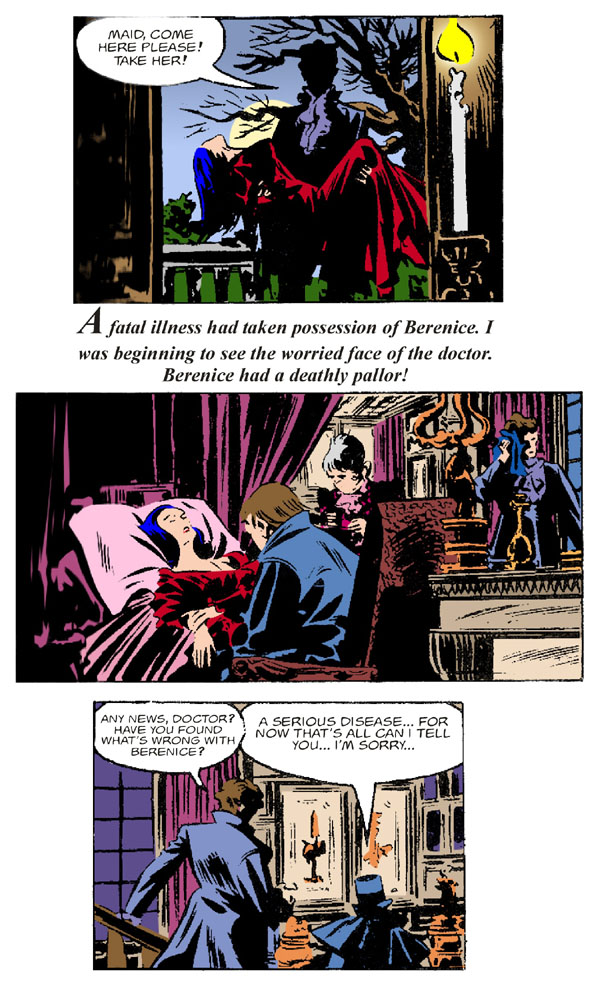 Back cover by RAFAEL LOPEZ ESPI 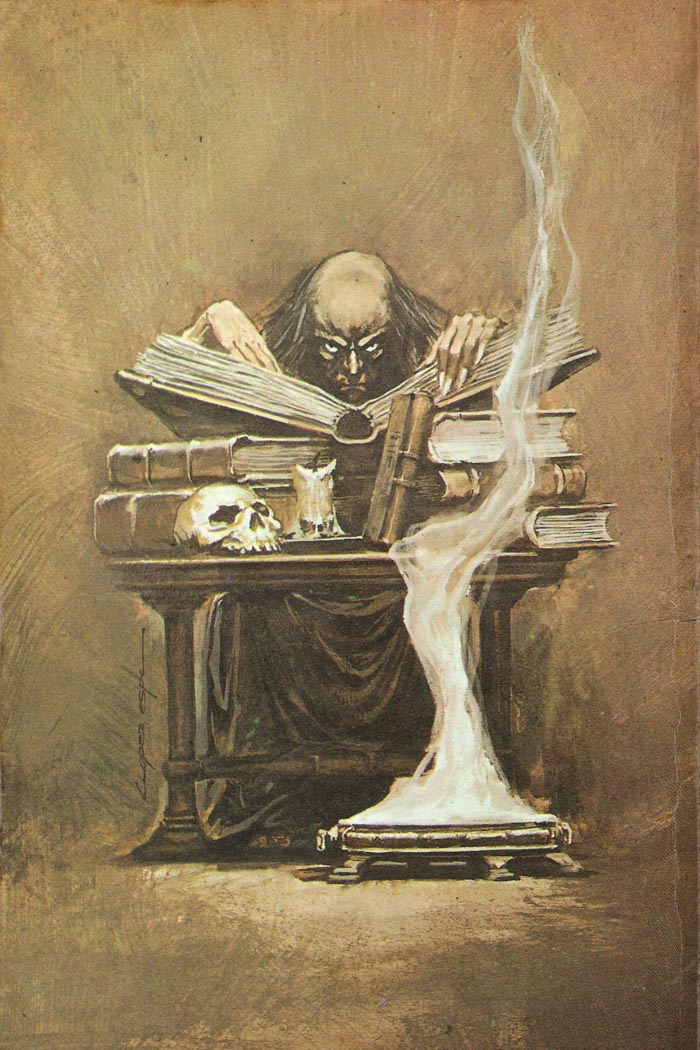 As a bonus, here's some examples of Flavio Colin's later work... 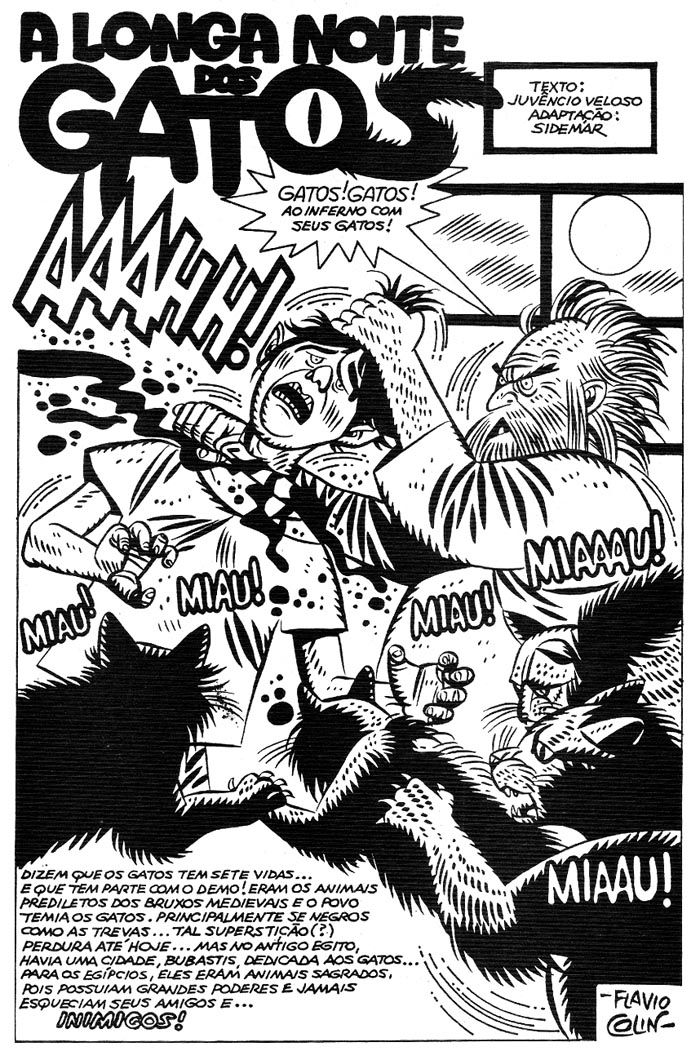 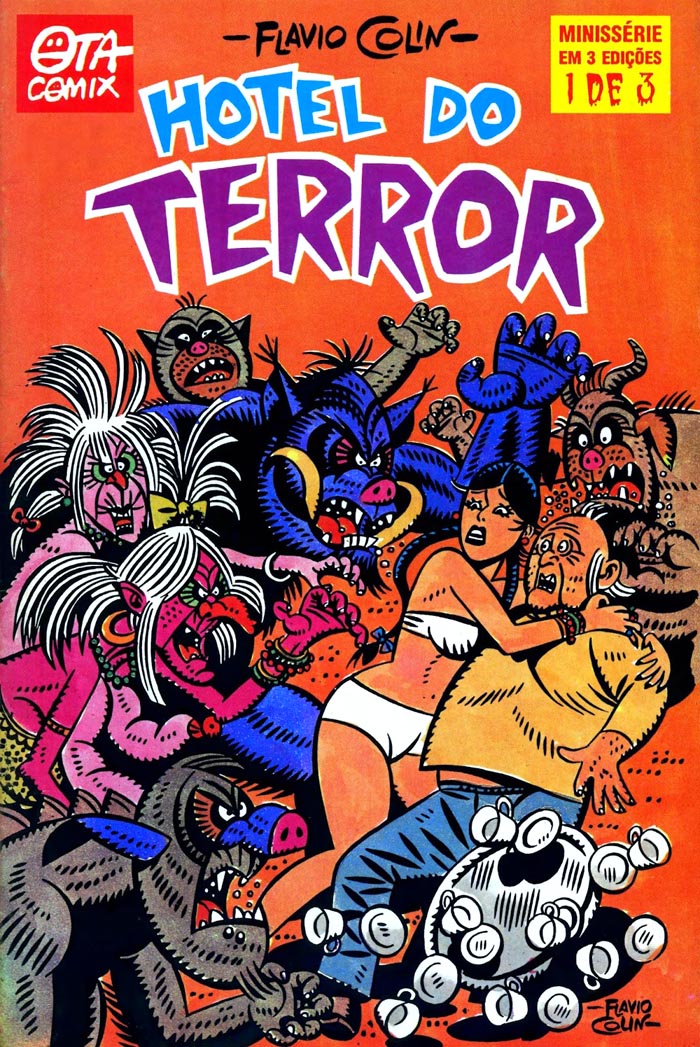 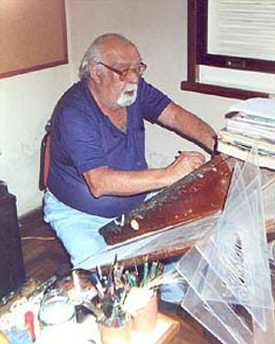 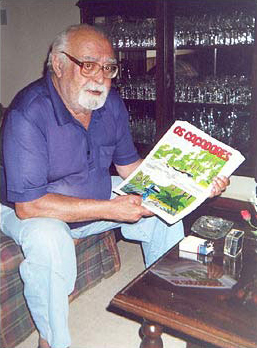 Scans of CLASSICOS DE TERROR #24
supplied by Marcelo Ferreira Antunes
with special thanks!

Read about Berenice at the Old Style Tales site.
Read the complete story at the Poe Stories site.
See the BERENICE Gallery of Illustrations.