2nd in line, another version of that popular favorite...

"THE MASQUE OF THE RED DEATH".

This is the 3rd comics version of this story, following...
Marvel's ADVENTURES INTO WEIRD WORLDS #4 (Spring'52), and
Charlton's THE THING #2 (Apr'52),
...the latter some 8 years earlier.  There would be MANY more to come!

I ran across this during my search, listed on the cover of SPEKTRO #6 (Editora Vecchi / Jul'78). Many issues of that series have been posted online in their entirety, but not this one.  Via a blog (found during another online search),
I discovered the artist was Manoel Ferreira.  I don't know much about him, as he has proven strangely difficult to find any information on.  From the GDQ site,
I learned he was very active between 1950-1960, and was a "civil servant" who did comics on the side!  Anyway, as I suspected (following my investigations into Luiz Saidenberg's "O Gato Preto"), the SPEKTRO appearance was a reprint!  The story had actually debuted in the early 1960s, in an issue of CLASSICOS DE TERROR.

I didn't know which one until Toni Rodrigues e-mailed me HI-RES scans! I had already processed, translated & colored the 2 pages from SPEKTRO #6 I found on that blog, but now I have the whole thing.  I also discovered that SPEKTRO was apparently in the habit of re-formatting the panels to fit smaller pages, and ONE of the panels I colored was NOT actually from the original comic!  I'll be including those as a bonus.

The original POE story is a mere 3 pages, so most of the comics adaptations tend to be on the short side as well.  At 5 pages, this ties with at least 2 others (so far) among the shortest.

I really like Ferreira's style here.  It reminds me a lot of Tom Sutton's work... who also did this story, but around 6 YEARS later!  As it happens, the Sutton version was the 1st story in this project I was inspired to add COLOR to.
For this version, I decided to use the exact SAME color scheme!

This would be Ferreira's only POE adaptation. 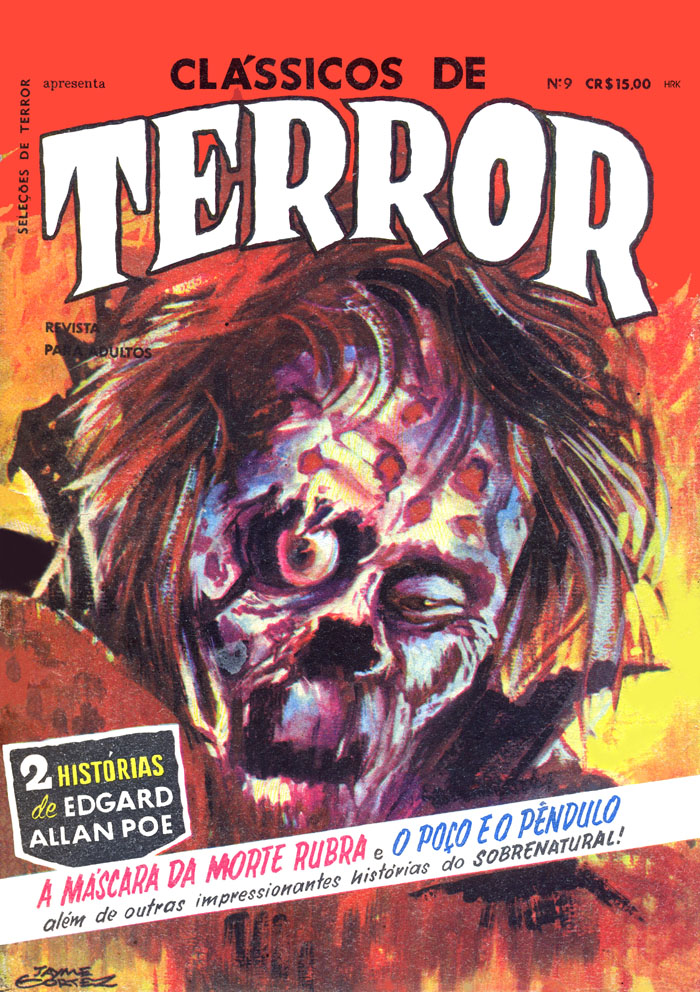 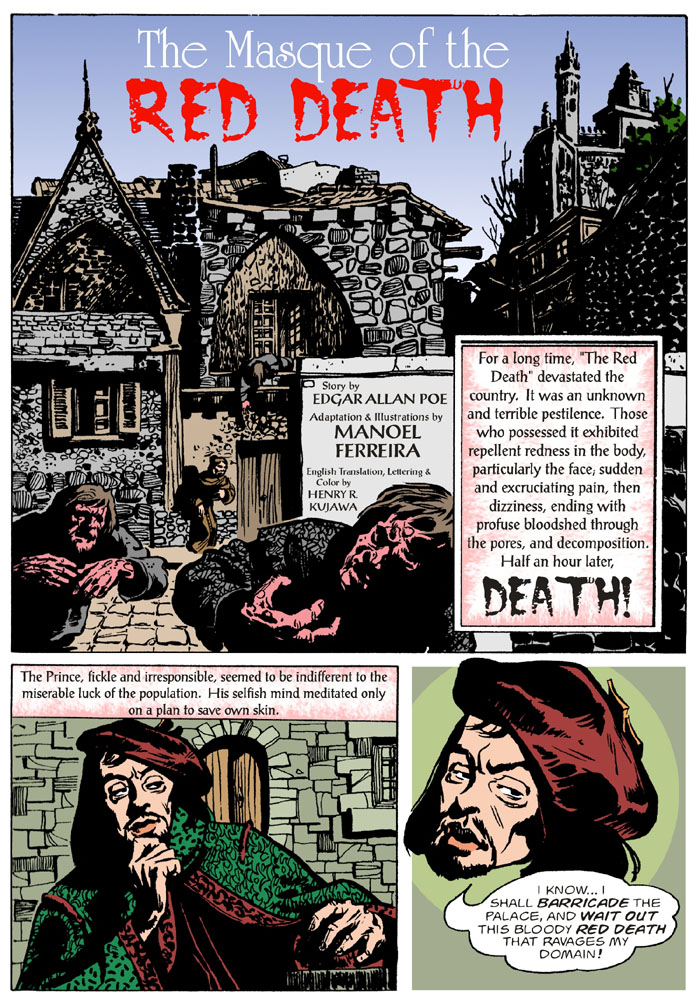 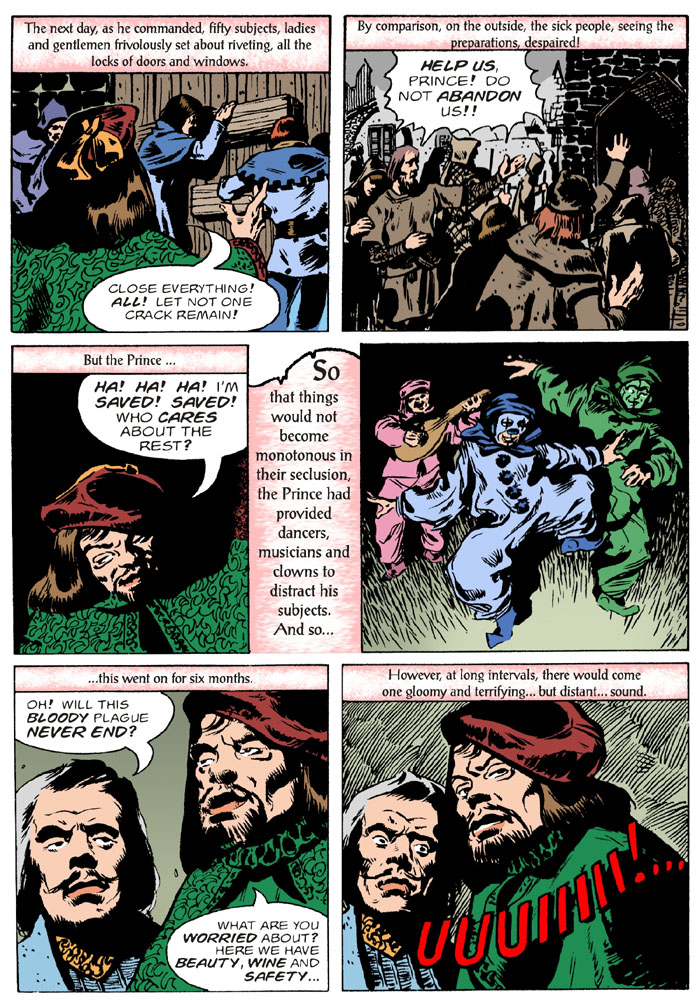 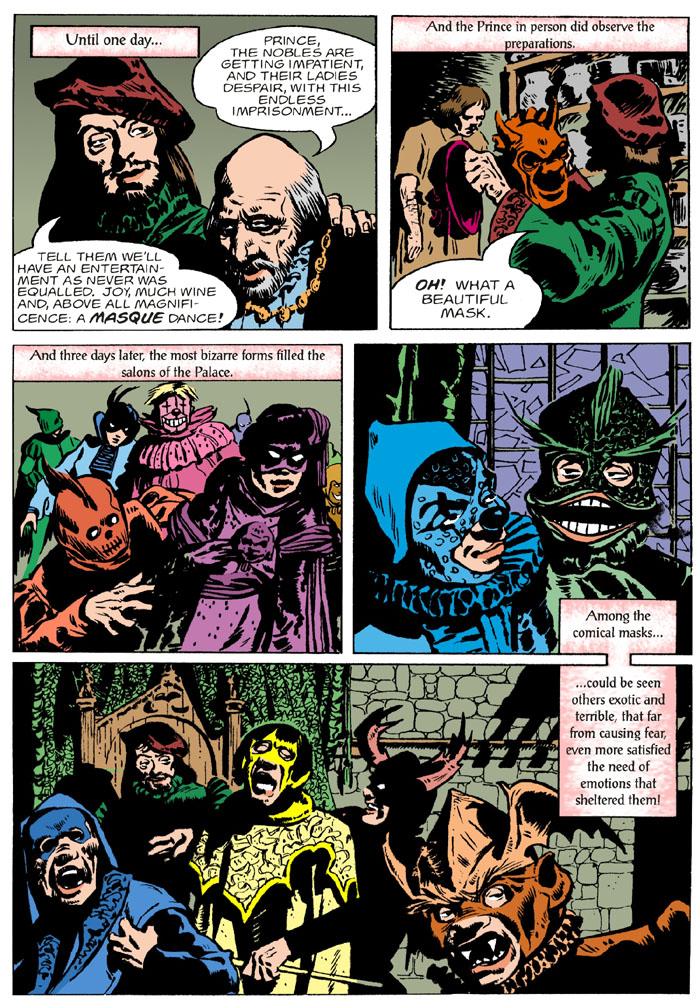 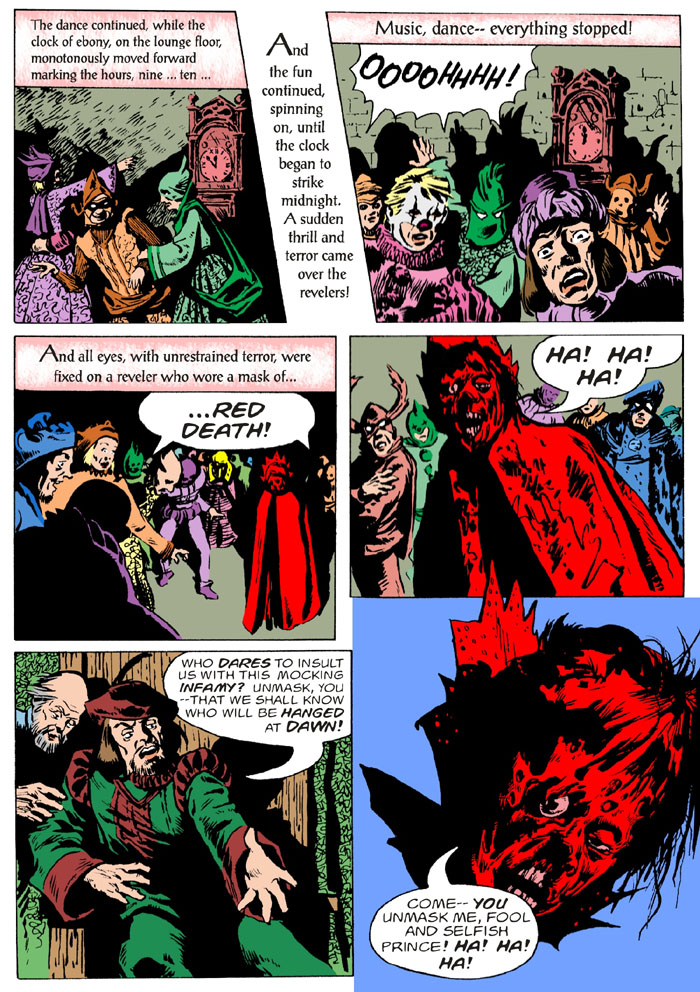 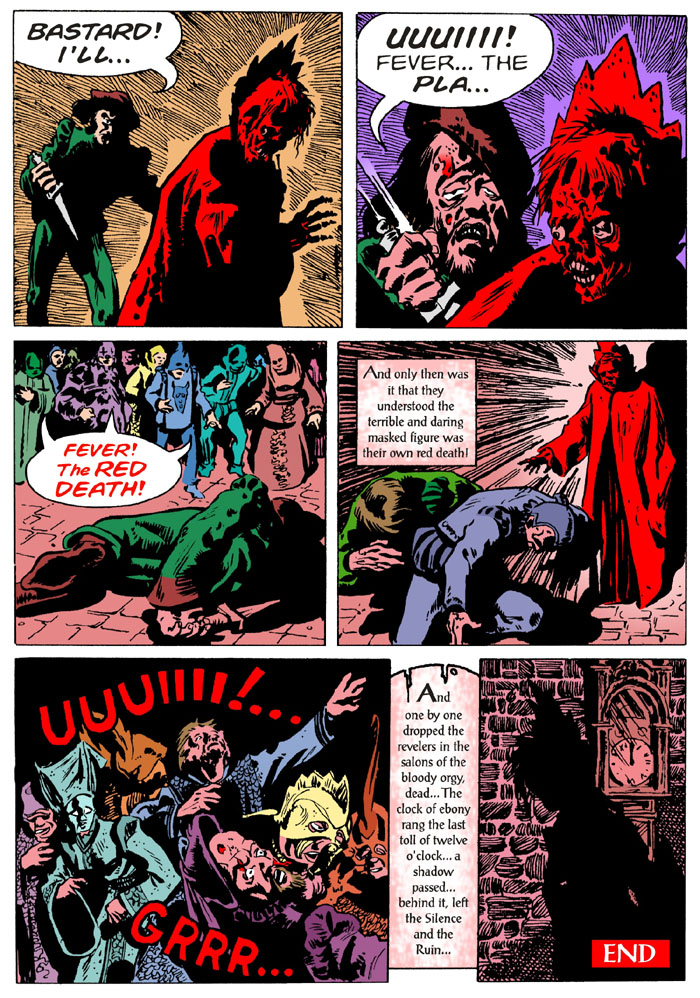 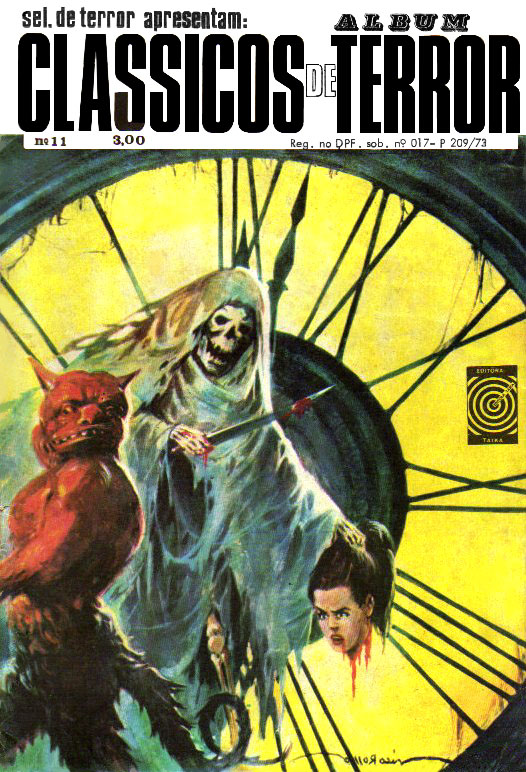 Now this is maddening.  Jayme Cortez' stunning cover is reprinted here with the colors totally distorted.  But that's not the worst of it.  Although this book contains 100 pages and 14 reprinted stories, NONE of them are by Poe, despite what it says right there on the cover.  This really shows how chaotic Taika had become by this point. 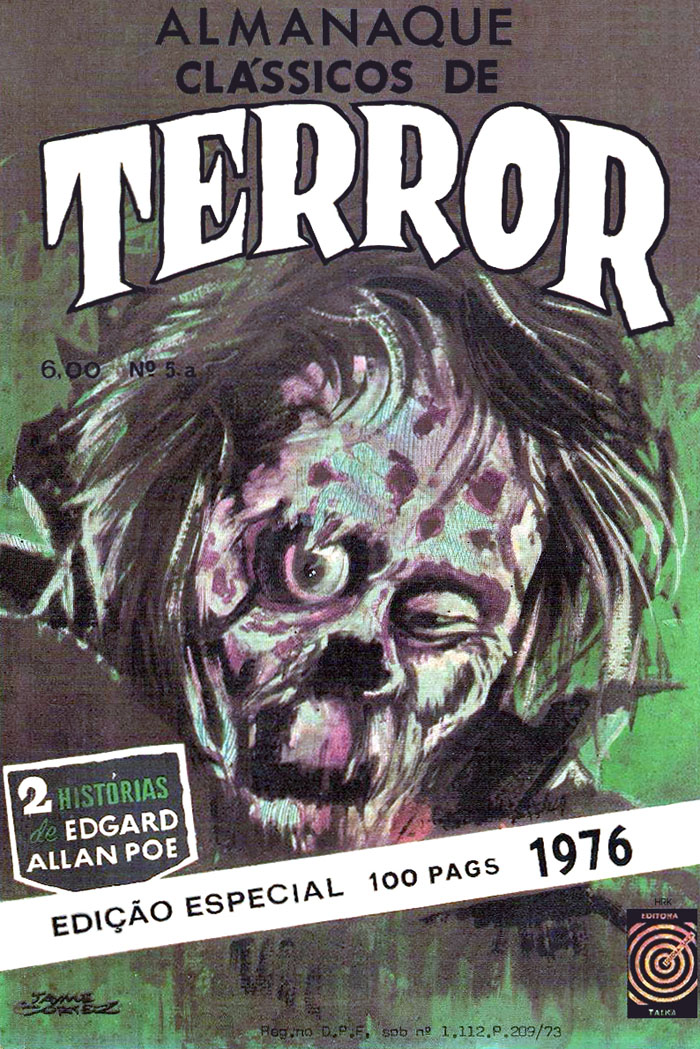 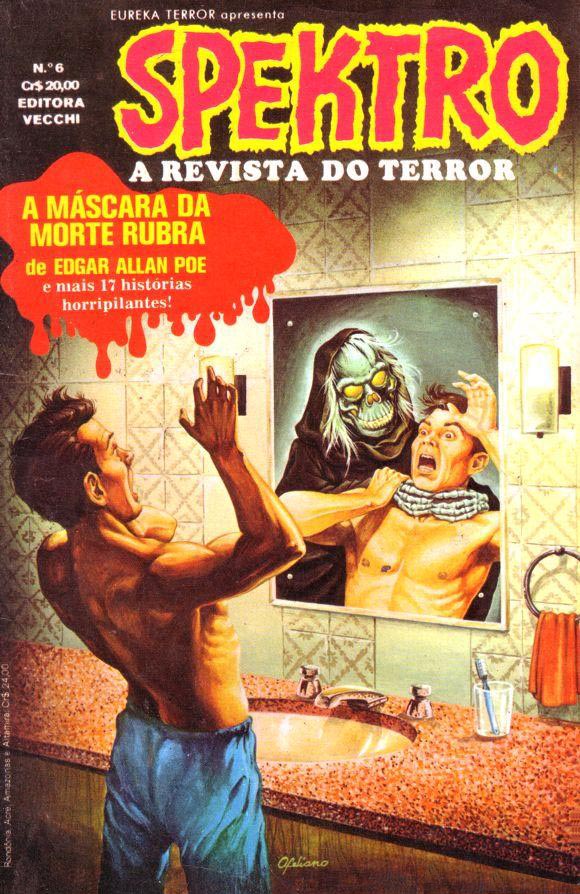 Here's the reformatted pages I found...

Page 12  /  The level of visual detail lost in the reprint is almost shocking, though nothing I haven't seen before with this sort of thing.  In addition, oddly enough, the text has been altered extensively, and I see a figure has been added to the 1st panel, presumably by someone other than Ferreira. 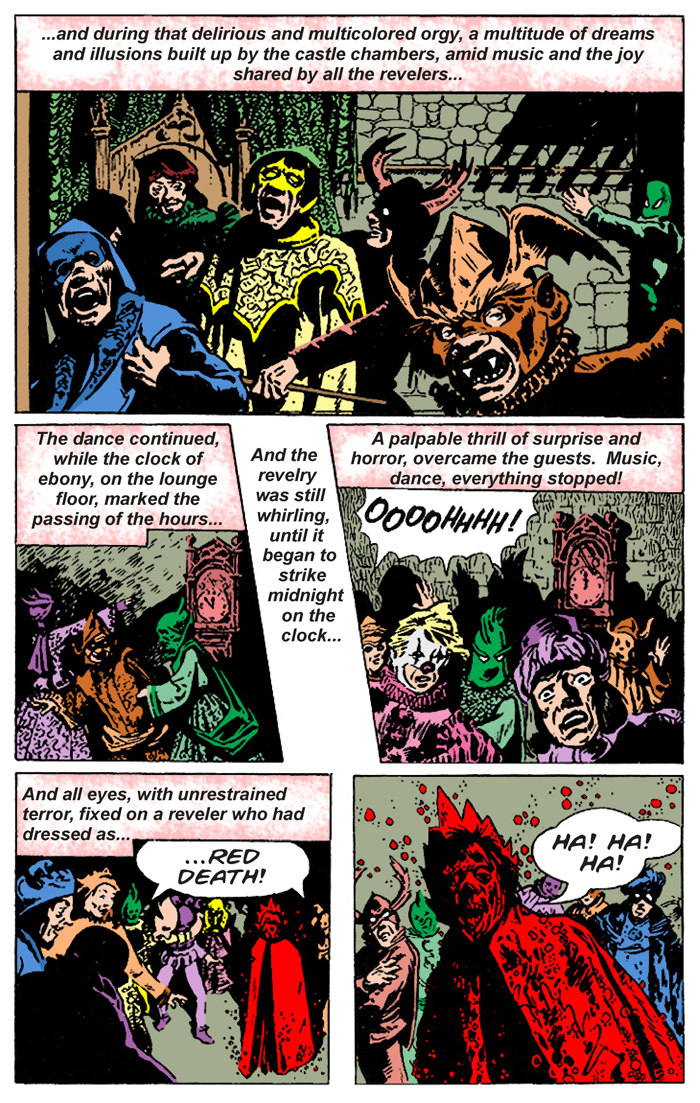 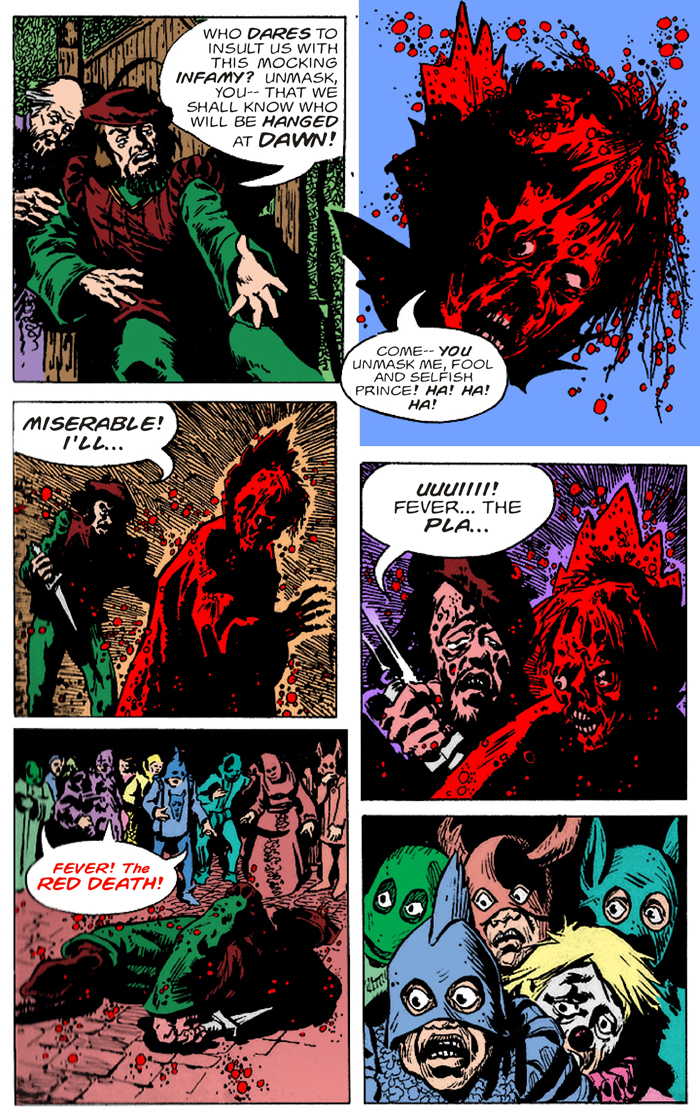 Back cover by ROBERTO SIMOES 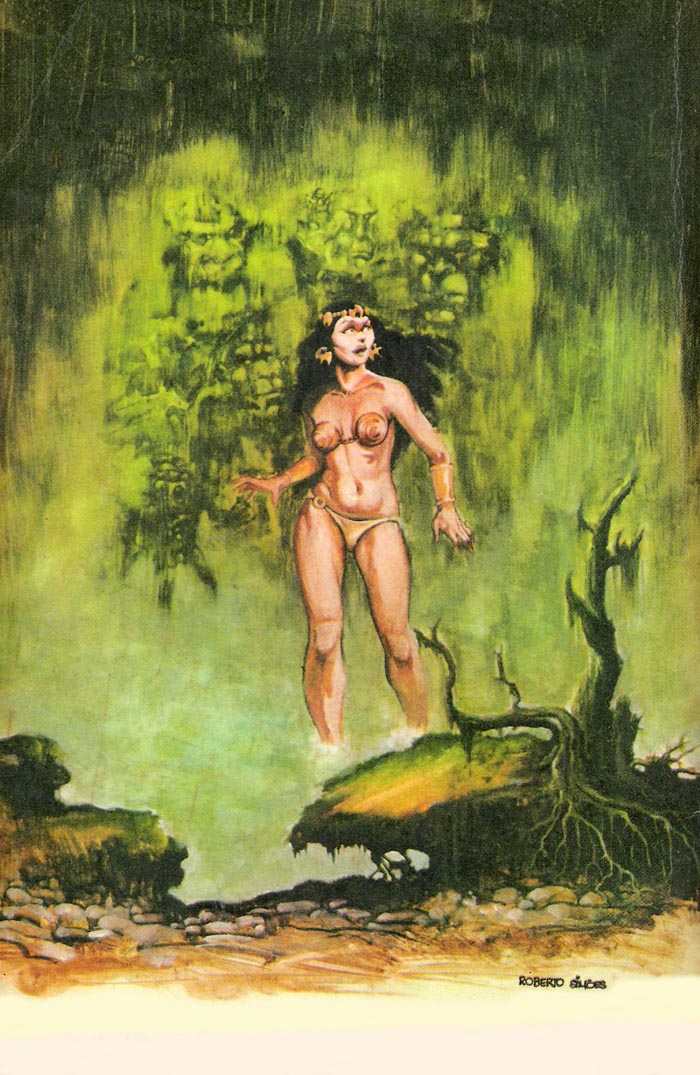 As a bonus, here's another piece of Manoel Ferreira art I found online... 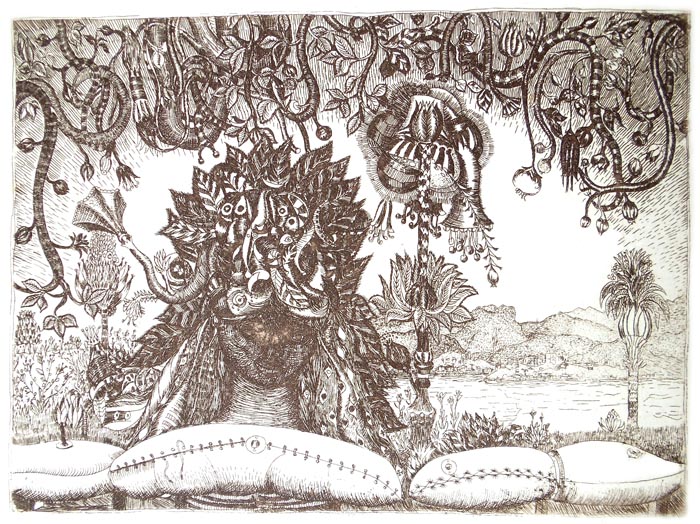 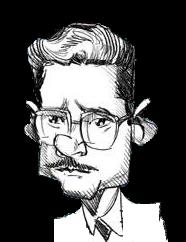 Scans of CLASSICOS DE TERROR #9 supplied by Toni Rodrigues
with special thanks!

Read about THE MASQUE OF THE RED DEATH at Wikipedia.
Read the complete story at the xroads.virginia.edu site.