The 70's was a rough time for Bill Everett's SUB-MARINER.  Having debuted in 1939, at one point he appeared in 5 books regularly at the same time! Though his series ended in 1952, he returned in 1962, and after 14 appearances, was finally awarded his own series again, in TALES TO ASTONISH. In early 1968, he got his own title again, which ran for 72 issues. Golden Age fanboy Roy Thomas had guided most of the early issues, giving the book almost a KULL THE CONQUEROR under the water feel.

But a streak of pointless misery crept in. Betty Dean showed up, old and sad about it; Lady Dorma got killed on her wedding day; Namor gave up the throne; he found his father, only to see HIM get killed; and then Namor got another bout of amnesia (the bane of bad storytelling cleches). Roy's pal Gerry Conway carried on when Roy got to busy to do it himself, and his writing style was even more depressing than the stories he was telling.

Things got much better when Bill Everett was finally "allowed" to take over his creation again, but the joy and wonder he brought to it was short-lived, due his his failing health. When Everett passed away, the book fell into creative chaos, with Steve Gerber admitting he had no idea he was doing, and inappropriate artists like Don Heck, George Tuska and John Romita (the latter on covers) all serving to drag the book down. Roy stepped in and tried to salvage things with a drastic change-of-direction (always a bad sign), in which Atlantis was put in a coma by toxic waste and Namor was forced to wear a special suit (often compared to biker gear) in order to breath out of water. Nothing worked, and falling sales saw the book cancelled (albeit years after NICK FURY, DR. STRANGE, CAPTAIN MARVEL and X-MEN).

Even as the last issue went to press, Roy announced "big things!!!" were in the works for Sub-Mariner. Hmm.

1974 saw the debut of Marvel's short-lived quarterly GIANT-SIZE comics. These were a mixed batch, as they tended to have a longer-than-usual new lead story coupled with reprints. (I hate it whenever someone combines new and old material in one package.) One of these had the awkward title of SUPER-VILLAIN TEAM-UP.  While MARVEL TEAM-UP had Spider-Man meeting a different hero each issue, and MARVEL TWO-IN-ONE had The Thing do the same, SVTU was planned as an ongoing story that would combine two cancelled series-- SUB-MARINER, and Dr. Doom's series in ASTONISHING TALES.

It seemed cursed from the start.  The brainchild of Roy Thomas (who else?), it was, just like GIANT-SIZE DEFENDERS #1, put on the schedule before anyone had time to actually do the first book.  As a result, #1 had 10 new pages, backed by reprints.  John Buscema & Joe Sinnott, who'd recently teamed on FANTASTIC FOUR, did nice work, but apart from a 2-page spread, the rest of the panels were too small and cramped to really show off either man's talent at their best. I'm gonna include some interior pages along with the covers this time. That should either inspire fans to seek out the issues-- or know enough to avoid them at all costs! (heh) 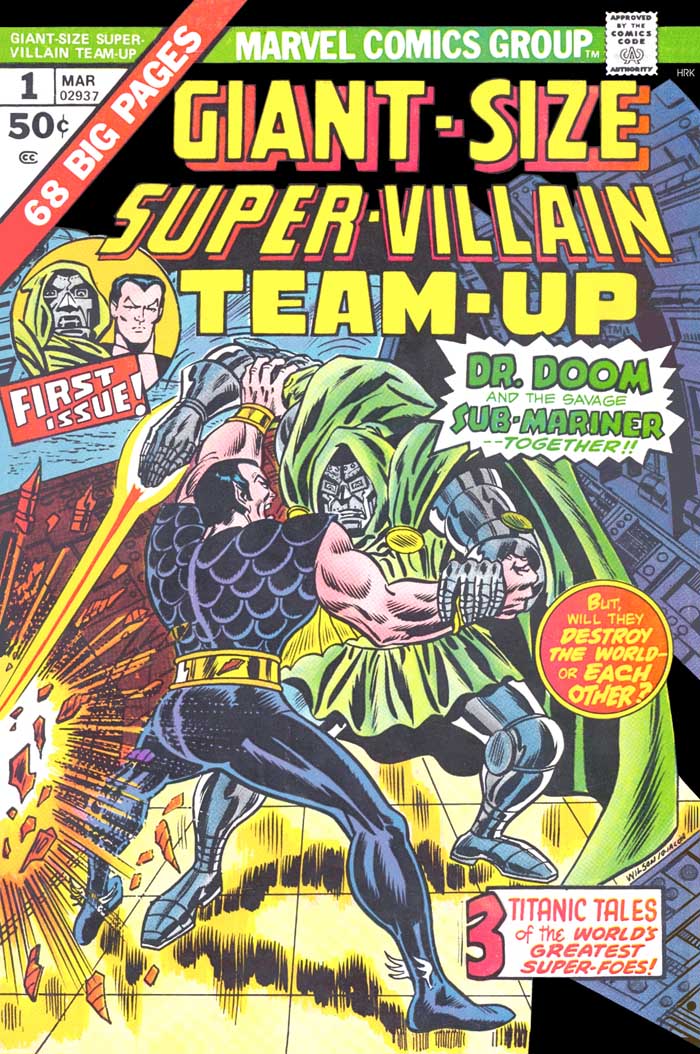 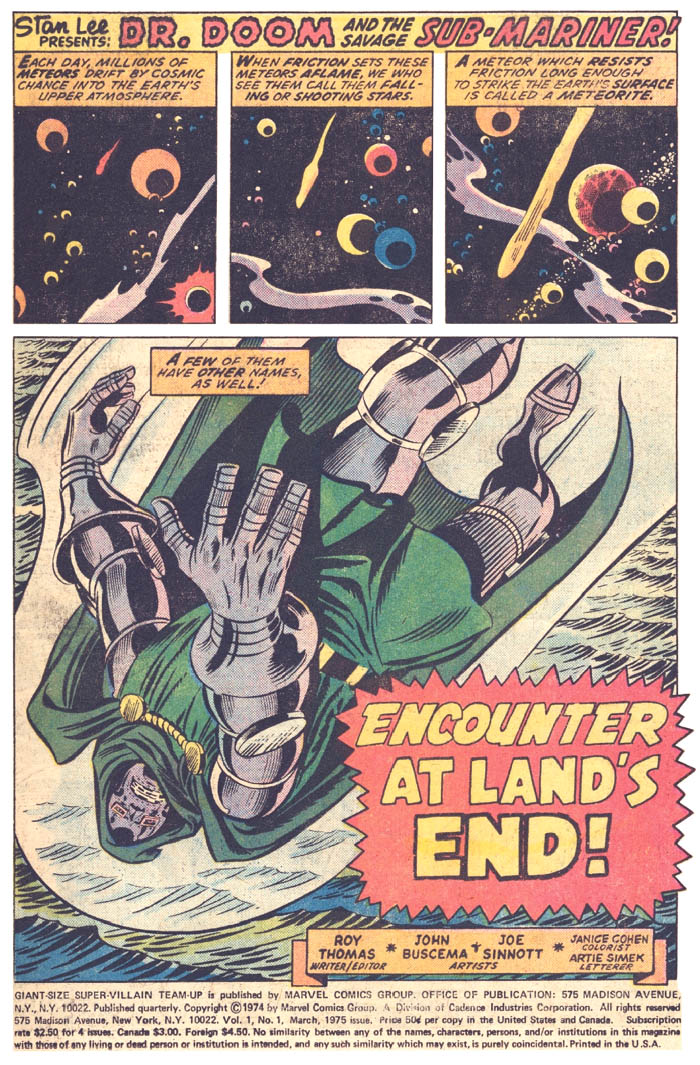 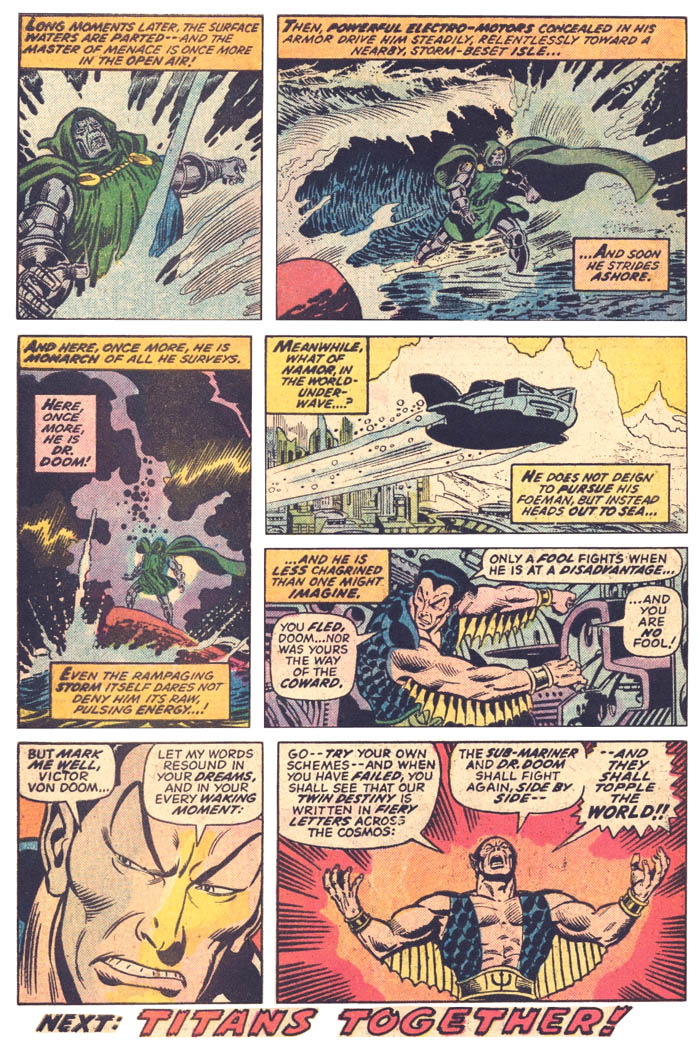 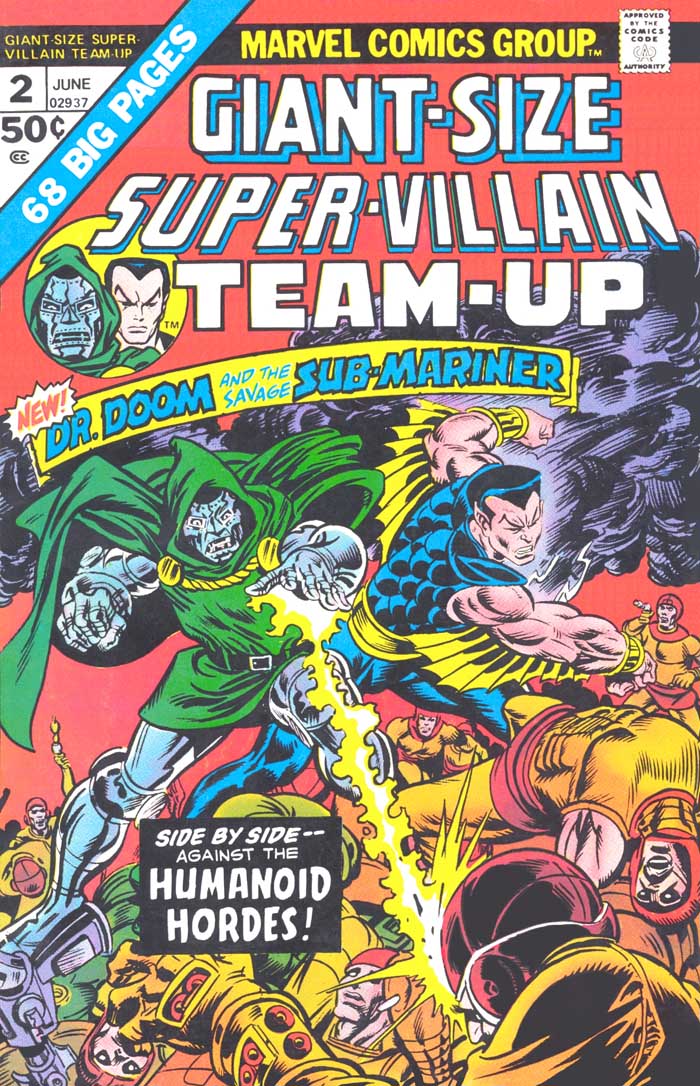 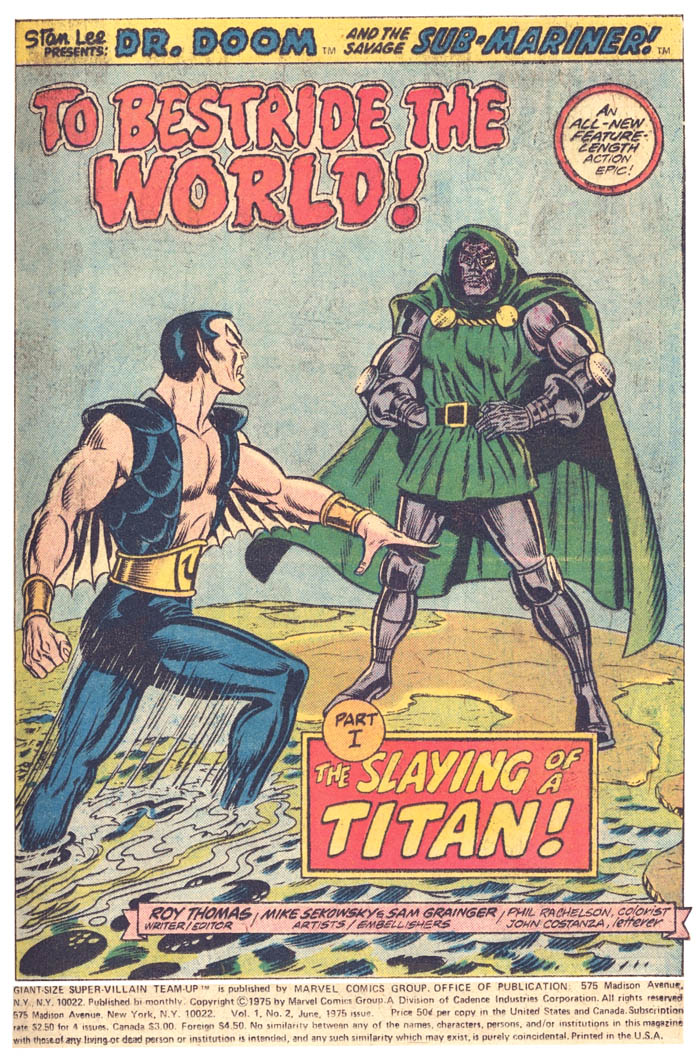 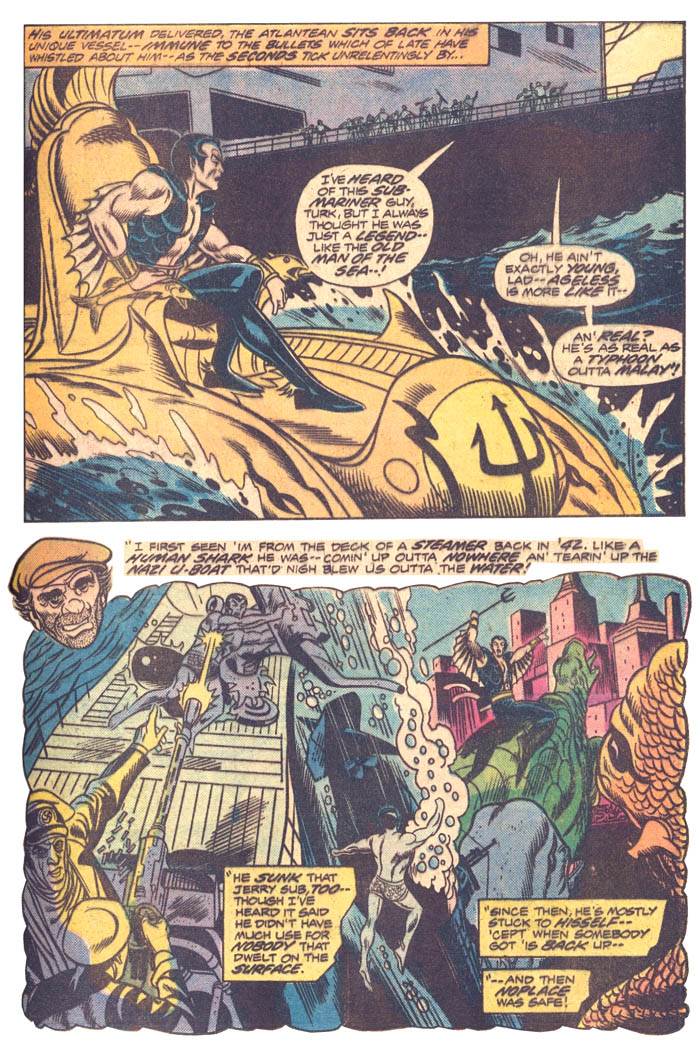 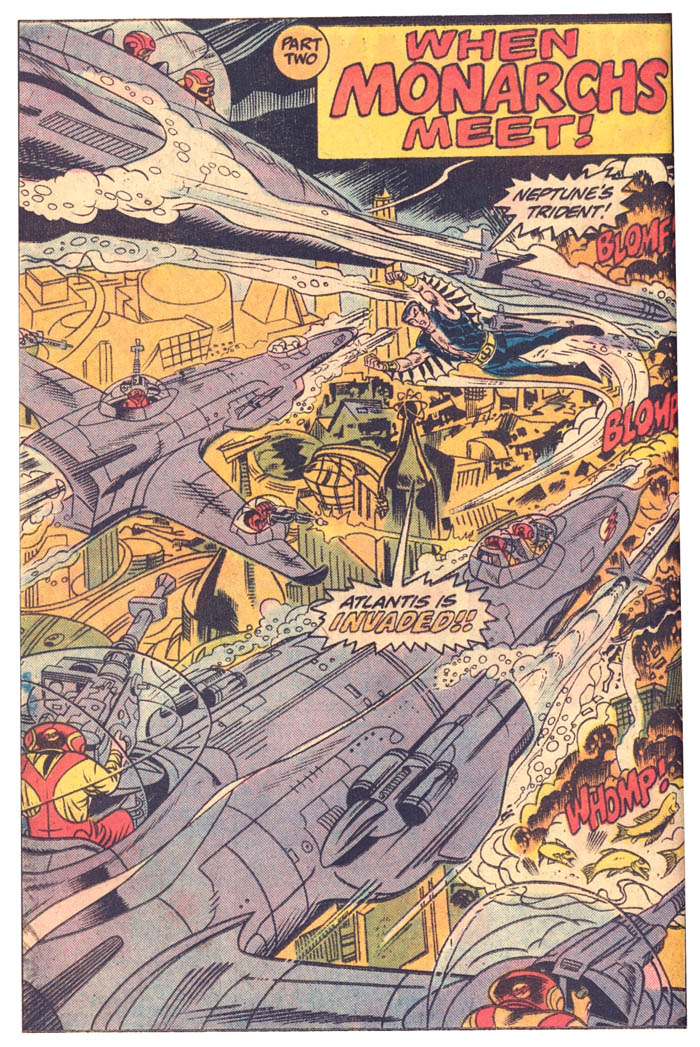 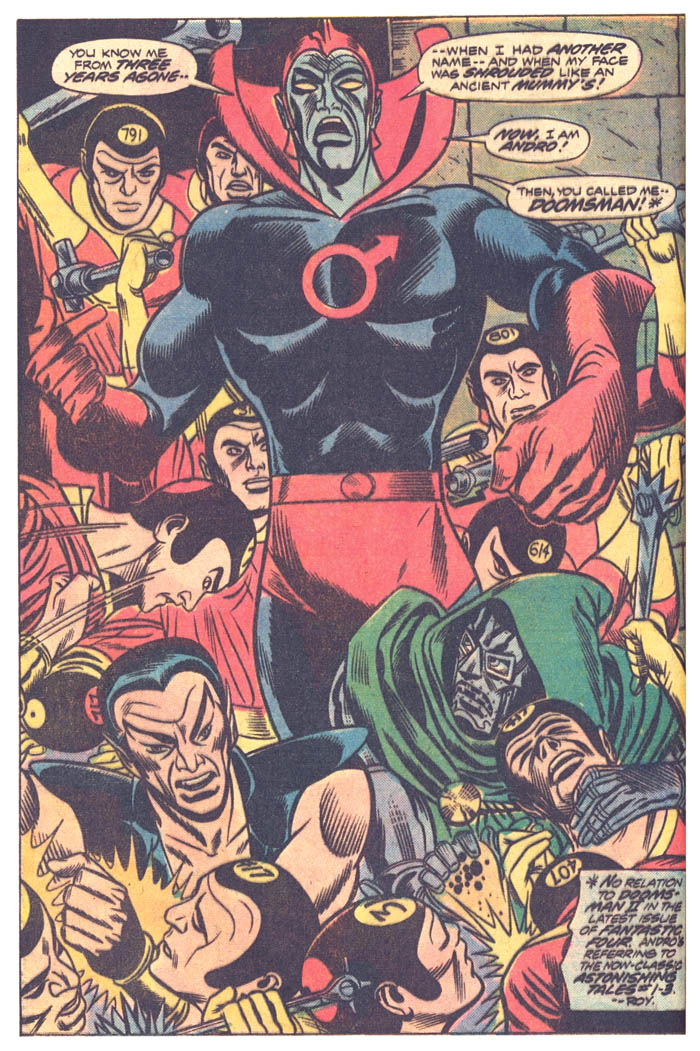