Marvel's GIANT-SIZE line was short-lived. AVENGERS, DEFENDERS and SPIDER-MAN (the latter should really have been called GIANT-SIZE MARVEL TEAM-UP) each had 5 issues apiece with new material.  X-MEN and INVADERS had 1 apiece.  SVTU had 2.  Absurdly, when the 3rd issue of SVTU appeared, it was a new #1.  The book also had a terrible turn-over on the creative side. Not only had John Buscema & Joe Sinnott, and Mike Sekowsky & Sam Grainger each only done 1 story apiece, Roy Thomas found himself once more too busy to do his beloved Subby.

Picking up the ball was Len Wein (editor) and Tony Isabella (writer), who managed to make both Namor and Dr. Doom more sympathetic characters than Roy had before him. The art on the new #1 was a hodge-podge of George Tuska (who'd done 3 issues of SUB-MARINER right near the end), Bill Everett (Subby's creator-- who had DIED a couple years earlier-- where DID his 3 "Dr. Doom" pages come from, anyway??), and, EVEN stranger (no, really!), George Evans (perhaps best known for his work on EC war books-- I think). Inks were provided by Fred Kida and Frank Springer. An ecclectic issue, to say the least.

Issues #1-3 comprised a 3-part story which brought back several long-running villains from Subby's previous book-- Attuma (first introduced in FANTASTIC FOUR #33, later adapted as one of the 1967 F.F. cartoons from Hanna-Barbera), Tiger Shark, and Dr. Dorcas (a "Dr. Zarkov" lookalike, only evil). The 2nd issue had art by Sal Buscema (who'd done quite a lot of issues of Subby's book in the late 60's) and Kida again on inks. Abruptly, the final chapter of the 3-parter saw Marv Wolfman take over as editor, Jim Shooter step in as writer (his FIRST work for Marvel, I believe), George Evans (again on pencils) and Jack Abel (on inks). With so many people coming and going, it's amazing this thing ever got past the first few issues before being cancelled. 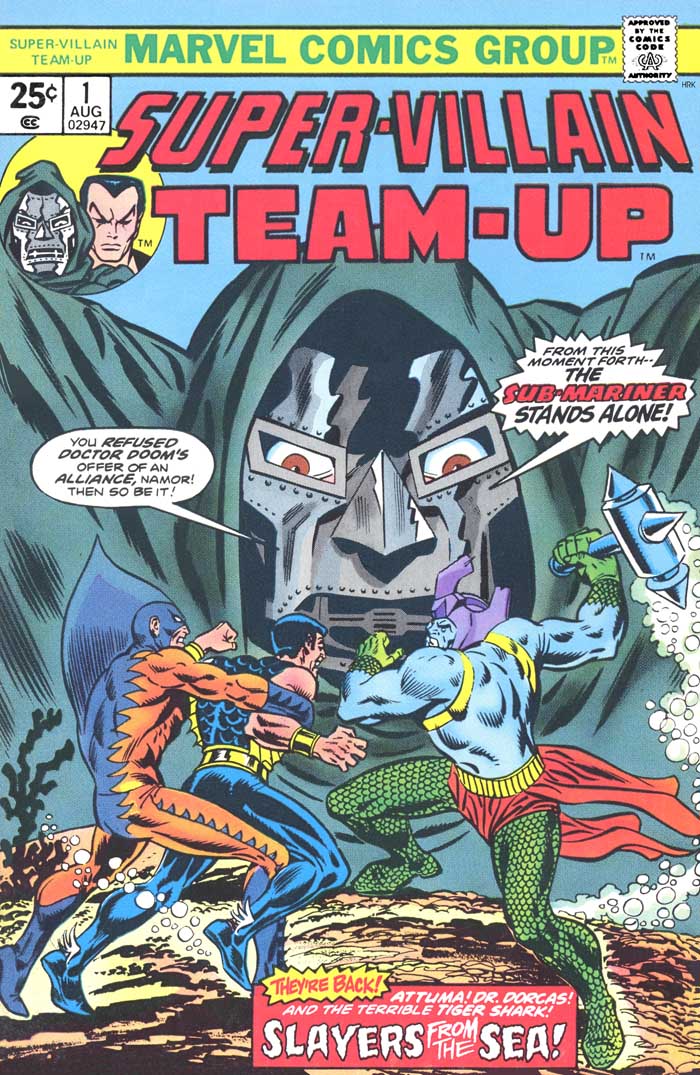 If the above cover looks familiar, it's because the almost-identical image of Doom had been used TWICE before, once on the cover of FANTASTIC FOUR #56 (by Jack Kirby & Joe Sinnott), and again on an interior page of MARVEL SUPER-HEROES #20 (by Larry Lieber, Frank Giacoia & Vince Colletta). 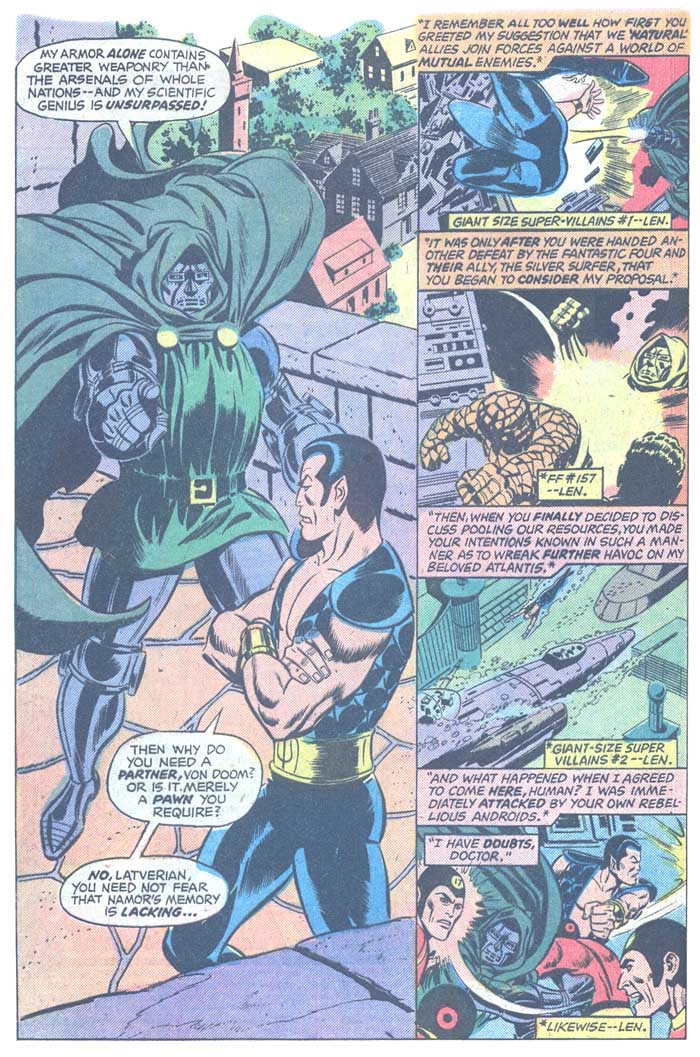 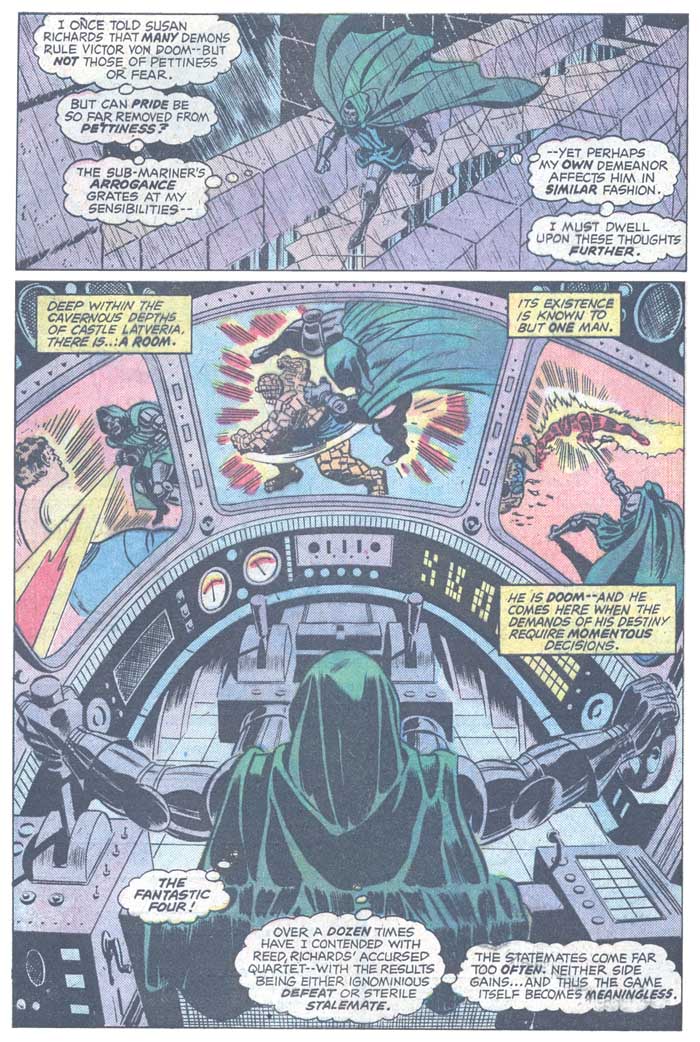 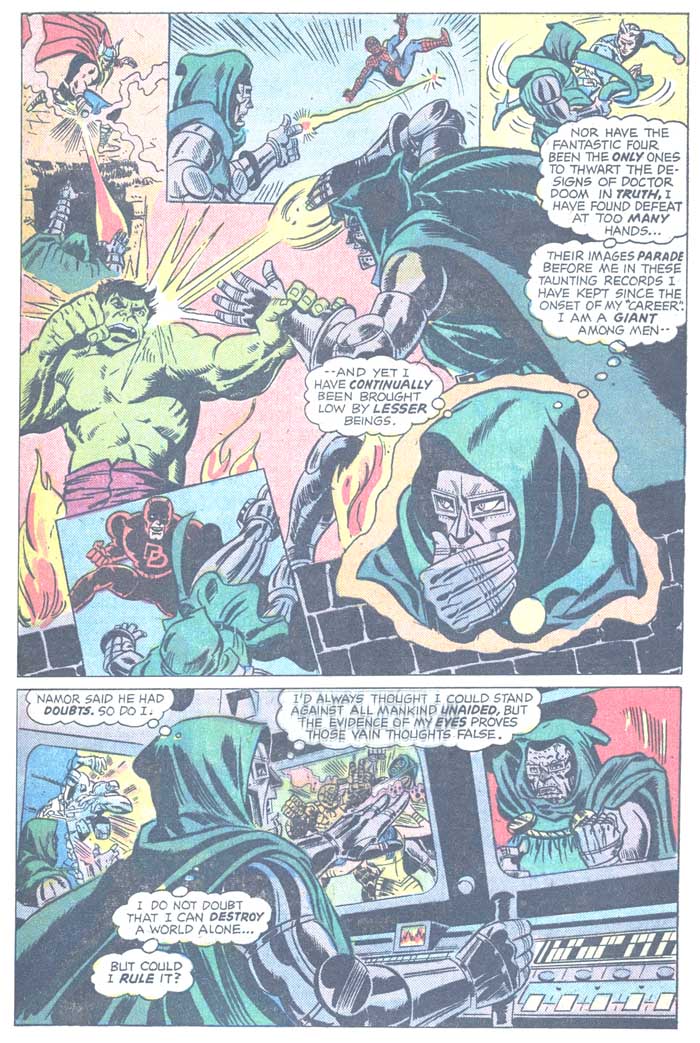 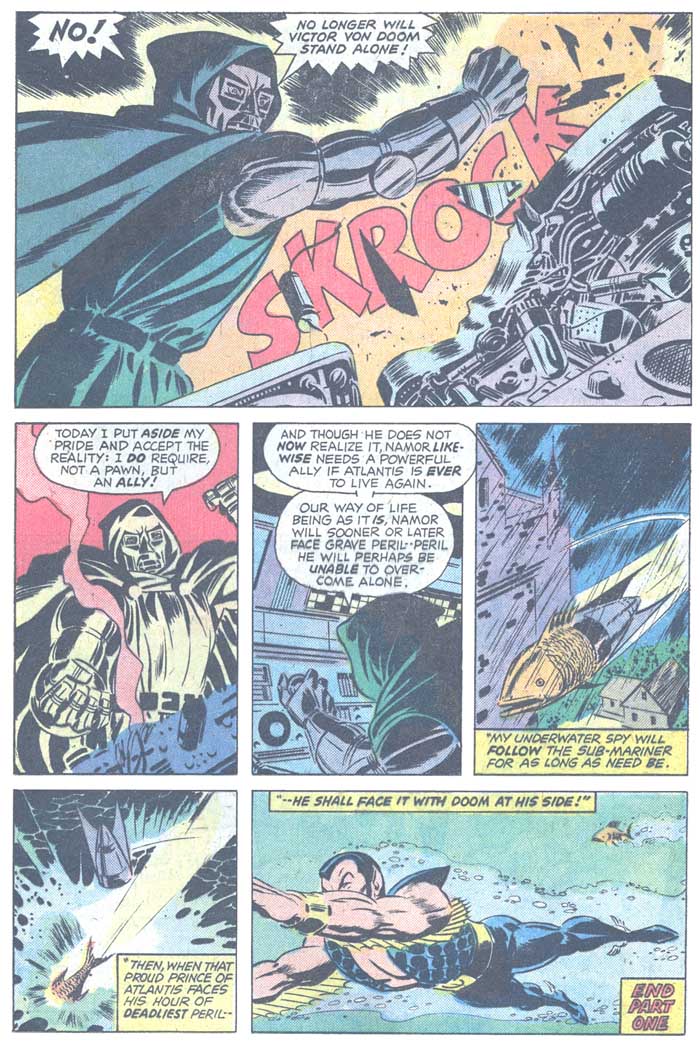 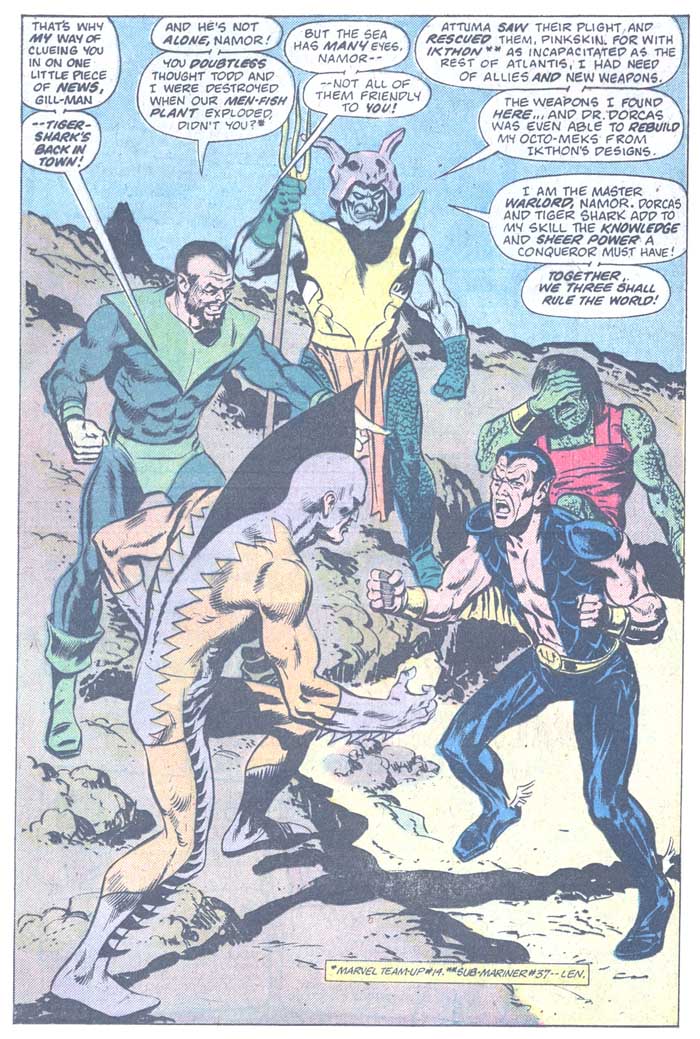 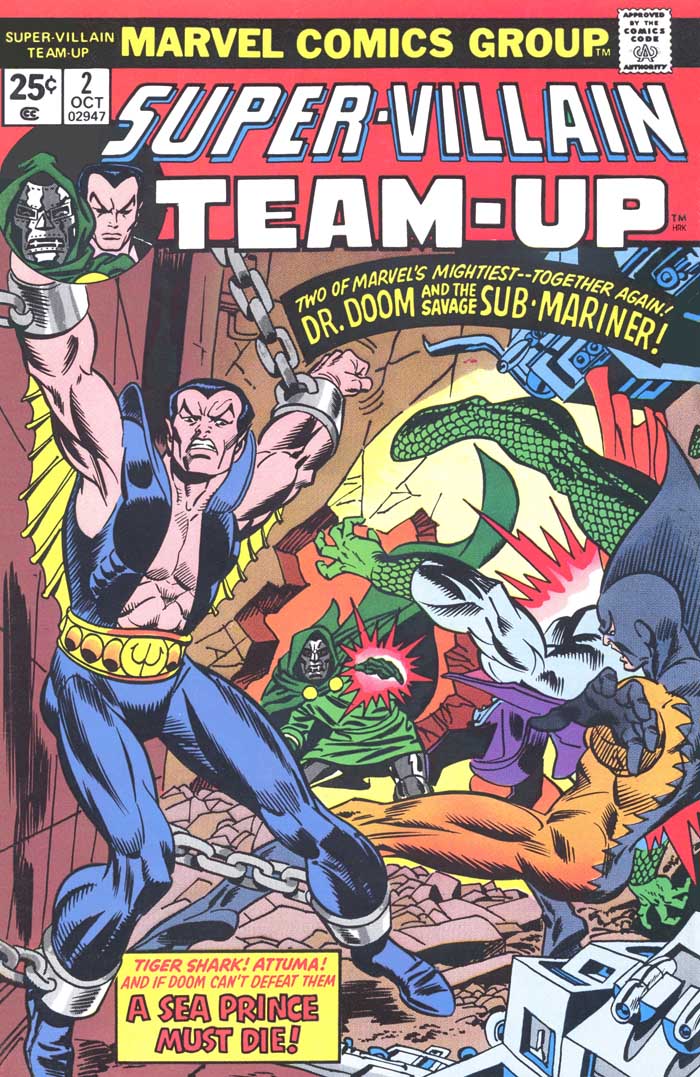 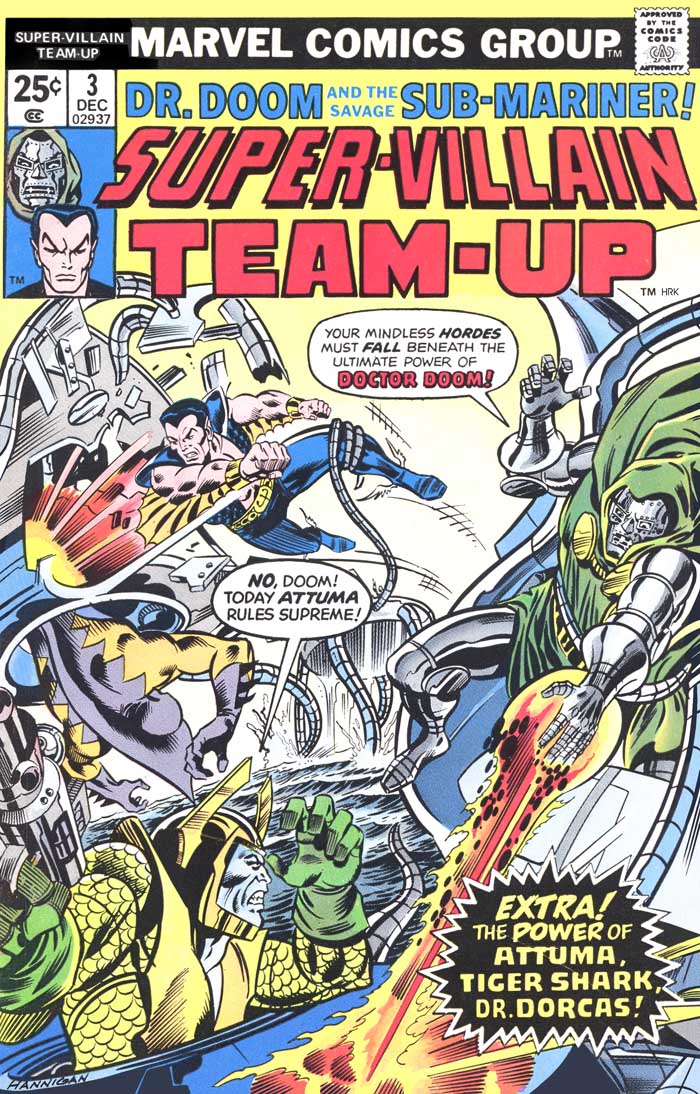 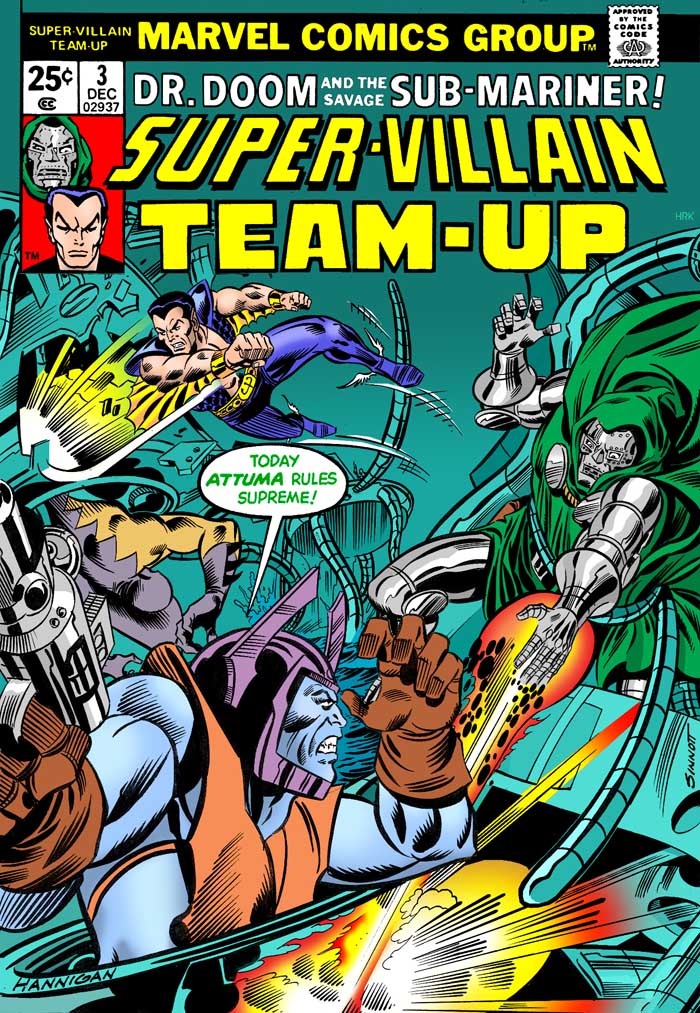 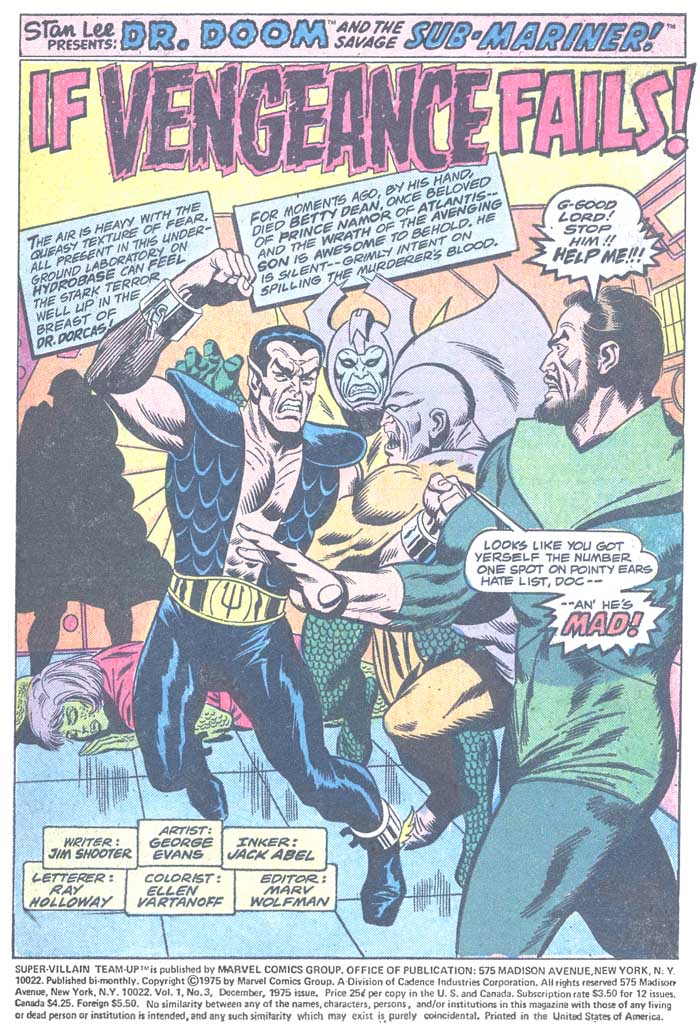 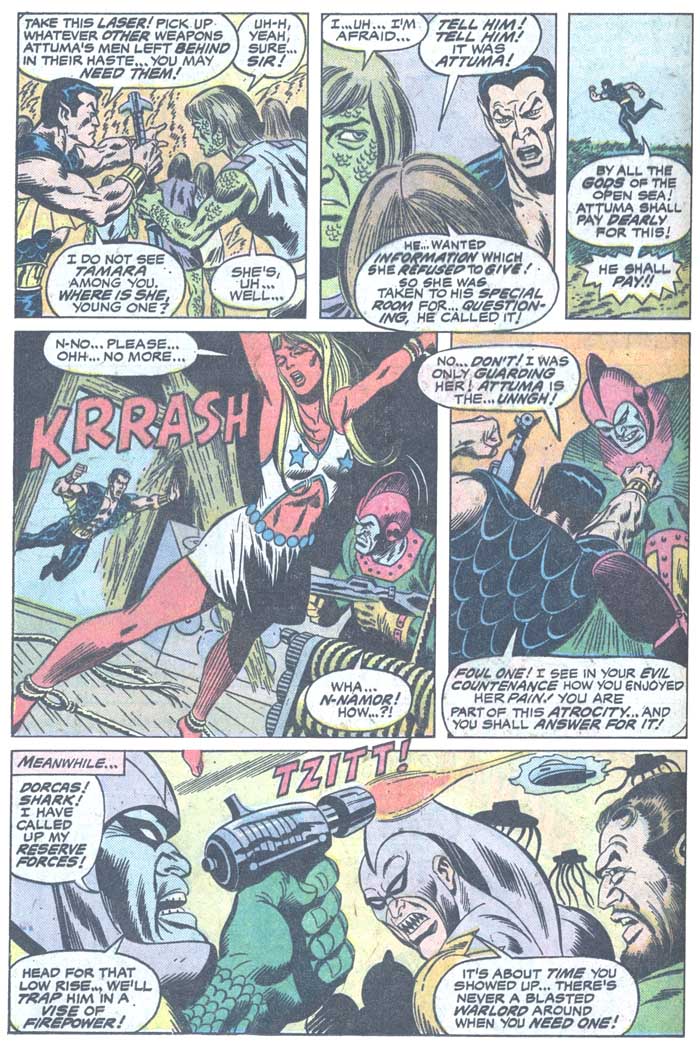 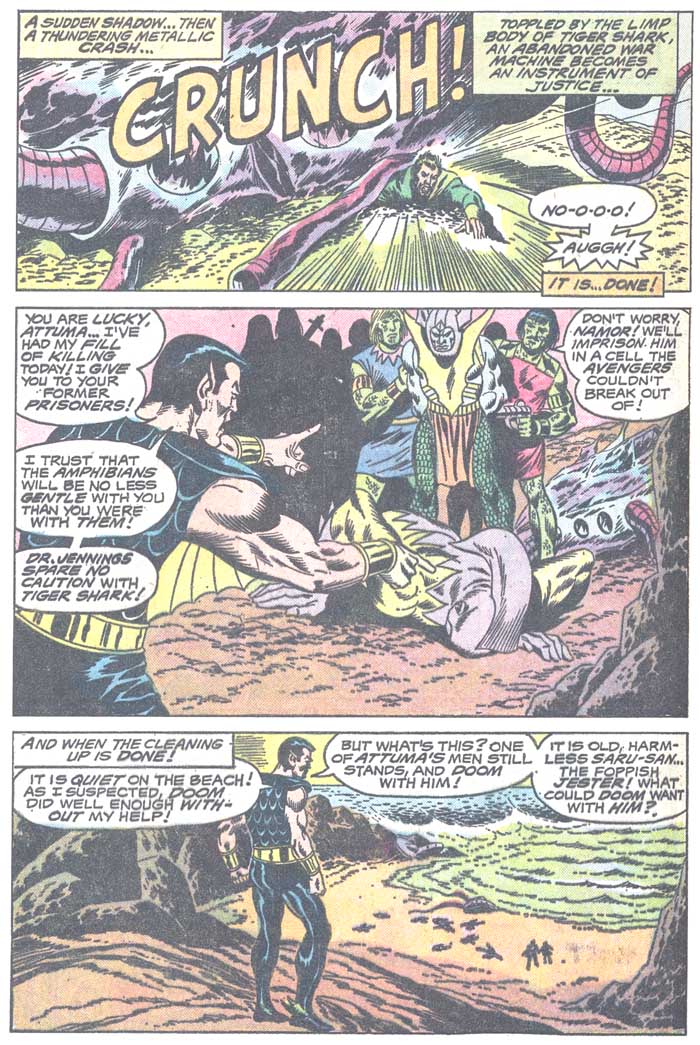 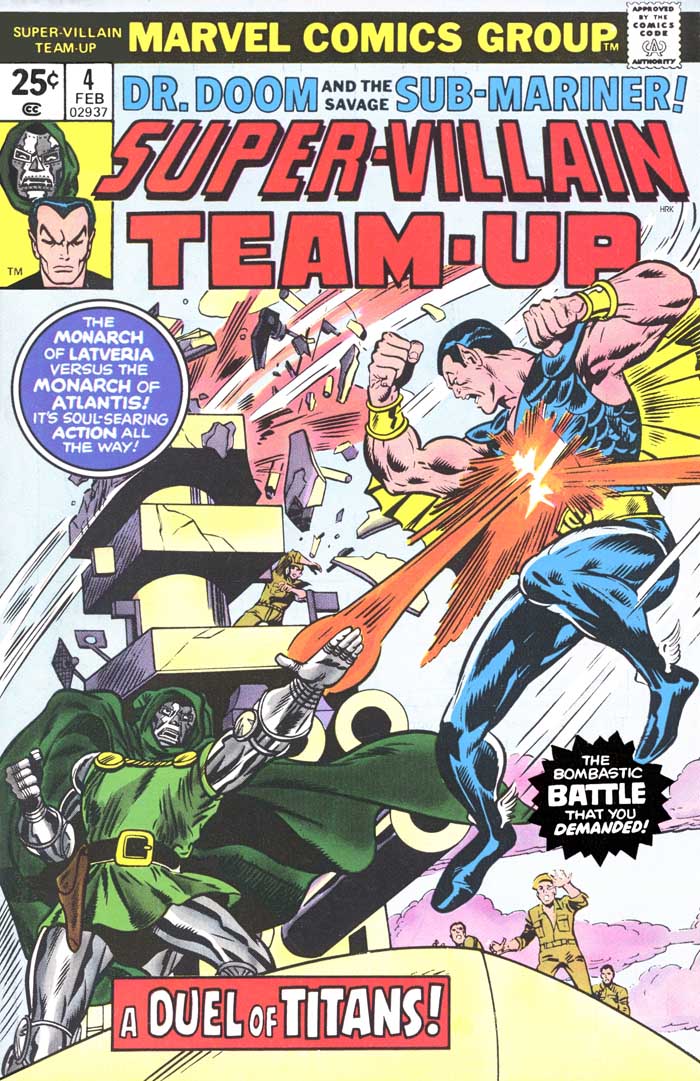 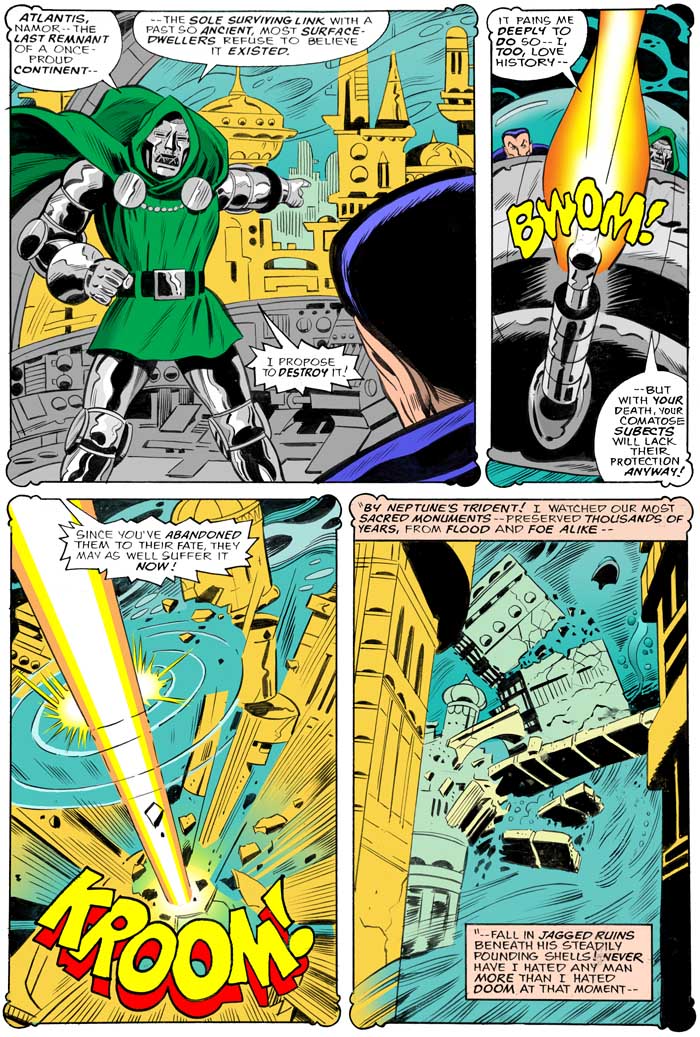 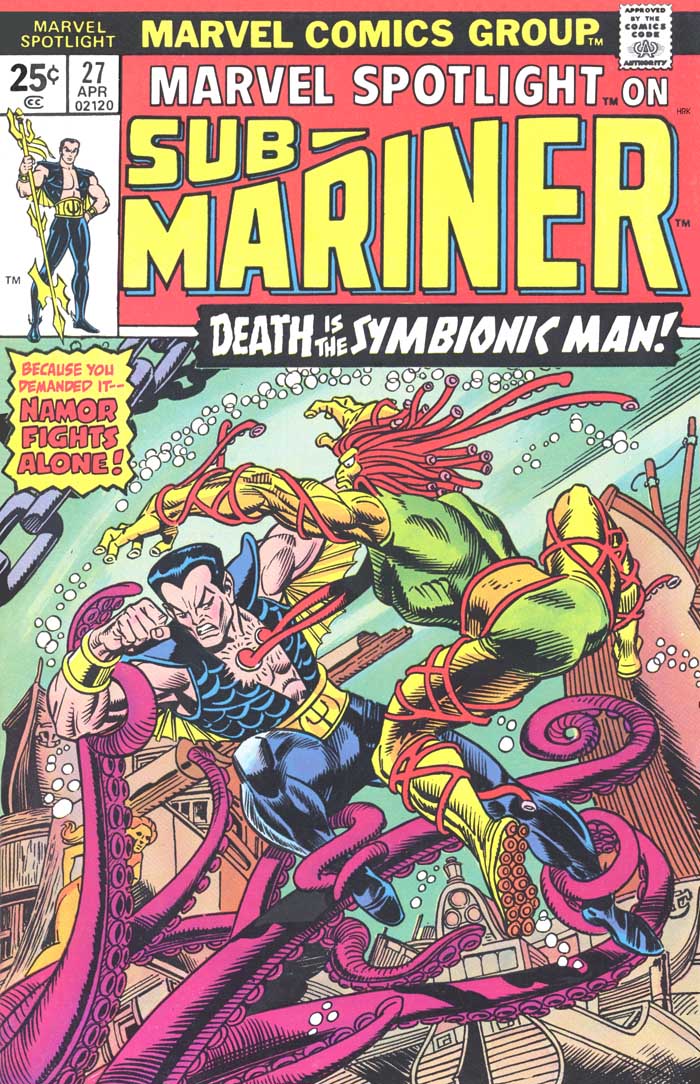 Apart from Gil Kane doing practically every cover Marvel put out around this time, WHY didn't they just get Jim Mooney to do his own cover? As seen below, Mooney captured the look of Namor MUCH better than Gil Kane ever could, and let's face it, if Bill Everett were still around at the time, HE would have redrawn Namor's face on that cover! 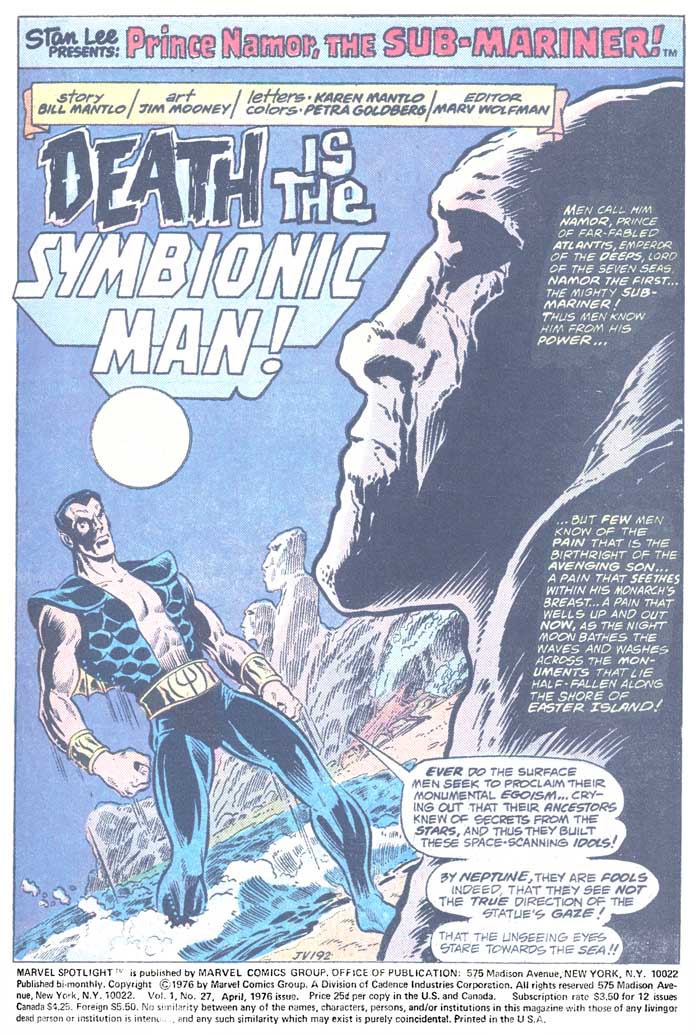 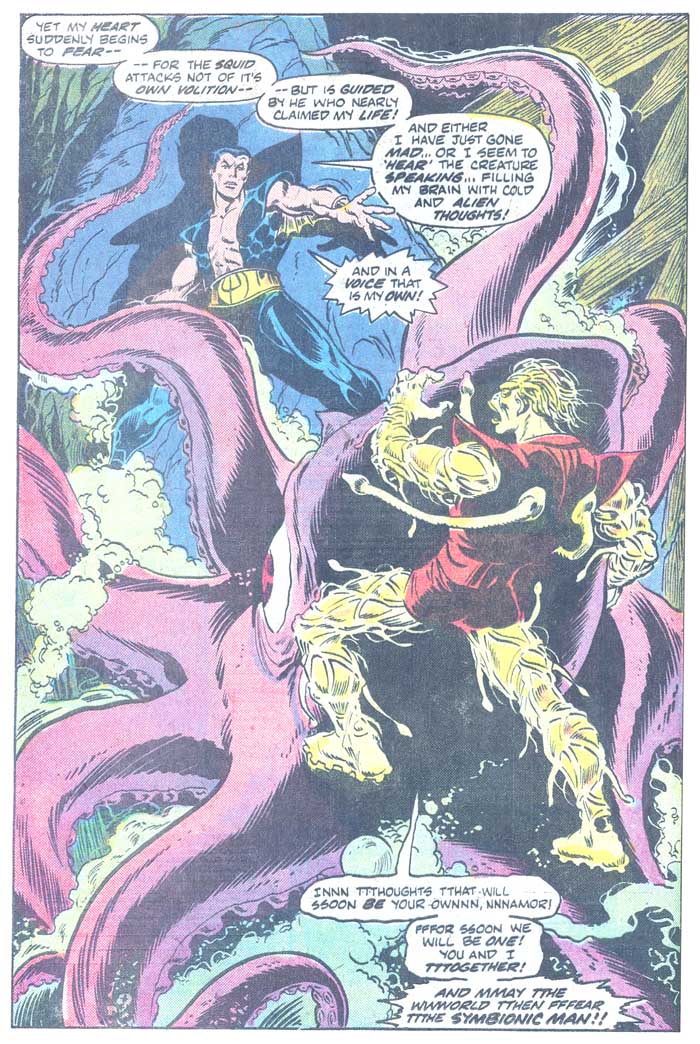 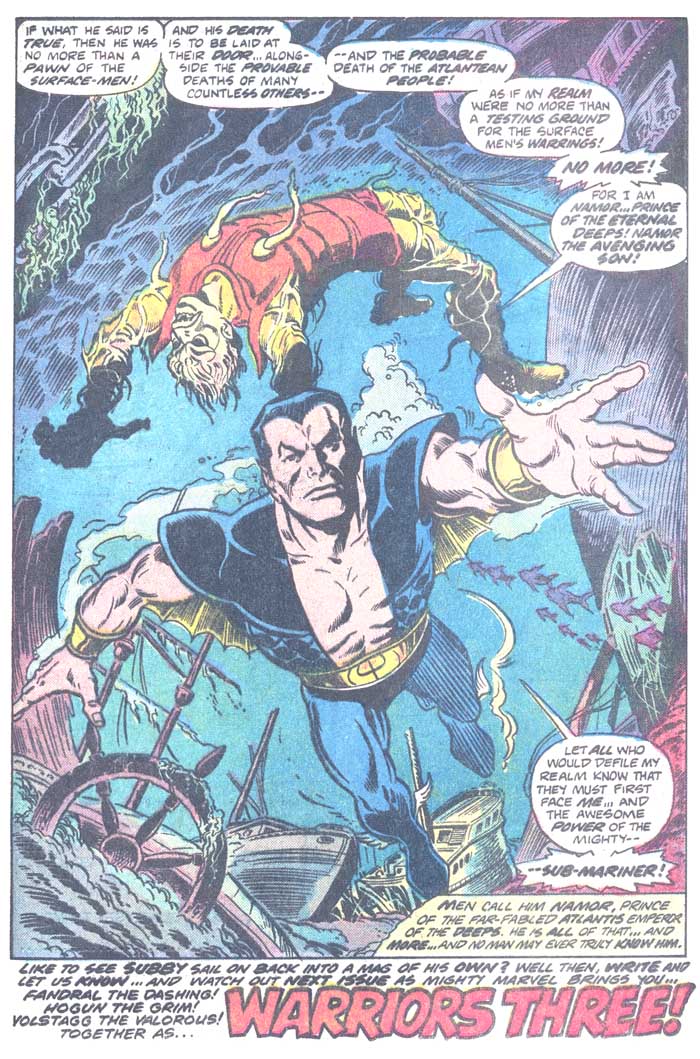 I don't know why Tony Isabella didn't finish the 3-parter he started (unless it had to do with the change in editors, an all-too-common occurance). But Jim Shooter only lasted 1 issue. As strange as the art looked to my eyes at the time, I kinda wish George Evans had managed to stick around longer, as his 1-1/2 issues (between #1 and #3) had a certain ruggedness that seemed to fit the stories being told better than most.

For #4, perrennial fill-in writer Bill Mantlo stepped in, having Doom & Namor slug it out for an entire issue in the wake of Doom having killed an innocent at the end of Shooter's issue (and after all the trouble Isabella went to have the 2 characters actually team up). About the same time, Namor was given a try-out in MARVEL SPOTLIGHT, which Mantlo also wrote. While Herb Trimpe had done SVTU #4 (and would continue on the book, doing 4 issues in a row, a "record" for this chaotic title), the solo story had full art by Jim Mooney, who'd inked MANY issues of SUB-MARINER during Roy's run and also pencilled 2 episodes of "Tales of Atlantis". Oddly, this was Mooney's only Subby story as penciller.

Perhaps the strangest thing about SVTU #4 and SPOTLIGHT #27 was the appearances of Simon Ryker, THE main villain of Rich Buckler's Deathlok The Demolisher series in ASTONISHING TALES, both taking place many years before the events in the Deathlok series occurred.

Unfortunately, neither of these issues had anything about them that really stood out, and it looked like SVTU was really floundering badly. It would take Marvel's then-TOP writer coming in for the next issue to finally turn things around. I may get to those here... one of these days!