DAREDEVIL, "The Man Without Fear", was apparently the first of 4 instances during the 1960's when Marvel publisher Martin Goodman decided to make use of the names of old characters from defunct publishers.  "Daredevil" was originally a character created by Jack Binder, then modified by Jack Cole & Charles Biro, and published by Lev Gleason Publications.  Binder's Daredevil was tremendously successful for several years, but like many costumed super-heroes of the 1940's, lost popularity by the end of the decade.

Pete Morisi, creator of "Johnny Dynamite", was a big fan of LGP's "Daredevil", made inquiries and was actually given the go-ahead to revive the character.  However, artist Charles Biro insisted on ongoing royalties for the use, so Morisi balked, and instead created a new character with a very similar costume, "Peter Cannon, Thunderbolt", which was published by Charlton Comics, though Morisi retained ownership!

Apparently, Martin Goodman, seeing the new Marvel Comics super-heroes were a success, wanted more, and told editor Stan Lee to come up with a new character named "Daredevil", having discovered the Trademark had lapsed, and no doubt hearing of the planned revival by Morisi. The order, coming from Goodman, no doubt explains the chaos and confusion that loomed over the early run of the book, as, clearly, Stan Lee had even less interest in the character than usual (despite his longtime claims that Daredevil was a "personal favorite" of his).

According to Steve Ditko, he was offered the chance to do the new "Daredevil", using the original costume, and he turned it down.  Perhaps his heavy schedule (at Marvel and at Charlton) got in the way. Perhaps he realized there might be legal problems reusing both the name AND costume (something that proved correct when Marvel later revived the western hero "Ghost Rider" in 1967).

What seems very clear is that Lee then had Jack Kirby design a costume, despite Kirby being far too over-extended at that point on other features to do the usual job of creating the character on his own and writing the initial series of episodes.  The costume for the new "Daredevil" is clearly inspired by that of a circus acrobat.  Kirby had created one of those before, in STUNTMAN (published by Harvey in 1946.)

In what must have seen as coming completely out of left field, Golden Age creator, writer & artist (and longtime Marvel alumni) Bill Everett got the assignment. Everett, best known as the creator of Prince Namor, The SUB-MARINER, had been with Marvel from its earliest days as a comics publisher.  Following a stint in the Army in WW2, he returned to Subby, and also worked on countless horror stories in the 1950's, until Goodman's company abruptly almost went out of business, a result of Goodman's taking bad advice from his accountant, shutting down his own distribution company, then watching the distributor he signed with instead get shut down as a result of a Federal racketeering investigation.  Everett spent the next several years working in advertising.

DAREDEVIL was to be his return to comics.  With the help and inspiration of his daughter Wendy, who was "legally blind", Everett made Daredevil a BLIND super-hero, something not seen since Dr. Mid-Nite at DC (or The Eclipse from the fanzines).  Everett may also have been inspired by the 1939 pulp magazine character The Black Bat, who was a District Attourney before being blinded by acid!  I recently re-read the 1st issue, and, like THE INCREDIBLE HULK #1 by Jack Kirby, it remains a fabulous, fun story.

Unfortunately, Everett's advertising work had him on more than a full-time schedule, which didn't leave much room for moonlighting on the side.  The 1st DAREDEVIL story, which someone had already foolishly put on the production schedule (!!!!!) was running terribly late, and the inks and backgrounds wound up being finished mostly by Steve Ditko and Sol Brodsky.  (A careful study of the comic reveals several action panels which were obvious drawn or redrawn by Ditko, the style is unmistakable.)  And so, Marvel had another terrific new character to add to its stable-- the book was already on the schedule-- but NOBODY was there to do it!  MADNESS!! 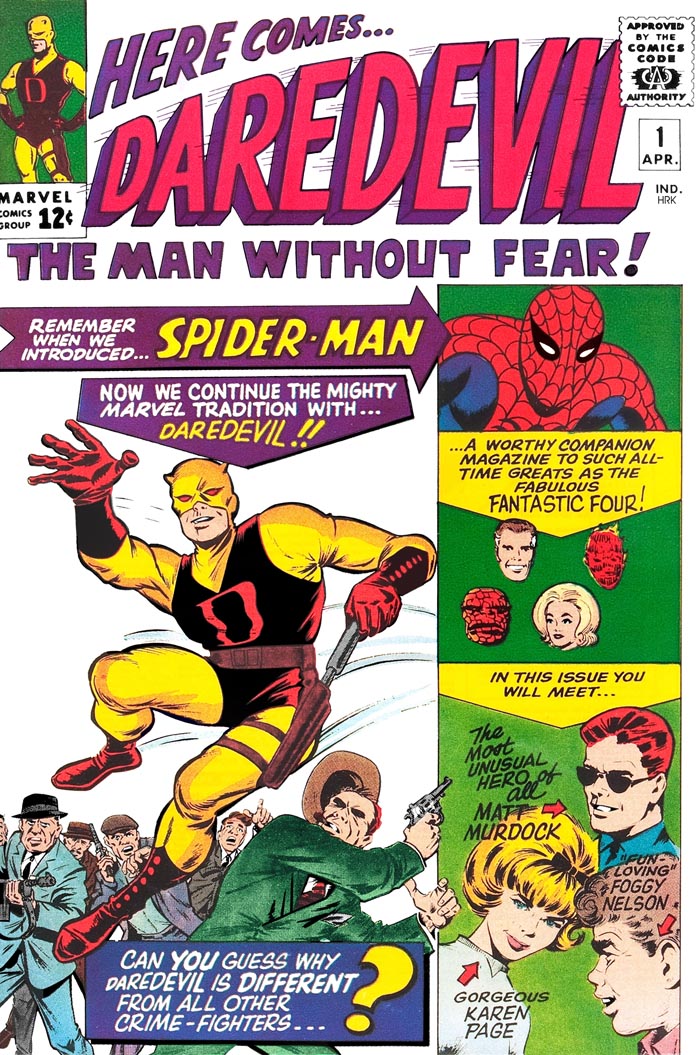 That 1st cover so was crowded!  It comes across more like an advertisement for a new product than an actual magazine cover.  Inspired in part by several foreign reprint editions, I came up with the following "fantasy" version of what the cover maybe SHOULD have looked like... 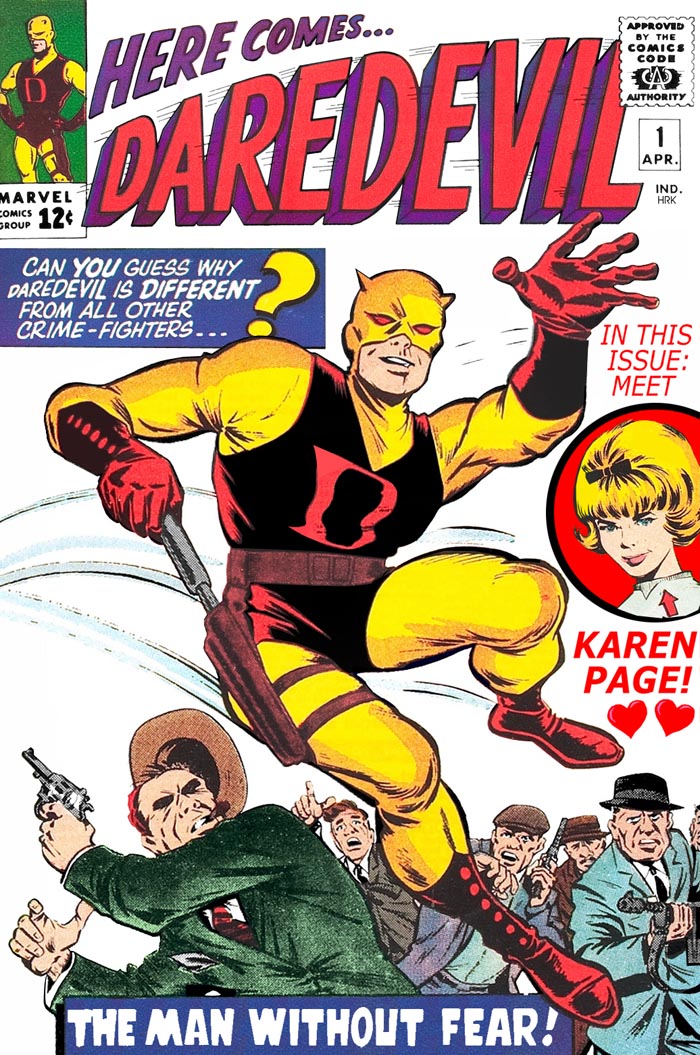 No other 60's Marvel super-hero had such bad luck with creators as DAREDEVIL. Following the abrupt departure of series creator Bill Everett, editor Stan Lee must have gone into a panic.  Perhaps he felt luck was with him when EC Comics alumni Joe Orlando got in touch.  Orlando had started in the biz as Wally Wood's assistant, then contributed to many issues of MAD, before moving on to Warren and a long career at DC Comics.  But in early 1964, he had a brief detour to Marvel Comics.  It didn't last long.  Editor Stan Lee was still working on the Marvel "formula", and he had very strong, very specific ideas of how he wanted his new line of Marvel Comics to be.  What he didn't have was any story ideas-- that is, until he saw what his "artists" were doing, and then decided they "needed" changes.  (How very "Hollywood"!)

Apparently there were far more changes made on Joe Orlando's stories for Lee than any other "artist" (talk about a misleading word!) who worked for Lee in the 60's.  Over the course of a mere 3 issues of DAREDEVIL, Lee, apparently not happy with the directions Orlando's stories were going in, had Orlando redraw from scratch as much as 50% of the pages he was turning in.  When Orlando "filled in" on an episode of Giant-Man and the Wasp in TALES TO ASTONISH #61 (Nov'64), the amount of changes were just too much for him to tolerate.  He walked, and never returned to Marvel.  (Steve Ditko wound up finishing the Giant-Man story, probably at very short notice.)

When I first read MARVEL MASTERWORK S Vol.17, which reprinted DAREDEVIL #1-11, I was unaware of any of this.  All I knew was, I loved the Bill Everett issue... and HATED the Joe Orlando issues.  All 3 of them. They're TERRIBLE.  I rank them as possibly 3 of the WORST Marvel Comics of the entire 1960's.  The plots are a shambling, chaotic mess.  While the actual drawing is nice, the page layouts and visual storytelling are terribly sub-par.  The inks by Vince Colletta-- I believe DD #2 may be the former romance artist's very first foray into the world of super-heroes-- are ABOMINABLY bad.  (He even managed to MURDER Jack Kirby's art on the cover of DD #2-- see below.)

Actually, I just got my first look at some of the original art for these issues, and I see clear evidence of at least 2 totally different inkers.  One of them appears to know what he's doing; the other is Vince Colletta. Leave it to Vinnie to hire assistants vastly better than he was himself!

Actually, the more I look at the page by the other inker, the more I suspect it was Joe Orlando. Which makes me think Colletta only got involved AFTER all the art for the entire book was already finished and turned in-- when Lee decided he "didn't like where the story was going". If THAT's the case, then it would suggest Orlando started out doing full art, but then decided it wasn't worth the hassle, if he was going to have to RE-DO so many pages from scratch.

I just don't understand how anyone but the most self-blinded die-hard fanatical "fan" can claim they "really like" these books.  Fortunately, this didn't last long. 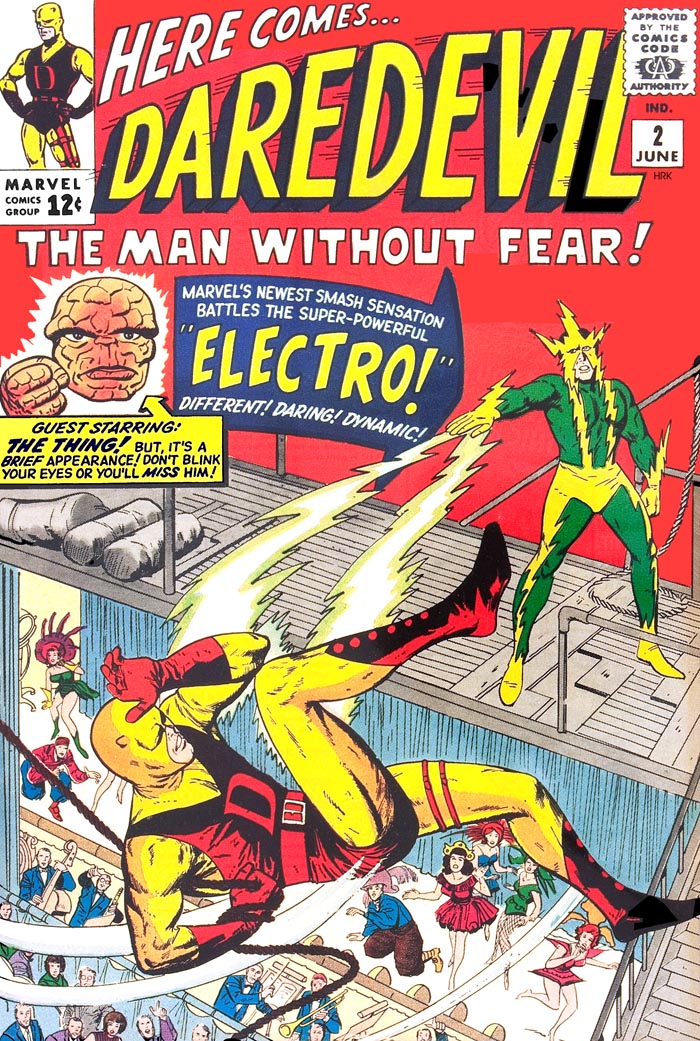 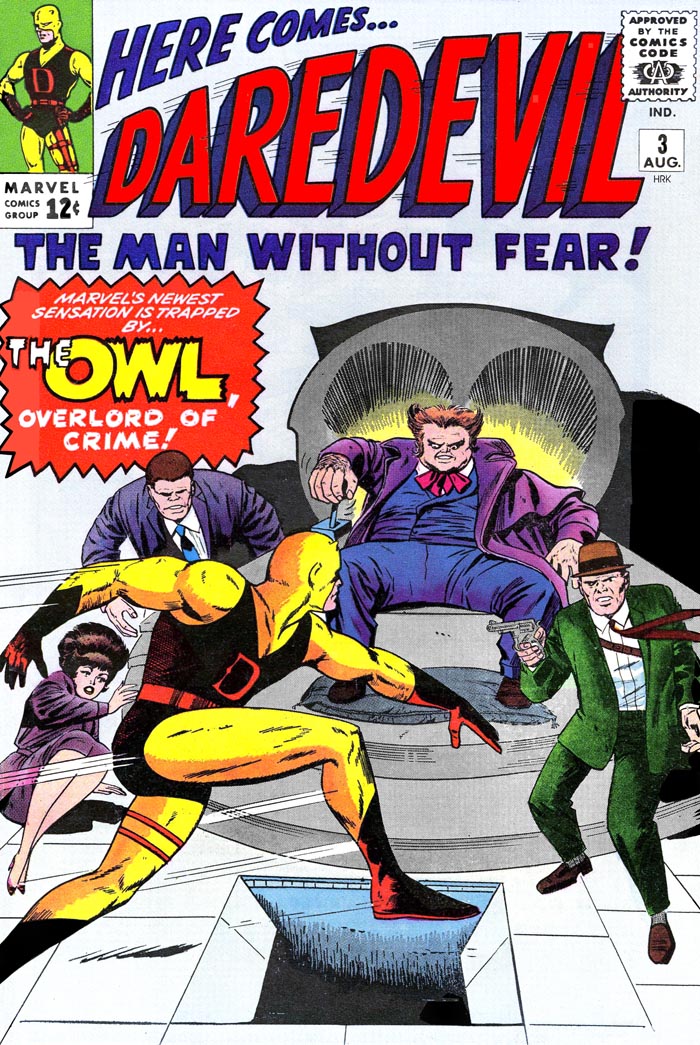 DAREDEVIL 3,  page 3
Inks by Joe Orlando?  There seems to be some real chaos going on here, note how the panels on the 2nd tier appear to have been cut-and-pasted down.  Changes made after-the-fact by the editor? 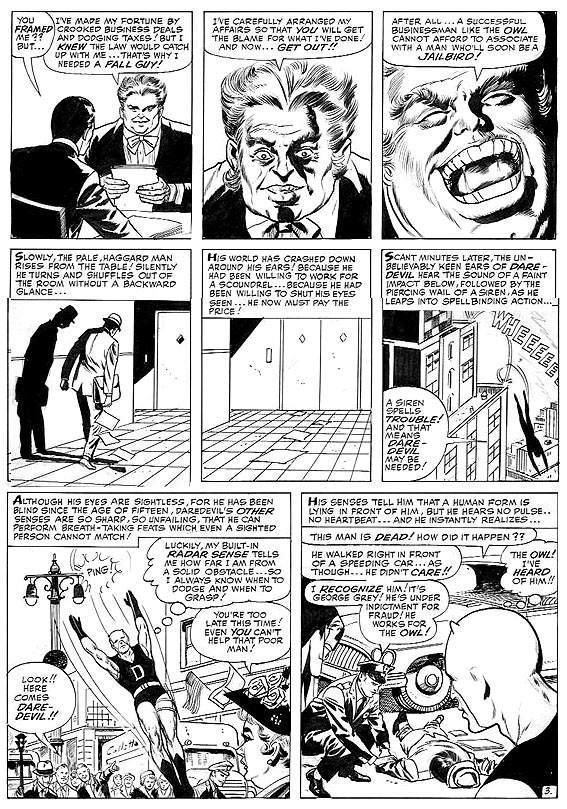 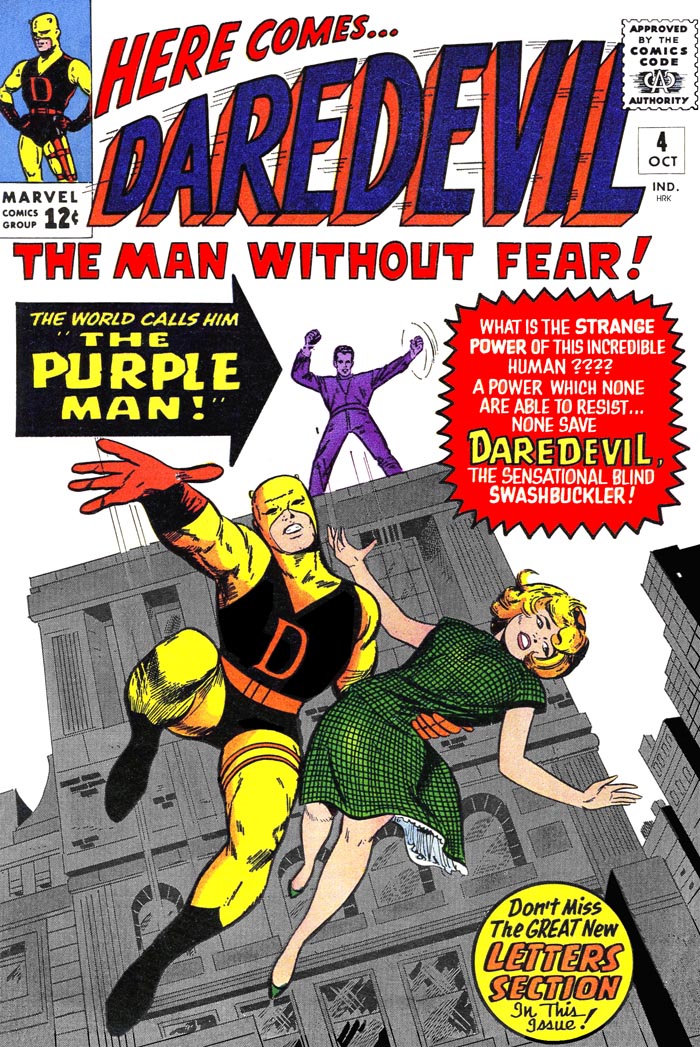 Boy!  On top of being one of the best creators, writers and visual storytellers in the biz, Jack Kirby sure could draw city buildings! This cover looks SO much better, now that I can actually see what I'm looking at.

Special thanks to:
Steve Thompson (whose blog inspired me to write this);
Patrick Ford (whose sense of history & logic added greatly);
Will Murray (whose article in ALTER EGO #118 filled in an important piece of the puzzle that had been missing);
Roy Thomas (who sent me a copy of the issue);
Dave Rawlins (who clued me in about Steve Ditko's almost-involvement before Kirby);
and Kevin Hawkins (who told me about The Black Bat!).