During the last 9 months Jack Kirby was at DC in the 1970's, a number of odd books he worked on were released.  These included 2 more 1ST ISSUE SPECIALs, 3 issues of JUSTICE INC., and, perhaps most bizarre, 1 issue of RICHARD DRAGON, KUNG FU FIGHTER.

Meanwhile, KAMANDI, OUR FIGHTING FORCES, THE SANDMAN and OMAC cranked on, the first 3 no doubt the reason why OMAC never became a monthly, which I dearly wish it had.  OMAC was, conceptually, so far ahead in so many ways of everything else Kirby was doing for DC at the time, it must have been particularly distressing for him that the powers-that-be apparently had lost all faith in his ability to create potential best-selling books.  In such an atmosphere, it's no wonder Kirby took seriously an offer from no doubt the LAST place he probably ever would have wanted to work for again... 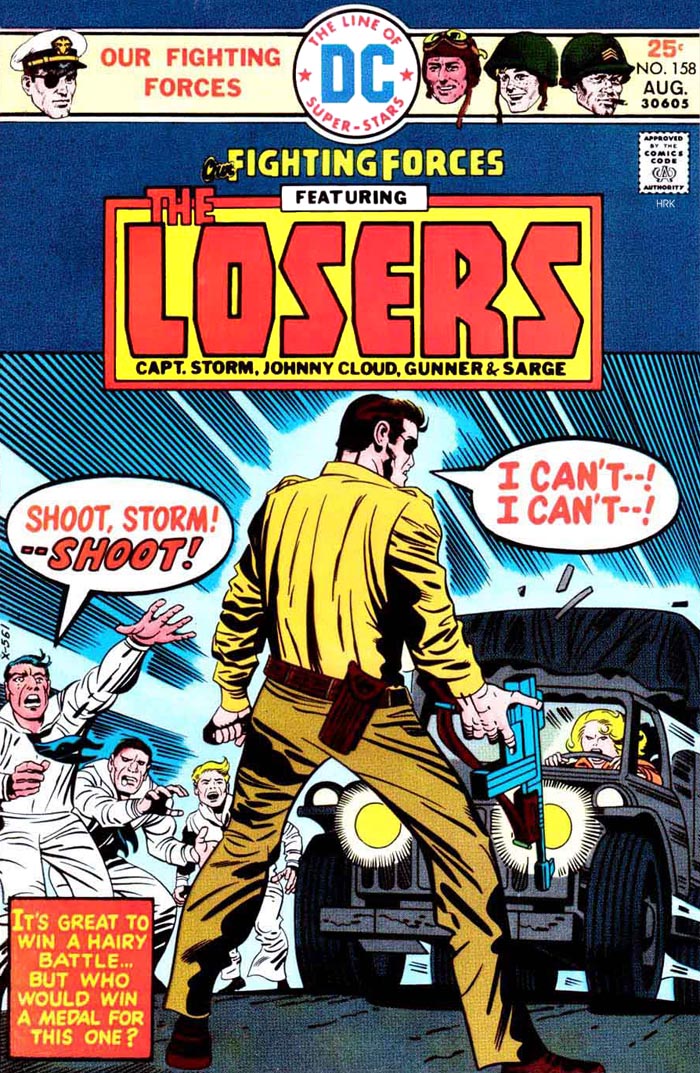 In another surprising "return" to a concept he'd done decades before, Jack Kirby's 2nd "rejected" pilot for DC to appear in 1st ISSUE SPECIAL was a brand-new version of MANHUNTER. What was very odd about this was that it appeared only 10 months after the Manhunter created by Archie Goodwin & Walt Simonson for DETECTIVE COMICS #437-443 (Oct'73-Oct'74) was killed off.  Considering Kirby may have been busy creating new concepts in the wake of MISTER MIRACLE's cancellation (the last issue, #18, had a Mar'74 cover date), Kirby's MANHUNTER may have been rejected purely because there was another one being used at the time that he was unaware of. 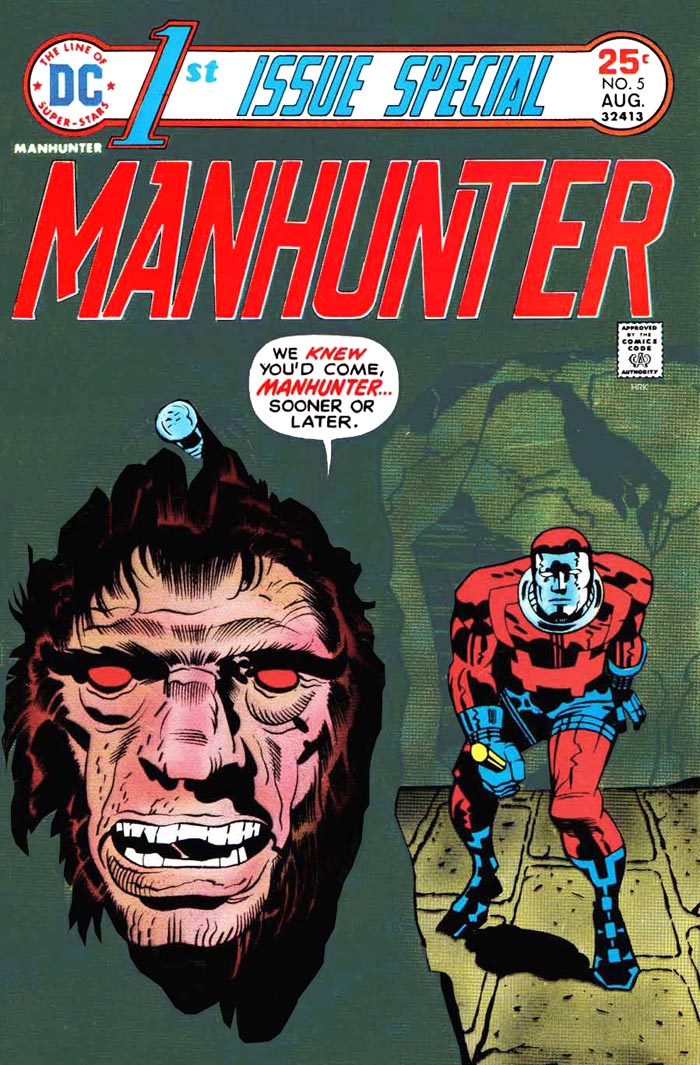 Richard Benson, THE AVENGER, was a pulp magazine hero created by Paul Ernst for Street And Smith in 1939,  the same publishers who gave us THE SHADOW and DOC SAVAGE.  According to several different articles I've found online, it's felt the series began "too late", at a point where pulp heroes were beginning to lose their charm and popularity, partly due to the newer comic-book costumed heroes.  More than 30 years later, in the wake of Marvel's DOC SAVAGE and DC's THE SHADOW, DC decided, once more "late in the game" to adapt THE AVENGER to comics.  Renamed JUSTICE INC. so as to avoid confusion with Marvel's superhero team THE AVENGERS, the series, as before, failed to catch on.

Denny O'Neil wrote all 4 issues, 2 of them adaptations of novels (one can see the patent absurdity of trying to adapt an entire novel in only 18 comic-book pages), 2 more original stories.  Following one issue illustrated by Alden McWilliams (see SPACE CONQUERORS) and with a cover by Joe Kubert, in a wild move, Jack Kirby & Mike Royer were brought in to do the art of the remaining issues.  Opinions I've read vary drastically, but it's my view that Kirby & Royer did some terrific work here, capturing the feel of the 1940's better than most, and, I'd say, they did better work, and were a BETTER FIT, than any of the artists I've ever see do DOC SAVAGE in the comics!  A shame they were doing the wrong book!!! 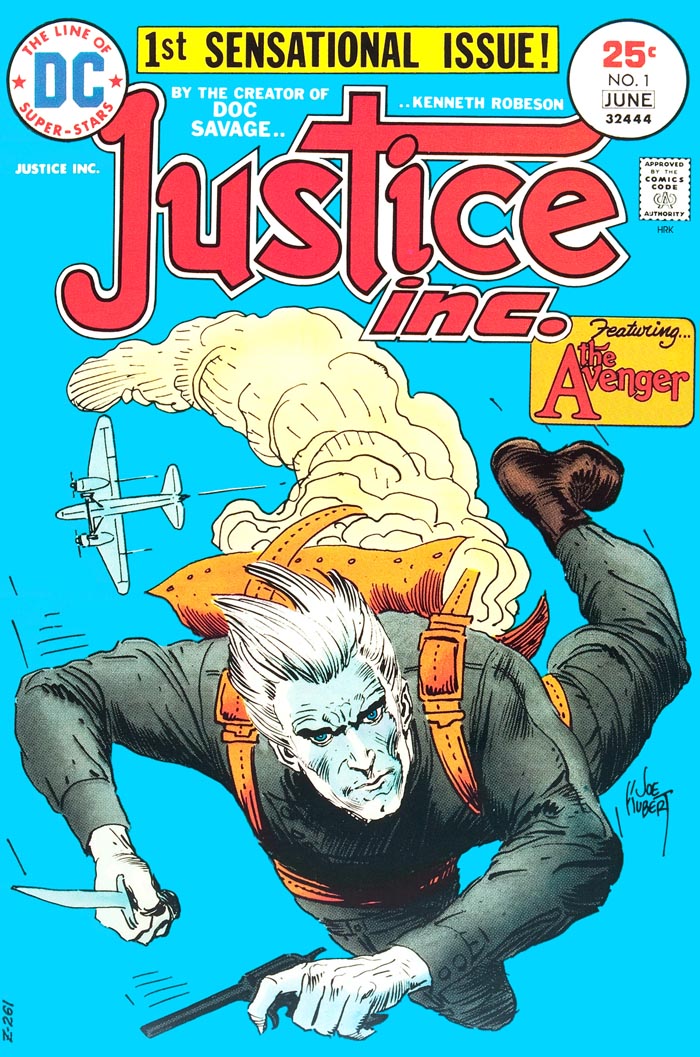 One month after his DC debute, The Avenger guest-starred in the next-to-last issue of THE SHADOW, courtesy of Michael Uslan & E.R. Cruz. 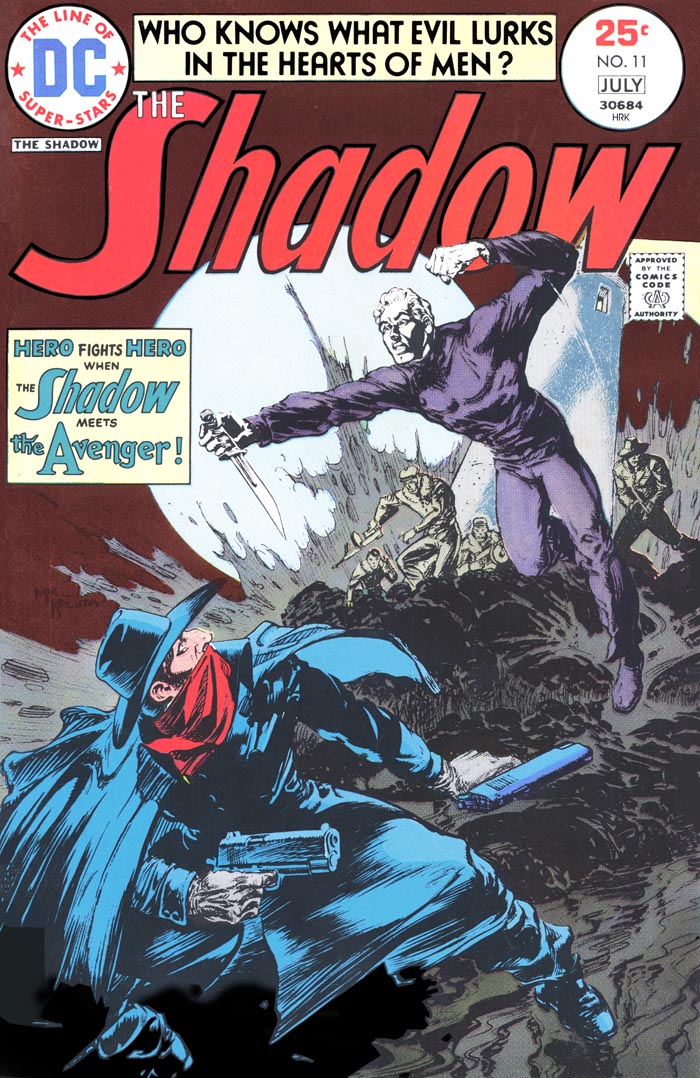 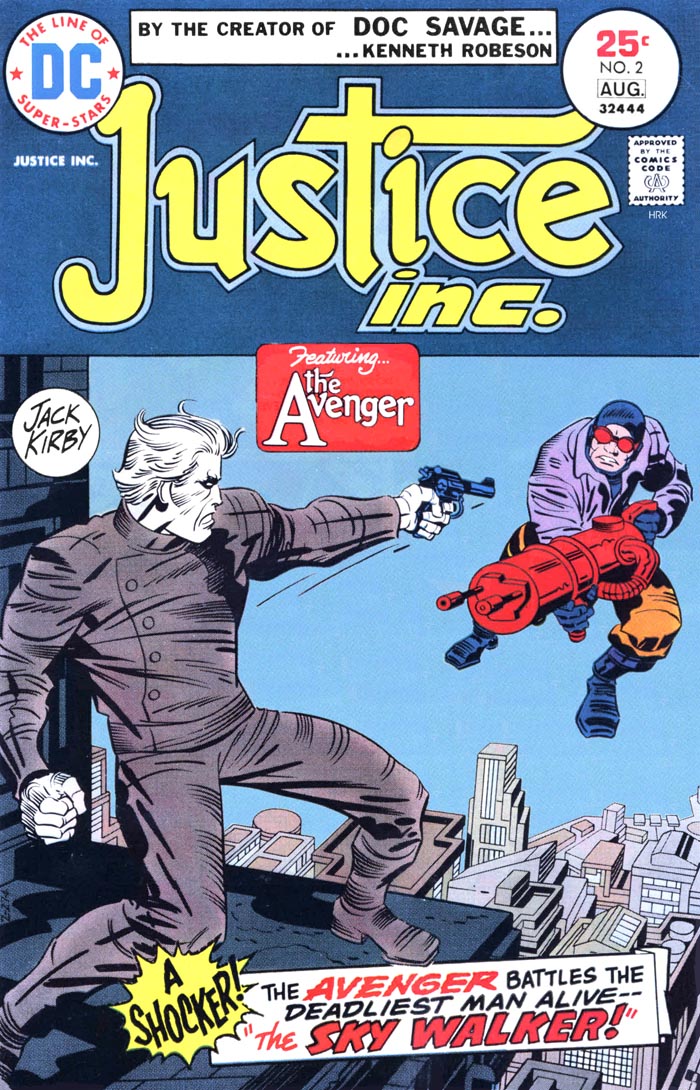 The 70's were a time for "design" disasters in the comic-book industry, across the board.  But I think DC Comics really went all-out with perhaps the WORST cover design decision they ever instituted with their Sep'75 issues. That extra-eide banner, with the title in big print, and all those faces shoved in, which squeezed down the room available for the actual logo, make some of what followed really painful to look at. 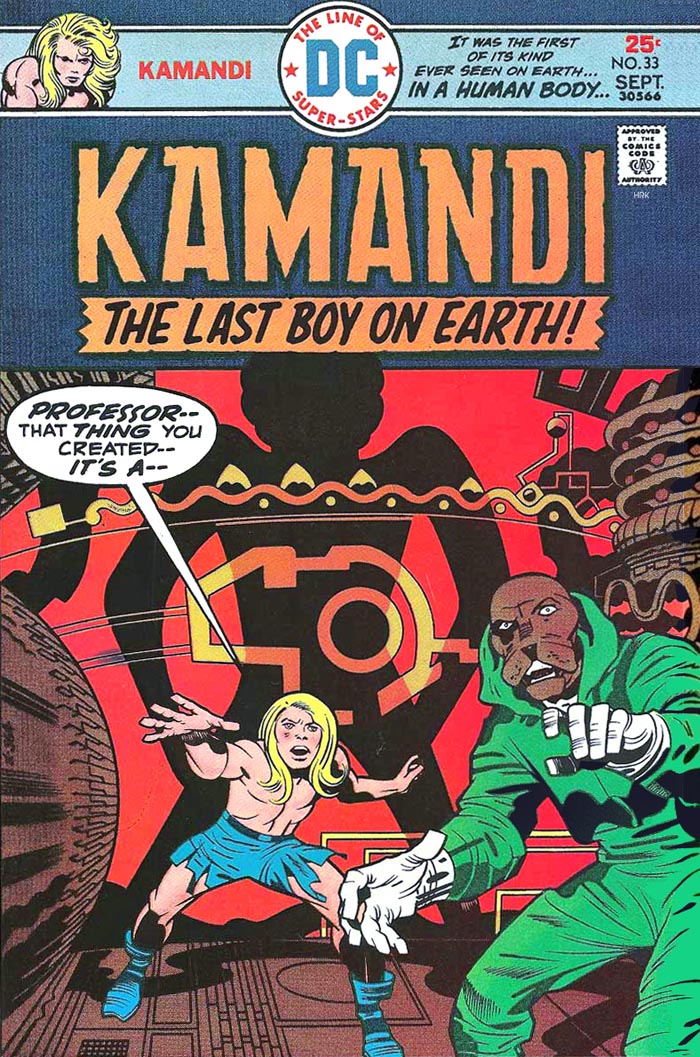 I really don't know what was going on with OUR FIGHTING FORCES, but some of these covers look like they took rough sketches and had them inked & published as-is. Here's a particularly lame one... (which I am all the same attempting to present in the very best possible light)

I'd also like to know who slipped up and had "Henry Jones" referred to on the cover as "Jeb". (Please note the name "Jed" appears on the cover of SANDMAN #4 the same month.  I'll take this an an "Oops!") 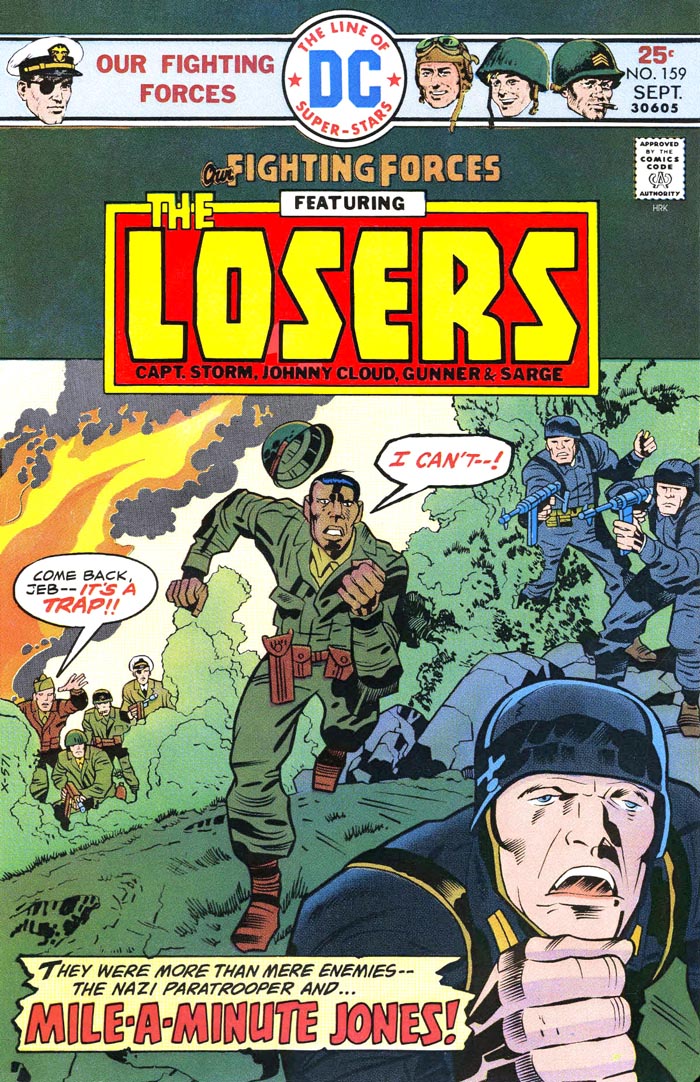 In need of work to fill out his contract, Jack returned to pencilling THE SANDMAN with the 4th issue, which was now written by Michael Fleisher instead of Joe Simon (who'd conceivced it with Jerry Grandenetti).  By my reckoning, #4 was probably the most wildly imaginative of the entire run, but it's clear, from the way the story once again makes next to no sense at all, that it's Fleisher writing the stories, not Kirby. 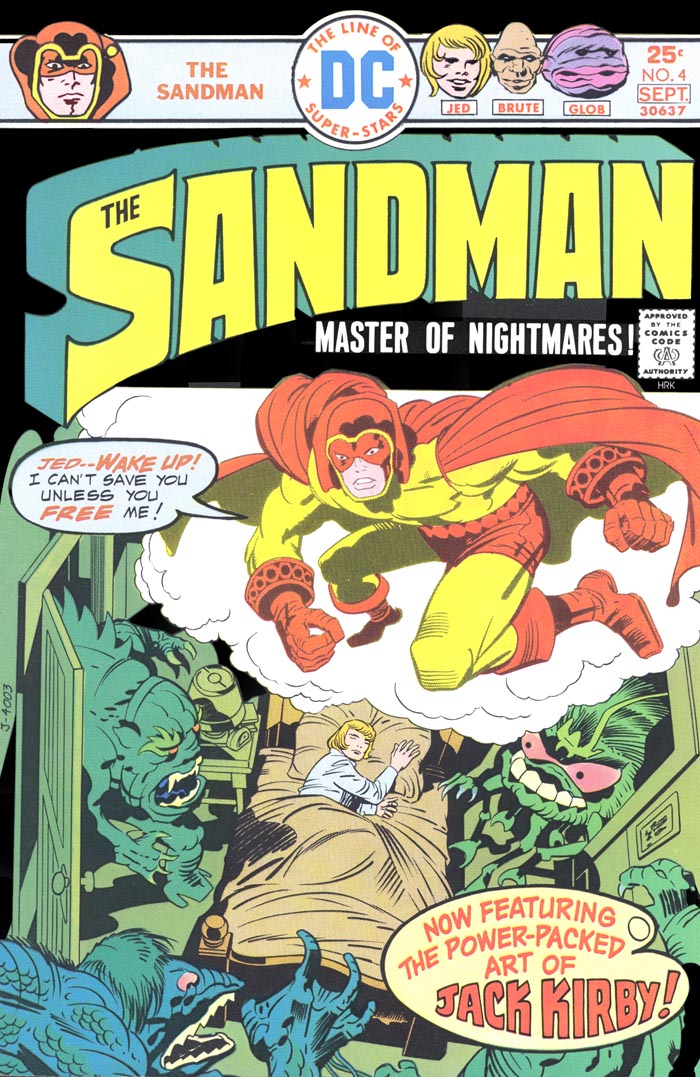 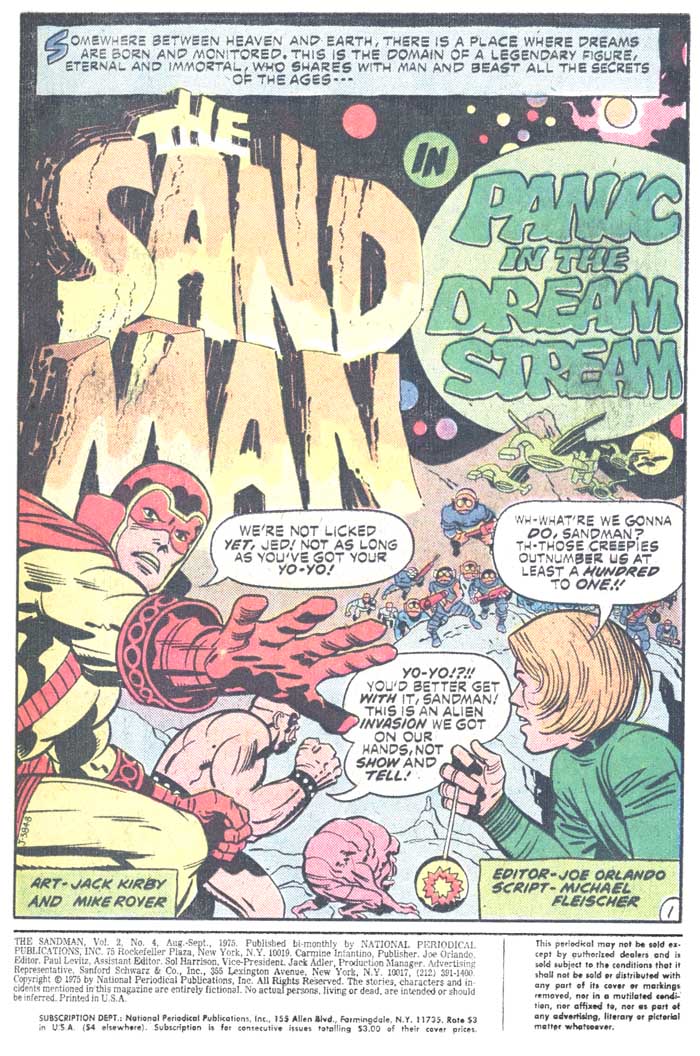 Apparently, the first thing Jack Kirby did after the cancellation of MISTER MIRACLE was DINGBATS OF DANGER STREET, a brand-new "kid gang" strip.  They were the latest in a long line, which included The Young Allies, The Newsboy Legion, Boy Commandos, Boy Explorers, Boys' Ranch, Challengers Of The Unknown (never mind they were adults), Fantastic Four (well, they often acted like kids), Avengers (ditto), X-Men (at least they were teenagers), The Howling Commandos (was there really that much difference between them and the Boy Commandos?), and, at DC again, The Forever People.  All going back at least to The Dead End Kids / East Side Kids / Bowery Boys for inspiration.  As one might expect with the way Kirby would get inspired and excited about a new project, he got 3 whole issues done... but instead of DINGBATS being his newest book, DC shelved it unpublished.  Which no doubt "explains" the 6-month stretch where the only Kirby books DC published were new issues of KAMANDI.

This also, no doubt, "explains" why both ATLAS THE GREAT and MANHUNTER only had one issue apiece done (unless there's more that has never surfaced).  ATLAS was particularly frustrating for me, as I really got a huge charge out of that story, except for the fact that it ends on a cliffhanger, obviously being intended as a 2-parter.  One can only surmise that after DINGBATS got shelved the way it did, Kirby didn't want to waste time doing a 2nd (or 3rd) issue of anything else, UNLESS DC actually indicated they were actually going to put the thing out.  So, the next new series to see the light of day was OMAC-- and even there, it was only done as a bi-monthly, another decision by DC that irks me no end.

So, when Carmine Infantino, desperate to find something, anything that might be a hit, hit upon the idea that "1st issues" sell better than 2nd issues, he concocted a new version of SHOWCASE named 1ST ISSUE SPECIAL. Unfortunately, the bulk of the run seems to have been not so much a launching pad for new ideas as a graveyard for already-rejected inventory ("unsold pilots", the TV networks call 'em). And so it was that ATLAS, MANHUNTER, and, finally, DINGBATS saw the light of day. 2 other issues of DINGBATS are known to exist, possibly more. But only one ever came out...  (And yet, they put out 6 issues of THE SANDMAN.  The mind boggles!!)

Note that on the following pieces, "Non-Fat" is clearly black, while "Good Looks" could be black, Spanish, or even Middle Eastern.  Another thing DC vetoed... 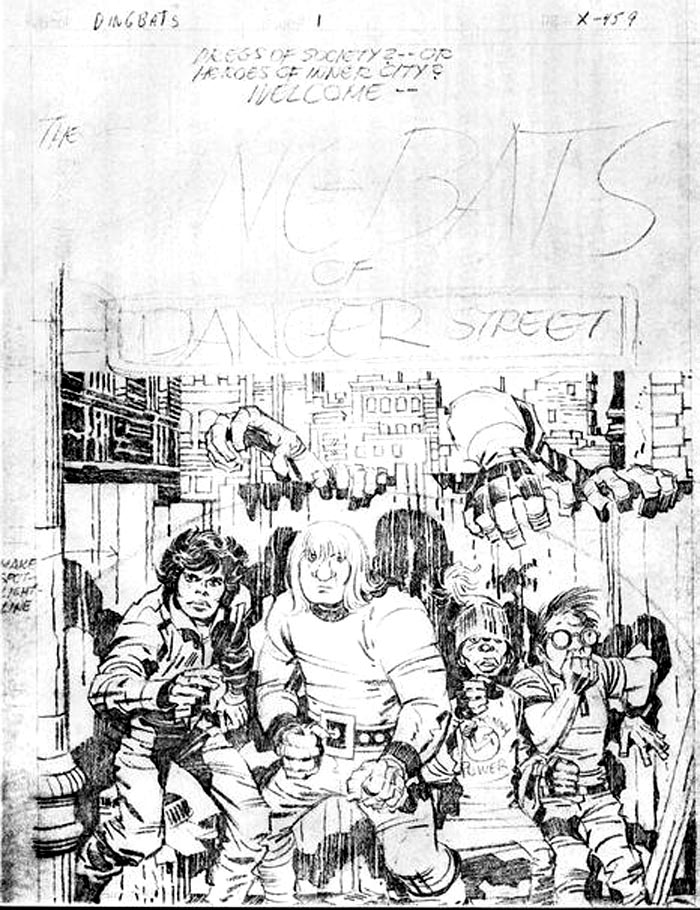 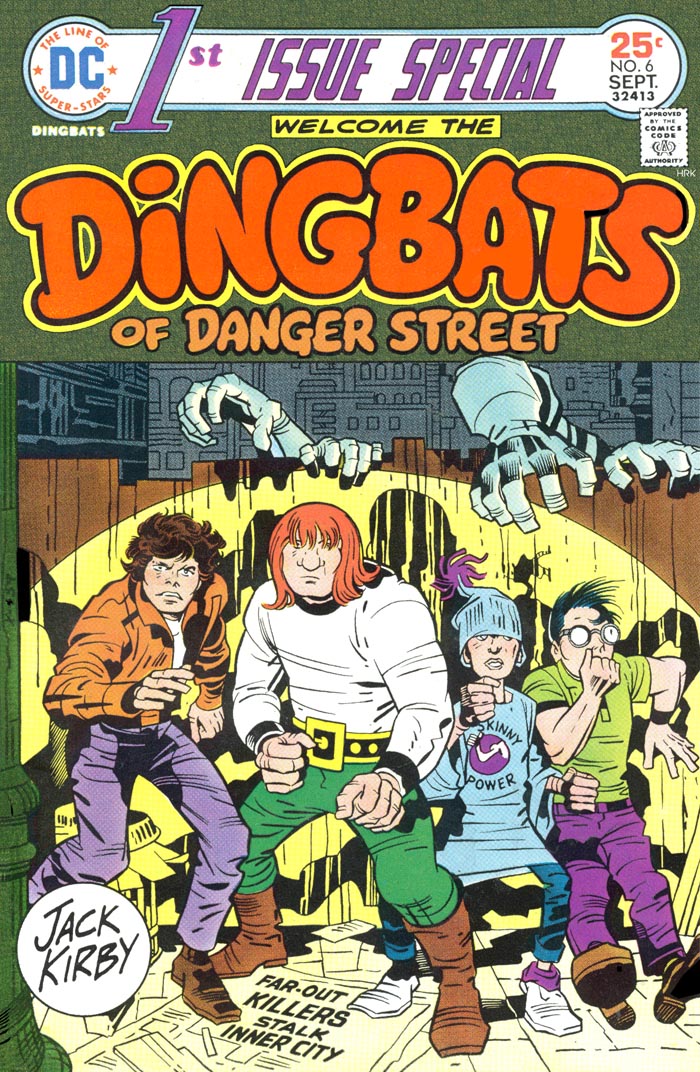 RICHARD DRAGON, KUNG FU FIGHTER was DC's long-overdue entry into the "Martial Arts" fad. Based on a novel by "Jim Dennis" (Denny O'Neil & Jim Berry), the first 4 issues served as an adaptation. As an example of the kind of chaos that was going on at DC at the time, each chapter of the adaptation had completely different artists working on it.  You'd never know by the cover, but somehow, Jack Kirby & Mike Royer did part 3 (of 4).  Ric Estrada, who arrived in issue #4, wound up doing 15 consecutive issues of the book.  One wonders why DC (or Editor O'Neil) couldn't have waited to begin the series until AFTER they'd found someone who'd actually stick with it. 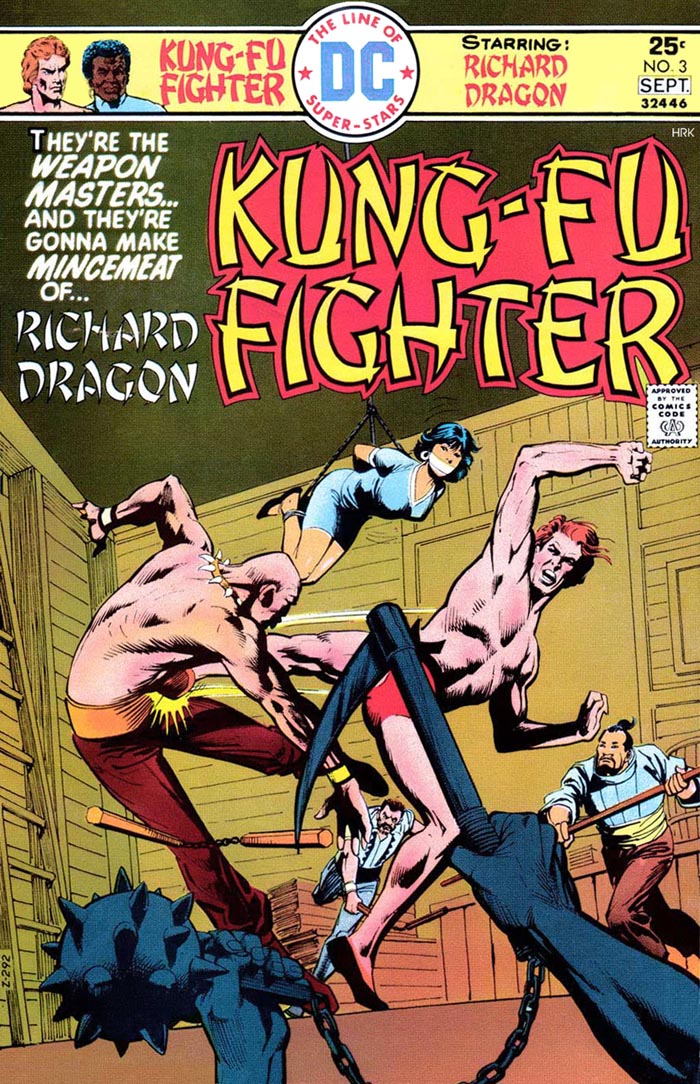 As if things weren't bad enough, at this point Gerry Conway took over as Editor of KAMANDI.  The first change was to have Joe Kubert begin doing the covers... 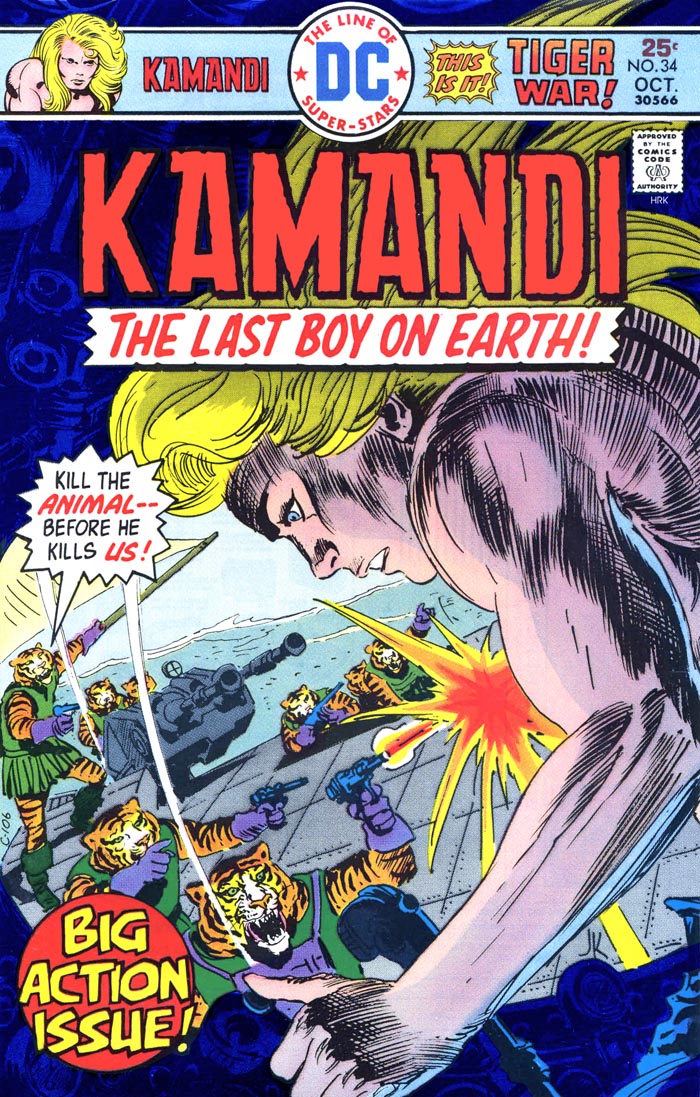 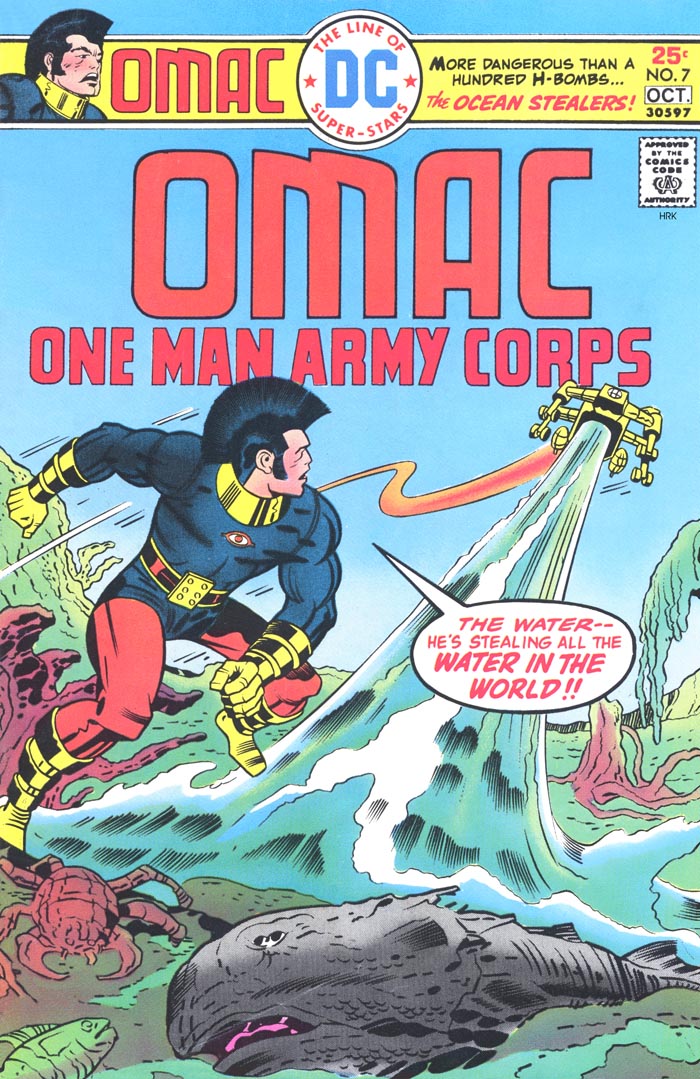