Adam Warlock had a very strange history, even for a comic-book character. His initial appearance was in FANTASTIC FOUR #66-67 (Sep-Oct'67), in a story by Jack Kirby which editor Stan Lee disagreed with so strongly (he couldn't understand it, and he felt "every" story needed a clear-cut villain) that he totally re-wrote the first part at the dialogue stage, resulting in Kirby (apparently) deciding to end it after only 2 episodes, instead of 4.  A 2-part follow-up in THOR #165-166, again by Kirby, seems to me would have made a lot more sense if the character called "Him" had fought Ben Grimm over Alicia, instead of Thor over Sif.  ("Warrior Madness"?  Get real! That's not Thor, nor is Sif a helpless female to be rescued. But Ben Grimm was notorious for his immature hot-headed explosive temper tantrums.)

Another creation of Kirby, The High Evolutionary, had debuted in THOR #134-135 (Nov-Dec'66), and turned up again in The Incredible Hulk series in TALES TO ASTONISH #94-96 (Sep'Nov'67). Beginning as a play on H.G. Wells' "The Island Of Dr. Moreau", the character wound up evolving himself to near-godhood (in a scene reminiscent of THE OUTER LIMITS episode, "The Sixth Finger", only taken to a further extreme).

These 2 Kirby creations crossed paths thanks to Roy Thomas & Gil Kane, who gave Warlock his new name and his own series beginning in MARVEL PREMIERE #1-2 (Apr'May'72) and continuing in THE POWER OF WARLOCK #1-8 (Aug'72-Oct'73), with a guest appearance in THE INCREDIBLE HULK #158 (Dec'72) along the way.  In a science-fiction allegory for a story from The Bible, The High Evolutionary created a near-exact duplicate of Earth on the opposite sude of the sun known as "Counter-Earth" (in a possible tribute to the Gerry Anderson feature film, DOPPLEGANGER / JOURNEY TO THE FAR SIDE OF THE SUN).  Somehow history was sped up along with evolution, and historical events repeated themselves. But along the way, The Man-Beast (from the earlier THOR issues) corrupted the grand experiment.  The god-like mad scientist considered destroying everything, until he recruited Warlock to fill the gap of his artificial world's "Savior".

Unfortunately, nobody involved with the start of the series hung on until the end, and later episodes were done with Mike Friedrich, John Buscema, Tom Sutton, Ron Goulart, and Bob Brown. 8 months after being cancelled in mid-story, the saga was brought to a conclusion in THE INCREDIBLE HULK #176-177 (Jul-Aug'74), by Roy Thomas, Gerry Conway, Tony Isabella, Herb Trimpe & Jack Abel (my favorite inker for Trimpe).  Crazy enough, THAT's where I came in!

Jim Starlin had come up from the fanzines, and had been very busy since arriving at Marvel, doing a story a month plus various covers, including IRON MAN, AMAZING SPIDER-MAN, THE AVENGERS, MASTER OF KUNG FU, MARVEL FEATURE (with The Thing), and CAPTAIN MARVEL-- the latter, a series which nobody had managed to handle well since its inception at publisher Martin Goodman's orders to secure the Trademark, as well as (reportedly) an aborted toy tie-in. Having used Mar-Vell's book as a platform to do his own "cosmic" epic, itself inspired to a large degree by Jack Kirby's "Fourth World" saga, Starlin blew everyone's mind and outdid expectations for the book by so much it made him a comic-book creator legend to be reckoned with. Fans may have been disappointed, even baffled, when he decided to leave the book after doing issues #25-34 (Mar'73-Sep'74), plus 3 pages in #36 (Jan'75). But, having taken one "lost cause" and turned it into something, he set his sights on another one... WARLOCK.

Rather than revive his own book where it left off, Starlin's new adventures began in STRANGE TALES #178-181 (Feb'Aug'75).  After being an anthology book in the 50's, and the home for the Johnny Storm The Human Torch series, Dr. Strange, Master of the Mystic Arts, and Nick Fury Agent Of SHIELD in the 60's, the book had its name changed to DR. STRANGE with issue #169 (Jun'68) and continued until cancellation with #183 (Nov'69). Despite this, the title was revived-- with another #169 (Sep'73) as a showcase for such series as Brother Voodoo, The Golem, and, finally, Warlock.

Determined to out-do himself, Starlin did "EVERYTHING" on the first 2 installments-- story, dialogue, pencils, inks, and possibly even the colors. He got help from Alan Weiss on #180, and inks by Al Milgrom on #181. Sadly (in my view), the longer the series went on, the less Starlin did on it himself, cutting back to just layouts and intending to hand over the pencilling entirely to someone else before it was cut off, too soon. But the early installments remain a TRIUMPH of what ONE creator can do when they focus al their energies on a project.

By the way-- it took me decades to find this out, but if there's one artist Jim Starlin was inspired by over the years, it's Reed Crandall.  Specifically, his art from the early-1940's. Check out DC's BLACKHAWK ARCHIVES book to see what I mean. The similarity is spooky! 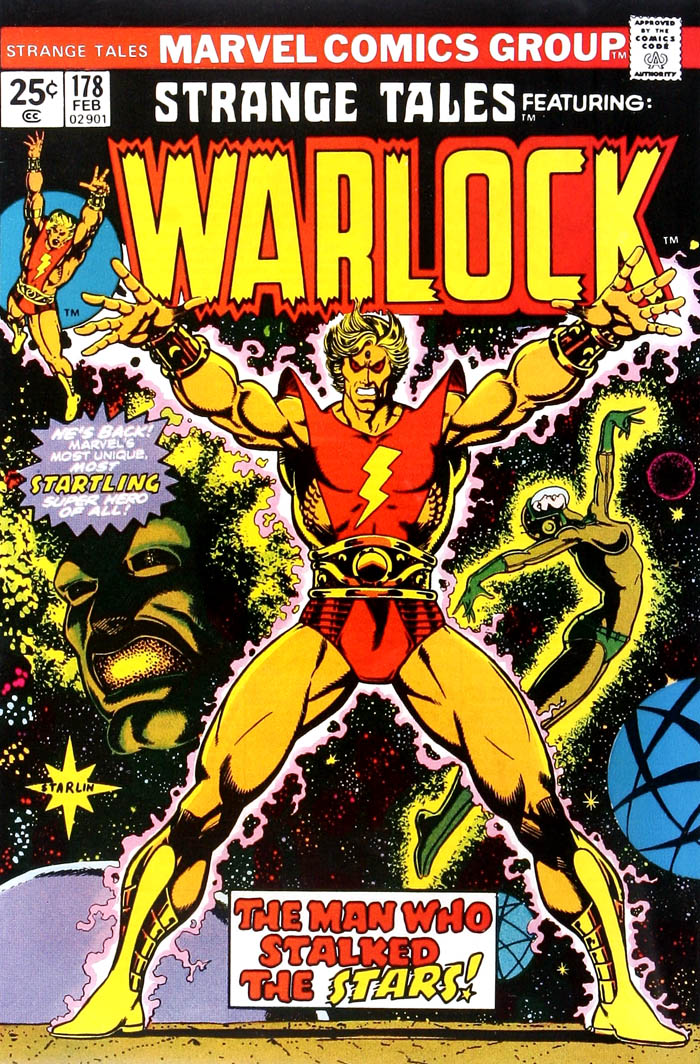 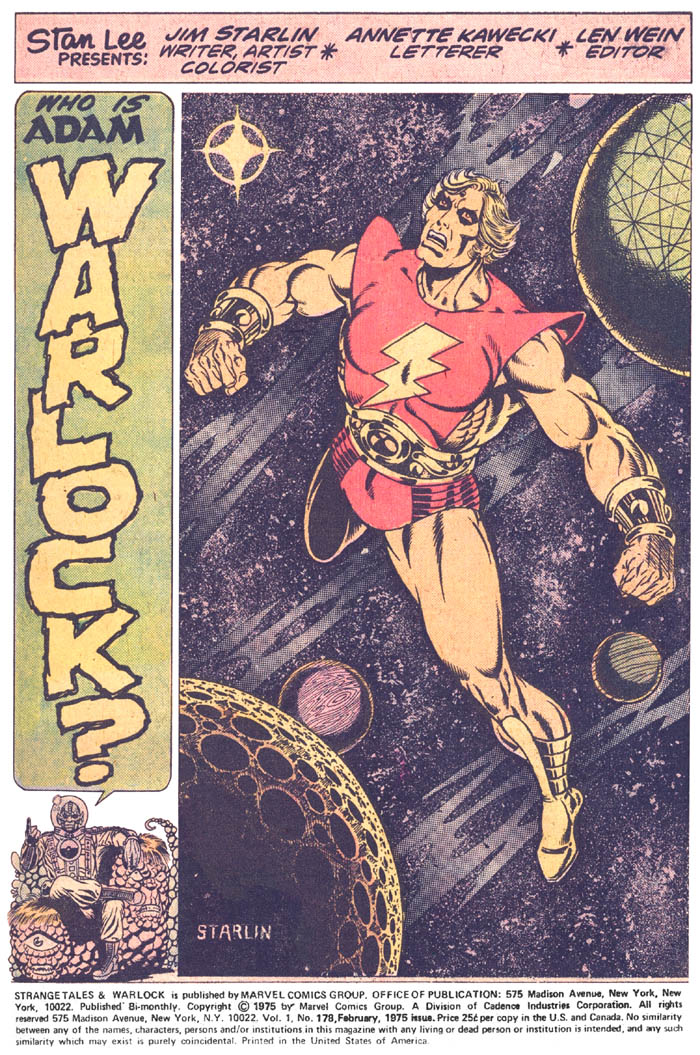 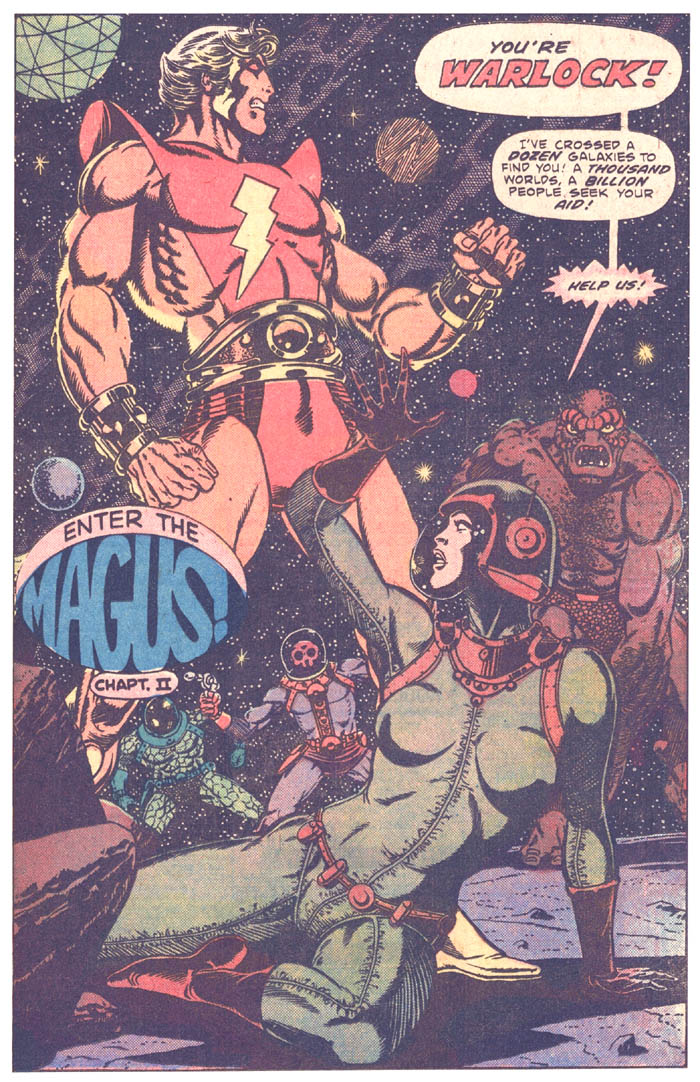 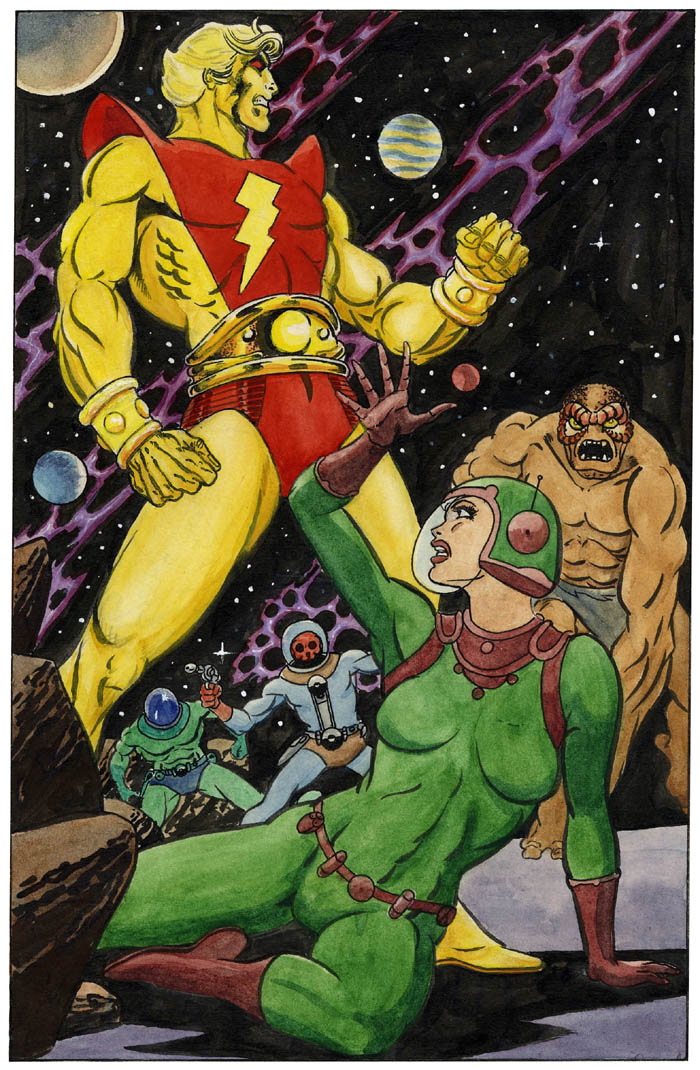 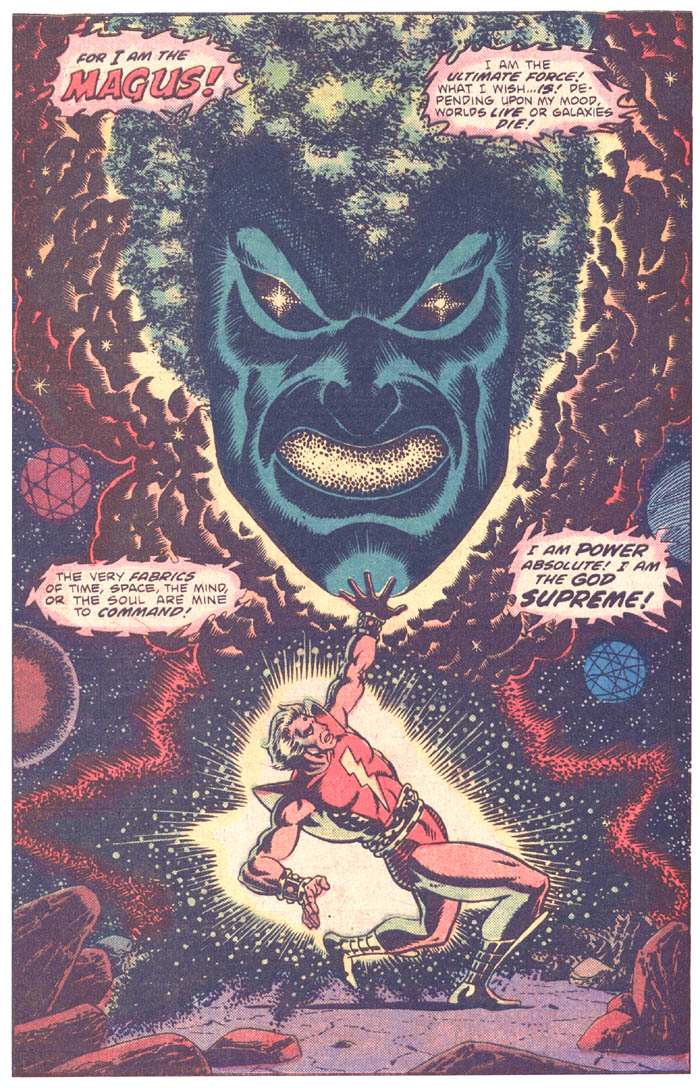 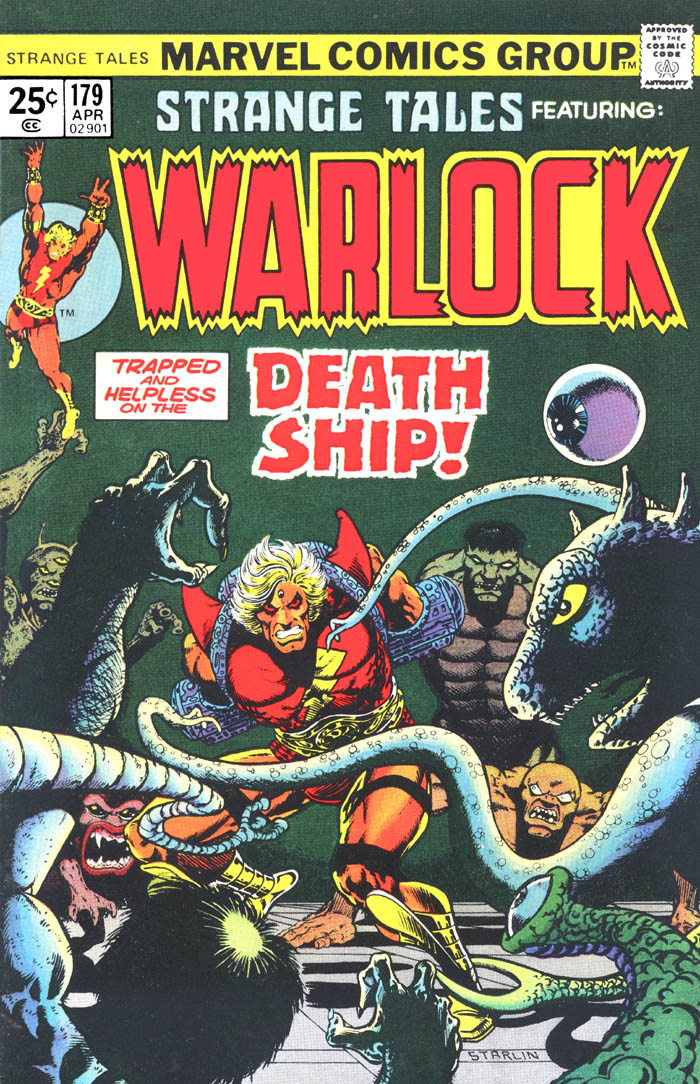 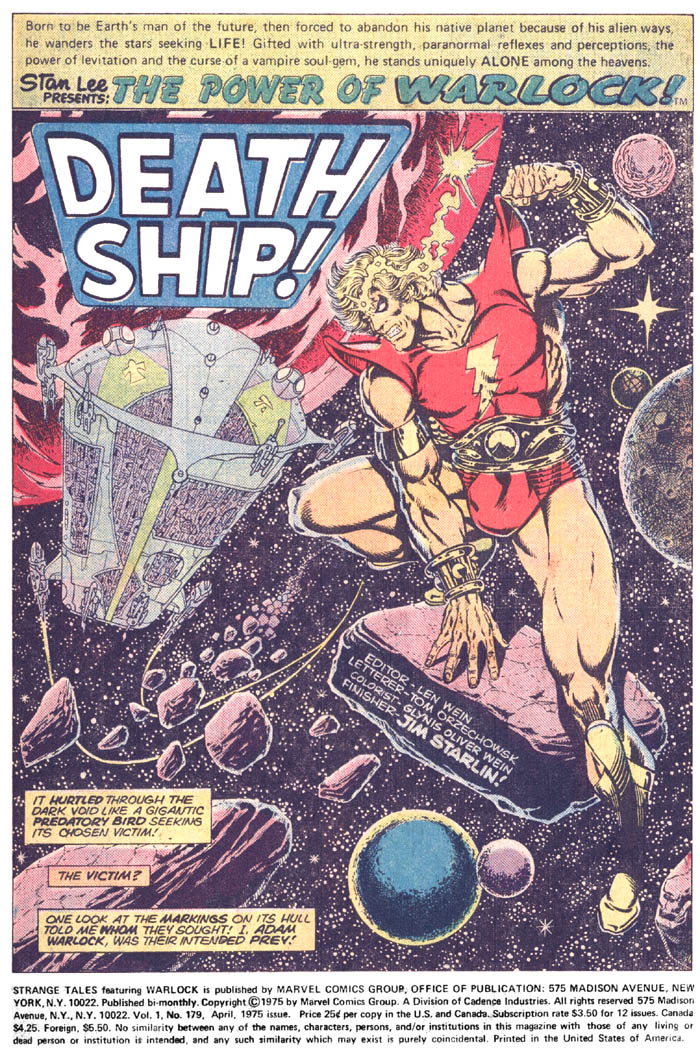 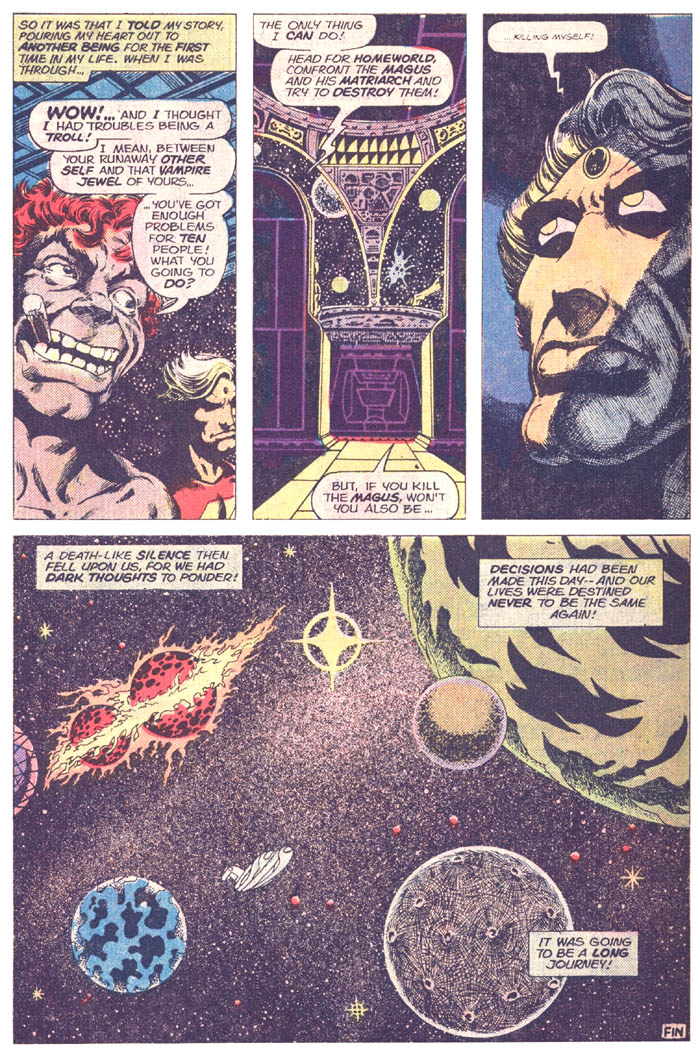 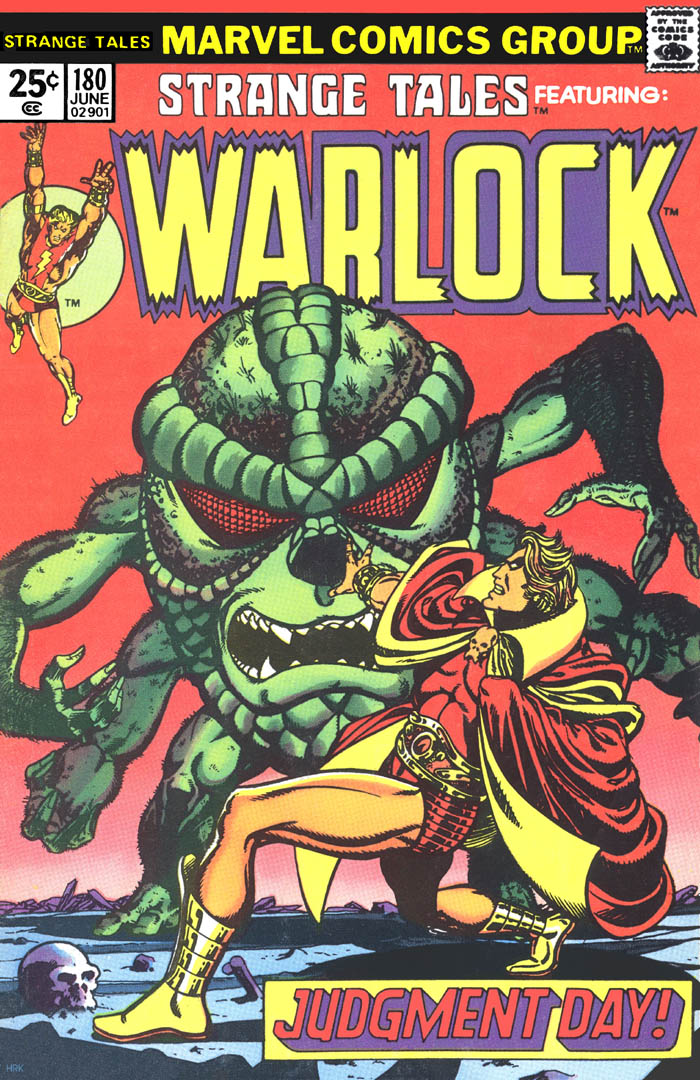 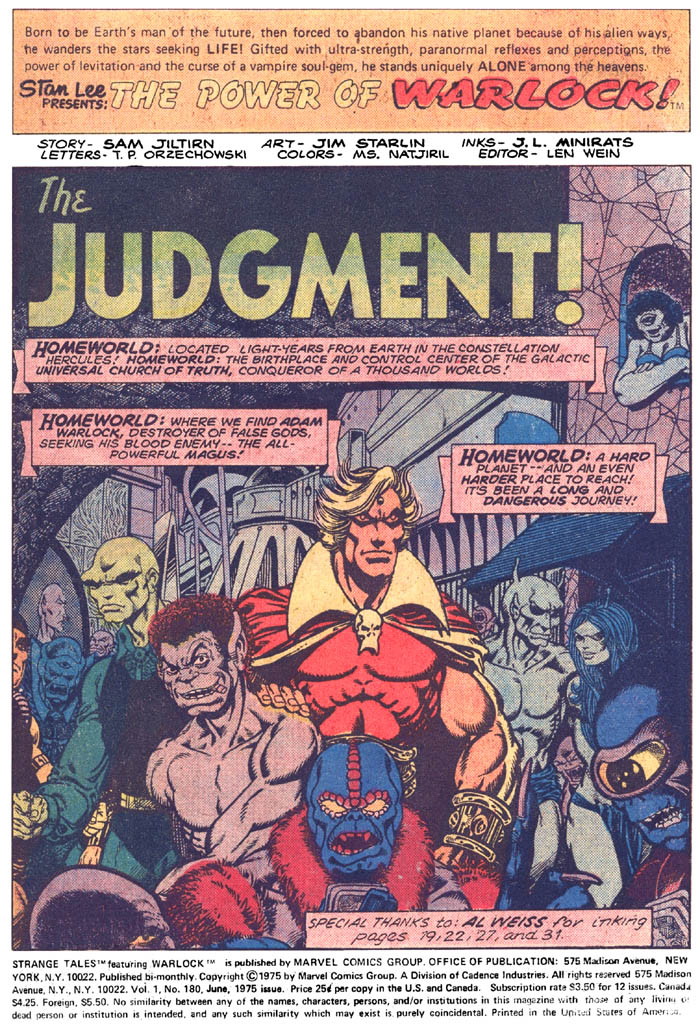 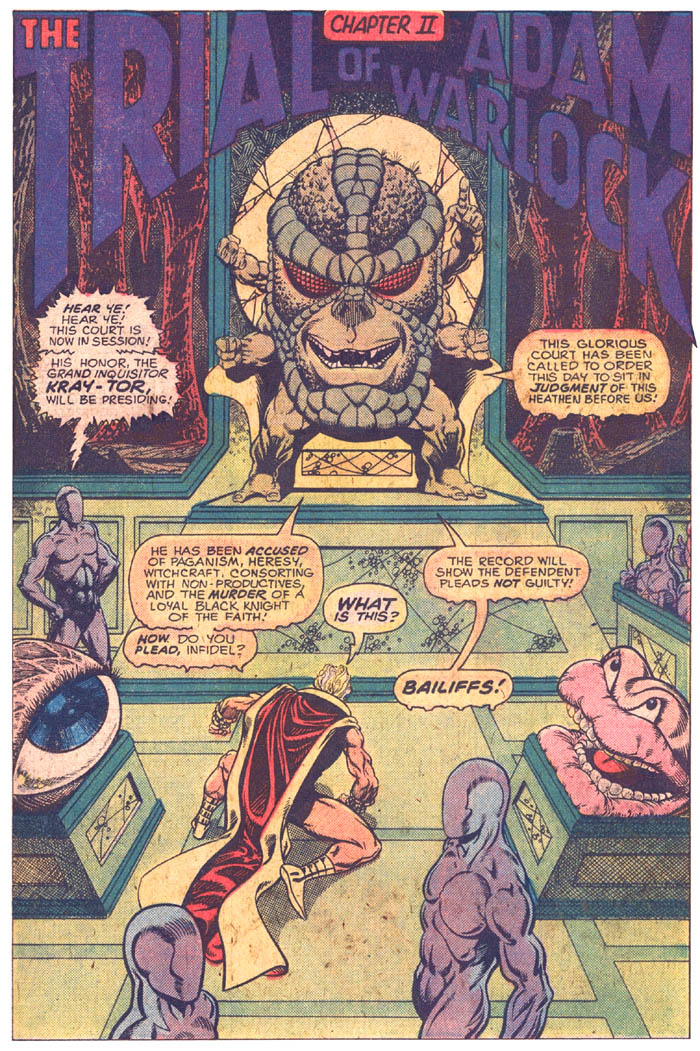 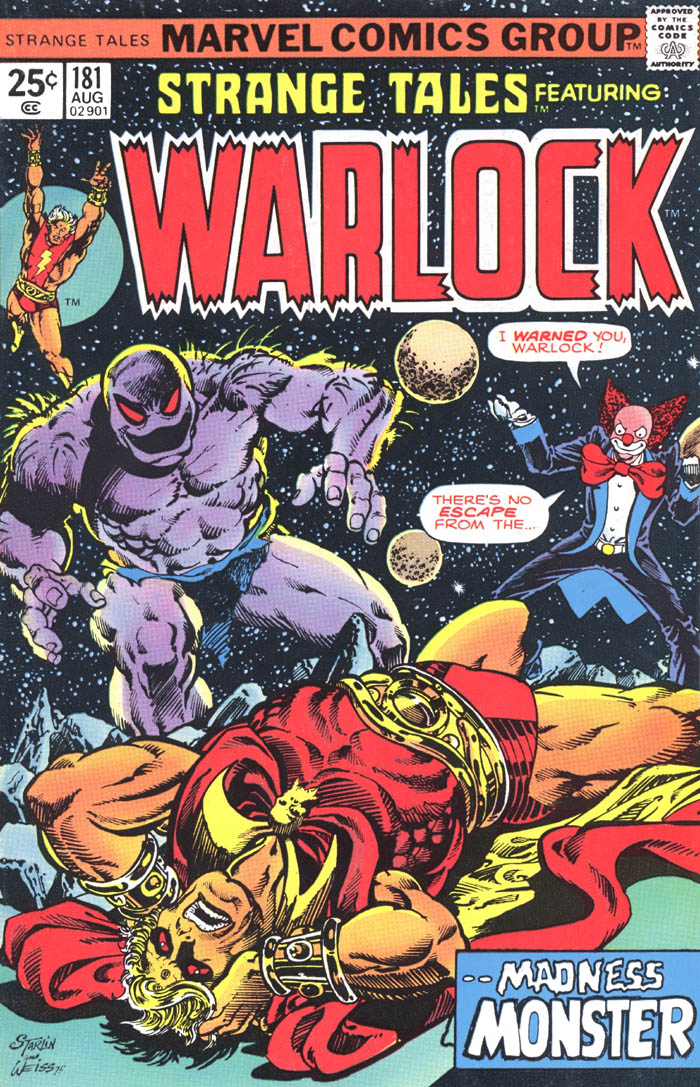 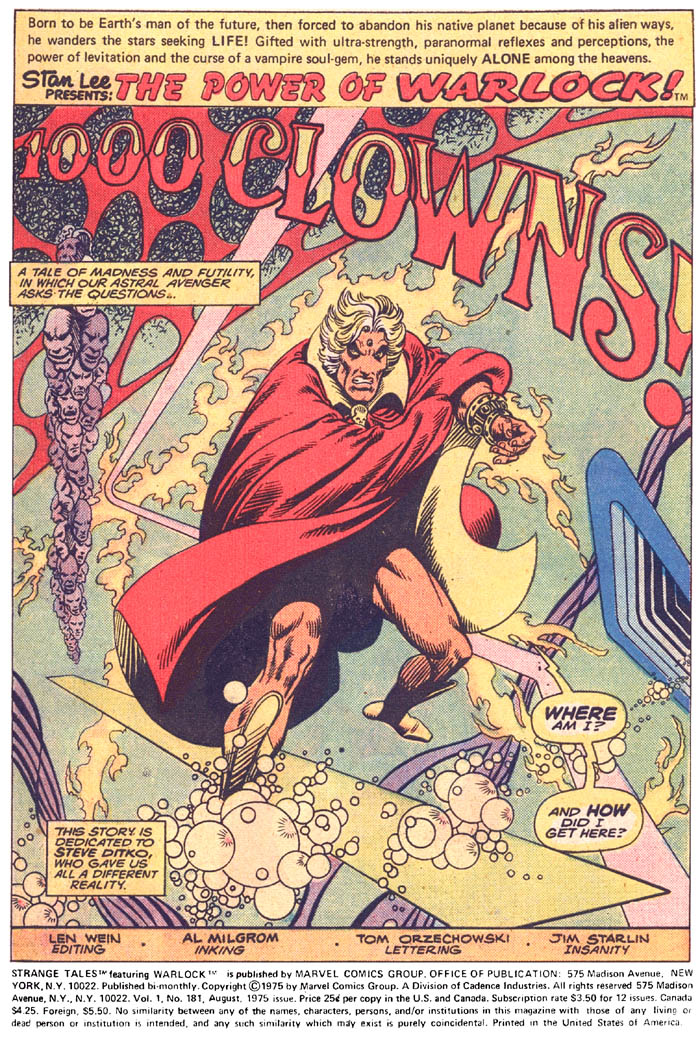 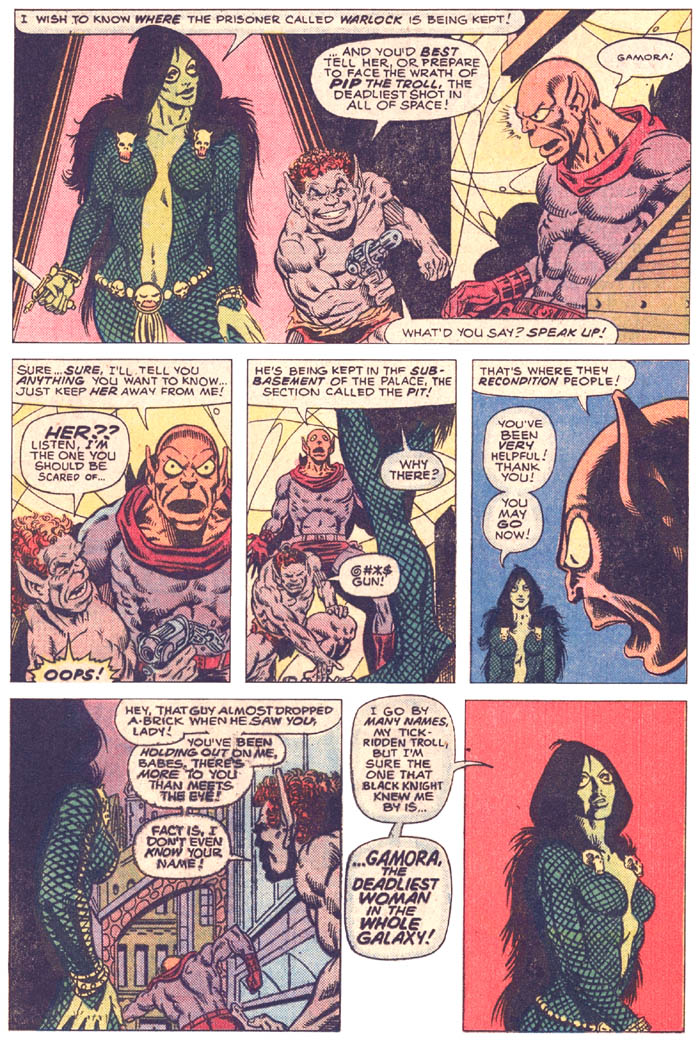 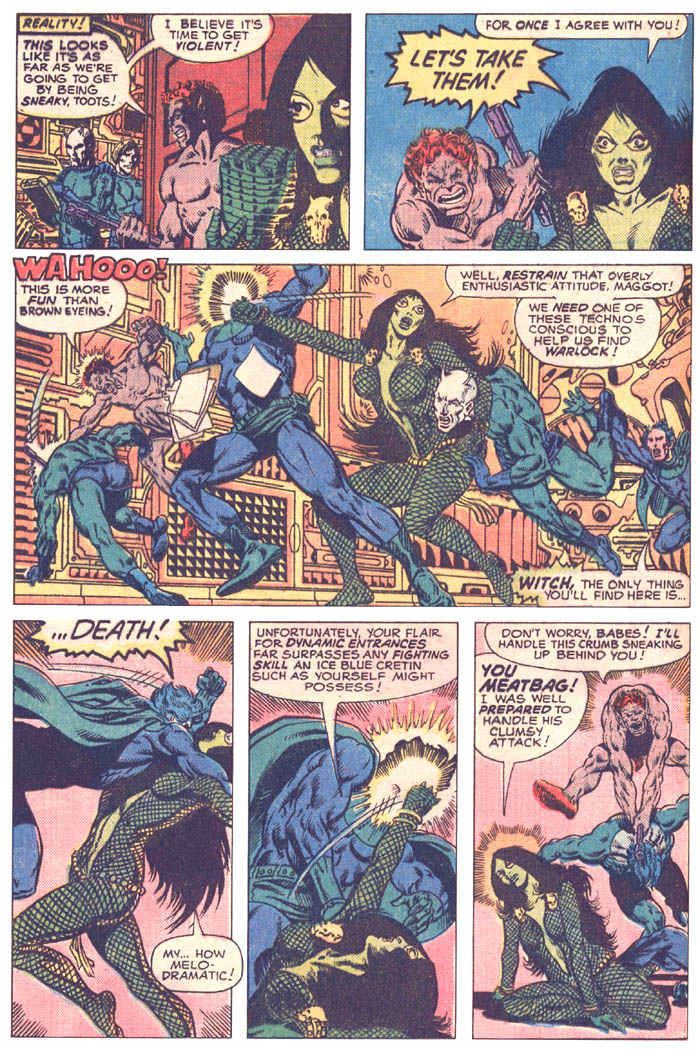 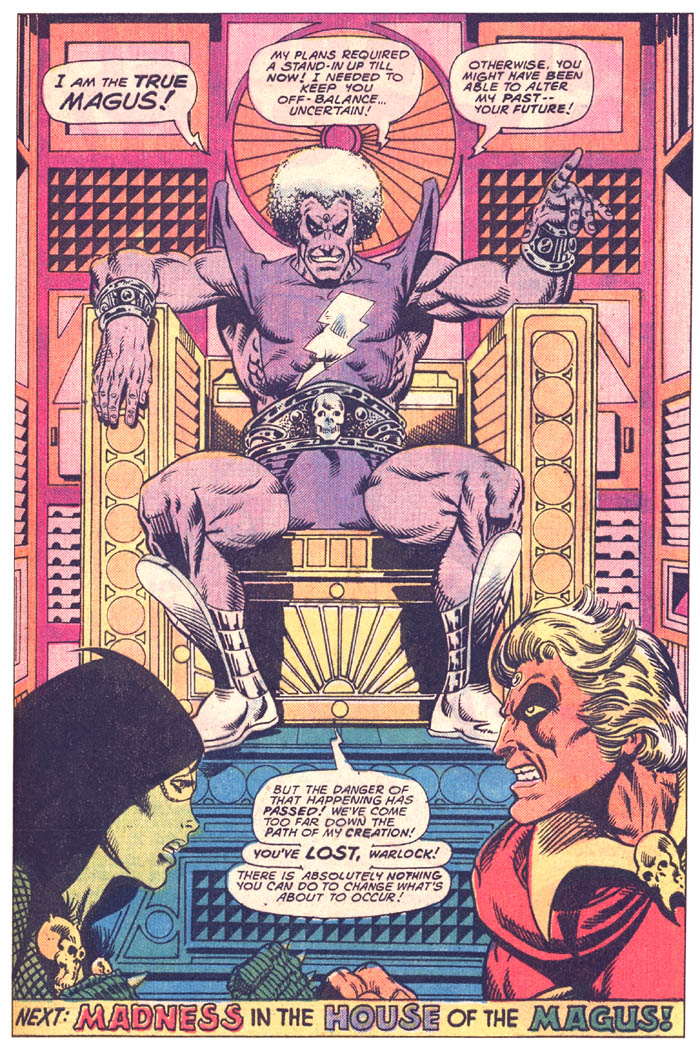