Going at least all the way back to the early 1940's, Jack Kirby had been a non-stop idea machine.  Everyone who worked with (or for) him in the 40's & 50's always had the same thing to say-- that he never ran out of ideas for characters and stories, and even found it easy to flesh out someone else's bare-bones story ideas (as happened occasionally with his partner Joe Simon).

Thus, it must have been particularly frustrating to see his editor taking full credit for stories when all he was really doing was writing (or re-writing) the dialogue, trying to give it the same "snappy" style he'd gotten used to using in countless teen humor books. Still, to any really observant readers, especially those familiar with both men's track records, it's obvious who was really doing what.

FANTASTIC FOUR was comprised of a group of diverse personalities very similar to those seen in Kirby's Newsboy Legion, BOY COMMANDOS, BOYS' RANCH and so on, while their origin, involving the crash of an aircraft they all miraculously survived, not to mention the matching uniforms (adopted with the 3rd issue), were straight out of CHALLENGERS OF THE UNKNOWN.

The early F.F. stories seem a natural outgrowth of the by-then countless "giant monster" or "alien invasion" stories Kirby had done over the previous several years. Giant monsters appeared in issues #1, 3 & 4, an alien invasion was the focus of #2, while Kirby's in-story alter-ego, Ben Grimm-- "The Thing"-- was a monster himself, who was also one of the heroes.  The Thing soon became the most popular of the group.

It may or may not have been at the suggestion of publisher Martin Goodman to include The Human Torch, as he tended to look on the original character, created by Carl Burgos, as a kind of "good luck charm".  However, more in line with the late-50's DC revivals, this "Human Torch" was an entirely different character, and a teenager to boot.

It probably seemed a natural step to then bring back another Timely hero,
Bill Everett's Prince Namor, The Sub-Mariner.  In FF #4, it was revealed he'd suffered amnesia, as a way of explaining his disappearance.  But on regaining his memory, he discovered his undersea kingdom had been destroyed, and naturally blamed the entire surface world.  In effect, Kirby returned Namor to the way he'd been when Everett first introduced him in 1939-- a violent hothead out to bring down mankind.  But as had happened before, he fell in love with a surface woman-- in this case, Sue Storm, which set up a love triangle between Sue, Namor & Reed Richards ("Mr. Fantastic", a variation on Jack Cole's Plastic Man) that would not be resolved for some time.

Hot on the heels of Prince Namor came the FF's arch enemy-- Dr. Doom,
a villain who mixed futuristic super-science with ancient trappings, his HQ an ancient castle and his costume making him look like he stepped right out of the Middle Ages.  Both Namor and Doom would return to plague the heroes many times! 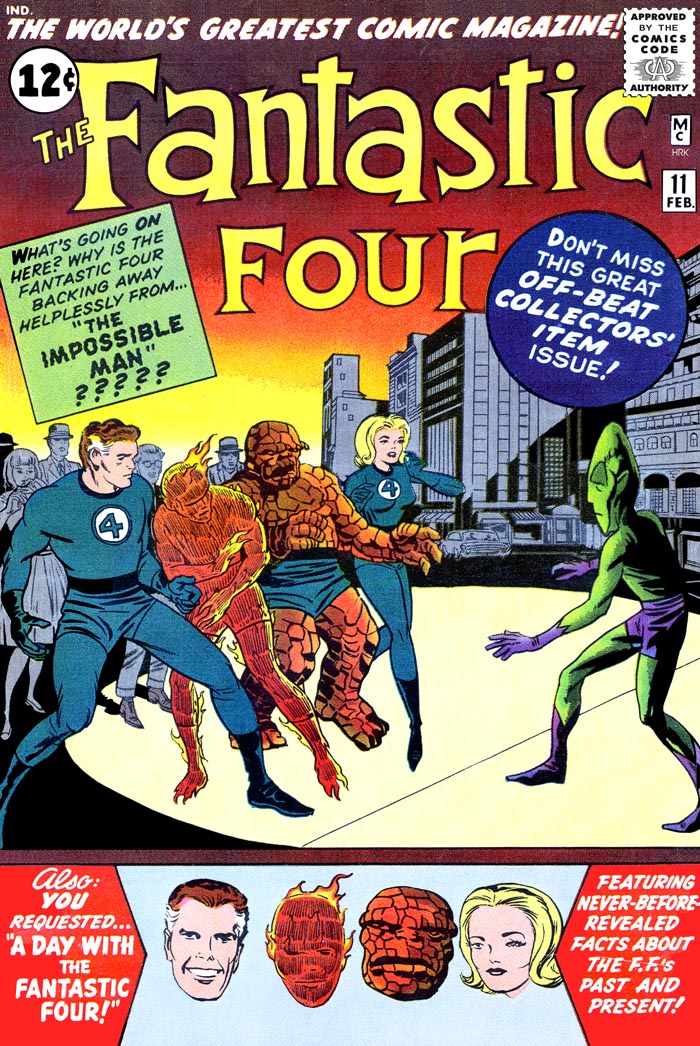 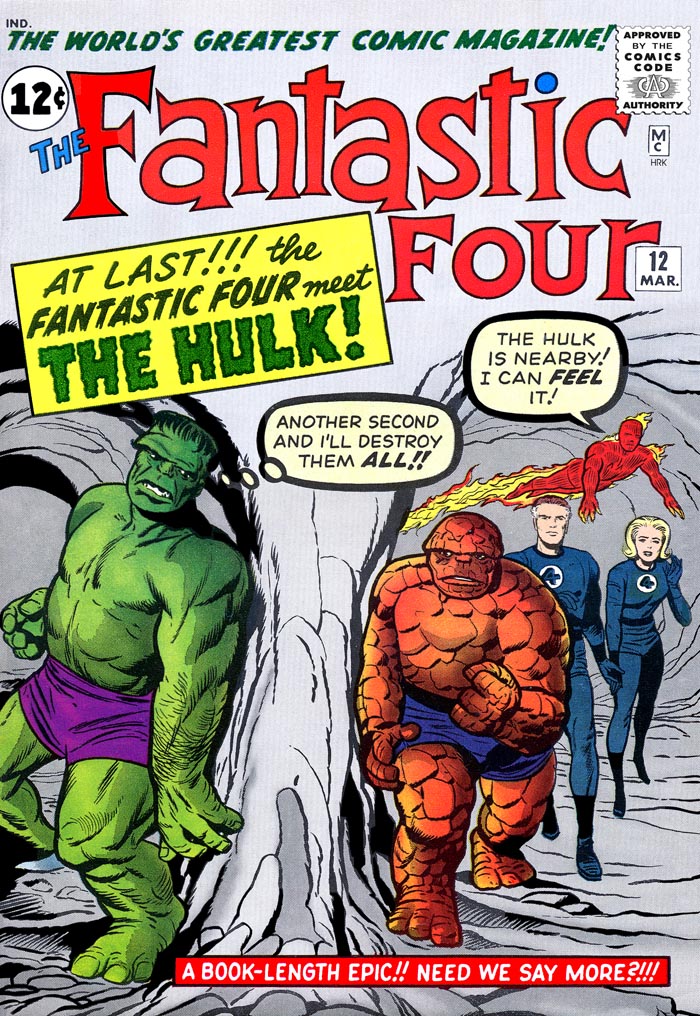 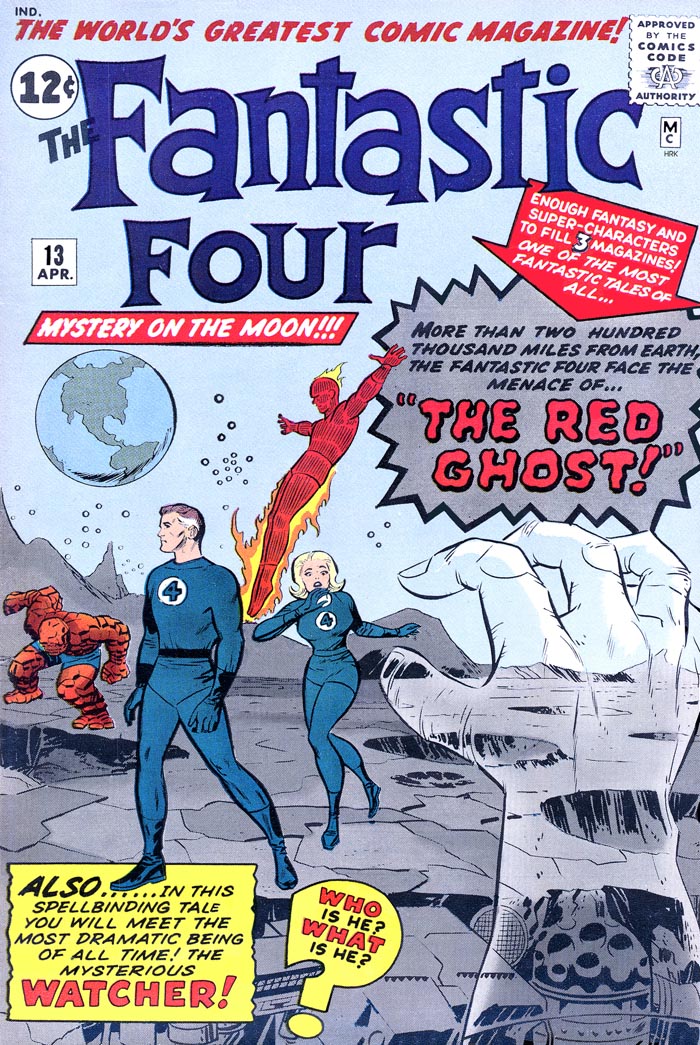 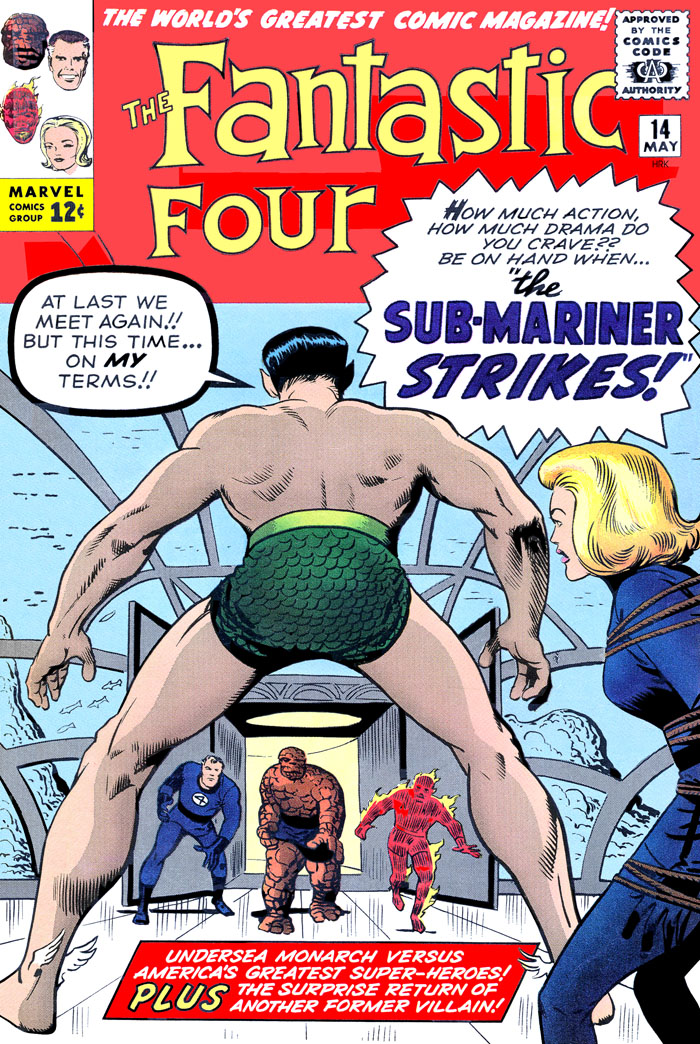 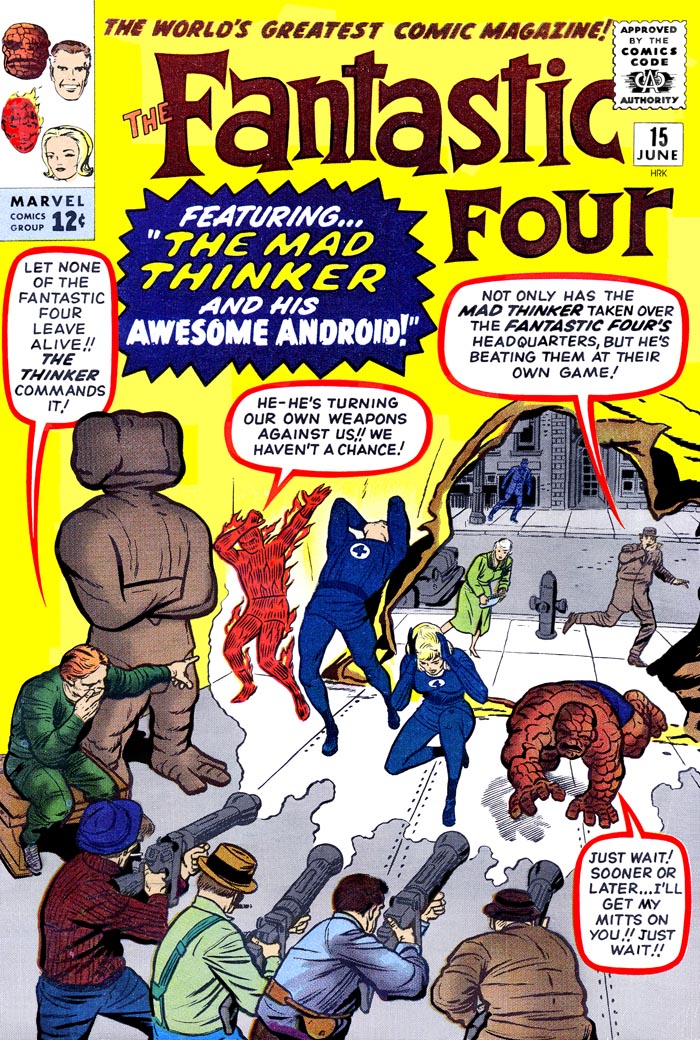 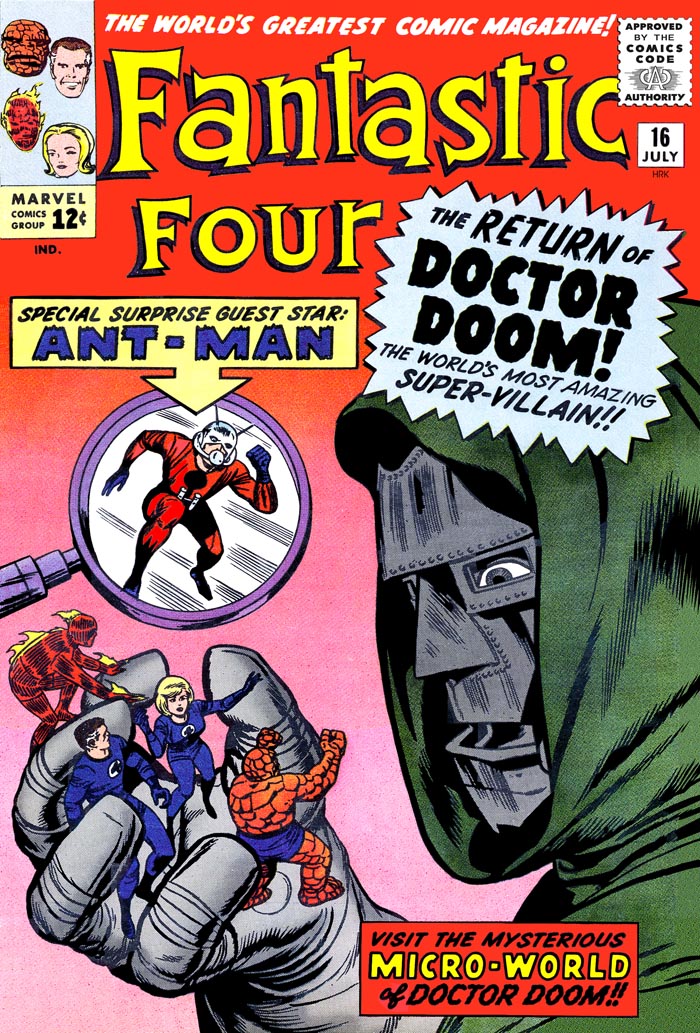 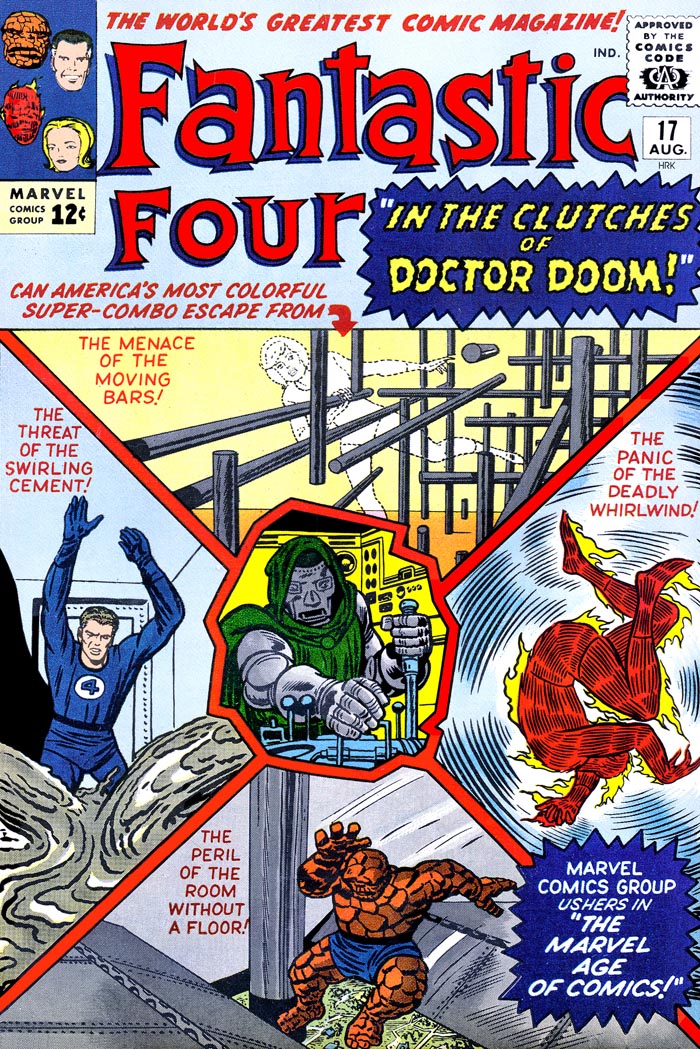 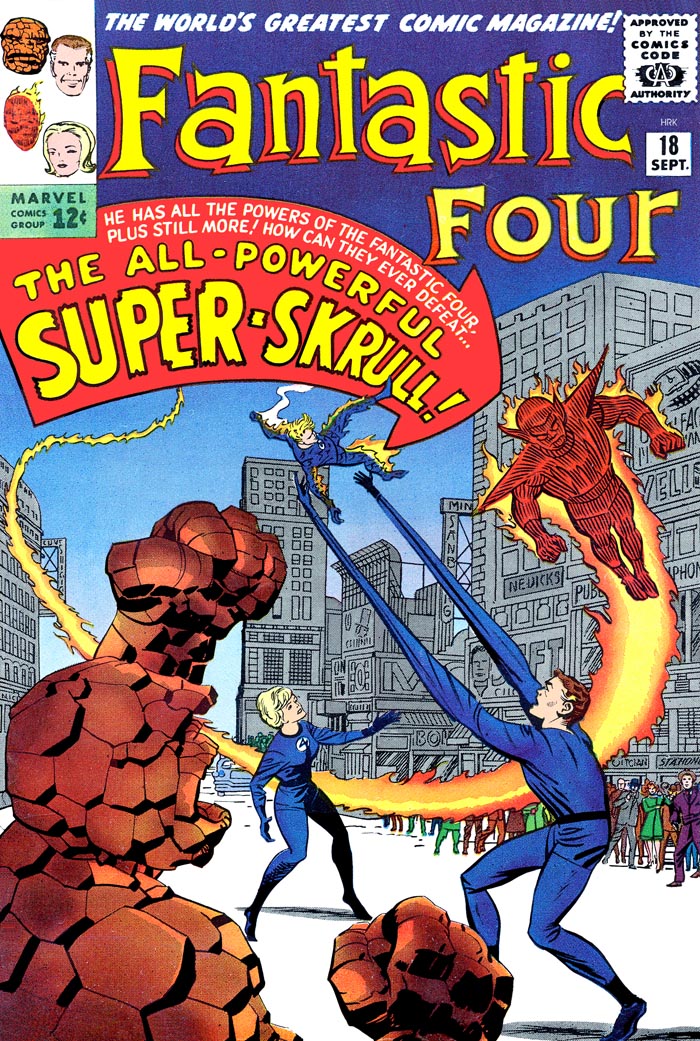 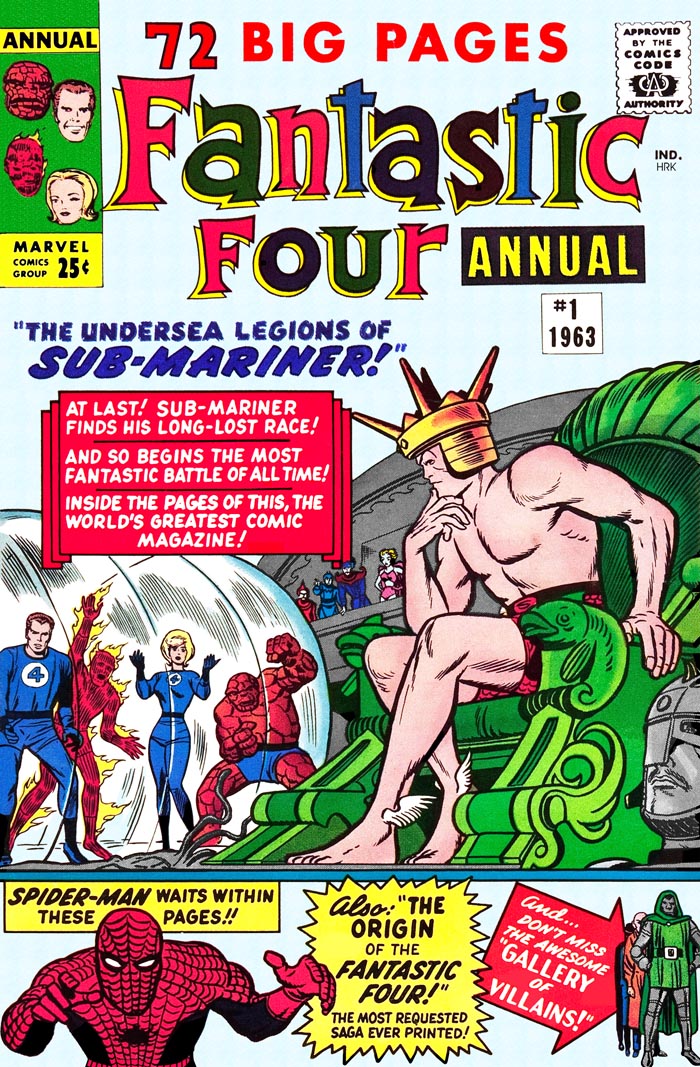 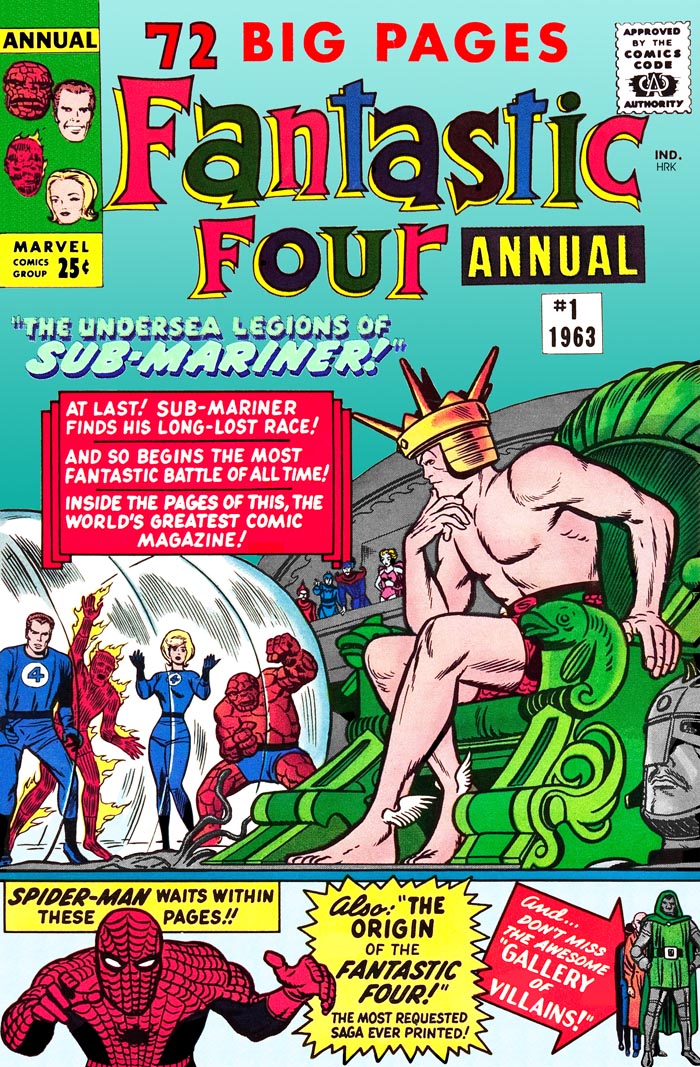 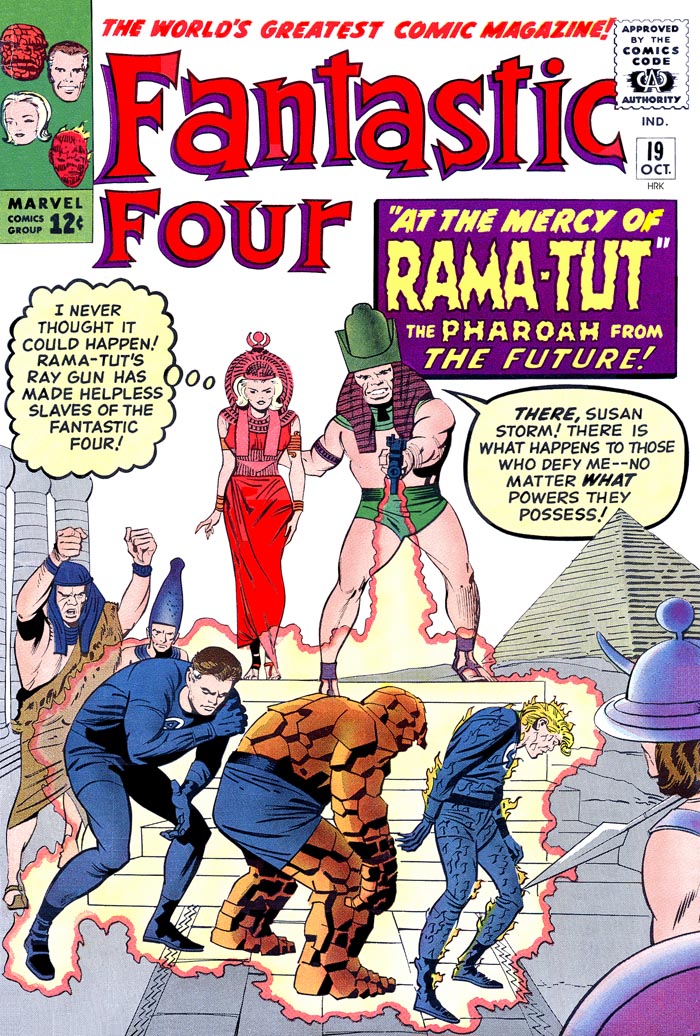 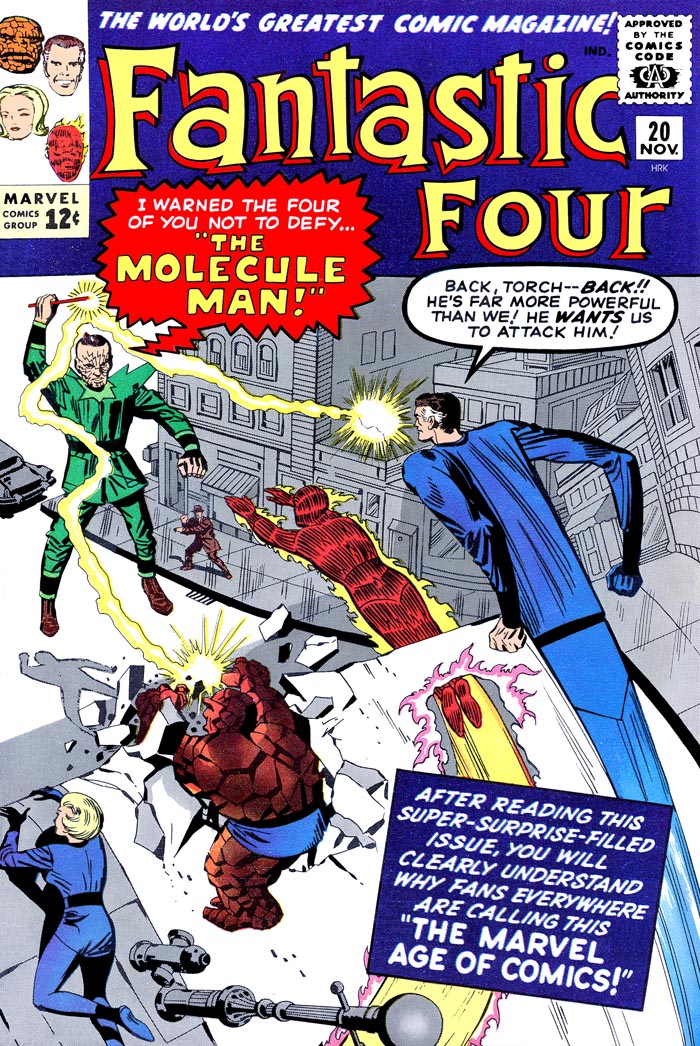