Mid-1963 was a time of great expansion in the superhero realms of The Marvel Universe. Not one but TWO brand-new team books made their debut the same month.  THE AVENGERS was the book Martin Goodman had actually wanted 2 years earlier, a team-up of existing heroes in the tradition of the Justice Society of America.  For and by contrast, THE X-MEN was closer to the tradition of Jack Kirby & Joe Simon's "kid gang" series Young Allies, Newsboy Legion, Boy Commandos and Boy Explorers, an all-new team of young heroes guided by an older mentor.

However, there was also a strange parallel between the new book, and another series that had debuted just 3 months earlier over at DC-- Arnold Drake's Doom Patrol.  Admittedly inspired by and wanting to do something in the style of FANTASTIC FOUR, Drake's series featured a team of outcasts, tragic characters brought together by "The Chief", a brilliant, crippled scientist who led the team from his wheelchair.  Compare that with THE X-MEN, mutants born with powers they sometimes couldn't control (as in the case of Cyclops) that made them feared by humanity, forced them to operate in secret, and whose leader, Professor X, also was crippled and wheel-chair bound.  Then there's the fact that both series featured recurring teams of villains, evil counterparts to the heroes.  In the case of The Doom Patrol, it was The Brotherhood Of Evil. For THE X-MEN, The Brotherhood Of Evil Mutants.  No, really.  The question of whether 2 such similar books debuting 3 months apart was just an amazing coincidence, or brought about by someone leaking information from DC to Marvel (as Drake always suspected and insisted) has never been verified one way or the other.

X-MEN was never a sales leader, which may have been due to its more-offbeat-than-usual nature, or perhaps because Jack Kirby's involvement dropped off before too long. While I often tend to think of Roy Thomas' collaboration with romance artist Werner Roth as producing the "definitive" version of the characters (indeed, decades later, actress Famke Janssen, who played Jean Grey in the X-MEN movies, was a dead ringer for Roth's version of Jean!), after a year or so the creative line-up began changing far too regularly to give the book the kind of stability that favored FANTASTIC FOUR, SPIDER-MAN or THOR.

Indeed, the book never made it to the end of the 60's. Which must have made the immense success of its mid-70's revival all the more shocking. For most of the 80's and 90's, X-MEN actually became Marvel's biggest "franchise", with more titles, spin-offs, mini-series and specials than the rest of the company's output combined. Unfortunately, success does often lead to excess... or, in this case, X-ess.  (ZING!)

While working on Nick Simon's Silver Age Marvel site, I'd found myself compelled to replace quite a few X-MEN covers, as the ones he had posted were among the worst at the entire site. I hadn't realized how many I'd done until today, when, after finally doing a restoration of X-MEN #1, I figured this would be a good time to set up a gallery for the series. (On the other hand, if you really wanna see some AWFUL cover scans, check out the same run of covers at the GCD... though I don't reccomend it!)  According to my records, the first issue has been reprinted 25 times (so far).  But here's the original cover, lovingly restored in all its (quickly-knocked-out) glory.  ENJOY! 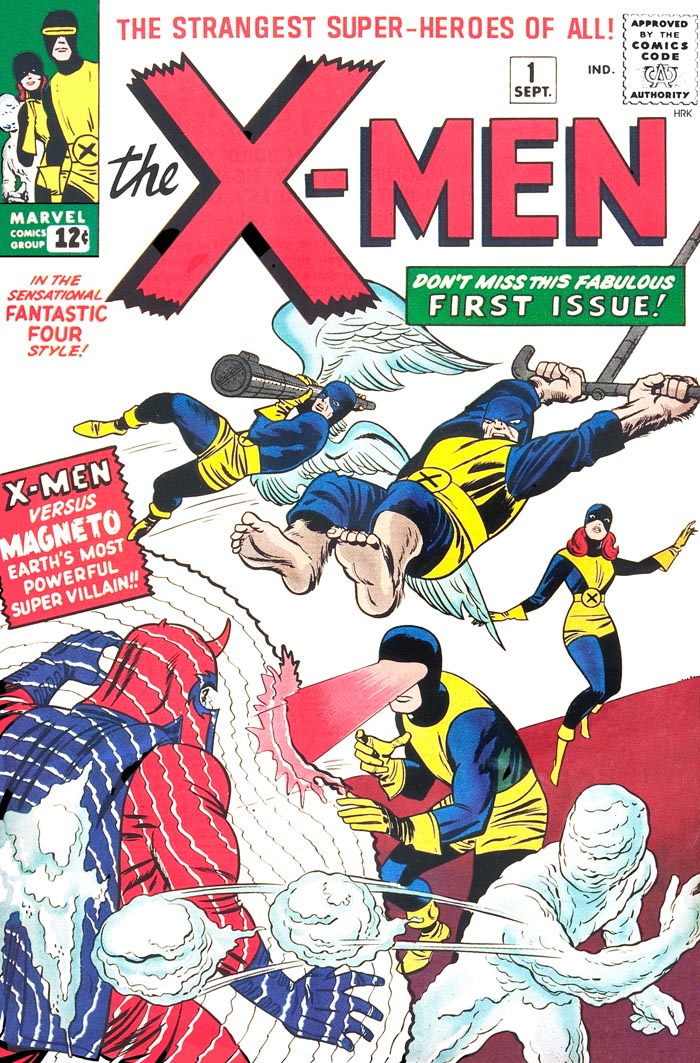 As with dozens of others, the dark blues on this came in SO dark, it was almost impossible to see them.  By copying them onto a separate layer and adjusting "color balance", saturating them with both bue and cyan, it gives the picture a much richer look. Something I found a bit surprising was the green on Cyclops' costume. Was this a mistake? I decided no, since green is the opposite color of red, and Stan Goldberg (who colored this) probably intended for it to be a "shadow" tone caused by the RED laser blast. (I bet it's not like that on any reprints.) 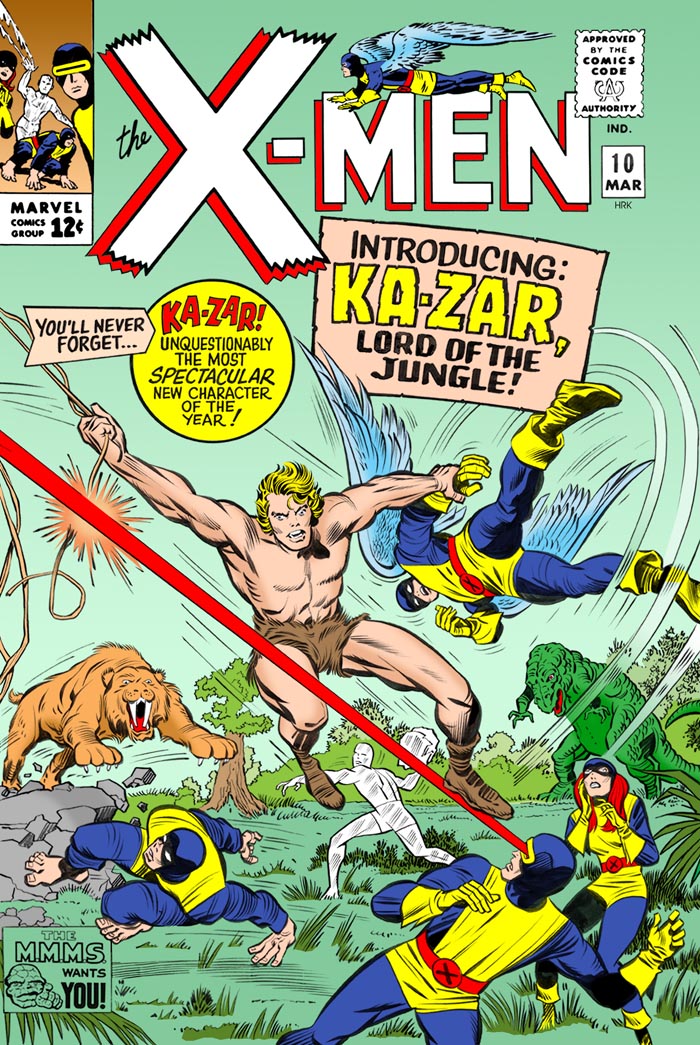 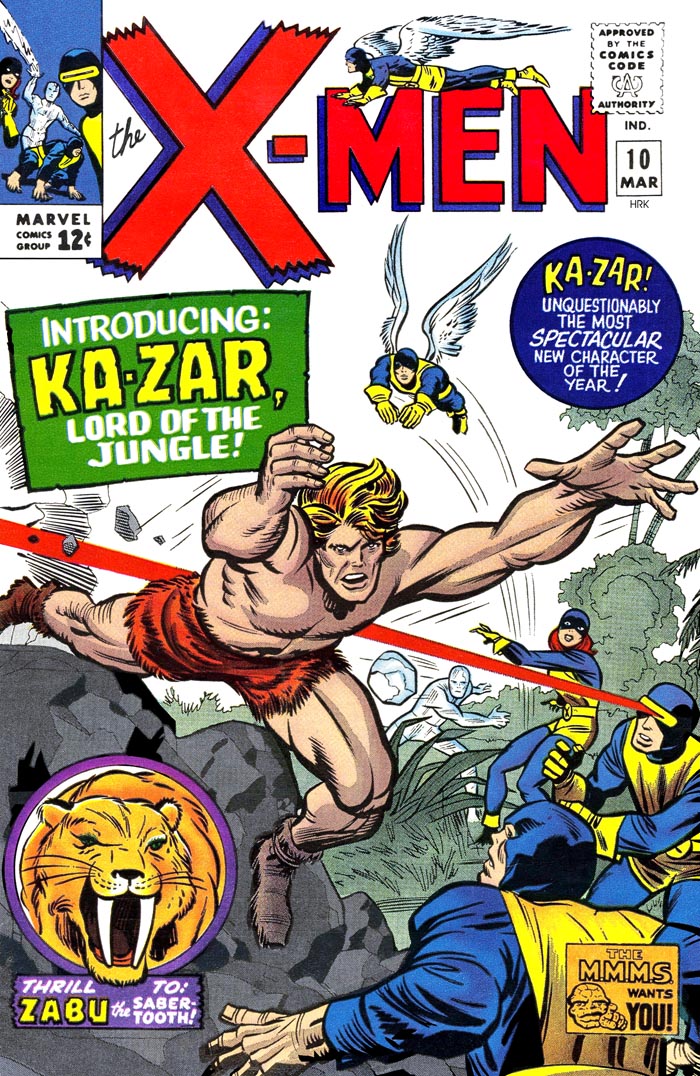 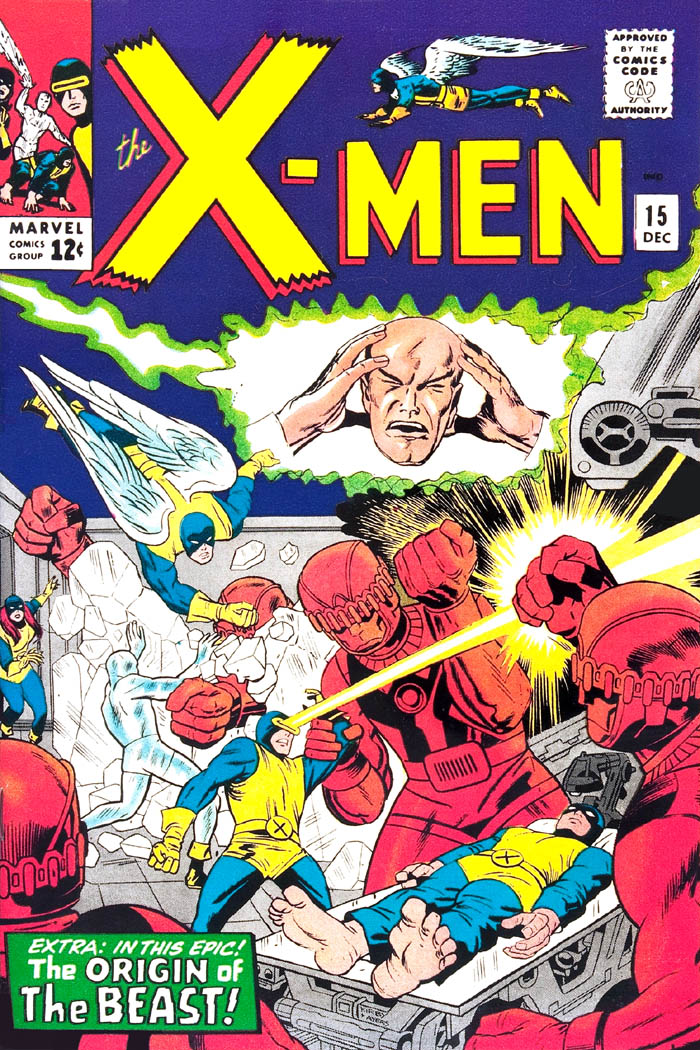 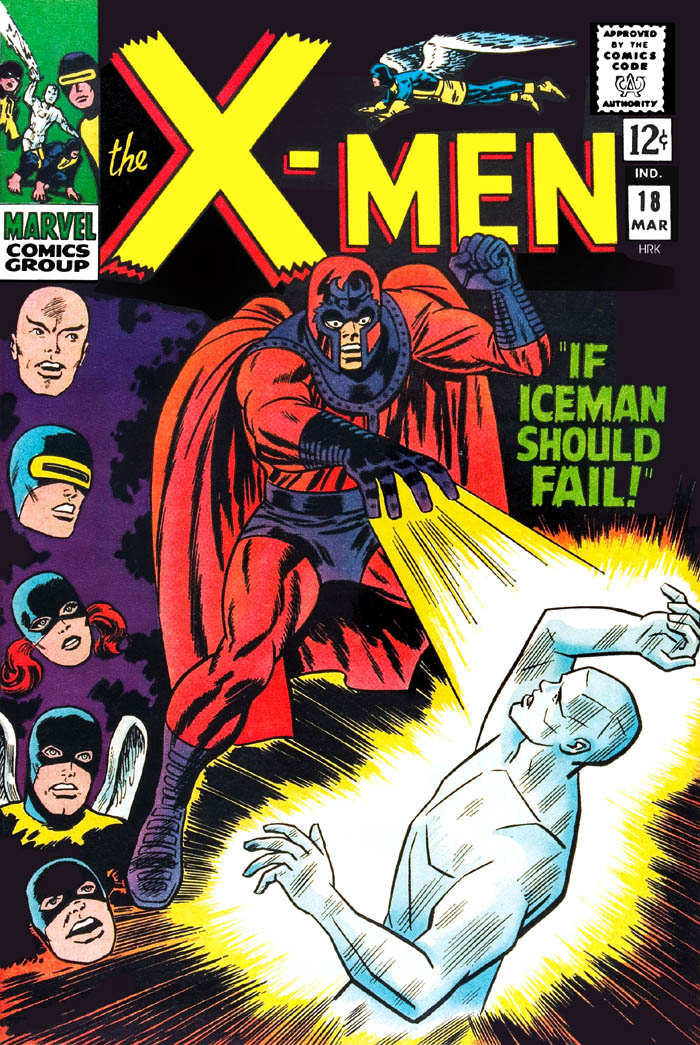 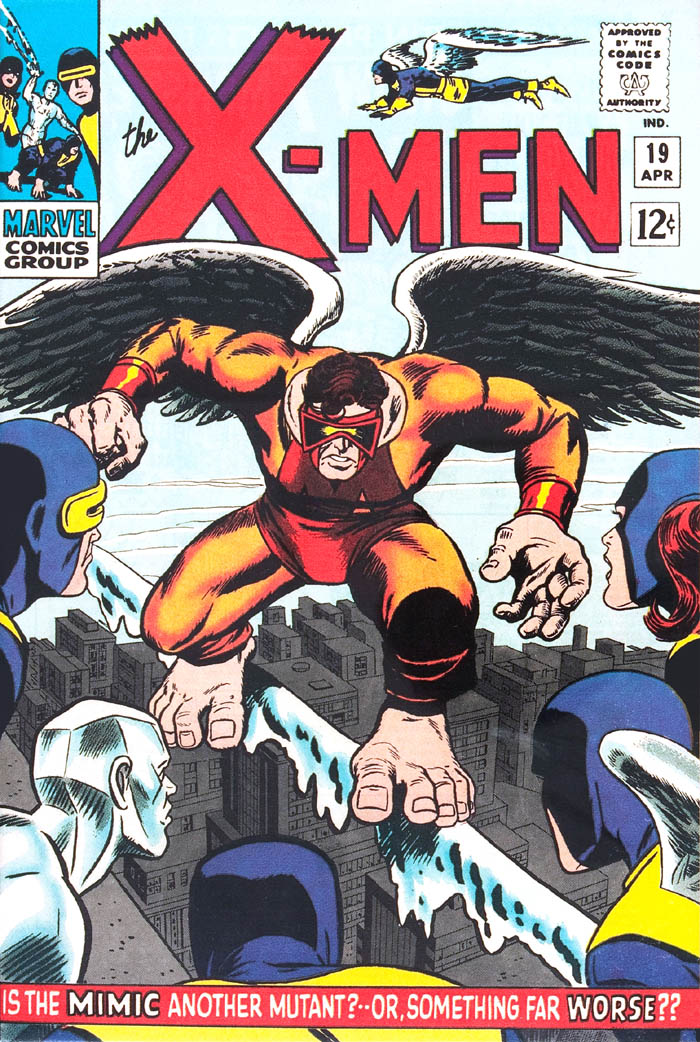 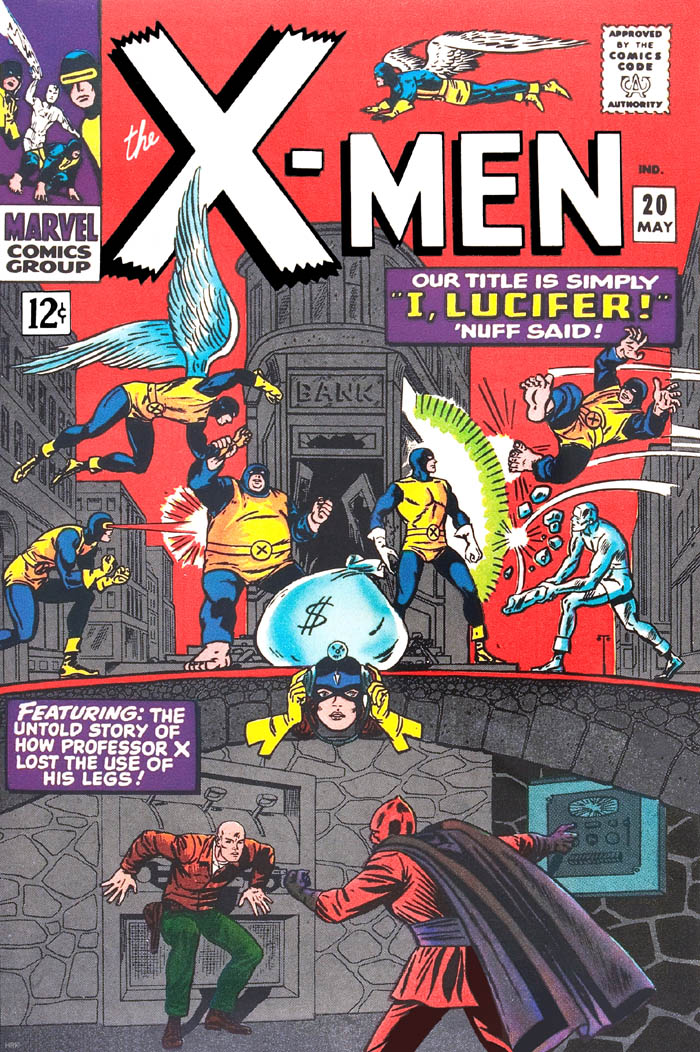 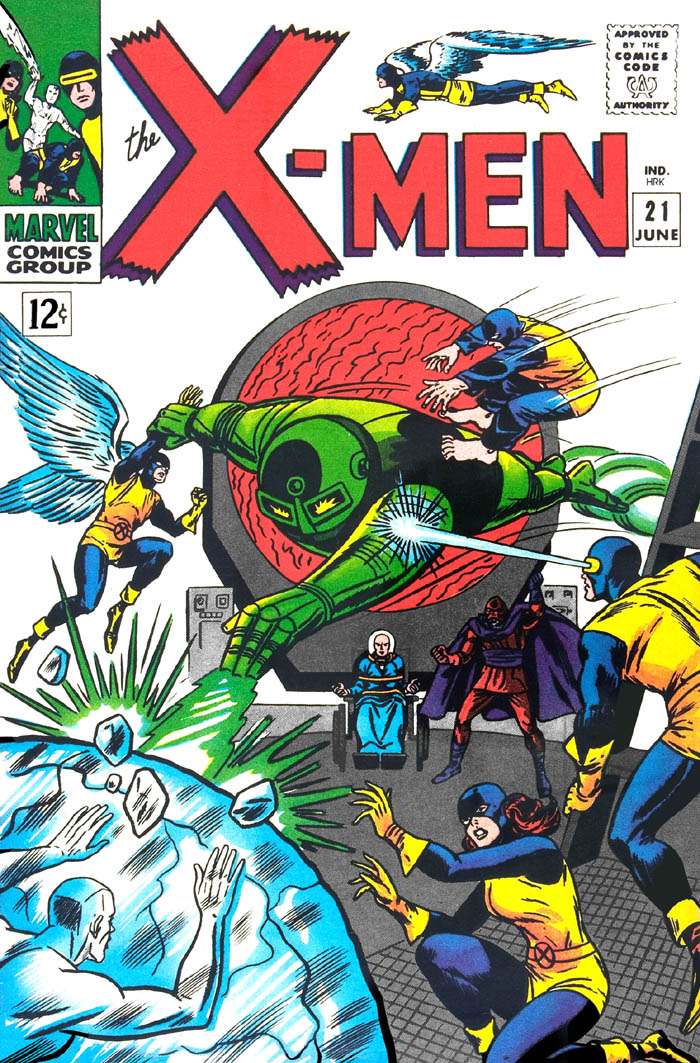 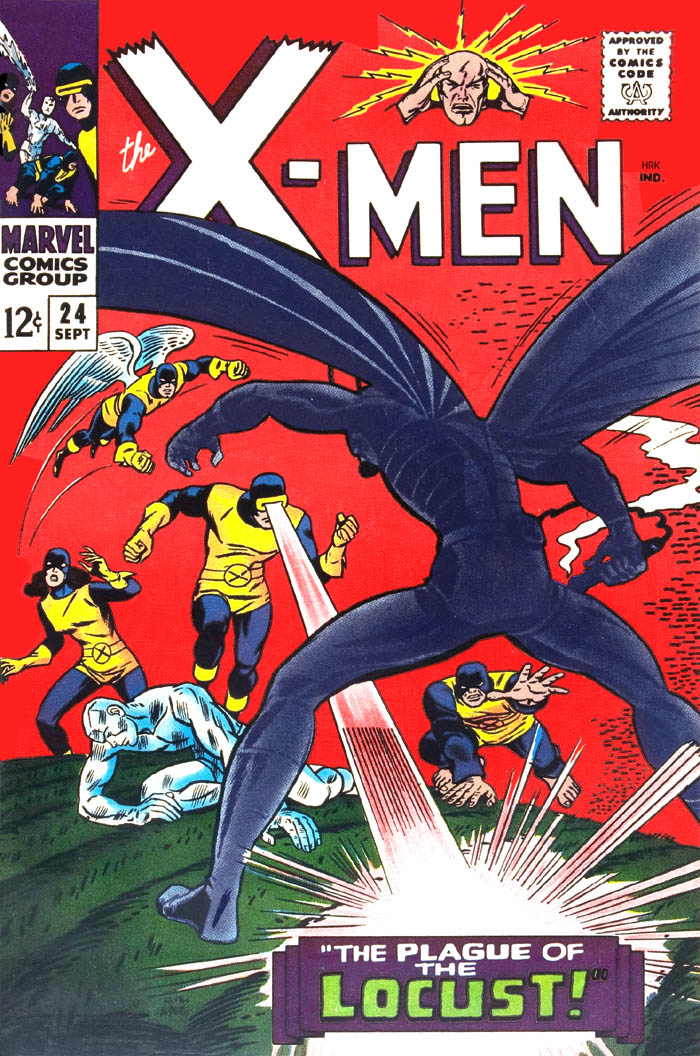 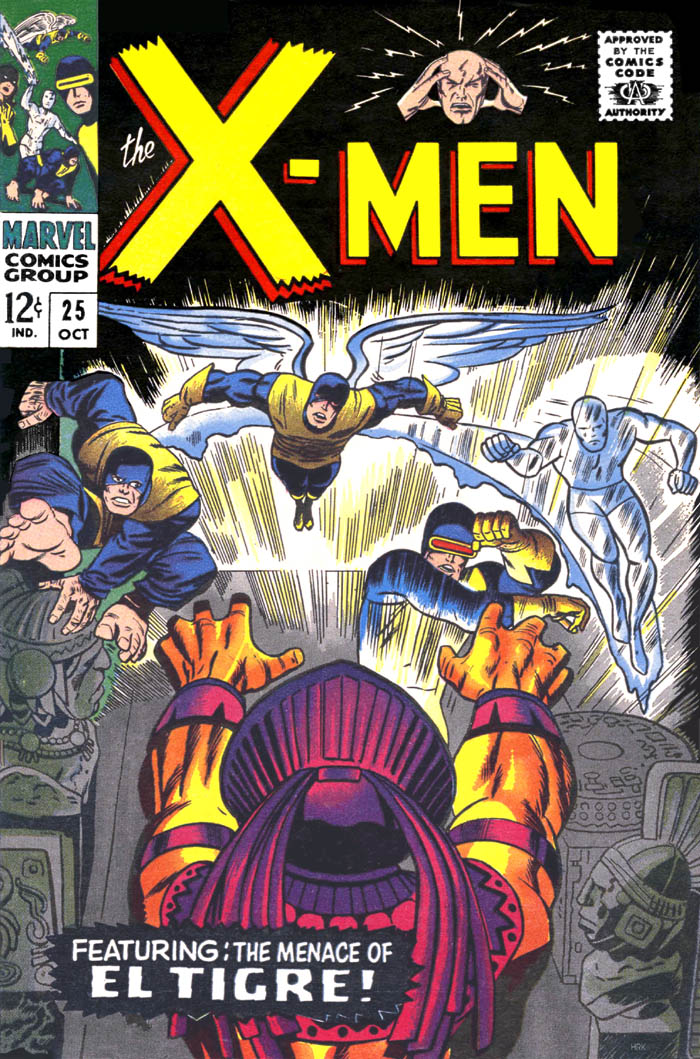 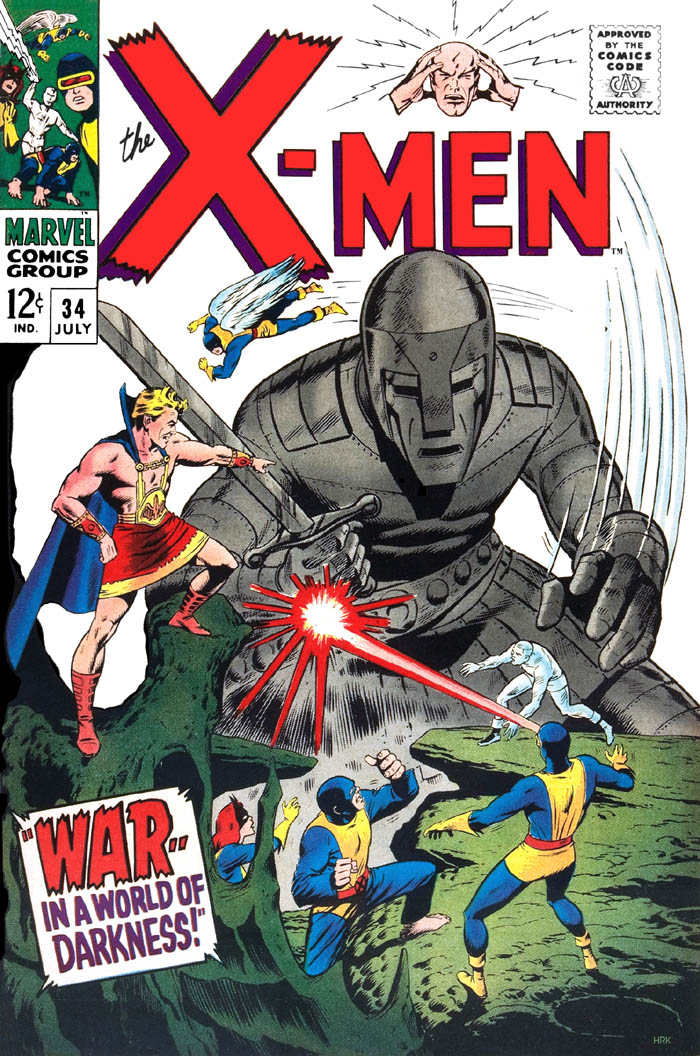 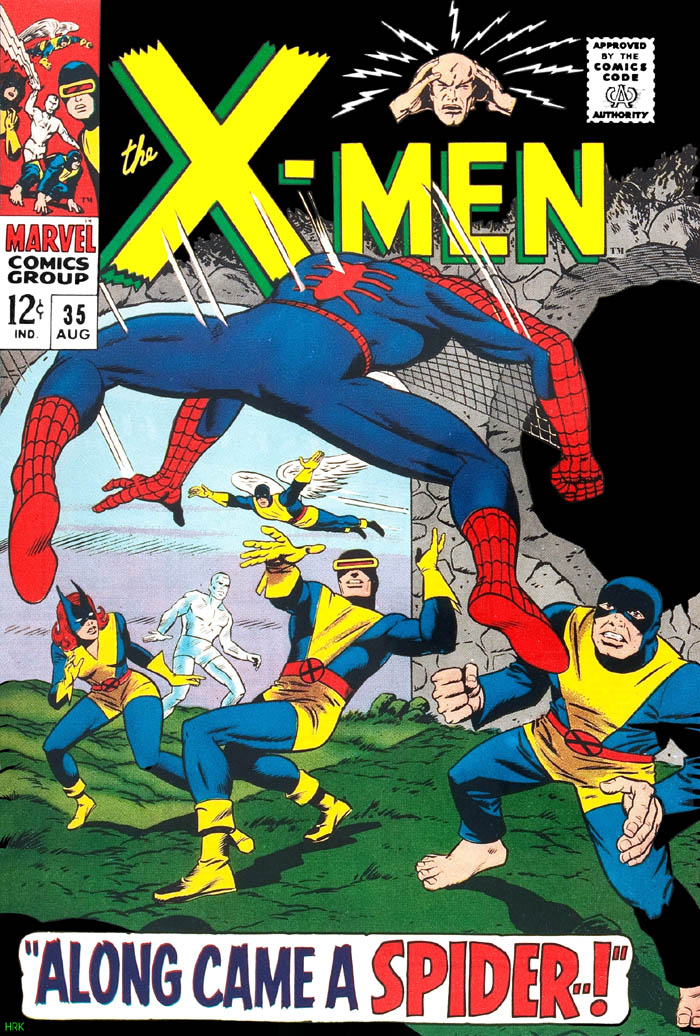 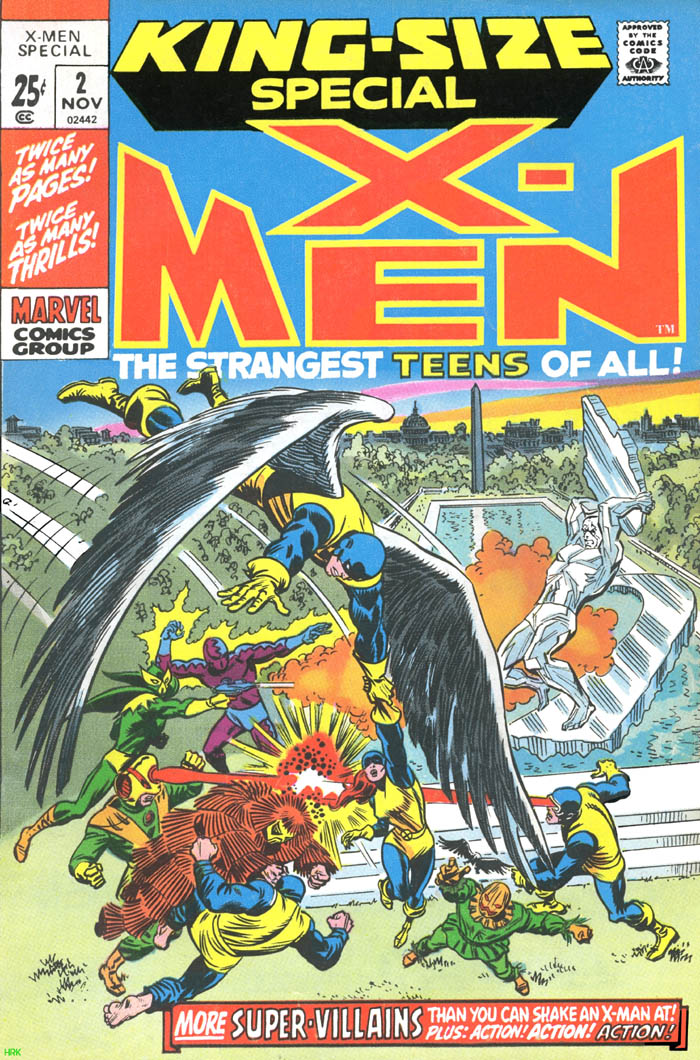 This was actually the first X-MEN comic I ever owned, and contains
reprints of issues #22-23.