Martin Goodman always felt The Human Torch (a misnomer as he was an android) was a "good luck charm", as when he decided to have HT on the cover of MARVEL COMICS #1 instead of Sub-Mariner, it became a hit.  After that, he insisted on The Human Torch (or, at least, A Human Torch) being in most of his anthologies.  When it was decided to start doing superheroes again in 1961, sure enough, one of the FANTASTIC FOUR was "The Human Torch"-- although, this time, like DC's late-50's superhero "revivals" (Flash, Green Lantern, etc.), it was an entirely new version of the character-- and this time, he actually was a human being, in the form of Johnny Storm, "kid brother" of Sue Storm, The Invisible Girl.

Success breeds excess, so Goodman decided to spin-off one of the members of the F.F. into his own series.  If you've noticed a pattern here, it should be no surprise it was Johnny Storm, The Human Torch!

Now, over the years, it's become habitual for most Marvel fans to belittle and look down their noses at this spin-off series. Sure, it's never rises to the creative or artistic heights of its parent book, or even THE INCREDIBLE HULK for that matter.  But I have to say, ever since the entire series was collected in ESSENTIAL HUMAN TORCH Vol.1 (and only, heh), it's had a special place in my heart.  Why? Well... it's FUN!

There's basically 3 periods of the run.  The first has stories & art by Jack Kirby, inks by Dick Ayers, and dialogue by Larry Lieber.  There's a certain continuity here, for not only did Kirby & Ayers both work together on the F.F., but back in the 1950's, Ayers did full art on the 50's revival of the original HUMAN TORCH.  I must say at this point, that having read a sampling of the original character's stories, both from the 40's and the 50's, not one of them (NOT ONE!!!) has really impressed me.  Not so Johnny Storm's stories.  Now, it's been said they're a lot like what you might have gotten if Kirby was still working for DC... well, all I have to say about that is, even at DC, Kirby was STILL better than most of the guys they had working for them.  Put another way, Johnny's solo stories may not be as good as F.F. stories, but they STILL manage to be better than, say, SUPERBOY stories.

The 2nd part of the run has stories & art by Dick Ayers.  And again, while his stuff may not be as imaginative as Kirby's, they make up for it by being MORE FUN.  I think it helps if you picture Johnny's stories as being like a TV sitcom, where the main character just happens to have super-powers.

The 3rd part of the run saw Ayers replaced by Bob Powell, and an ever-rotating roster of writers & inkers.  For whatever reason, Powell, a real star in his own right in the 1950's, NEVER seemed to fit in at Marvel.  Maybe it was because he didn't like doing his own stories, which was something editor Stan Lee insisted on.  Had it been the early 70's (or even late 60's), there might have been a place for him (even as there was for George Tuska and Jim Mooney).  Ah well.  Powell was around a long time, and his period at Marvel amounts to little more than an ill-advised blip.  In 1966, he did some really classic art, when he was teamed with painter Norm Saunders on the BATMAN bubble-gum cards!

Anyway, this has been more long-winded than usual for me (at least, at this blog).  So, here we go, lovingly, painstakingly restored, are the early STRANGE TALES covers featuring Johnny Storm.  Enjoy! 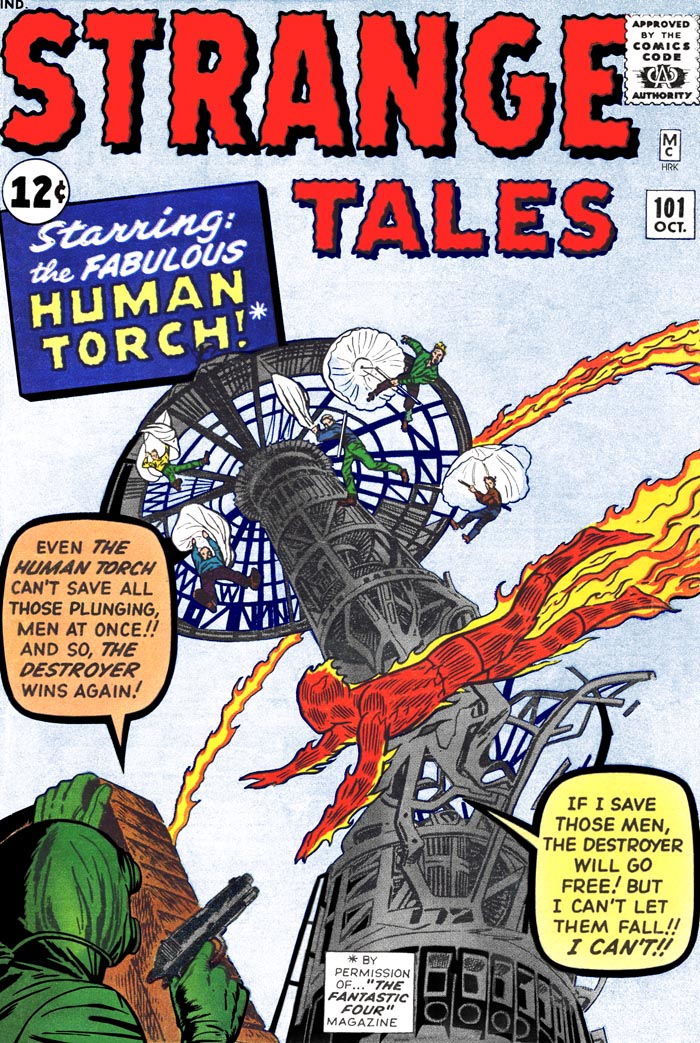 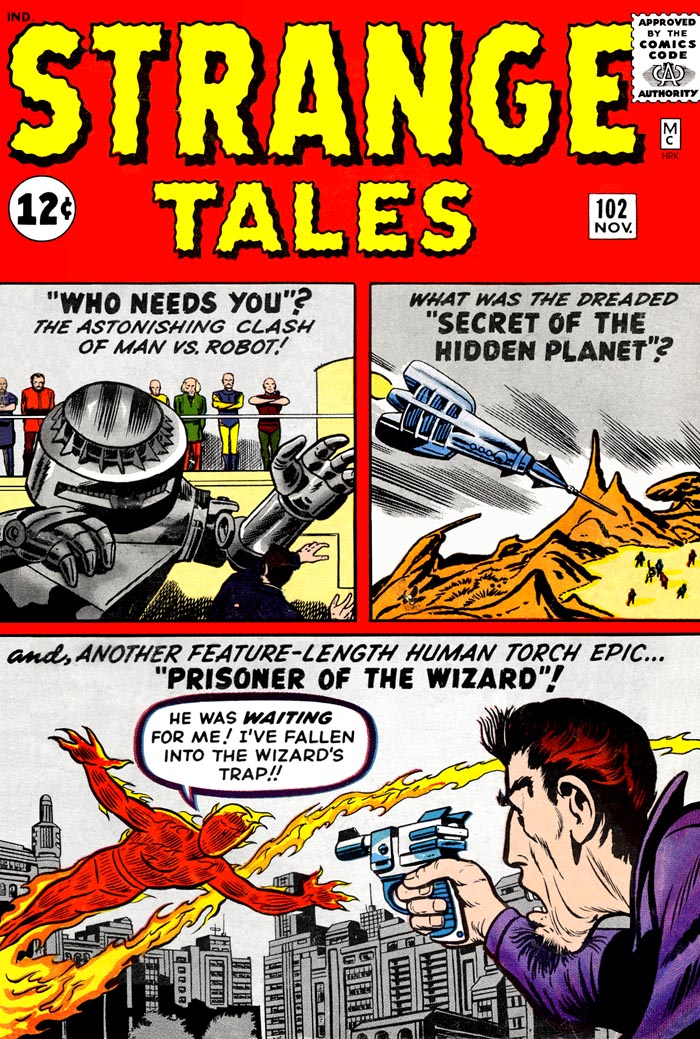 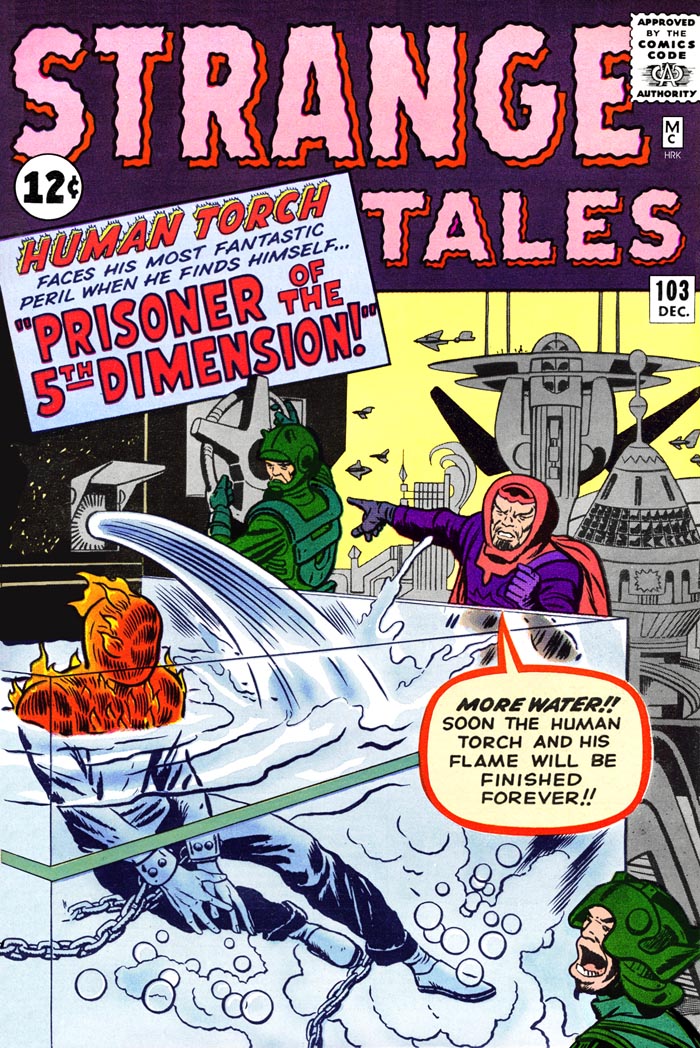 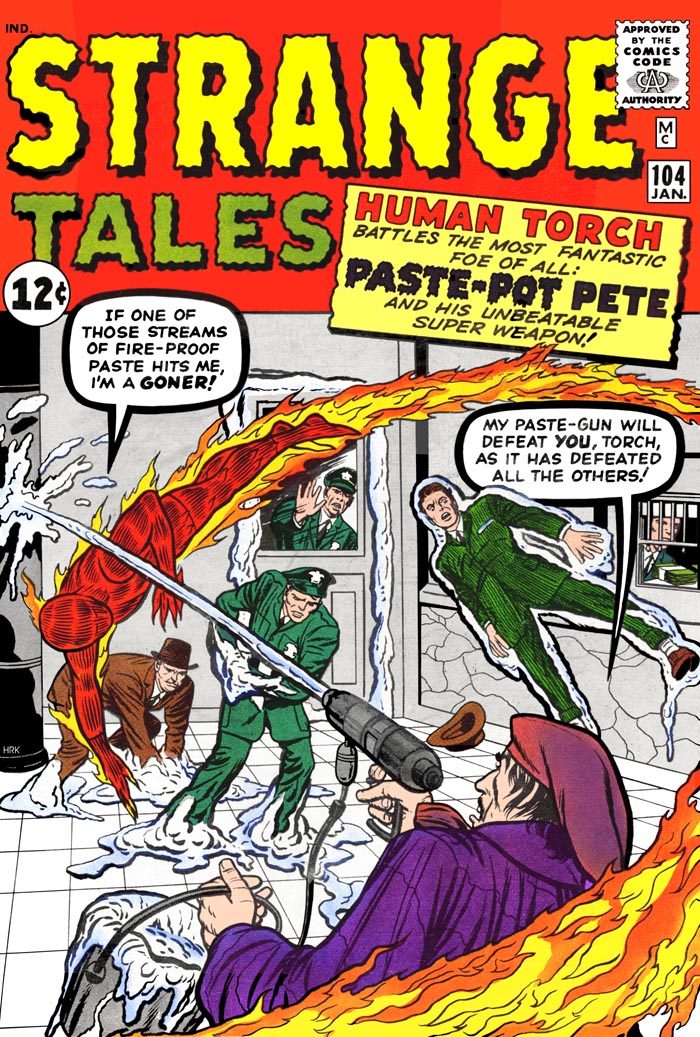 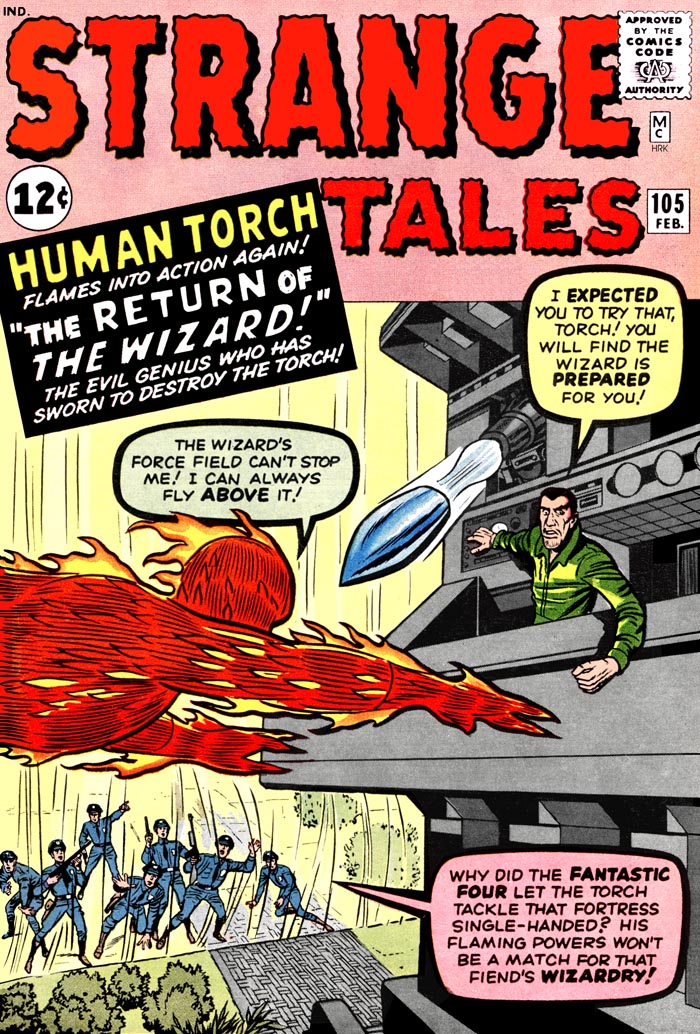 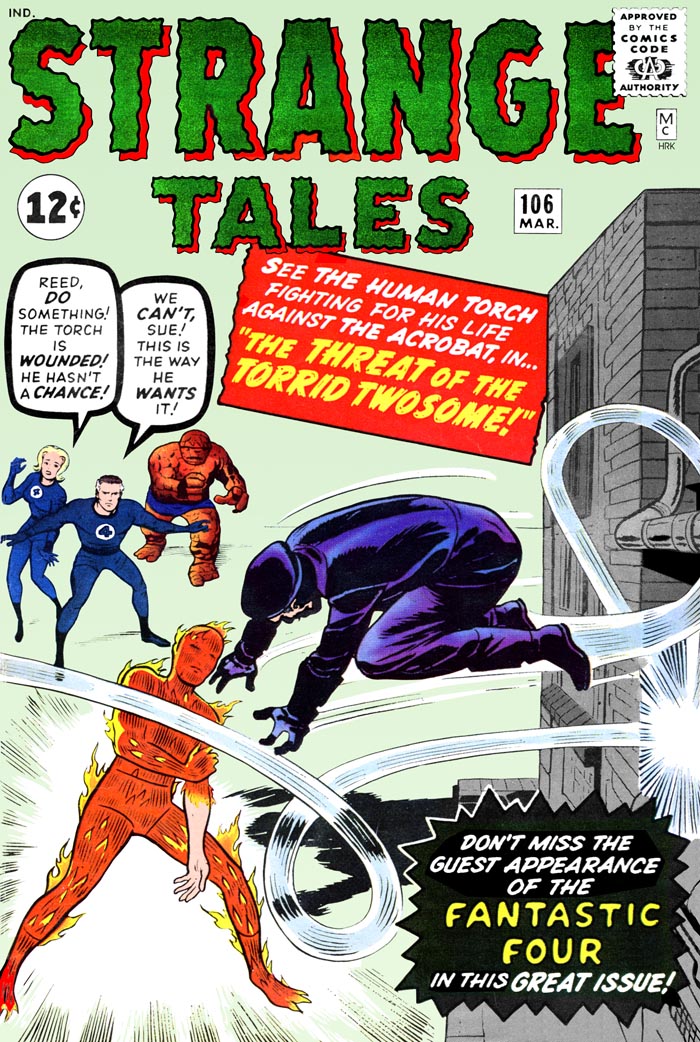 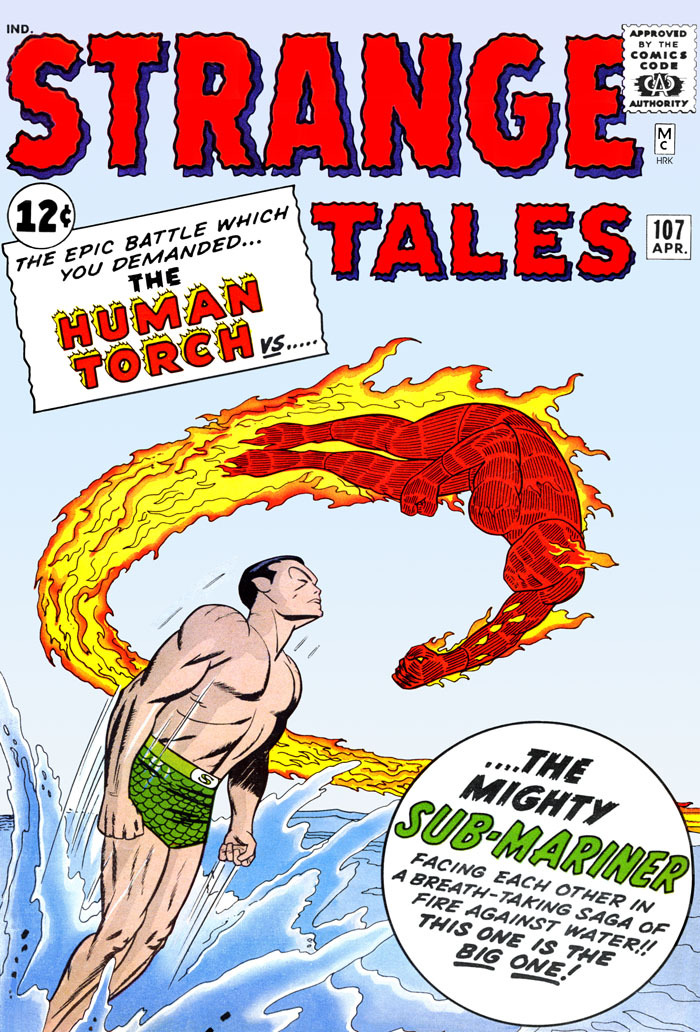 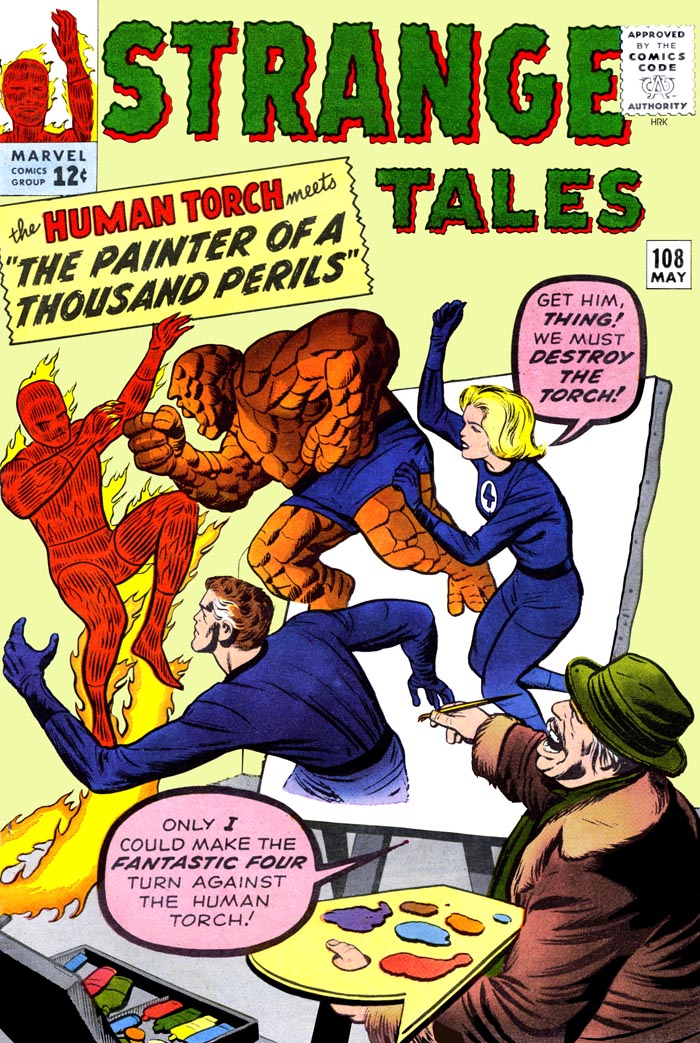 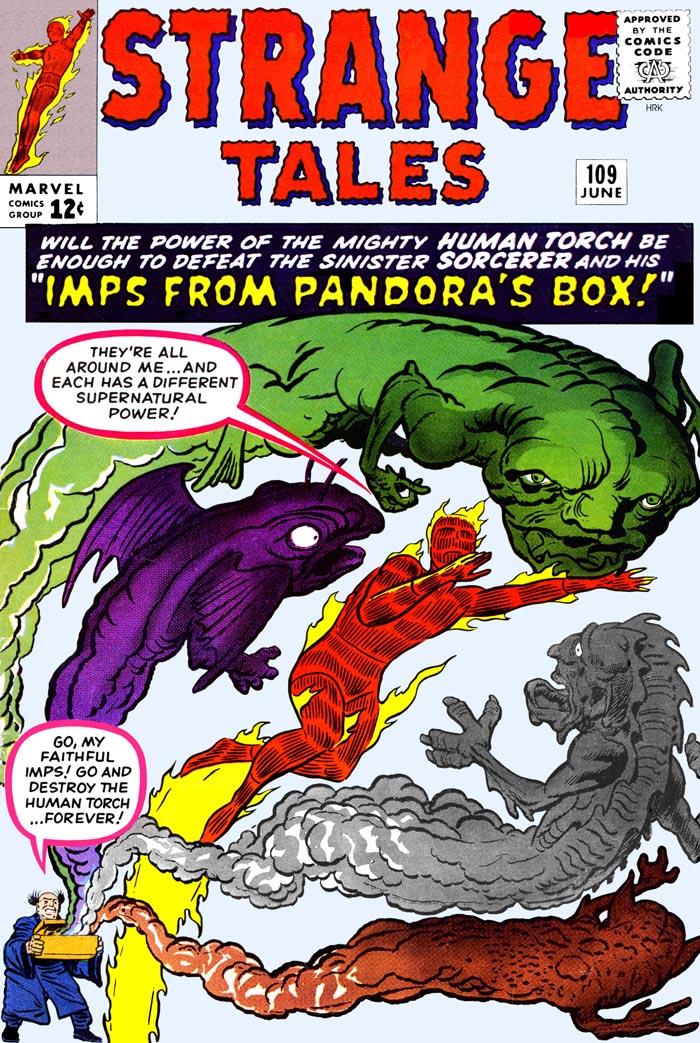 Although he'd done a few stories already, this was the point where Dick Ayers really took over the series full-time.  This particular story was the first-ever team-up of The Wizard and Paste-Pot Pete, which proved to be a lifelong partnership.  It was also written almost entirely for laughs, with dialogue by Ernie Hart, whose writing, it turns out, was a LOT funnier than Stan Lee's!

Meanwhile... you'd never guess that Steve Ditko's brand-new creation,
Dr. Strange, Master of Black Magic, debuted in this issue!  Was his
editor trying to see him fall flat on his face? 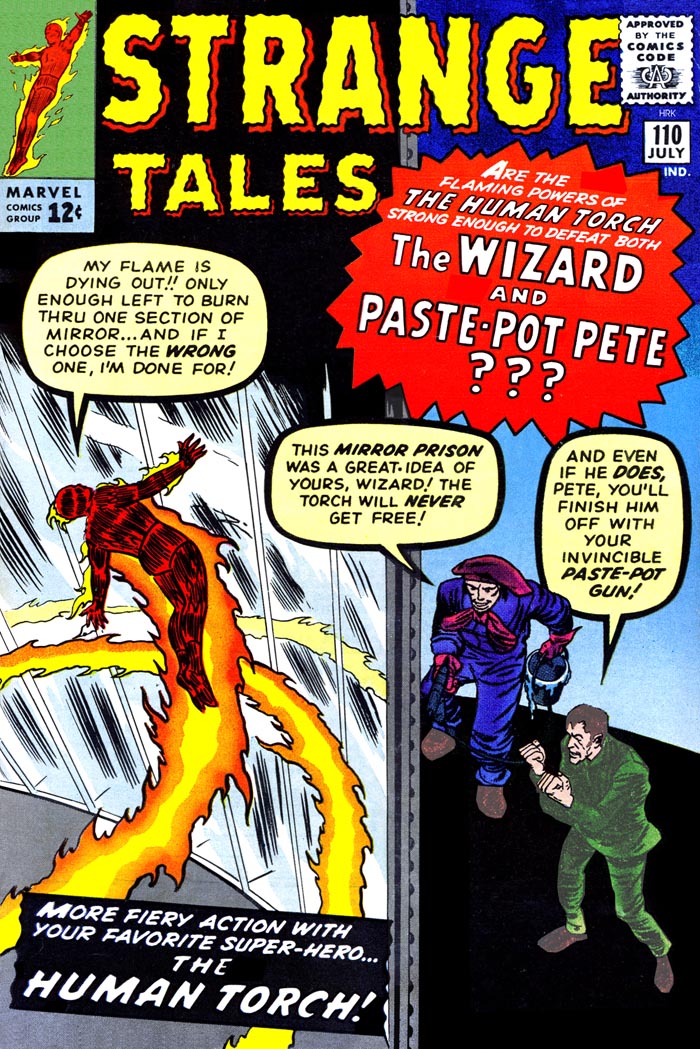